This week, Ticketmaster sold its first set of exclusively digitally-ticketed events with Rex Orange County's back-to-back sold out nights at The Olympia. The method is supposed to be more secure, as well as time- and cost-efficient.

Rex Orange County spent the last two nights performing to sold-out crowds at The Olympia, flanked by disco balls and a giant inflatable pony – homage to his most recent album, Pony. But while fans celebrated as they were showered in rainbow confetti, Ticketmaster were behind the scenes celebrating the success of their first fully digitally-ticketed gig at The Olympia.

While the venue has been using paperless tickets for over a year now, Tuesday and Wednesday nights were the first 100% digital event. Typically, the Olympia runs at about 70% digital on any given day, as compared to about 35-40% at Vicar Street and 20% at Bord Gais Energy Theatre, according to Ticketmaster.

The push towards digital ticketing is largely based on convenience for the customer, as well as the correlating environmental narrative that it reduces the paper footprint of the industry.

"Our aim at Ticketmaster is to make the ticket journey for fans as easy and frictionless as possible and digital ticketing is a major milestone on that path," said Keith English, Managing Director of Ticketmaster Ireland. "Digital ticketing takes convenience to a new level for our fans, allowing them the smoothest entry into the show."

It's also more beneficial for the event organiser, who can more accurately monitor the amount of people in the building and hasten the entry process into the venue.

"We have invested a huge amount of time and resources into making the Olympia Theatre a fantastic place to experience a show," said John Johnson, General Manager of the Olympia. "We want to provide the best possible experience for our patrons and digital ticketing fits in perfectly with meeting that ambition. We have already seen our audiences embrace it in huge numbers for quick and seamless entry."

The venue adopted paperless ticketing methods over a year ago and saw a decrease in costs, entry times, and fraud. Since then, they have worked with Ticketmaster to increase digital ticketing.

The new digitally-ticketed method is paired with a cloud-based application that tracks ticket scanning live, and allows the venue to monitor the exact number of people in the building and in which sections they are seated. While for now, the data is used for safety procedures as well as targeted messaging, the practical applications go beyond that.

"What we want to be able to give to event organisers is the ability to have a one-to-one conversation with the patrons that are actually in the building," said English. In the United States, for example, the software has been adopted by the NFL, where 97% of all games are digitally ticketed. Now, stadiums are utilising the application to direct traffic within the venue. For example, they are able to contact all attendees in a certain section to warn them of long wait times at a concession area, and redirect them to a nearby concession stand with less people queueing.

Ticketmaster have successfully ensured that the new digitally-ticketed method is in fact more secure than traditional paper or PDF bar code methods, which can easily be duplicated and scalped or lost. Their digital tickets display a moving strip at the top to ensure authenticity and can be securely distributed or transferred between users. 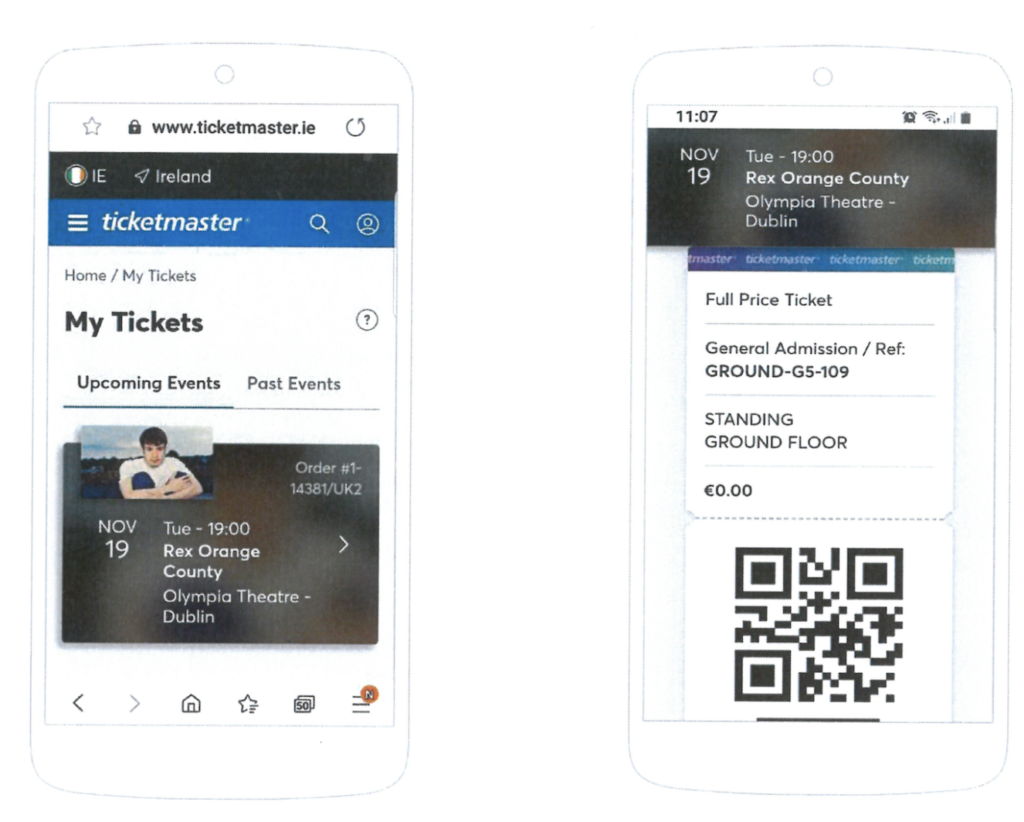 Furthermore, gone are the days of having to escort someone to a gig to whom you have gifted tickets. When gigs are digitally-ticketed, with the transfer function, the ticket purchaser can transfer a digital ticket free of charge by entering the recipient's name and email. Tickets are then securely transferred to the new account.

And for those that can no longer attend a show, the fan-to-fan ticket exchange allows the seller to recoup their costs and another fan to attend the show with their ticket, for the original price.

As for the future, both English and Johnson agree: digitally-ticketed is the way forward.

Behind The Scenes At David Keenan's Hot Press Cover Shoot
Hot Press launches The A&R Department: A new fortnightly feature on the latest Irish music scene news
Jamie Cullum talks about the highlights of his festive season ahead of his Dublin gig

Taylor Swift drops 'Miss Americana' documentary trailer
Jonas Brothers add supports to sold out "Happiness Begins" tour at 3Arena Jan. 31st
Mad Hatter: Camille O'Sullivan
New To Hot Press: KTG
In The New Hot Press: David Keenan Graces The Cover Of Our Special Hot for 2020 Issue
New To Hot Press: Fly the Nest
We use cookies to ensure you get the best experience on our web site - by using this web site you consent to our use of cookies. Read more »