For The Throne (Music Inspired by the HBO Series Game of Thrones), out on April 26, features a star-studded list of contributors.

Ahead of the highly anticipated premiere of the final season of Game of Thrones, Columbia Records and HBO have announced a new album, For The Throne (Music Inspired by the HBO Series Game of Thrones).

In 2014, Catch The Throne: The Mixtape was released to promote the series, and featured the likes of Big Boi, Wale and Common. This was followed by Catch The Throne Vol. 2, featuring Snoop Dogg, Ty Dolla $ign, Talib Kweli, Method Man and Mastodon in 2015.

The hit series returns for its eighth and final season next week. A Game of Thrones Studio Tour, at Linen Mills Studios in Banbridge, is set to open in Spring 2020.

Take a look at the full list of For The Throne's contributors below: 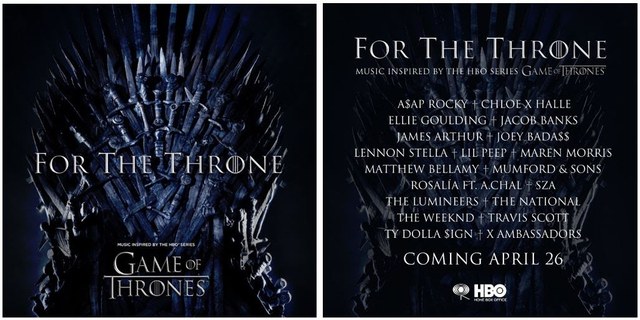