They'll have a predominantly Irish backing on their excursions – among them the hugely talented Hot Press fave, Roe from Derry.

As they gear up to tour behind their long-awaited seventh studio album Wildness, Snow Patrol have today confirmed additional support acts for the UK and Ireland legs of their upcoming travels.

Their first new material in seven years, Wildness was released back in May, with the band performing a number of shows in support of the album across Ireland that month. The Northern Irish five-piece followed up with the announcement of their more extensive forthcoming tour, which takes in a number of locations across North America and Europe, as well as some domestic arena dates.

Kodaline and Ryan McMullan were initially confirmed as support acts for the UK and Irish shows: McMullan is set to perform on the 2018 dates in Belfast and Dublin, while Kodaline are to play the 2019 dates in the UK.

The band have now confirmed that Foy Vance, Sam Felder and Roe (pictured) will also be joining them for some of the tour. 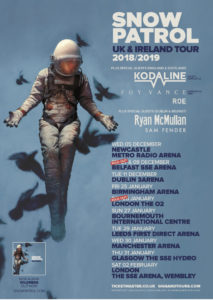 The man Snow Patrol describe as "our dear friend, the legend Foy Vance" will support them at their Newcastle show on December 5th, while the relatively new artist in Sam Fender will join McMullen in performing at both the Dublin and Belfast shows.

19-year old singer-songwriter and multi-instrumentalist, and rising Derry star, Roe will support the band across all of their UK dates. It represents a major addition to her already impressive CV, including appearances on the likes of the 'BBC Introducing' stage and at Electric Picnic.

Tickets for Snow Patrol's UK and Ireland tour and beyond can still be purchased here. Meanwhile, you can check out Roe's recent release titled 'Hey Thomas' below.

Foy Vance at the Olympia Theatre: The Blues, The Whole Blues and Nothing But The Blues
Album Review: Foy Vance, To Memphis
Playlist: Carty's Golden Hour #15

Album Review: Foy Vance, From Muscle Shoals
Playlist: Carty's Golden Hour #11
The Full Cover Story: With Snow Patrol's Gary Lightbody
Foy Vance Announces Two Albums & Tour
Bono joins Snow Patrol onstage in Bangor to sing 'One'
Ryan McMullan releases new single
We use cookies to ensure you get the best experience on our web site - by using this web site you consent to our use of cookies. Read more »