Ryan Adams:  Are You Really Such A Bloody Motherfuckin' Asshole?
Colin Sheridan

“I wish, I wish I was born a man," Martha Wainwright sang in 'Bloody Motherfuckin’ Asshole'. So she could be one, like a lot of men, was the humorous implication, amid the darkness of a song about women's vulnerability. Well, we know more about the precise nature of that vulnerability now. And maybe those assholes too. So how do we react to the recent allegations about Ryan Adams? Listening to the music some of those vulnerable women might just be a good start.

I think I owe Sufjan Stevens an apology. Around 2002, not long after he produced his magnificent breakthrough album Michigan, he declared he was going to release a record for every state in the Union. Yeah, you got it, fifty in all. It was audacious, but audacity was already the calling card of his art. Following his opus to his home state, he dropped Come on! Feel the Illinoise!, and it dawned on me that he was serious about his fifty states project.

So, I told a lot of people about it. Anybody who'd listen at college house-parties, and on road trips, and sitting atop the high stool on wet winter Saturdays. Some people bore you with what books they’ve read, others with how Manchester United are doing. Well, around 2006, I was telling anybody who’d listen that the Christian alt-rocker Sufjan Stevens was writing an album for every state in America. It was my “have you read The Slap?” moment. Looking back, I wasn’t half as much craic as I thought.

Time passed. A friend - maybe the only one who ever listened to my dirge – sent me an interview with Stevens, in which he declared the ‘50 States Project’ a ruse, nothing but a “promotional tool”. Sufjan Stevens – you bloody motherfuckin' asshole! I continued to love his music but resented him the way Italians resented Roberto Baggio for missing the penalty in the World Cup final in 1994. There was love there, but it was suddenly very conditional. He would forever have an asterisk beside his name. I stopped speaking about him to my friends.

Some years later, the same friend who broke the truth of the fifty states fraud sent me Sufjan’s Carrie and Lowell. Had it come at a different time, I probably would have tossed it in the “only when I’ve time” heap, knowing I’d never make time. But, as serendipity would have it, Sufjan’s prodigal return coincided with the only bout of (admittedly undiagnosed) insomnia I’ve ever experienced, which neatly overlapped my being in Afghanistan for six months. Willing to try anything to cure it, I self-medicated with Sufjan. It didn't work. If anything, it exacerbated it. I spent 168 nights in Kabul, I listened to Carrie and Lowell maybe 148 of them. Sometimes twice. It became a friend, a foe, a bedfellow. I guess I forgave Sufjan. I just never told him.

What was his crime anyway? To float a Hail Mary of an idea that didn’t quite land (‘quite’ being two out of 50)? Which brings me to Ryan Adams. The two artists may be contemporaries but their music contrasts significantly. Their personalities too, but more of that anon. In Kabul, Sufjan had a running mate in Adams, the artist I and many others had revered since his debut Heartbreaker in 2000.

It was this record, and his reworking of Taylor Swift's 1989 that complemented Stevens, soundtracking my sleeplessness. If Sufjan was quaint and Christian, Adams was fucked-up and going to hell. But he was real. There would be no fifty states fuck-up from him! You always knew he was an asshole, so you took his assholery as a given. He was the plumber with a heart of scrap metal. He was moody and dark, prolific and often shit (you couldn't release 17 albums in 18 years and not be quite often shit), but when he was on, he was a force of fucking nature. If you needed an imagination to appreciate Sufjan’s 'Should Have Known Better', all you needed was a pulse and a beating heart to love Adam’s 'Come Pick Me Up'.

There exists a secret between the listener and the listened to that matters most on your worst day, when you think that music was written only for you. That every motherfucker who is giving you shit, is somehow losing because they don’t get it. No matter whether you are 12 or 92: the feeling is the same. That’s what Ryan Adams nailed in his best moments. On 'La Cienega Just Smiled', on 'Oh My Sweet Carolina', even on his bizarrely brilliant reworking of Taylor Swift's 'Blank Space'. If Sufjan was telling you where John Wayne Gacy buried the bodies, Ryan Adams was telling you how to get out of bed and face the day.

But now, here we are, just over a month on from the New York Times article that tells a depressing story of the depth of Ryan Adams’s assholery, detailing how he allegedly abused the trust of young musicians he pursued, as well as his ex-wife Mandy Moore, who has claimed – with fairly damning evidence – that Adams psychologically bullied her and deliberately stymied her career. Worst of all, there were allegations of inappropriate contact with a minor. He has just cancelled his upcoming tour, which of course proves nothing. But when you read the allegations, they feel too much like the truth for comfort.

Suddenly Adams looks less like the tortured genius who’s got a really good heart, but just can’t catch a break, and more like a troubadour demagogue who can pen a great tune but is a really shitty person. Perhaps even dangerously so, if that contact with a minor starts to look as bad as it might. Ryan Adams is on the verge of being cancelled himself, because, let’s face it, the last thing the world needs is another forty-something creeping on (very) young talent. Sufjan’s crimes of over-promising by comparison, suddenly seem rather forgivable.

Bad behaviour by powerful male musicians is hardly anything new. And the reckoning that arrived at Hollywood’s door with the #metoo movement has yet to properly present itself in the music industry. As the open secret of R Kelly proved, it’s a business that's much more tolerant of its difficult talent than most. Until now.

Adams-the-ego may erroneously argue that he is somehow unlucky. That, after a half-century of the most hedonistic behaviour of his predecessors being lionised as the “stuff of legend”, he should happen upon the #metoo generation. There is a good chance his supporting cast of sycophants who prop him up and ensure his genius is sated, are reinforcing this fallacy of poor timing. If he is thinking this, well, his road to redemption will be short, and end in a sink hole.

Amongst his accusers is the singer-songwriter Phoebe Bridgers. This is a shame on a myriad of levels – not least because, from this listeners remove, her music is brilliant, and for her to be in any way defined by this story does her a chronic injustice. That people might come to know her through the Adams paradigm would be typical of an already unjustly balanced musical ecosystem, which has always managed to undervalue and marginalise its female performers. For them all, this could be a seminal moment. For Karen O and her Yeah Yeah Yeahs, for Sharon van Etten, Martha Wainwright, St Vincent, Laura Marling; and for The Staves, for Múm and for First Aid Kit. For Carol Keogh. And for Lisa Hannigan, who has endured a decade of answering questions about her ex-boyfriend instead of talking about her talent. 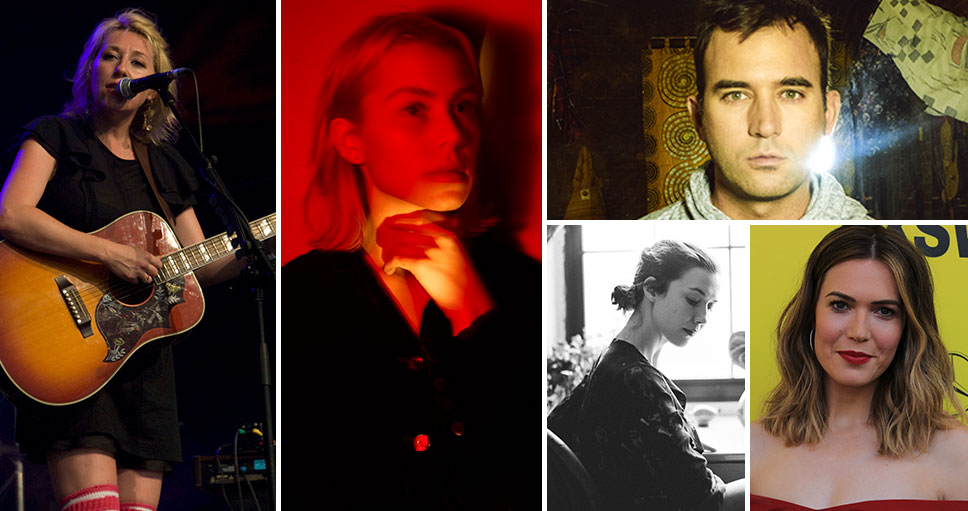 None of the music these women make exists to get a Super Bowl half-time show. It does exist to be listened to and judged on exactly the same basis as the music of their male counterparts. Chances are many of the artists mentioned above may have had to encounter similar behaviour to that attributed to Adams, during their careers. Looked at from our current standpoint, that Moore, Bridgers et al had the nerve to stand up to Adams speaks, hopefully at least, to a shift in the zeitgeist, away from the assumption that just because it has always been so, it is what it is, and shall always remain so.

Which leaves the rest of us to figure out what to do about the records. It's perhaps too soon to cancel Ryan Adams: maybe he is just a motherfuckin’ asshole. But now may be the time to invest in Phoebe Bridgers, Laura Marling and Sharon van Etten. Not as part of some condescending positive- discriminatory act of self-righteousness, but rather because their music is motherfuckin' outstanding, and is guaranteed to keep you awake at night.

As for you Sufjan? Sleep well, kid, you’re off the hook.

'I stand with everyone who came forward': Phoebe Bridgers makes statement of support for Marilyn Manson accusers
Evan Rachel Wood accuses Marilyn Manson of grooming and "horrific abuse"
Ryan Adams "cleared" of sexting underage fan following FBI investigation
Justin Bieber denies accusations of sexual assault by two women
Miley Cyrus speaks out against person who tried to grab her
Interview: Corin Tucker from Filthy Friends
We use cookies to ensure you get the best experience on our web site - by using this web site you consent to our use of cookies. Read more »