'Sunlight' uses what’s up above to describe the feelings within: "Sunlight is our life force. The bringer of happiness. The colour in the world. In this song, sunlight is embodied in the one I love and yearn for," Coleman explains.

Arn.’s penchant for writing infectious pop hooks and his borderless aesthetic is challenging any preconceived notions of what it means to be an artist from rural Ireland. Fast becoming a King of DIY indie bangers in his homeland, his diet of being raised on classic rock and The Dubliners as a child is shining through.

He inhaled hundreds of hours of seminal records on family road trips to Waterford and fed his fascination for driving pop hits through looping VCR clips of Enrique Iglesias as a child on the weekends. 'Sunlight' is no exception, full of life and emboldened by funky, groovy melodies and playful electronics.

"Your sunlight graces my eyes, yeah, leaving me blind," Arn. croons on the track, embracing the joy of writing love/lust songs. The visuals take inspiration from interspersed weather reporting clips, without taking himself too seriously.

"'Sunlight' was the first song I ever wrote on my own," Arn. tells me. "I recorded a version a few years ago and it sounded like utter dogshit. It was inspired by just being pure horned up and fancying my doll. She’s class. But aye, that good love music."

"It took around 5 hours in total to film, between in front of a huge green screen and out the back of my mobile. Editing wise, David McIntyre FLEW through that." 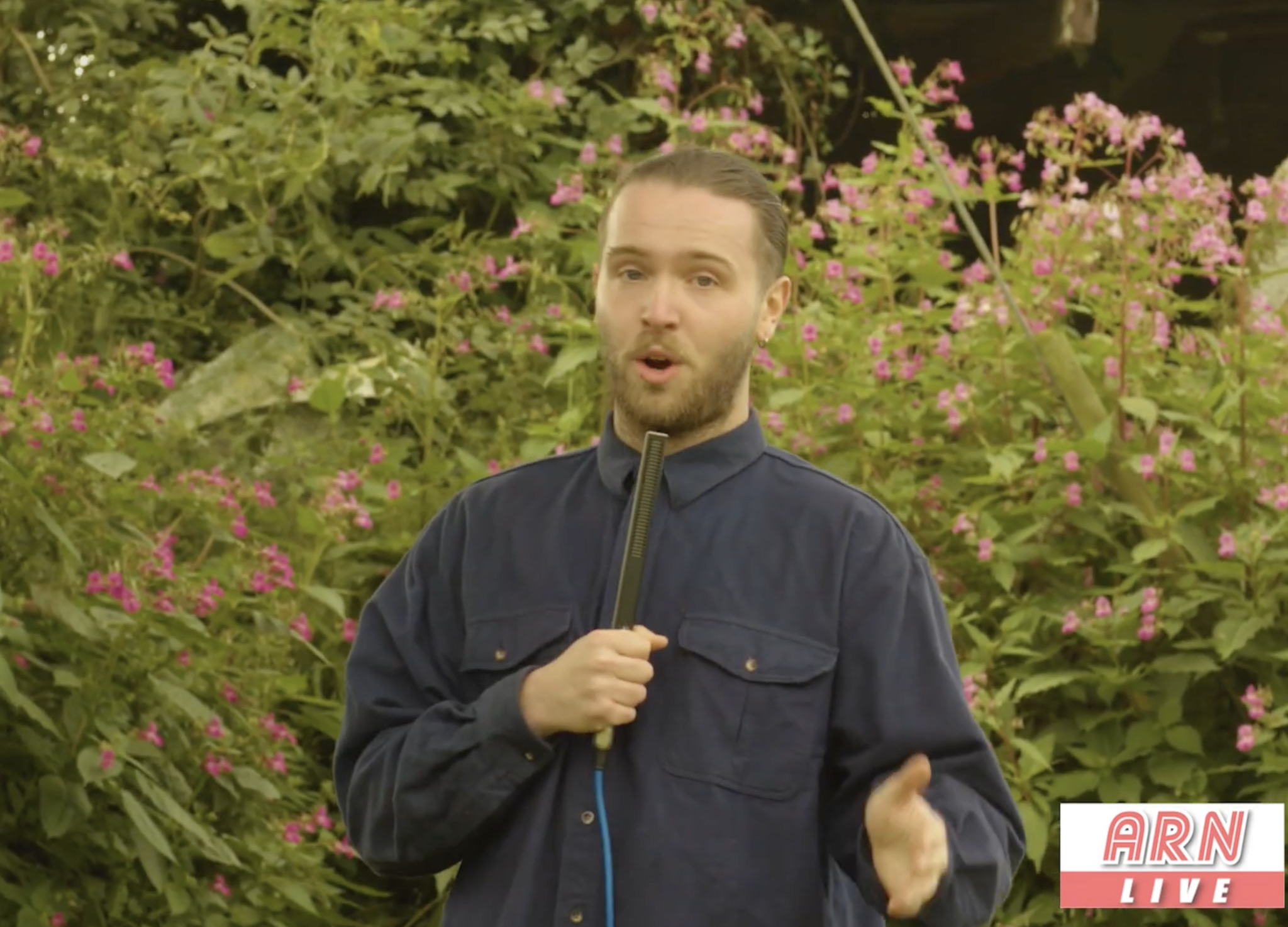 Arn. in the video for 'Sunlight'.

Does Aaron have a favourite Irish meteorologist?

"There’s only one weather reporter to me and that’s Mr. Frostbit. I met him once in a bar and I said ‘up the Ra’ and he said in his fantastic accent, 'Aw ya cyan’t say that'," Arn. insists. No receipts needed, Frostbit Boy remains an Irish icon.

As his taste developed and the challenges of adolescence unfolded, Arn. found solace in the musical recommendations of his brother - blaring Slipknot, Wu Tang Clan, Korn and early pop-punk heroes like Paramore through his bedroom speakers. Channeling his teenage angst into visceral and emotive records that would come to inform his heart-on-his-sleeve songwriting, the rising act has developed a unique way of borrowing from music before his time and transforming it into future nostalgia indie earworms.

With a discography that shares DNA with the bedroom-pop textures of Clairo and the hook game of indie highflyer Remi Wolf; Arn. is developing a reputation as an act crafting infectious cuts on his own terms. Hot Press notes the comparisons between fellow playful DIY King Jack Dora, who brings contemporary instrumentation and funky flare to Bruce Springsteen-informed cuts.

“My surroundings informed me what I’m doing now, because I didn’t want to do country," Arn. says. "I didn’t want my music to be a direct association of where I’m from. It was the things that weren’t from where I’m from that moulded my taste of music. I was releasing a song every two weeks at the start of 2021. I did like 11 I think. That was me on overdrive. It was fun, the creative flow never lapsed but I had no time to do any other music content such as music videos. Had to stop then to focus on the bigger picture.”

With several singles under his belt and a desire to bring Letterkenny to the masses, Arn. is gearing up to be next up on Ireland’s conveyor belt of indie trailblazers.

"Future plans would be to play all over Ireland and eventually the world," he adds of his 2023 goals. "One place I’d love to play would be the Academy. I was at the 2015 Kerrang tour there and it was just immense. The stage looks pure class. This is truly all I want to do so this is the plan. I've been toying about with a few songs and I’ve had a solid concept nailed down for an EP for a long time. We’ll see what happens. More gigs announced, with a multitude of cans, soon."

You heard it here first, people. Stay hydrated out there.

Check out the new video for 'Sunlight' below.

On Our Radar Q&A - Arn: "Playing live is like a drug! It’s absolutely all I’ve ever wanted to do"
Electro-pop duo Mr. Muntz share new video for debut single ‘Sunlight’
CMAT adds Junior Brother to the bill for Limerick, Cork and Dublin dates