People Have The Power: The Damien Dempsey Interview
Miguel Ruiz/hotpress.com
By: Pat Carty

With his new duets album, Union, Damien Dempsey’s King Harvest may finally have come. He sat down with us to talk about the record as well as tradition, diversity, Peter Casey – and the Irish tribe. Interview: Pat Carty Photography: Miguel Ruiz

Damien Dempsey is a big man. All on his own, he’s an imposing presence, indicative of the power he holds over a live audience. Speak to any of his many fans and they’ll get misty-eyed about the love and connection they feel with him – he’s an honest man, the real thing.

But on his new album Union, Damien stands shoulder to shoulder with 14 other singers, delivering a series of duets which underline just how far he has come as an artist. He is no less imposing in illustrious company, with Imelda May, Sinéad O’Connor, Finbar Furey and Kate Tempest among those who step up to the mic alongside him. Was there a wish-list of helpers he was after, in preparing the album?

“Around the Soulsun album, Sony wanted ‘Big Big Love’ with Imelda May for a single,” he explains in that unmistakable clipped Dublin accent, “with a couple of other collaborations on there too. We already had loads, so they suggested a full LP. We got some new people in and wrote a number of new songs. We did make a wish-list – and these are the ones who got back to us.”

It must have been a huge thrill to work with Finbar Furey, who Dempsey has cited in the past as a major hero.

“That was incredible,” smiles the singer, recalling the collaboration. “It was a beautiful sunny day in the Dublin foothills, in his back garden. He had his his top off, and he was just singing away while playing the banjo.”

The subject matter of ‘Singing Bird’ – the Irish labour leader, Jim Larkin, who was central to the workers’ rising that led to the infamous Dublin Lockout of 1913 – was close to Damo’s heart.

“I’d heard the song from Sinead O’Connor,” he says. “It’s on her Sean-Nós Nua album. Finbar sang it so beautifully, I just started singing along. When he told me the story of Jim Larkin, I thought, ‘This is the one’.”

A lot of people seem to react with undisguised hostility to anything Sinead does – can Damien fathom that?

“There’s people don’t like other people putting their head above the parapet and saying things, and thinking things, that might be outside the box,” he reckons. “A lot of people just don’t like rebels.”

O’Connor joins him for ‘Celtic Tiger’, which Dempsey says was, “originally from 2003, although it wasn’t very popular at the time. It was at the height of things and people were all, ‘What are you singing about that for?’”

“I think they let these booms happen and then just pull the rug,” muses the singer. “I definitely think they’re deliberately constructed. There are good people in the government, but a lot of them are puppets, and they wouldn’t have the intellect to see it. Or maybe they don’t care: they’re happy enough with what they have, and they don’t give a shit.”

A woman gets done for opening a can of Pringles, but the people who sank the country are still walking around.

“Yeah, exactly,” nods Damien. “It was the same thing when I wrote that song. A homeless kid stole a jacket: they put him in Mountjoy and he hung himself. Meanwhile, there was all this money around. Back in the ‘30s and ‘40s, the Government had no money, but they were building huge housing schemes around the country. Now they’re saying everyone should be able to buy a house – it’s a crazy attitude, which is why we have to get out and march.”

...For What Shall It Profit A Man?

There are times when it makes sense to look to the past to know how we might best shape for the future. It is a perspective which shines through at vital moments on Union. ‘Gaelic Ireland’, for example, talks about going back to a belief system that existed in the country before the modern Christian – later Catholic – church arrived.

What about atheism? “I don’t think atheism is a natural state,” he observes. “Irish people were always very spiritual, but Christianity cut us off from nature, with this place in the clouds we’re all supposed to aspire to. If you look at indigenous people, like the First Nation people (the aboriginals of Canada), they’re grounded in Mother Earth.”

Which ties in with Damien’s reaction to the Celtic Tiger: you can gain the whole world, but lose your soul, in all this rampant greed and consumerism.

“We always looked after the tribe in the old days,” he reflects. “Everybody in the tribe had one thing they were better at, to benefit the tribe. I think schools should see what a kid is good at and push them towards that – as I was told is done in New Zealand. They looked after the tribe back then and, in Ireland now, it’s just ‘Fuck them, let them go homeless and starve.’” 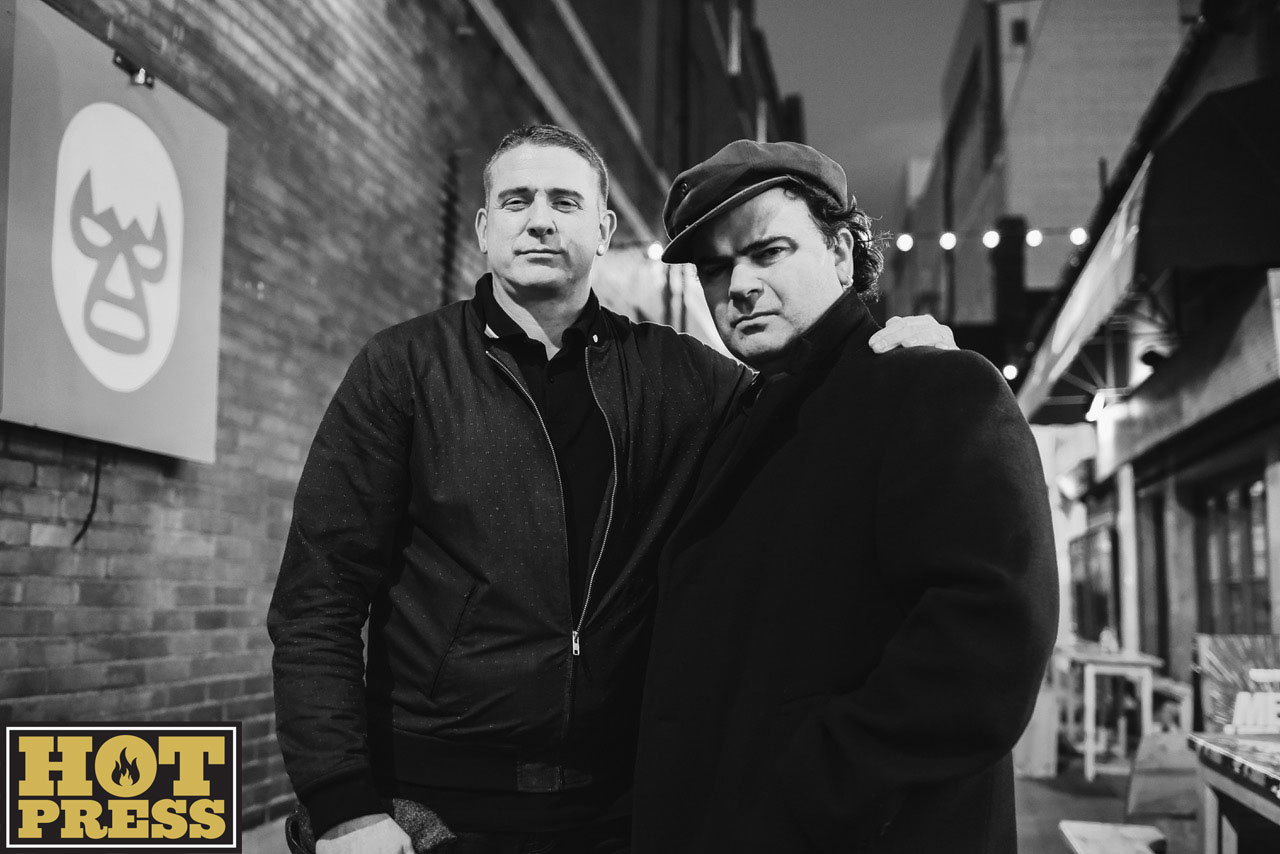 "Sorry, pal. If your name isn't on the list, you're not coming in."

They say Dublin is a small place, and thus it was that Tommy Tiernan – considered by many to be Ireland’s greatest comedian and a three-time cover star of Hot Press – approached our corner to say hello to his old pal. Spotting the HP microphone, Tommy quickly fabricated a tale concerning two men and a load of yokes in Carlingford, which was both funny and entirely unbelievable. We were then accosted by an old dear from the next table, wanting to know who Damien was, and if the CDs on the table were of a country music tincture. It turned out she was from my hometown. After rolling out a litany of names from the locality, which I didn’t recognise, she reluctantly went back to her tea. Unlike Dublin, Tullamore is a big place...

“They think like Peter Casey – and that’s a big problem.”

The idea of the tribe is an important touchstone for Damien Dempsey. However, he sees it in an inclusive way. ‘Keepers Of The Flame’ describes the travelling community’s vital role in maintaining Ireland’s oral and musical traditions.

“We could learn a lot from some of the culture of the travelling community,” he says. “It’s ‘tuatha’, the old Gaelic idea of the family living around, and supporting, one another. Nowadays, even with my friends in Donaghmede, they all had to move. Communities just get smashed up when house prices rise.”

Peter Casey’s remarks on the travelling community during the Presidential election must have particularly rankled. Was the Dragons’ Den candidate using the Trump technique of pandering to people’s prejudices?

“I think he doesn’t know any travellers, so he’s going on what he reads in the media,” Damien speculates. “Because I’m from the edge of Dublin, and I was involved in boxing as well, I was around travellers growing up. It’s totally different when you get to know them. When people don’t know any of them personally, and only get their information from the news, they think like Peter Casey – and that’s a big problem. It gave him notoriety and attention.

“There are criminals and violent people in the settled community too,” he adds. “The wealthiest people are paying the least tax. I don’t hear Peter Casey saying anything about them.”

Compared to the public service of someone like Michael D. Higgins, owning a business hardly qualifies you for the Presidency. “Yeah, Higgins has spent all his life fighting for people, and for artists’ rights,” Damien says.

A heavily reggae-influenced tune, ‘It’s Important’ refers to the Aboriginal songlines tradition, and the indigenous Australians’ ability to navigate the landscape with song. It’s a notion that’s hard for us to grasp.

“It is very hard to explain, it’s like a wonder of the world,” Damien says of this animist belief system. “And maybe the aboriginals, the oldest culture on Earth, there for 40-60,000 years, would have a problem if there were some scientific investigation into it, trying to make sense of something that’s spiritual and magical. They don’t want to blow it open.”

The influence of reggae was in evidence from Damien’s first album, They Don’t Teach This Shit In School. Why does Jamaican music resonate so powerfully with him?

“It comes from a brutal colonial background,” he offers, “and they’ve turned that around into something beautiful and positive. We have a similar history and our music has these great uplifting tunes and ballads. It’s rebel music: a rebellion against the powers that be – and it just clicked and lifted me.”

“I know all there is to know about the crying game…”

“She was just coming out of a break-up,” Damien remembers. “She was crying when she heard the song, but she sang and performed it with every fibre of her being. She has always just kept going and going. It was hard financially, but I think she’d still be doing it, even if she didn’t break through. For me, music is not about videos or chart positions or radio play, it’s about healing and community and positivity and hope. It’s a way of life.”

Was there ever a point where finances made him think about hanging it up?

Imelda May wasn’t the only one getting the hanky out: John Grant’s emotions got the better of him too.

“John sings with great passion and his songs are so different, totally original,” Damien says. “A song like ‘Glacier’ is just amazing. he’s a poet. I wasn’t there, but he was crying when he did ‘Soulsun’ as well. I think he came in to meet my producer, John Reynolds, in London and Reynolds gave him the Almighty Love record. John then wrote me a letter about what the song ‘Chris and Stevie’ meant to him. I sang on one of his records (2013’s Gets Schooled EP) – we did ‘You Don’t Have To’, a great song.”

So what else is on the horizon for Damien Dempsey?

“There’s talk of a musical based on the songs,” he says. “A playwright and a director approached me. They’d do the main story and I’d come in with ideas.”

You’ve done a bit of acting, I prompt: you could be in it.

“No, I wouldn’t do that,” Damien smiles. Just sit back and let the money roll in? “Exactly, I’d be like Brendan Behan – go to the show drunk and heckle them!”

Damien Dempsey’s Union is out now on Sony Music.

BCFE to host a showcase at Workman's Club to benefit the Dublin Rape Crisis Centre
Frontlines: We have found our voice
Live Report: Damien Dempsey Makes His Triumphant Return To Vicar Street

Sinéad O'Connor announces major gigs in Cork, Belfast and Dublin
Watch: Damien Dempsey performs 'Serious' at Iveagh Gardens
Power to the People: Irish Protest Music over the Years
Damien Dempsey announces Iveagh Gardens gig next summer
Album Review: Black Bank Folk, Last Star Fall
Metallica, Therapy? and more pay tribute to Philomena Lynott
We use cookies to ensure you get the best experience on our web site - by using this web site you consent to our use of cookies. Read more »