First notes in, ya can't mistake it.

Yeah, and since this is the first set of original statements in that long, it should be fairly bristling with new ideas, especially since it also features a new and apparently stable line-up. But, sez the fella, the newest newcomer is Gary Moore who's on his second time around as a member of Lizzy. The new is, shall we say, not so new....Plus sa change, plus sa meme. So too with the music.

And if one is to judge by remarks in some of the British papers, this familiarity is breeding something that looks unwholesomely akin to contempt. Well, maybe not yet - Lizzy still hold far too much corner credibility for contempt, but there's an unmistakable implication in reviews that if they continue to coast, that critical carping will intensify.

You see, the thing about Black Rose is that, by and large, what it delivers is a series of Lizzy archetypes, in terms of music, riffs, solos, images and lyrics. At all points the album sounds familiar, even to spots where you think it's one of the Live and Dangerous set. It's lizzy-LIZZY and by now you know nearly all the moves.

At the same time, though, like honey or poitin, a good formula deserves to last. Even where Lizzy re-tread their streets, it's still mighty listening. The question is, does it do their potential justice? See, on two occasions in the last decade with 'The Boys Are Back In Town', and its album Jailbreak, and then with Live and Dangerous, Lizzy were and seemed on the edge of commercial acceptance, as the world's numero uno hard-rock band. The boyos to be to the late 70's and 80's what the Stones were to the late 60's and 70's. And despite the degeneration of the Stones in '76 and '77, they were once the THE ROCK N' ROLL BAND TO BEAT - and that's the level the stakes were at.

Now, whether or not Valentino gambled his all, and won or lost..these are the questions.

And to come to terms with the possibility that Lizzy may have opted for safety this time out, ya have to remember their ill-starred history. For a long time it took all their wiles to even survive, not to mention taking chances on the music. They had already weathered the traumas of Eric Bell's and Gary Moore's departures, and were heading for annihilation at the hands of the creditors when last-throw-of-the-dice Jailbreak saved the band. Then there was the consolidating, but musically less important Johnny The Fox, accompanied by the ongoing "difficulties" with Brian Robertson, then Bad Reputation, no Jailbreak either, before the obvious step of recording what had turned out to be the most awesome live set played by anyone anywhere in the Western World.

And even that was dogged by bad luck and trouble, with Robertson's final departure and Downey's "holiday".

So are they to live in its shadow forever? Aaah..well..as their sleeve notes say, "the past my be forgotten but it never dies"...Lizzy's myth, tradition, legend, survives.

Black Rose marks no major departure. Their imagery and sound are crystallised, they have assumed their longterm shape and substance and now only tolerate minor variations. 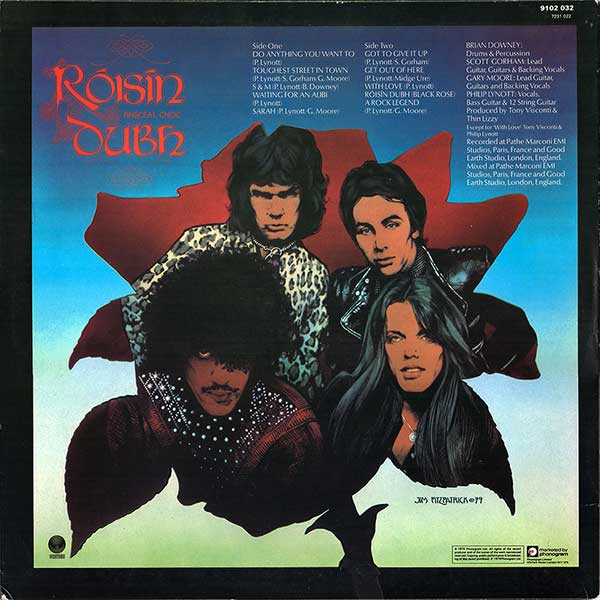 The images-formula has three main ingredients: sci-fi Heavy metal-Romantic Past or Romantic Future (or both combined); Tuff Streets- Good-Guys-Don't-Wear-White, and Love- light macho or lonely romantic. Personally I've always regretted that the precision honed later Lizzy couldn't accommodate pieces of genius like 'Randolph's Tango', but then the killer instinct was up. And when Lynott was reported to be working on a solo album, the word was that it'd include this kind of 'non-Lizzy' material. Anyhow, what has happened here is that a Randolph-type character, the romantic gambler Valentino, has been made to fit Lizzy's gallery of character/images, and their sound.

Yeah, the sound has crystallised too, defined itself, taken its shape and marked out its limitations.

There's hard-rock Quo boogying combined and...ah...Romantic prettiness, heavy-metal riffs, twin guitars and syncopations. Since they do it great, and since Lynott doesn't sing like a castrated cat (check out Led Zeppelin, Rush or Judas Priest), we can only applaud them - they really are the best. But still-an'-all, they've defined their borders over the last few years and Black Rose does little to extend them.

A poppier feel insinuates itself here and there, seemingly by design, where it was only coincidental on Jailbreak - and Gary Moore's excellent mid-Atlantic harmonies and answering vocals add a whole extra side to the music. Again, a major factor here must be Lizzy's current commercial position - this one has to sell well in America, and the songs look as though they're just radio-right. And anyway, if there is a HM-hard rock/pop crossover to be made and defined, who better than Lizzy to do it? This way class is assured.

'Do Anything You Want To', which says what it seems to, is simple. The chord changes and the guitar lines, with the solo echoing the chorus- strong and accessible it sounds like a biggie for AM radio...tho' what the "Elvis Is Dead" talkunder at the end is all about I can't say. Seems just an offhand insert which means nothing. 'Toughest Street In Town' extends it, with the same kind of triple and quadruple rhyming quicklines, the classic Lizziness of the sound and the Americanny chorus. BUT the solo seems like a Live and Dangerous outtake...

'S & M' chatters in funky percussion. Is it a joke? I can smile, but I'm not into it. It doesn't come to terms with its subject. Then, again, 'Waiting For An Alibi' does – a great single, a sharply focused three-minute burst of accessible power- Lizzy in a nutshell.

'Sarah', closing side one, a lonesome love song, is a sudden change - gentle, acoustic, with almost Beatley harmonies and (I'd say) Gary Moore's guitar flourishes. But the break is most electric - almost synthesised. A nice blend of instrumental sound, lyrically attractive, but simple, quick-changing chords - not heavy metal clangers. Yet it marks no great advance on anything that has gone before.

'Got To Give It Up', on Side Two, reworks the old blues theme of 'Going Down Slow', and sounds awful close to a lot of older stuff like Jailbreak - Lynott's "Momma I'm coming home" at the end sounds positively spoilt! 'Get Out of Here', co-written by Lynott and Rich Kid Midge Ure, has real aggression in the solo, and nice Rich Lizzy Kids climbing chords. 'With Love' comes across as lonely and tired, almost depressed – "It's a tedious existence laying your love on the line"..."This Casanova's roving days are over more or less..." Like 'Still In Love With You' it draws you into its sadness.

All of which brings us to the lengthy title track- 'Roisin Dubh (Black Rose) A Rock Legend'. The inner sleeve comes complete with a definition of the word legend, a quote from Myths and Legends Of The Celtic Race to the effect that the past moulds the present - i.e legends are very relevant to an understanding of today, an explanation of the references in the second verse of the song to "Young Cuchulainn, how his eyes were dark and his expression sullen", and finally a note on the original Roisin Dubh, the Gaelic poem.

One hopes that the research into the music was more thorough than the sleeve proof-reading, since the 19th century translator is named as James Clarence Mrogan (sic), but...well, 'Shenandoah', 'Will Ye Go Lassie Go' and 'The Derry Air' aren't exactly the most illuminating music when it comes to the Irish character, however well they're played. Mind you, the rest of the track where the jigs and reels and martial airs move in is very strong, and, more importantly, sounds natural.

But the question must be, why?

Lynott has often in the past referred to his Irish background and the deep influence it's had on him - he was a frequent attender at traditional music sessions when he lived in Dublin (something worthy of emulation by his 1979 successors here) and all through Lizzy's music this provided an often hidden but still potent backbone to the riffing. Yet, so far as I can recall, Lynott has never addressed himself so directly to his Irishness, and the wonder is, after hearing it, that it seems so....calm.

It's not that it's MOR, or anything like that - but the brooding intensity, the love-hate, the fire, the brimstone, the anger so familiar among other emigre Irish artists is absent, and there is instead- almost a nostalgia, a backward look at a more innocent Heroic Age. And I guess, since modern Ireland isn't much to write home about, much less to make an album about, one can understand the emphasis on a time when there was more glory and less pettiness. But are the 'Irish' warriors or shopkeepers and small farmers?

At the same time, even if his picture of Ireland is not black but rosy, Lynott is working out his commitment to the place and, more importantly I suspect, the people. It's not just that it's lyrically necessary to find new fields to explore - he's got his debts to pay.

But for the record, Romanticism doesn't have to be confined to the archetypes that Lizzy have patented- the Gamblers, the Ancient, Space and Street Warriors and Amazonian Women. Dylan made his wife the subject of Romanticism in Blood On The Tracks, Van Morrison did his on Tupelo Honey amongst other works (the man breathes a romantic vision), and in a way, familial love of another kind got a vital airing, let's say, a place in the romantic ethos, in Bruce Springsteen's Raised A Cain. Romance is only limited by vision.

(As is the playing concept- like Quo, with possibly less individualist flair than Lizzy, can come up with brilliant ideas like their 'Rockin' All Over The World' and 'Again and Again' tours...Rory Gallagher has his commitment to the blues, the life of an itinerant performer , and the celebrative communion of a good gig...and so on.)

But while Black Rose works well within the confines Lizzy seem to have accepted for themselves, I still worry about whether they're outta touch with Ireland. I choked on Lynott's ad libbing at the end when he says "Dark Rosaleen Is My Colleen". Gawd! Top that? Yeh he then says "Van Is The Man"..!!

And then..."It's a long way from Tipperary". It's even further from Kildare Road, man!

P.S. Just in case it is not clear amid any to-ing and fro-ing there, I really like this album. It's a topflight rock n' roll album from one of the best bands in the world containing two or three hit singles, probably in America too. There's some of the best guitar playing around, some of the hardest band rocking too. Great hard rock. It's just that I'm a bit nonplussed here and there.