Live Report: Two nights of The Road To The Great Escape at Whelan's with The Scratch, Baby Queen, Kynsy and more
Eli Smart at Whelans for The Road into the Great Escape. Photo by Riley Glaister-Ryder

Last night marked the end of this year’s Dublin live music showcase, The Road To The Great Escape, featuring some of TGE’s soaring talents. Held across various venues around the city, Whelans hit the variety jackpot with sets from The Scratch, Kynsy, Baby Queen, Stone and more.

Night one of The Road To The Great Escape in Whelan's kicked off in riotous taste.

Ulrich brothers Layne and Miles, together known as Taipei Houston, didn’t look like much from the jump: it was just the two of them, with Layne on bass and vocals and Miles behind the drums. They couldn’t care to be subtle about defying expectations; their sound was expansive. Miles destroyed the drums with his own guitar recordings functioning as a backing track, proving that there is nothing missing from Taipei Houston's deceiving appearance. The highlight of their set was a virtuosic cover of The Beatles’ ‘Eleanor Rigby,’ which sounded almost nothing like the original, making it all the more memorable. The brothers have yet to put anything out on streaming services, but Miles let on that they “just finished recording a debut album.” Their own unreleased song ‘Respecter’ was an intensely broody and overflowing spectacle. The dynamite duo handed in the kind of breathless performance that left both drummer and audience heaving for air, but hopeful in Taipei Houston's potential to bring back a sound that many mourn the loss of. 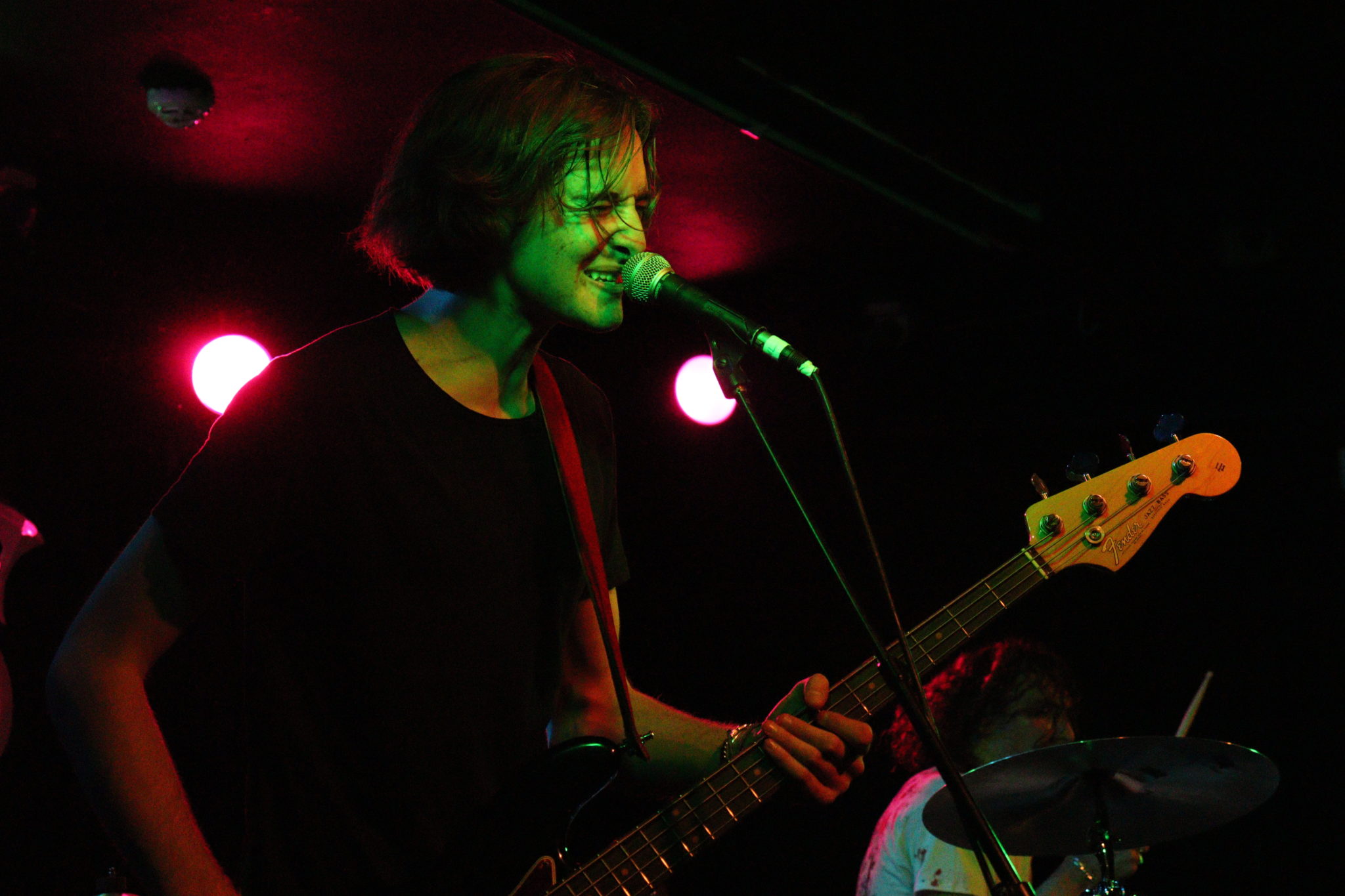 Taipei Houston at Whelans for The Road into the Great Escape. Photo by Riley Glaister-Ryder

Every songwriter has something to get off their chest, but Stone vocalist Fin Power has the impassioned persona for delivering sharp, cutting messages about Gen-Z culture and the digital age. Hailing from Liverpool, the four-piece sauntered onto the stage and dove into a gritty, reverb-saturated, ringing operation. As a vocalist, Power was part-singer, part-spoken word poet, dipping into a charged conversational tone before escalating into fitting post-punk beastial rage. Their instrumentals were so in sync it was almost an assault; Power had the vocal prowess to jive with their unprincipled sound, tackling complex issues from the evils of social media to the pain of growing up. He was sarcastic more often than not, proclaiming on ‘Stupid,’ “I don’t need you to help me, I can handle things myself with some change in my pockets and some lyrics on my shelf.” Despite the hardy, alarming riffs from energetic guitarist Elliot Gill, Stone produced post-punk music you can dance to – a realisation the crowd picked up on quickly. 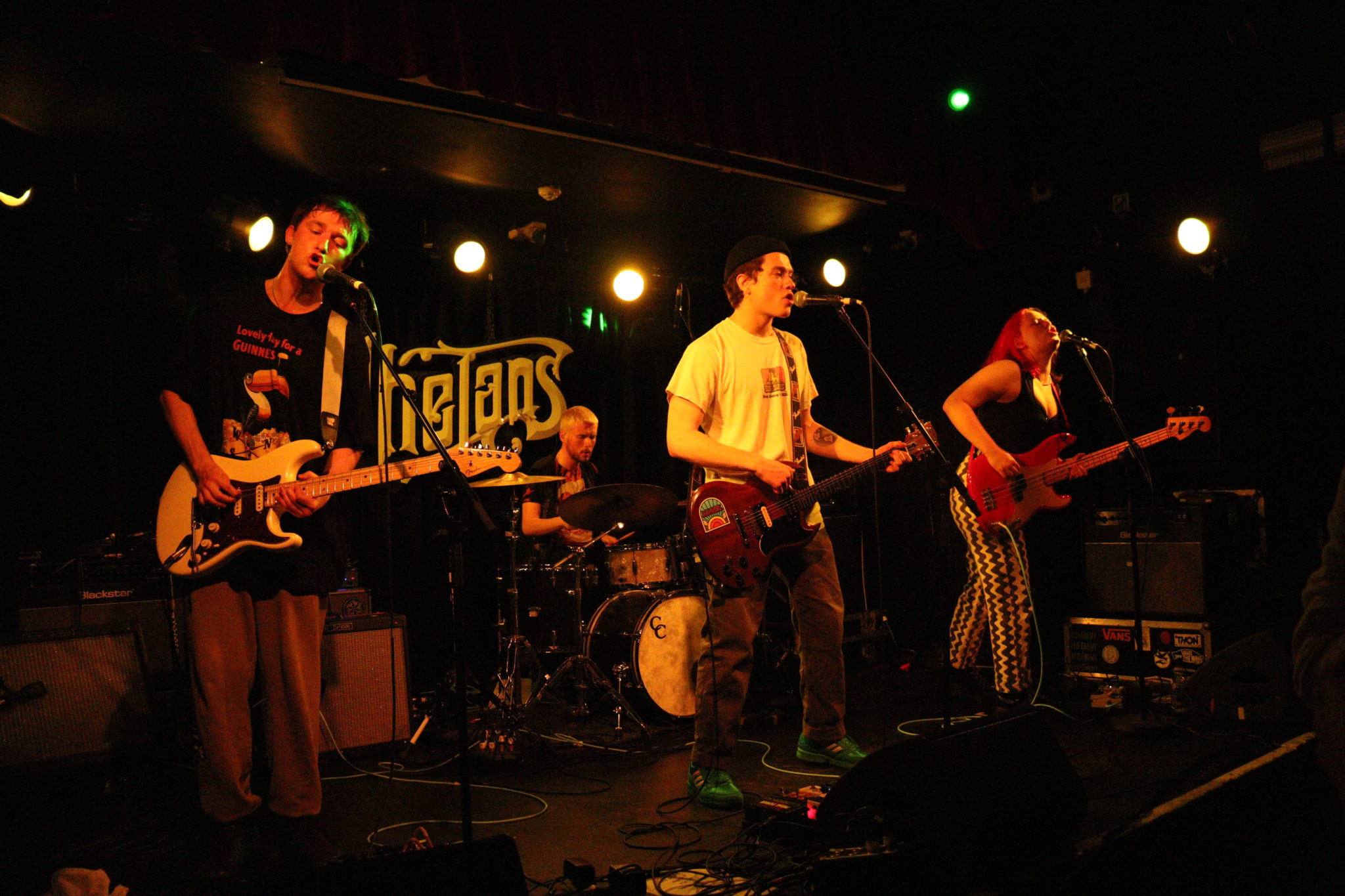 Stone at Whelans for The Road into the Great Escape.

The last performance started even before The Scratch took to the stage. A noticeable energy shift aerated through Whelan's that brought masses to the forefront, crowding every corner of the dimly lit space. By the time the Dublin quartet sat down for their acoustic set, the crowd was strident, with many loyal fans sporting merchandise from The Scratch’s previous shows. The Scratch gave off the energy of a heavy metal set, yet I was most thrown by the acute harmony of their layered vocals and driving instrumentals. Guitarist Dock was lightning quick on the strings, making a weapon out of an acoustic guitar, while vocalist/cajun player Lango established a rhythm so vigorous I half expected the stage to cave in. They mirrored the energy of their ungovernable crowd at all points, directing everyone to “Put those jumpers to good use!” during lively fan-favourite ‘Pull Your Jocks Up.' Despite a short half-hour set, The Scratch left behind a buzzing vivacity for everyone in earshot.

Right back at it on Tuesday night, Hawaiian boy Eli Smart and his entourage set the vibe right with tropical-infused indie-soul and an undeniably infectious energy. He sat down with a steel guitar (in true island style) for ‘AM to PM,’ Smart’s latest single - an unexpected blend of soulful tropicana meets Prince vocal tenor. They looked the part of sunkissed and carefree, nostalgia-inducing youthfulness; an unhappy chord progression did not seem to exist for Smart and his five-some band as they floated from the sublimeness of ‘No Destination,’ full of toned-down textured reverb, into the jivier ‘Highschool Steady.’ Smart put his instrumental skills on display, capping the set off with ‘Come on, Come on, Come on,’ and drawing out a prickling electric guitar solo. 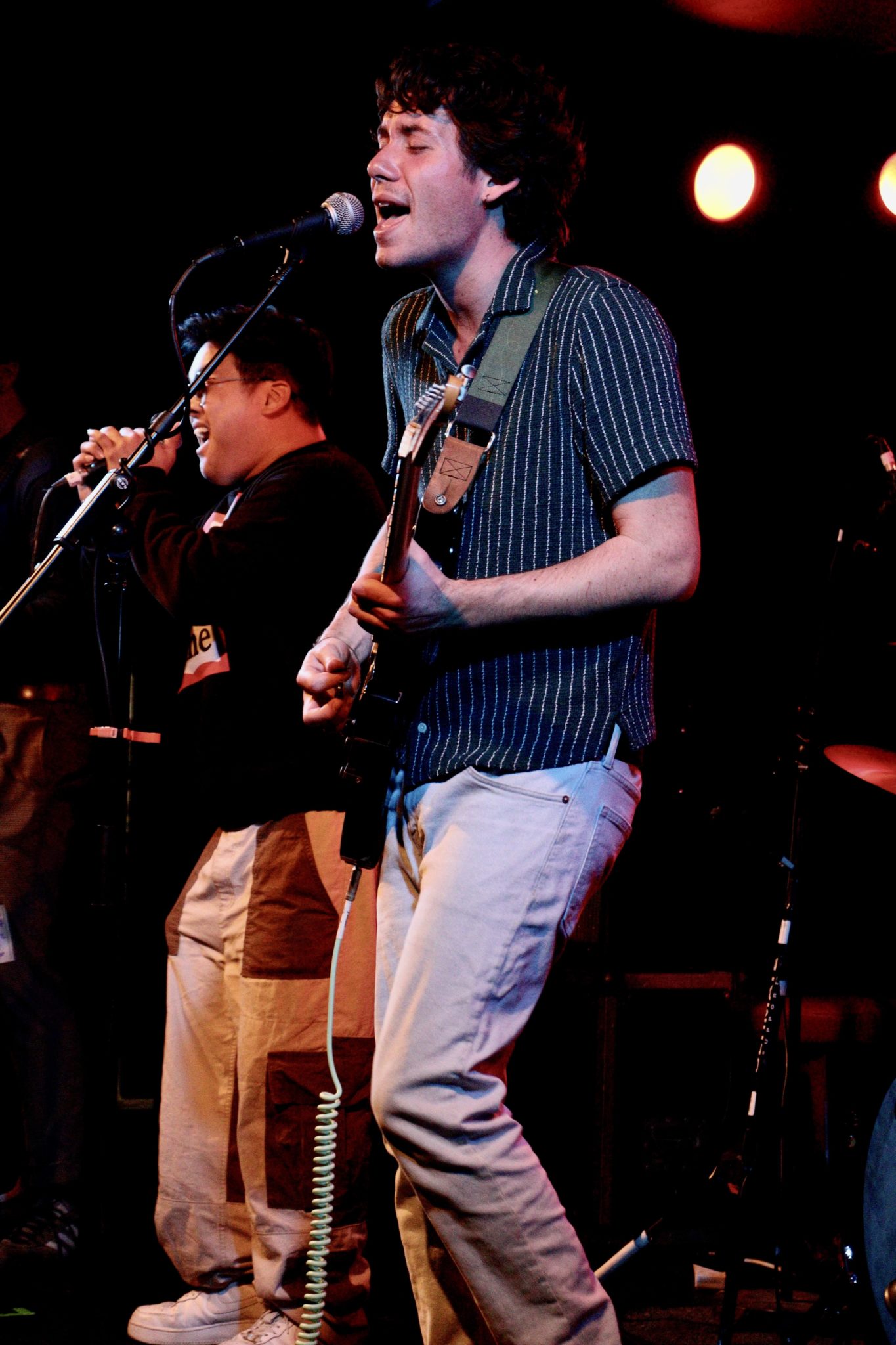 Eli Smart at Whelans for The Road to the Great Escape. Photo by Riley Glaister-Ryder

When Scottish singer-songwriter Dylan Fraser stumbled onstage over a clashing EDM backing track, I couldn’t have expected a set chock-full of illuminating alt-pop textures and vocal depth. Off his first EP, ‘Storm’ was an enticingly dark interlude, followed by ‘I’d Rather Be Here,’ which Fraser shared came to him after a mostly-negative relationship. His instrumental sound, accompanied by a guitarist, drummer and a handy 4-track, brought together white and black noise with sleek synths complimented by Fraser’s deep, guttural vocal range. He undressed the production for ‘Gucci Sweater.’ With just his voice atop melodic acoustic strings, the singer-songwriter crooned between choruses, culminating in a gentle fade-out. His newest single, ‘Apartment Complex on the Eastside,’ was lyrically complex yet carried an upbeat, progressive bass-line that made Fraser’s finale a cinematic crowd pleaser. 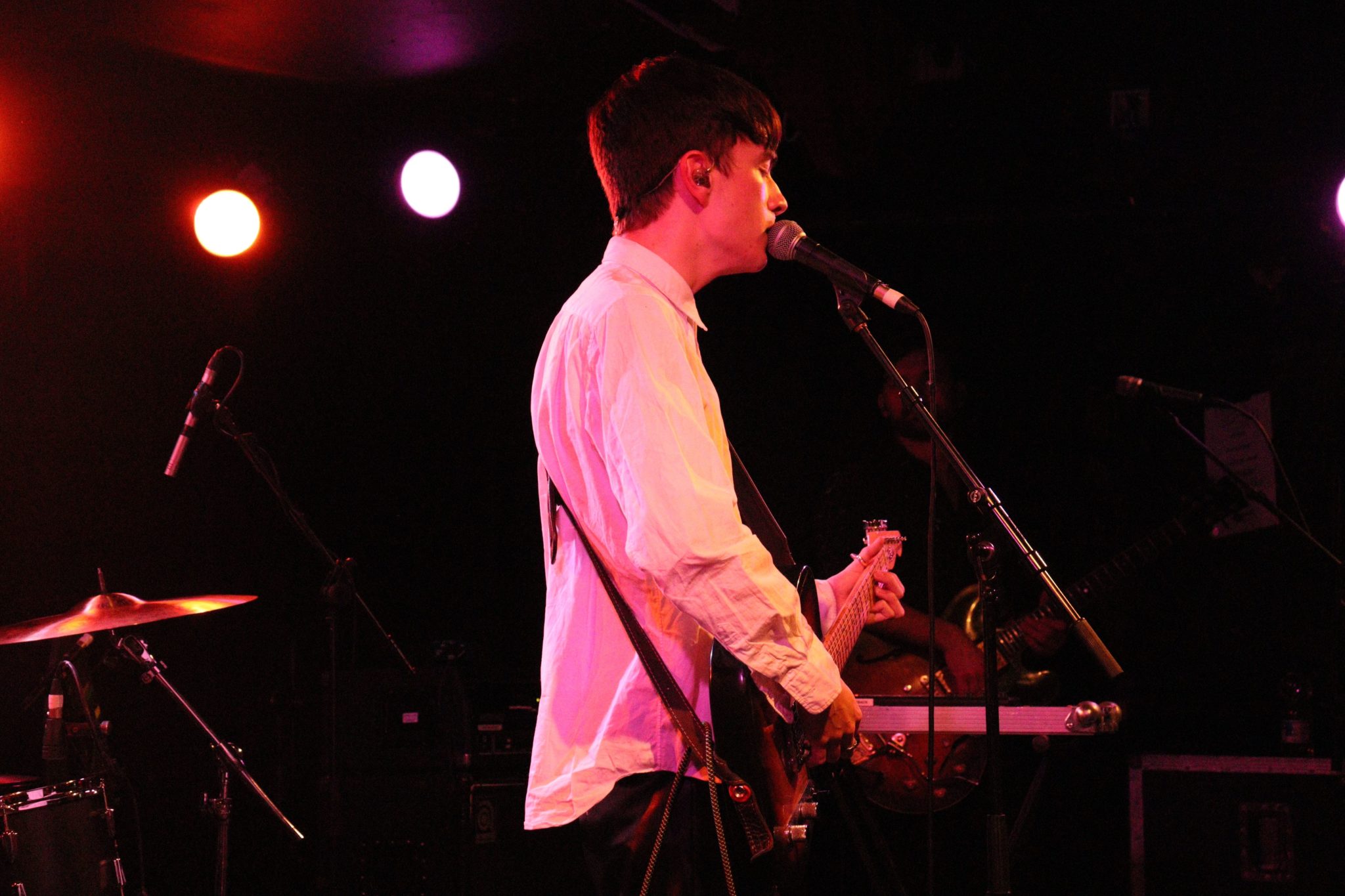 Dylan Fraser at Whelans for The Road to the Great Escape.

Hard to pin down to a single genre, Kynsy - a Hot Press 'Hot For 2020' Act - offered a little bit of everything for every ear. With a unique voice that transitioned from light and swift to erupting from within her chest, the Irish singer-songwriter provided a fun mixture of rebel girl and alt-pop energy. She moved with ease from the unsettled, industrial sound of ‘Elephant in the Room’ to the groovy, multi-layered ‘Happiness Isn’t A Fixed State,’ which presented the artist at face value. “I have so much left to feel,” Kynsy repeats over an astute, groovy guitar lick. The audience pulled out a trust concert tradition for her templative last track, ‘Cold Blue Light,’ as a wave of phone flashlights lit up in slow-moving syncopation. 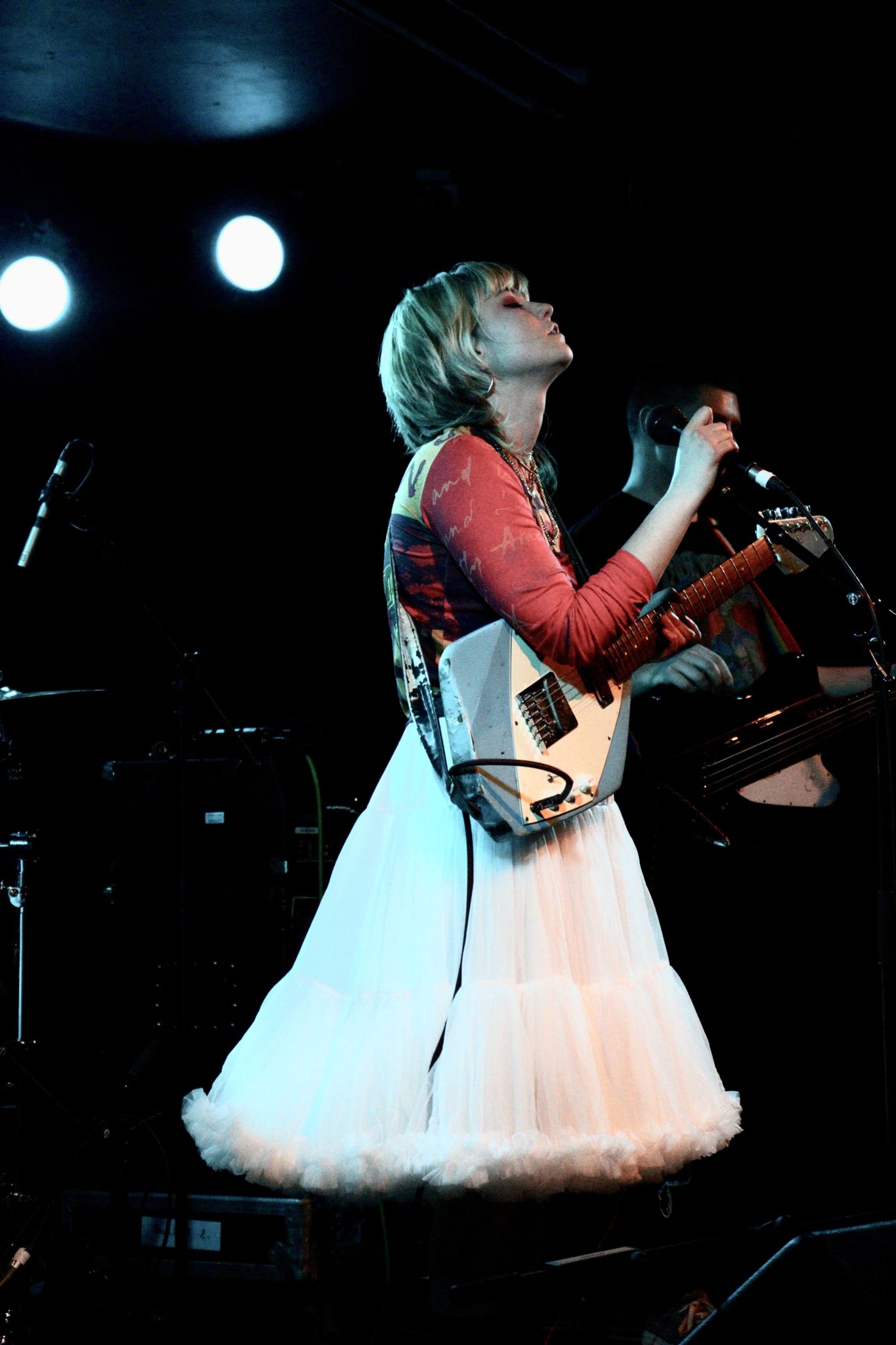 Baby Queen was the showcase's cherry on top, the epitome of anti-pop. Showing up before her set began, she gave her audience a little taste in the form of a brief soundcheck, chatting with the crowd in a casual, conversational tone - as if we were all her closest friends. “I don’t have a band with me tonight, so we’re all in this together, okay?” she announced before disappearing, only after shouting, “Now is the time to get those Baby Guinness shots in. Sláinte, ladies, Sláinte!” With one of the most hailed debut albums of last year, it was no shock that Baby Queen returned with a standout spectacle, band or no band. Her lines were a megaphone for relatable cultural antics; on ‘Internet Religion,’ her mostly Gen-Z crowd screamed along in rowdy agreement to the line, “That's fucking cool, it's a pity we can't Facetune personality.” The blonde, baby pink guitar-slinging anti-pop starlet was talkative and engaged, adding as much to the room with her music as with her personality. After an audience member placed three Baby Guinness shots on the stage, Baby Queen had no choice but to down them one by one, saluting the crowd between each song. “We’re so busy worrying about other people perceiving us. Nobody really fucking caresm you know what I mean?” she declared before her newest song, ‘Nobody Really Cares.’ Her sound exuded bubblegum pop without the unnecessary fluff, latent with heavy choral hooks and energetic guitar-playing, cementing Baby Queen's status as a leading lady in a new wave of pop potential. 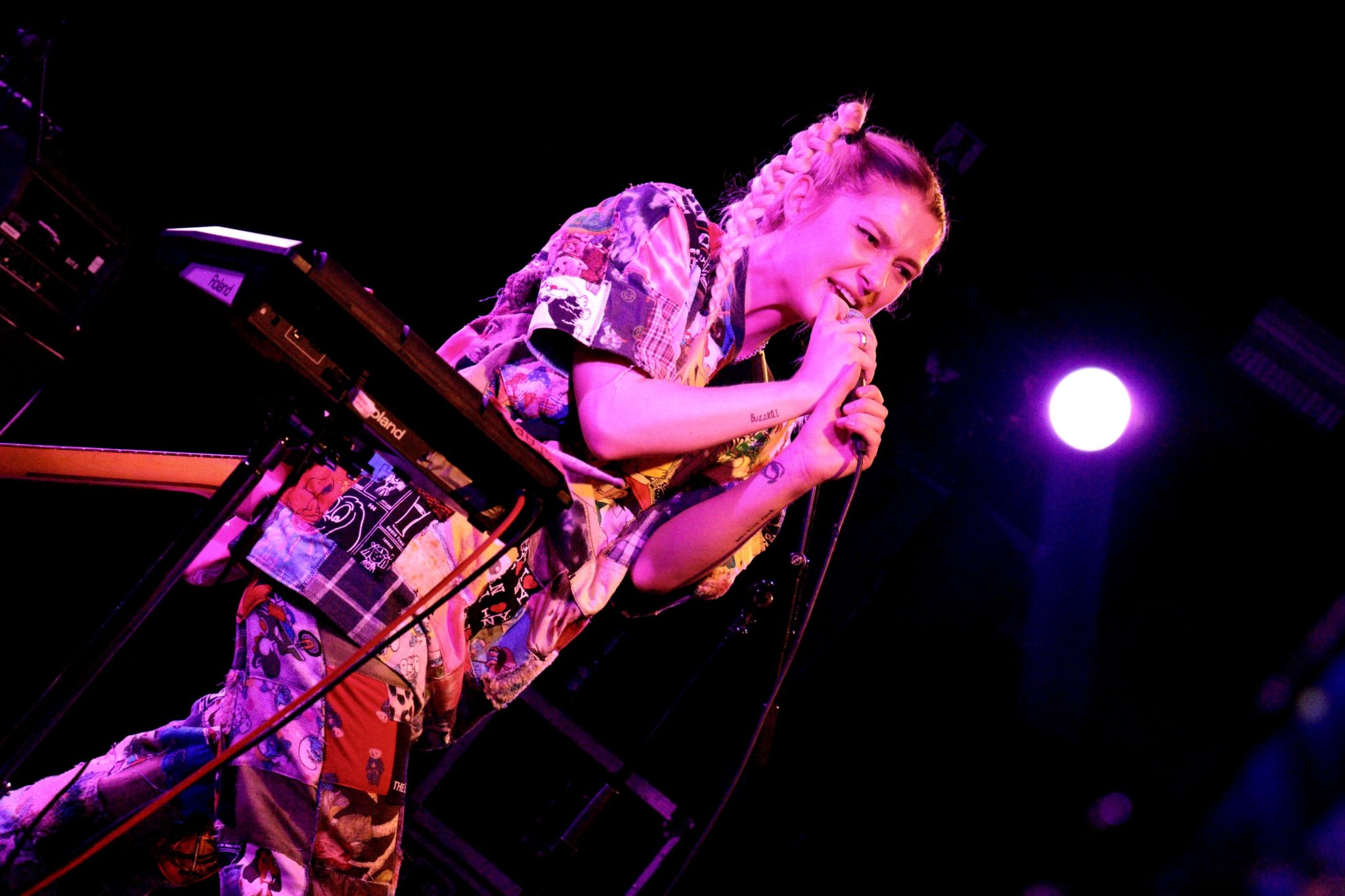 Baby Queen at Whelans for Road Into the Great Escape.

Two nights of Road to The Great Escape flew by in a flash at Whelan's. We were gifted with an array of new artists to follow and an exciting venture into new sound channels. Until next year!

Check out the rest of Hot Press' coverage of Road to The Great Escape around Dublin.

Olivia Rodrigo covers Sinéad O'Connor 'Nothing Compares 2U' in Dublin
Olivia Rodrigo defends Roe v Wade: "I hope we can raise our voices to protect our right to have a safe abortion"
Aby Coulibaly, Malaki and Kynsy among first round of acts announced for The Road To The Great Escape