Live Report: Rowan bring their sound to life for headline show at Whelans
Rowan at Whelan's. Friday 6th of May 2022. Copyright Miguel Ruiz.

Friday night's spotlight shone on Rowan, lighting up Whelans with a headline show on the day of the release of their debut album, Does It Make You Happy?

Dropping an album on the morning of your first headline show is a defiantly dangerous move. But there’s a certain moment during Rowan's headline show at the Upstairs stage at Whelan's, as Dylan Howe stood perched on a drum-kit before barreling into the first note of ‘Everybody Talks,’ where the Irish band made one thing crystal clear: they aren’t afraid of placing bets on themselves.

While the world was in lockdown during their first releases, the trio hunkered down and got serious about things. What followed was 2021's EP Everybody Talks, a little taste-tester into the band's building sound. With music once again alive and touring a thing of the present, not the past, Rowan have secured their place in the now.

Entering Whelan's on Friday night, I was welcomed by the background noise of the Cork three-piece, indie-rock group's opening track off their new album, Does It Make You Happy? Except it wasn’t from a pre-show playlist, but the band themselves in rehearsal. The sound travelled from inside the brick walls of the venue, injecting an immediate buzz of excitement into the air. It was an almost too-perfect tease, a premeditated proclamation that seemed to shout, “Welcome to our world, come on in...”

If Rowan had a world of their own, entering it would feel like coming home to a vaguely familiar place. Inside, friends and family transformed the space into an intimate setting fit for the birth of a largely unheard show. That buzz carried through Laura Duff’s opening set, a mixture of alt-pop and indie tunes like ‘The Other Side,’ which exhaled an electrifying darkness through a descending guitar solo redolent of Led Zeppelin’s ‘Stairway to Heaven.’

When the time came for Rowan to step up, a NASA radio recording signaled the album kickoff ‘Apollo,’ announcing their skyrocketing arrival. Enticingly distorted vocals compliment frontman Dylan Howe’s slurred, raspy timbre (akin to Julian Casablancas’ style) on the record, but in person he is sharp and harmonised.

There’s a subtle lackadaisical nature to Rowan’s manner, hidden in the up-close moments that can only be captured live, from their effortless instrumental synchronisation to the tongue-in-cheek expressions of their lead vocalist. They were composed and simultaneously enthralling, pulling the audience in with their dynamic camaraderie. “Give us your best scream,” Howe requested after the first song, then switched things up, diving into a fan favourite from their last EP, Everybody Talks.

For a track lyrically centred around loss, ‘One Of These Days’ is ambiguous enough to get lost in its fast-paced, energised vocal delivery, drilling guitar lines and militant drumming. At one point, Fionn Hennessy-Hayes’ drum work was so impassioned I swore I saw smoke rising off the cymbals. He transitioned fluently from the breathless whiplash of the song's outro straight into backing vocals on 'Read It in the News,' his mouth pressed into an overhanging mic. 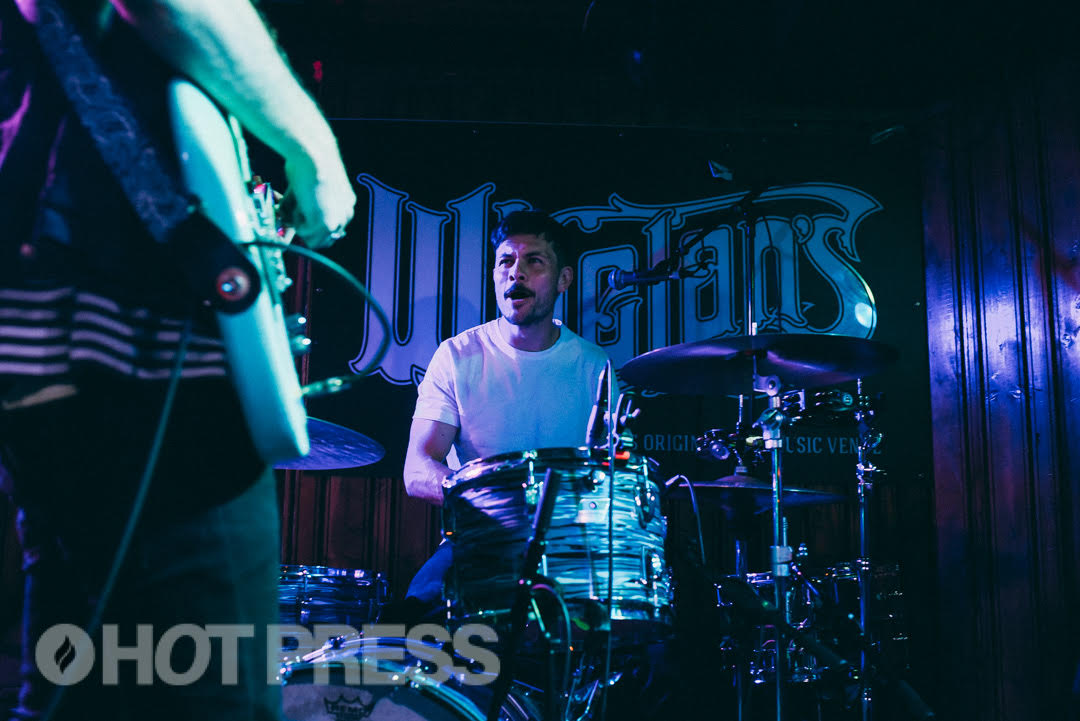 Rowan at Wehlan's. Friday 6th of May 2022. Copyright Miguel Ruiz.

The syncopated standout ‘Big Wave’ was introduced as a pre-pandemic song about, as Howe put it, “everything wrong with the world." And yet, with bumpy riffs and a playful, oddly tropical melody, “These times, they get me down” was a not-so-convincing line; It's a sad song in disguise, proven by the crowd as they followed orders and gave the zestful beat a helping hand. That’s the acute composition of Rowan: contradicting pithy songwriting with indie tunes that make you feel alive and forget to care. Howe and guitarist Kevin Herron even playfully engaged in a game of instrument duelling that may or may not have involved some tongue action.

‘Youth & Youthhood’ is a pivotal turning point on record and off, the kind of coming-of-age soundtrack that’s actually about coming of age. It’s about “not actually being that old but feeling like you are,” Howe shared. The guys held back on the first verse with just a steady drumbeat, before Howe burst open with, “I’m a little scared” and completely ripped the song apart in the best way. It encompasses everything painful and pleasurable about growing up, building up a bridge over the crowd’s chanting chorus before descending into soft acoustic strumming. That softness hung in the air until it was coloured dark with ‘A Fire,’ entering a haunting realm decorated by occasional droplets of light from the electric guitar chimes. Howe’s vocals were drawn-out and agonising, the drums incessant and clashing, the whole act a beautiful, drowned-out mess. 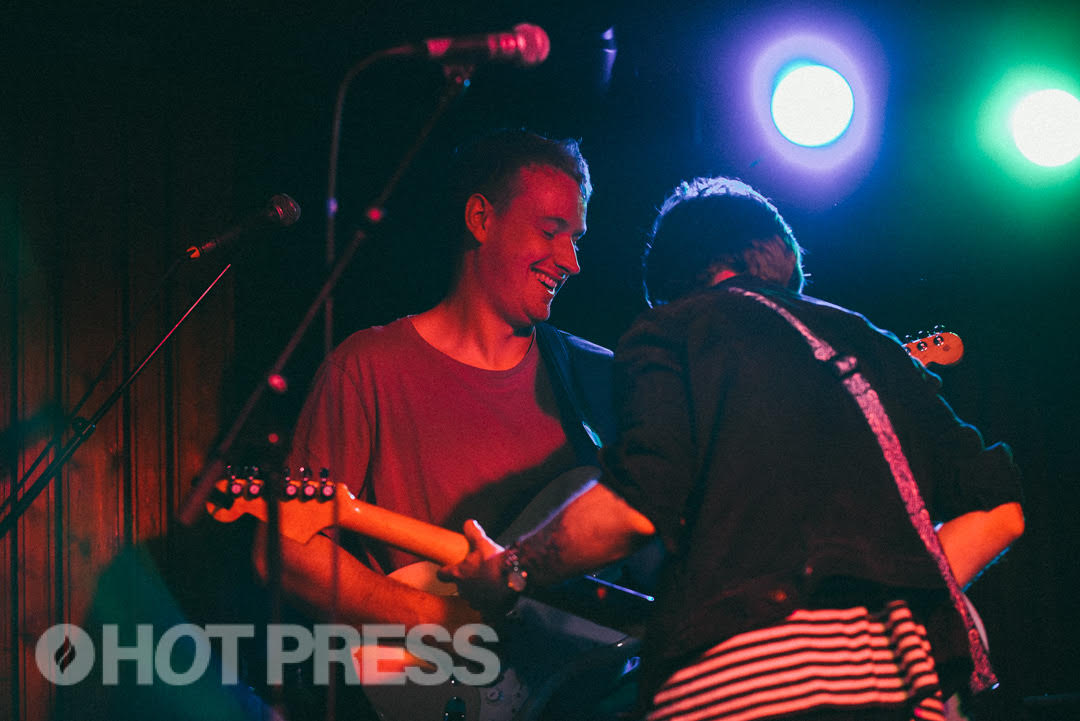 Rowan at Wehlan's. Friday 6th of May 2022. Copyright Miguel Ruiz.

‘Irish To My Bones’ is the guys' indulgence into edgier rock. Screeching guitar riffs and Howe’s actual screeching — an effort that brought him to the ground — were the perfect duet. The music screamed with him, leaving their audience with no choice but to join in on such liberation.

When the time came for the title track, ‘Does It Make You Happy’ everything felt full-circle, encompassing all of Rowan’s many sounds into one, pictorial performance. A humming soundscape gently introduced an ensemble of instrumentals, progressively building throughout the track and culminating into a release. As the music choked and Howe held back before the final verse, a machine sprayed a colourful cloud of confetti into the audience.

The outro was simultaneously final and sustained, a tingling minute-and-a-half which sent a subliminal message as the band disappeared offstage: that’s all, for now.

But the crowd wasn't finished yet. When Rowan re-appeared for their encore, they were level with us: Howe with an acoustic guitar, flaked by Hennessy-Hayes and Herron.

Willingly falling silent to bear witness to a poignant three-piece harmony, ‘I Don’t Wanna Talk’ created a moment of intimacy within that room. It was the shared sensitivity of hearing a song stripped down to its barest bones by three vocalists who were basking in the warmth of a room lit on fire and gently extinguishing the flame.

They struck another match right away. “You guys like noise, right?” Howe joked as a strand of confetti fell from the ceiling.

The lead singer re-entered the crowd for 'Nothing’s Gonna Change,' ending with their first-born breakout song. It was as infectious live as it is recorded, full of alternating guitar riffs and a lively quirkiness. There’s an essence of hopeless escapism to its songwriting. The frontman’s gritty vocals echoed the line, “I need a better weekday to say the things I need to say.”

And that’s Rowan coming full-circle: singing a song about feeling unheard to a room full of people clinging onto every last word they had to sing, every last note they had to offer.

We’re past the era of needing artists to pinpoint their style. But right now, for now, Rowan prove to know exactly who they are and where they want to go, aiming for the stratosphere. Their newest record lit the fire; their sensational live show sent the rocket sky-high.

Listen to Rowan's debut record, Does It Make You Happy? now on all streaming platforms.

New Irish Songs To Hear This Week
KhakiKid brings soul and mayhem to powerful Longitude opening gambit
Cian Ducrot Announces Debut UK and Ireland Headline Tour
Sive on Live at the Local, Naas: "We got on like a house on fire"
WIN: Tickets to see Rina Sawayama at the 3Olympia Theatre this October
Live Report: Dea Matrona tear up the stage @ Aloft Hotel