Eurosonic Noorderslag returned with a unique virtual edition for 2021.

Due to the global pandemic, the renowned showcase festival took place online this year – with a unique digital edition that gave ESNS the opportunity to offer emerging European talent an even larger stage at Eurosonic than usual.

Following the release of her acclaimed debut mixtape, Go Bravely, last year, Denise Chaila continued her reign as one of Ireland’s most thrillingly creative new talents with a performance streamed from The National Opera House in Wexford. Joined by the remarkable talents of Zaska, God Knows, MuRli, DJ Replay, Tommy Gray and Neil Dorrington, the Zambian-Irish rapper, singer and poet brought a polished sophistication and captivating originality to her set, from opener ‘Anseo’ to fan favourite ‘Chaila’.

PowPig's set, recorded at Ireland Music Week, was also packed with character, charm, energy, and above all else, staggering talent. The Limerick four-piece revealed a compelling new direction in their dynamic sound by kicking off proceedings with an unreleased track, 'It Smells', before revisiting the lauded singles that have already established them as one of the best bands in the country.

Showcasing the passionate, socially-conscious lyricism and versatile flow that have positioned him at the forefront of the Irish hip-hop scene, JYellowL's brought ESNS back to his captivating album launch – which originally streamed on the Hot Press YouTube channel. In the stunning, dramatically lit up setting of Swords Castle, the Dublin-based rapper shared some of the powerful highlights from his acclaimed debut album, 2020 D|Vision. 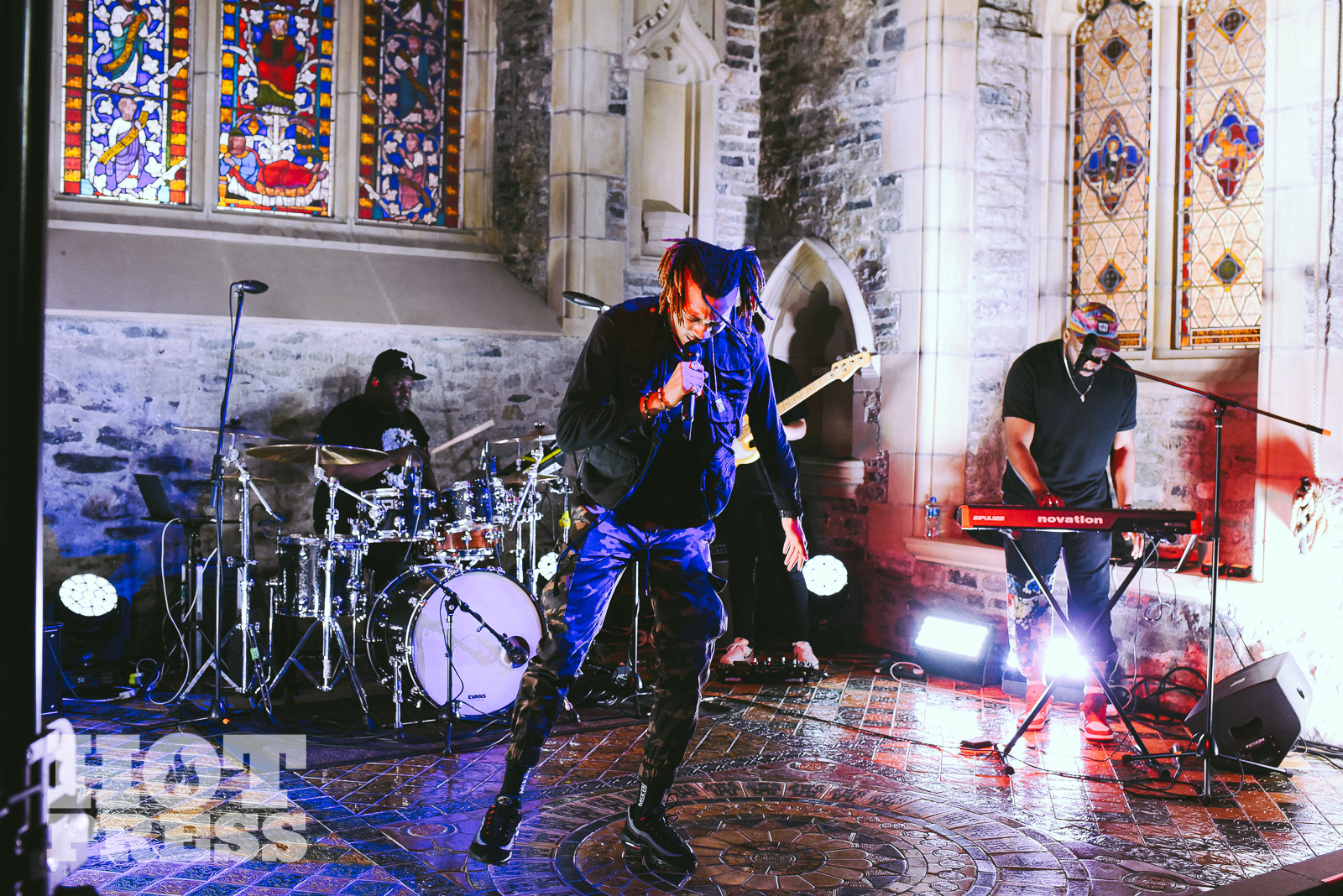 Although still relatively fresh on the scene – with only one release and six shows under their belt – Enola Gay's raw, impassioned performance announced their arrival on the Irish scene as a serious force to be reckoned with. Combining the experimental noise-rock sound of Girl Band with the unapologetically political post-punk stance of IDLES, the Belfast band opened their set with a creatively manipulated Margaret Thatcher speech: "May we bring discord where there is truth. May we bring terror where there is faith. May we bring doubt where there is hope."

Refusing to pigeonhole himself into any one definitive genre, Alex Gough showcased the rich diversity of his sound with a performance recorded at Whelan's in Dublin. Joined by his dynamic backing band, the 21-year-old rapper and drummer's set moved effortlessly from smooth jazz and funk to hard-hitting hip-hop, as he explored the highlights from his lauded new mixtape, FOREVER CLASSIC.

Also performing from Whelan's, NewDad brought a unique intimacy to Eurosonic, with an atmospheric alt-rock sound that cleverly blends nostalgia with innovation. The Galway quartet's set evoked the varied influence of the likes of The Cure, The Pixies, Just Mustard and Billie Eilish – as they played through their acclaimed string of 2020 singles, including 'Blue', 'Cry' and 'I Don't Recognise You' .

Continuing to bring a fresh new alternative sound to Irish hip-hop, Tebi Rex showcased their trademark explosive energy at ESNS, with the backing of their DJ R3D and drummer Aaron Kelly. The duo rocked the virtual crowd with live favourites 'I Never Got Off The Bus', 'Lotus Eaters' and 'Robbin Szn', from their 2019 debut album, The Young Will Eat The Old.

Finally, Robert Grace continued his remarkable rise to pop stardom, with an energetic ESNS set recorded at Whelan's. Opening with his breakout hit single 'Fake Fine', one of the biggest Irish chart success stories of 2020, the Kilkenny artist's catchy, radio-ready sound and timely, whip-smart lyrics resonated as powerfully as ever. His performance also included unreleased tracks 'Just Calm Down' and 'The Hurt You Gave Me'.

In addition to the performances, Ireland had yet another reason to celebrate at ESNS – as Inhaler were announced as one of the winners of the Music Moves Europe Talent Awards 2021 during the festival. The Dublin band were awarded a prize package worth €10,000, to help them on their path to international stardom.

Re-watch all the performances from ESNS 2021 here.

Hot Press Hip-Hop Albums of the Year with Hennessy
Eurosonic Noorderslag will be digital only in 2022, organisers confirm
New Irish Songs To Hear This Week
Review: Denise Chaila's ferocious new EP It's A Mixtape is out today
Denise Chaila nominated for Music Moves Europe Awards 2022
Nick Cave & The Bad Seeds, Groove Armada, Jungle, Sinéad O'Connor & more for All Together Now 2022