Next month yet again, the ten-days festival will encompass a wide range of electrifying acts across the medieval city, from contemporary dance to outdoor theatre performances, typically blending tradition and innovation.

Since 1974, it has remained one of the leading festivals in Ireland, by bringing out the finest local and international musicians, artists and perfomers in its cross-genres series, with a focus on classical music.

This year again, the Kilkenny Arts Festival will host an eclectic mix of musical acts from all over the world, including Ireland, Ukraine, Senegal and Canada, spread out in the city's stunning scenery, where castle, townhouses, courtyards and historic churches - such as St. Canice’s Cathedral and the Black Abbey - will be turned into unique performance spaces for breathtaking concerts.

This versatility in its programme ensures that the series of events will thrill audiences of all kinds.

Folk opera Mark & Marichka Marczyk will perform their brand new show, Balaklava Blues, a mixture of traditional vocals with a range of propulsive electronic dance beats, performed against a backdrop of documentary footage from the front lines of Ukraine’s Maidan revolution.

On the 14th of August, their brand new show, Sun Collective and I Have a Tribe will collaborate to deliver some of the best of what the Irish indie folk scene has to offer, including piano, singing, double bass and percussion on top of their orchestral and jazz background.

On the 16th of August, rising global star Carlou D will blend his powerful voice with Senegalese instruments such as kora and percussion, along with western pop, blues and contemporary influences. 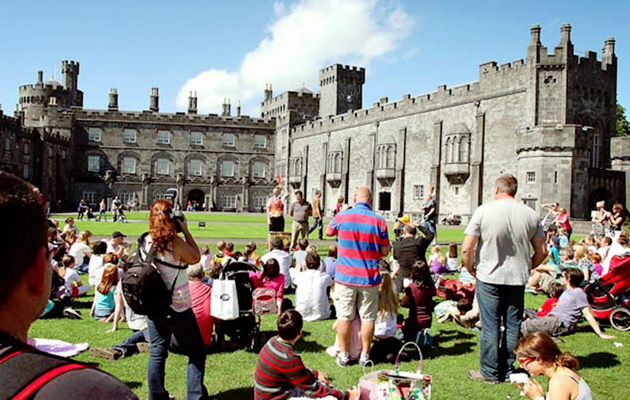 Award-winning poet Cherry Smyth will perform a moving lyrical lament, Famished, in collaboration with composer Ed Bennett and leading jazz vocalist Lauren Kinsella - created after seven years of research into the forgotten stories of the Irish Famine and the role played by British Imperialism.

The acclaimed Crash Ensemble returns to Kilkenny to play a series of free pop-up concerts, including Song of the Books, the Irish premiere of a major new modern work by Northern Irish composer Ed Bennett.

The Quiet Music Ensemble, renowned for their experimental and entrancing music played by some of the best Irish musicians will also be part of the programme. They will mix improvisation with live electronics and recorded sounds to create ambient music designed to immerse listeners fully.

More information can be found on the official Kilkenny Arts Festival website.

Hot Press Lockdown Sessions' Y&E Series returns next week
The Complex launches new northside multi-purpose arts venue
The National Campaign For The Arts warns of 'creative flight' if the Irish arts community isn't properly supported during the Covid crisis
R.Kitt and President Michael D. Higgins meet to discuss challenges facing arts workers
Mary Coughlan announces release date for new jazz and blues album Life Stories
Party Representatives Debate Funding At National Arts Hustings Ahead of General Election
We use cookies to ensure you get the best experience on our web site - by using this web site you consent to our use of cookies. Read more »