Ye Vagabonds: "You have to be careful with how you present what you're doing - particularly with traditional music"
Lucy O'Toole

Ahead of their Other Voices gig, Brían Mac Gloinn of Ye Vagabonds reflects on signing to Rough Trade's River Lea imprint, previous forays into funk, and the duo's stunning second album, The Hare's Lament.

From lofty award show victories and an acclaimed album release, to performances at hallowed venues like the National Concert Hall and St. James' Church in Dingle, 2019 has certainly been a year that Brían and Diarmuid Mac Gloinn can tell the grandchildren about. Whether captured on wax or heard over pints in a Dublin pub, the raw, ageless quality at the heart of Ye Vagabonds' sound has placed the brothers at the forefront of a bold new movement in Irish folk music. Scooping up prestigious silverware for Best Traditional Folk Track, Best Folk Group and Best Folk Album at the RTÉ Radio 1 Folk Awards, as well as Best Traditional Track at the BBC Radio 2 Folk Awards, the biggest problem facing the pair was deciding how best to share the trophies.

"We both kept one, and we sent the other two up to our parents," Brían smiles. "They have them on the mantelpiece at home - delighted with themselves. The family WhatsApp group chats were buzzing for days. We even had a whole row of aunties at the RTÉ Folk Awards."

Having started in 2018, RTÉ's Folk Awards are one of a number of initiatives supporting the thriving trad scene in Ireland.

"In the last few years it's really taken hold," Brían nods. "There's a lot to be said for the people on the ground, running venues and radio stations all over the country, who have been consistently supportive. RTÉ Radio 1 have been really sound. They're always up for taking risks - because a lot of the time, our weird old ballads aren't the sort of music you can play on daytime radio.

"Lankum's success has helped hugely," he adds. "A lot of people nationwide and outside of Ireland have started to take notice of what's going on in Dublin because of them. They've really blazed a trail in this generation."

For Brían, this sense of community is a vital contributing factor to the rude health of Irish folk music. Moving from Carlow to Dublin in 2012, he and Diarmuid quickly became staples of the city's session scene. As well as running their own famously inclusive session in Walsh's, Stoneybatter, on Mondays, you might find the lads sitting in on Lisa O'Neill's Sunday night session in the same venue, or The Night Before Larry Got Stretched, in The Cobblestone in Smithfield.

"It's a lovely intergenerational community, which is quite rare," Brían notes. "I've friends from other countries who say that would never happen where they're from - people in their sixties and seventies sitting around singing songs with people in their twenties."

Ye Vagabonds' role in this remarkable evolution of Irish folk music was showcased back in October, with a special evening in the National Concert Hall curated by the legendary Geoff Travis of Rough Trade. Since launching the careers of The Smiths and The Strokes, Geoff has turned his attention to the growing appetite for traditional music, with the founding of Rough Trade's River Lea imprint. Ye Vagabonds' sophomore album, The Hare's Lament, was the third release on the newly launched folk label.

"Our dealings with Rough Trade are on such a personal scale," Brían enthuses. "We feel so lucky to be part of that family - because it really does feel like one. They've given a huge boost to us. Having Geoff Travis and Jeanette Lee backing up what you're doing, and flying that flag, is amazing."

In a move away from their self-released, and largely self-penned, debut album, the critically acclaimed The Hare's Lament sees Brían and Diarmuid paying homage to the singing tradition of northwest Donegal - with several songs inherited from their mother's birthplace of Arranmore Island. As well as selecting songs from a collection of Róise na nAhmrán, a celebrated singer from the island, Ye Vagabonds were inspired by a source even closer to home - archive recordings of the grandfather they never met, unearthed by chance during Brían's Transition Year work experience in the Irish Traditional Music Archives.

"I was doing all kinds of jobs for the week, but one day I was doing one of the most boring jobs - sorting through leaflets in the office," he recalls with a smile. "There was an older woman, Lisa Shields, there with me. She was retired, and finishing a book that herself and her husband, Hugh, had been working on before he died. Lisa got chatting to me, about my interest in music, and my family.

"I told her that my granddad, Barney Beag, was a singer - but he wasn't very well known at all," he continues. "She said, 'He's hardly Barney Beag Gallagher from Arranmore? Myself and Hugh recorded him back in the '70s'. They had spent a couple of weeks recording people on Arranmore, and spent a good bit of time with my grandfather, who had songs that nobody had ever recorded.

"So Lisa dug out the recordings from the archives, and she left me with a set of headphones and two CDs of these songs to listen to. It was an amazing experience, hearing my granddad's voice for the first time. He almost sounded familiar."

While traditional music is clearly in the blood, Brían and Diarmuid's musical awakening also sprang from less expected areas.

"The two of us were hugely into Led Zeppelin when we were kids," he explains. "It was the song 'Black Mountain Side' that led to both of us taking an interest in folk music. It was intended to be a tip of the hat to Bert Jansch, but Jimmy Page more or less ripped him off on the song. We ended up hearing Bert Jansch's original arrangement, with this crazy guitar part, and we got massively into everything he did. We just went to visit his grave in London last week, and we dedicated 'For Bert' on our first album to him. He was a huge source of ideas for us."

This Bert Jansch discovery didn't instantly transform the brothers into folk purists, however.

"Diarmuid was in a funk band with a bunch of Polish guys for years," Brían laughs. "They recorded four or five songs 12 years ago in Ballina. The recordings were lost for years, but they just found them the other day. Some of them are actually really cool. It's 'zombie apocalypse funk', so it's fairly niche. Maybe we'll release it at some stage...

"We also played in a blues-rock band when we were teenagers, with a bunch of older guys in Carlow," he continues. "There's been all kinds of other things in between. It's healthy to lean into all those directions. At the moment I'm starting to lean more and more towards distortion as a flavour of music. Who knows what will happen on the next album!" 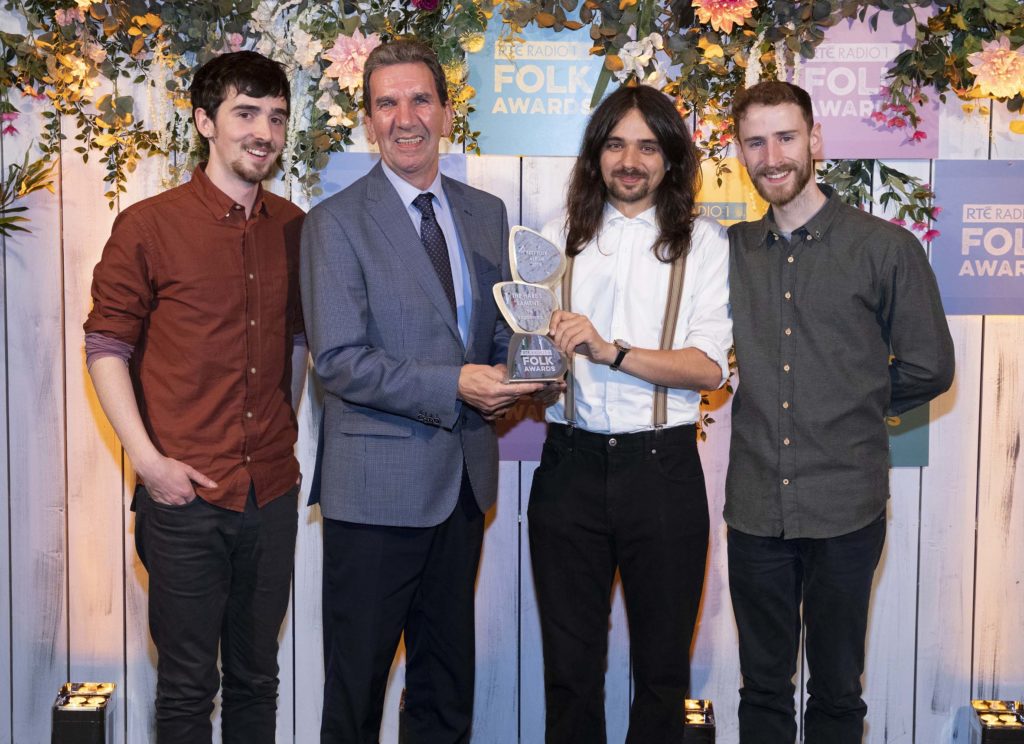 NO REPRO FEE 24/10/2019 Ye Vagabonds are presented with the the Best Folk Album Award by Tom McGuire at the 2019 RTÉ Radio 1 Folk Awards. Picture: Kinlan Photography.

As Lankum have demonstrated with The Livelong Day, the boundaries between Irish folk music and a heavier sound are becoming increasingly blurred. Like the Dublin group, Ye Vagabonds combine ancient, earthy energy with a modern urgency.

"Our generation grew up in the recession, so we've a less comfortable way of being, and more of a disdain towards the political system," he muses. "A lot of people are recognising that the systems in place in society, like capitalism and consumerism, are completely destroying the world that we're trying to grow into."

That being said, Ye Vagabonds are in no rush to embed explicit political statements in their music.

"I don't think it's good to shout a message at people," he considers. "But it's good to make a case for it in a way that will hit them in a softer and more subversive way. Lankum are good at that.

"We're moving in that direction, in the things we're writing about at the moment. We've been touring in the UK, so we're meeting a lot of interesting characters. The politics are much more extreme and divided there. We've had great craic with people - then Brexit comes up and they tell us they're extremely right-wing. Feeling those divides and seeing these characters has made us think a lot more about the way people are coming into those ideas."

"You have to be careful with how you present what you're doing - particularly with traditional music," Brían notes. "People can expect certain things of you as a trad band. We'll even decide not to do some songs, just so we're not conforming to some stereotype. We're careful to avoid the clichés - so we might not be wearing our flat caps in America, for example!

"It's weird having to be conscious about things like that. It's definitely something I didn't think about when I was in my room making music on my own five years ago."

Five years on, Brían and Diarmuid are set to cap off their remarkable 2019 with a bucketlist gig in St. James' Church, Dingle, for Other Voices.

"It's something we've been hoping to do for years, so it's a bit of a milestone," Brían beams. "It's amazing - Amy Winehouse played there. We've seen some amazing stuff happening in that room, so I'm really excited. Other Voices feels like a great national gathering of people. Even the way it's shown in all the pubs - it's almost like the World Cup or the All-Ireland is on, but rather than opposing teams, everybody's shouting for everybody. It feels special to be around there."

You can read the interview with Ye Vagabonds in the Hot Press Annual – in which we distill the highlights and low-points of the year, across 132 vital, beautifully designed pages. Starring heroes of the year Fontaines D.C. on the front we cover Music, Culture, Sport, Film, Politics, the Environment and much, much more. Buy this superb publication direct from Hot Press here.

Glen Hansard: "It’s a powerful thing, to lose your mother... That’s the place you came from, literally. That’s your first home, and it’s gone"
My 2021 - The Darkness' Justin Hawkins: "I hope our Irish shows go ahead this year, but most of all, I want to spend quality time with my parents"
My 2021: Róisín O - "I'm hoping my album release and Irish tour goes ahead without setbacks in 2022"