Molly McAnailly Burke came to Ireland from Seattle in the 1970s. A musician, she began to write for Hot Press, kick starting a journalistic and writing career that took her to the Sunday Independent and onwards into Europe. Sadly, this week, we learned of her death, back in her home town of Seattle, USA...

During the week, Hot Press received the sad news that Molly McAnailly Burke, a former contributor to the magazine, had died tragically in Seattle, USA, where she was living, in a house with her brother Matt Anderson and his son Teo.

Molly arrived in Ireland during the 1970s – and started out on a personal journey across Europe that was founded on a deep love of music, language and writing.

She came to Hot Press through an initial meeting with the legendary Hot Press writer, the late Bill Graham, whose wandering eye and curiosity often led him to befriend the American women who had started to come to Ireland in slightly greater numbers back then to study Irish literature, culture and music. Molly married Jeff Kallen, who became a professor of linguistics in Trinity College, Dublin, though they would go their separate ways later on.

One of the first people in Irish music to befriend Molly was the great Irish blues singer, Mary Coughlan – who became a good and close friend of Molly's over the years.

"I met Molly when she came to Galway in 1975,” Mary recalls. "She and Jeff Kallen were busking on Shop Street in Galway. Molly was one of the finest 5 string banjo players I've known and she had a collection of bluegrass songs I became more familiar with over the years.”

Molly had a deep knowledge of what would now be called Americana, including folk, bluegrass and 'old-timey' music, which informed her busking repertoire – or what she would play, once a late-night session started and the drink was flowing. That, in many ways, was when Molly was happiest – at the heart of a session that’d run late into the evening.

It was mainly during the 1980s that Molly wrote for Hot Press, though she always retained a big love for the magazine as the place that gave her the initial opportunity to write – and thereby to find her feet as a journalist.

“Molly was a great character,” Hot Press editor Niall Stokes says. “She was highly intelligent, and had a very astute critical eye. Everything she wrote about music was informed by her own knowledge and experience as a musician and her familiarity with the highways and byways of American music in particular. But she fell in love with Ireland and with Irish music too and loved meeting the musicians we sent her to interview.

“Molly had a great sense of fun,” Niall adds, "and a smile and a laugh you’d never forget. But her writing could be tough when she felt it needed to be. She was a really good wordsmith – you knew, waiting for a piece to arrive in from Molly that what she had to say – in the unique style she developed – would always be worth reading.

“In many ways, journalism was a place where what might be thought of as eccentric people could find a home – and we were always proud of that aspect of what Hot Press did. Many of the great writers of the time had something of that special quality about them, from Bill Graham through to George Byrne – and Molly was among them She left an indelible impression.”

She had a big impact on musicians too.

"Molly wrote some very memorable articles about me that were published in Hot Press and The Guardian,” Mary Coughlan recalls. "She even came with me and my band for my first UK tour – for a fly on the wall documentary type article. We had many good nights.”

Among the artists interviewed by Molly for Hot Press were Sinéad O’Connor and Enya, before either had made the big breakthrough. As her journalistic profile increased, other opportunities arose and she began to write for the Sunday Independent, with Anne Harris – who was deputy editor then and later Editor of the Sindo – as her great champion.

Anne speaks very highly of Molly, as someone she loved working with. “Because she combined a deep well of reference and knowledge with a strongly Bohemian and individual sense of style,” Anne says.

The Sunday Independent at the time was also a place where eccentrics might feel at home.

“She was an extraordinary woman, a great writer and a brilliant journalist,” Anne recalls, the affection she felt for Molly evident in everything she says. "I really loved her writing. She was really audacious. She was the kind of writer who could make a story out of a cat crossing the road.

“What was most notable about her writing – apart from the fact that she never wrote a boring sentence – was her extraordinary understanding of the complexities of human nature, which was what lit up her interviews and her writing. She had a very forgiving way of explaining their flaws to her interview subjects.

“Molly’s own story is mystifying and heartbreaking,” Anne adds. “She was really beautiful, with those very striking green eyes. But even in the way she dressed, with her backpack and ankle boots, she was someone who always seemed ready to move on. I think she was always looking for love."

Her search for love took her to Bulgaria, where she got married again and lived happily for many years, teaching in the American University there.

"Molly MacAnailly Burke or Molly Burke Kirova as she was known here in Bulgaria was my friend,” Gus Worth, a colleague at the University, says. “She was larger than life, always ready to sing and play – and have a drink and party.

"She was married to Stefan Kirov, who died a few years ago. He was even more larger than life, if that is possible, a famous movie producer who did everything big. They shared a rambling bohemian house on the Danube in Tutrakan, where music was everywhere.

"I never met anyone with her knowledge of music, going back almost to the days before recordings. She linked with singers, bands, and musicians all across the Balkans and Turkey, where she first settled.

"But in all that,” he adds, "she was surprisingly modest, never once trumpeting her many achievements, the perceptiveness of her writing, and the way she seamlessly mixed humanity and pizzazz in her interviews with the famous. She was an intellectual who loved a philosophical or political debate, but again wore that lightly.”

Sadly, Molly was plagued with health issues as life went on and also struggled with getting permanent employment.

"We were colleagues in the American University here for many years, but her hunt for a stable wage brought her to Mongolia, Kazakhstan and Mexico in recent times. She moved back to her brother’s in Seattle where she was from, but couldn’t settle or find employment."

And she missed Europe – and its variety and vast historic culture – greatly.

"I feel that here was her spiritual home,” Gus Worth adds, "and she spoke about wanting to come back only a short time ago. Bulgaria and Ireland has lost a wonderful daughter, music has lost a champion, and I have lost a dear friend."

"I think I'd like to remember Molly sitting in John and Cindy Dring's house,” Mary says, "playing tunes and singing like we did every Sunday for many years: Molly on banjo, Cindy on violin and John playing guitar. And I would begin to sing…"

“She was a dear friend. I will miss her greatly!”

Molly McAnailly Burke is survived by her brother Matt Anderson and her sister Amanda.

(Below, an early appearance by Molly in Hot Press) 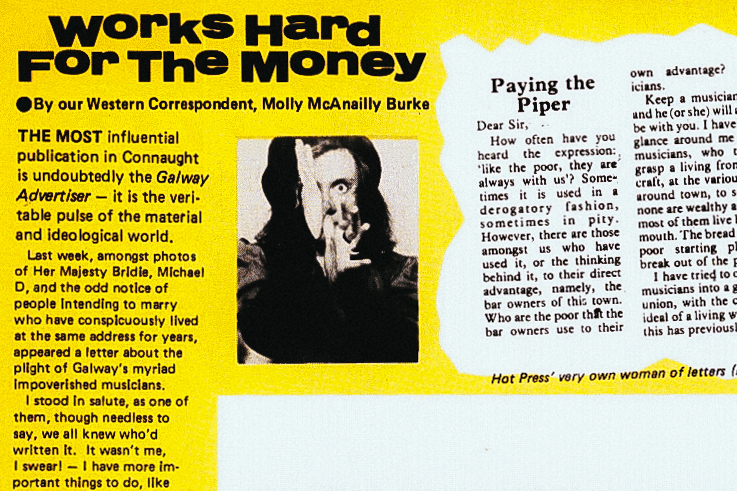 Kings of Leon on When You See Yourself: "We didn’t want any filler; everything had to have a purpose"
St. Patrick's Festival to revive Ireland's cultural energy with over 100 virtual events
Scottish folk singer Karen Matheson covers Brendan Graham’s 'Orphan Girl'

Girl In Red shares wistful new pop track 'Serotonin' from debut album
VIDEO PREMIERE: Peter Doran - 'Nothing New Under the Sun'
Rhiannon Giddens shares new single and video 'Waterbound'
WATCH: Finneas and Ashe reunite on romantic duet 'Till Forever Falls Apart'
Jameson Connects Presents Denise Chaila
PREMIERE: Small Circles and Flora Maye share video for collaborative track 'Low'
We use cookies to ensure you get the best experience on our web site - by using this web site you consent to our use of cookies. Read more »