Established collective Yin Yang present themselves as a label with stellar V/A
By: Alix Renaud

Dublin-based collective Yin Yang isn't holding back with their debut release 'Complex Contrast' which features 25 tracks from a plethora of local producers and established international artists.

Yin Yang burst onto the Irish scene a year and a half ago and have presented Electronica amateurs and party-goers with plenty of good stuff since. While the current circumstances have dampened the mood of the music industry, the collective is rising above through launching an extremely promising label.

Supplied by a bunch of flourishing talents from across Ireland, UK, Europe, America and South-East Asia; their 'Complex Contrast' compilation offers an intense and mesmerizing journey by showcasing an impressive catalog of skillfully crafted tunes. It encapsulates various sub genres, ranging from futuristic Electro to hard-hitting Jungle and touching on dark undertones of techno right through to brighter mutations of Drum'n'Bass.

"When opposites attract and align into the cycles of primary chaos and energy, seeping into elements of movement, dance and music to result in a new state of unwavering balance, the compilation is a prime example. ‘Complex Contrast’ mirrors the vision of the imprint as a whole, bringing together a multitude of textures, tones and themes that collide and weave into one other for a visceral experience," Yin Yang explain.

Indeed, this release merges together a myriad of different yet symbiotic sounds and influences, all perfectly orchestrated and beautifully woven together. To top it off, all 25 tracks have been mastered by no other than Joe Farr, a famed DJ and producer whose exquisite mastering skills have been widely praised internationally. 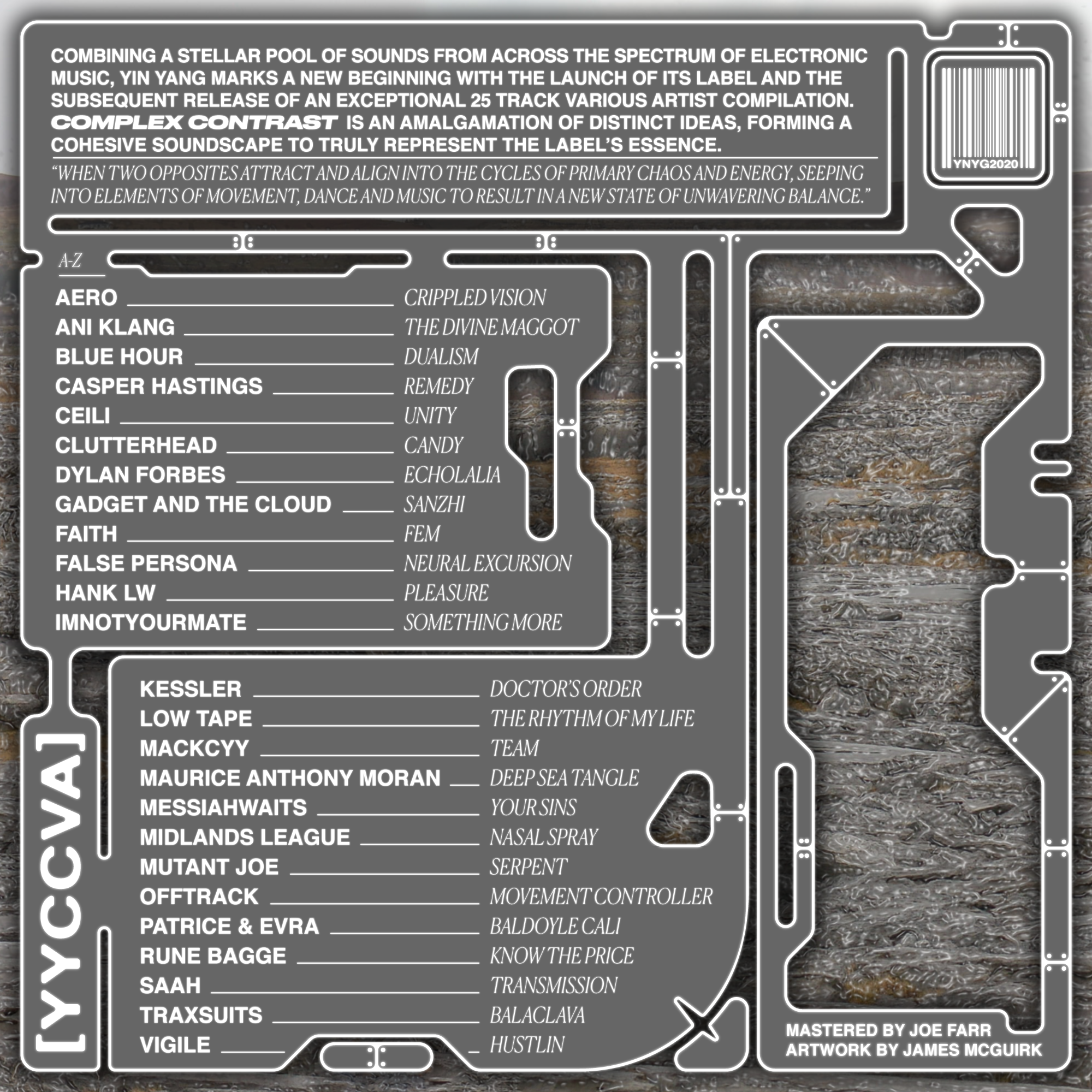 "A deluge of different soundscapes complete the V/A and every artist featured has brought an element of their own aesthetic to shape the direction of the label," further explains the press release.

"The compilation breathes in tandem with the listener and offers a slant in the shadows of what else is to come on Yin Yang’s schedule. Available in digital format, ‘Complex Contrast’ leaves a lasting impression with its interpretation of organised chaos, resulting in a perfect blend of kinetic and palpable energies to the end."

The Dublin-based collective celebrated its first anniversary in March this year, after putting on a slew of successful gigs, on top of a quality podcast series. To mark the occasion, its members had organized a big event in Wigwam, headlined by Pangaea and supported by no less than ten acts.

While this was unfortunately cancelled due to Covid 19, the Yin Yang heads are now coming back stronger than ever: not only are they expanding into a music label, this V/A is an absolute gold mine. No messing around with this first release, there is no denying how solid it is.

It would be a shame not to grab a copy!

Irish Arts Center in New York announces a 'Virtual Spirit of Ireland Gala' featuring Liam Neeson, Gabriel Byrne and more
Declan McKenna reveals a world turned upside down in 'Rapture' music video
Bitch Falcon’s Lizzie Fitzpatrick: "Girl Band changed the quality of music in the Irish rock scene completely"
Donegal band Screaming Orphans release Christmas single Song We Used To Sing
In Their Own Words: Jack L on his new album '"Streamed" Best of the Lockdown Sessions, Vol. 1'
Film Review: Crock Of Gold – A Few Rounds with Shane MacGowan
We use cookies to ensure you get the best experience on our web site - by using this web site you consent to our use of cookies. Read more »