Disappointment after Thin Lizzy fail to make Class of 2020 at Rock & Roll Hall of Fame
By: Tanis Smither

Today, the Rock & Roll Hall of Fame released its Class of 2020. The list of inductees includes Whitney Houston, Notorious B.I.G., Nine Inch Nails, T. Rex, the Doobie Brothers, and Depeche Mode, who will all be honoured on May 2nd at a ceremony in Cleveland.

The shortlist of nominees who will not be inducted in 2020 include Soundgarden, Mötorhead, Dave Matthews Band (who won the fan vote), Pat Benatar, Rufus and Chaka Khan, Todd Rundgren, Judas Priest, MC5, Kraftwerk, and Irish rock band Thin Lizzy.

It's a disappointment to many Thin Lizzy fans. Online, there is much debate as to whether or not it is acceptable for pop and hip-hop musicians like Whitney and Biggie to be inducted into a Hall of Fame that takes its name from the rock and roll genre, while rock artists like Thin Lizzy are shut out.

The consensus seems to be that the Hall of Fame needs to change its name entirely to be more reflective of the artists who are being inducted, with Twitter user and Thin Lizzy fan @FMRadioMetal writing: "With its ongoing ban on Thin Lizzy, Mötorhead, and Judas Priest, the Rock & Roll Hall of Fame needs to take both rock and/or roll out of its name." 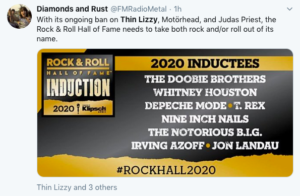 Ten Great Foreign TV Box-Sets To Watch During Lockdown
Nine Inch Nails gift fans two new albums!
Other Voices reveals Thursday line up with Angie McMahon, Alex Gough, Editors and Jafaris
REASONS TO BE CHEERFUL PART 1: Margo Price, Soccer Mommy, James Blake, Gary Lightbody & The Scratch are all making it seem better today
Tributes flood in to DJ Al Keegan who passed away on Wednesday
Kesha releases new song about Nicolas Cage
We use cookies to ensure you get the best experience on our web site - by using this web site you consent to our use of cookies. Read more »