For the first time in five years, the legendary American folk singer is making his way to UK shores this October.

Bob Dylan is set to bring his electric Rough and Rowdy Ways Tour to the UK this autumn. The worldwide tour was set in motion last December in Milwaukee, followed by 74 shining concerts around the states. Now, the iconic singer-songwriter is branching out, announcing nine stops on this side of the Atlantic.

The Duluth native will kick off the UK leg of his tour on October 19, with four nights at London’s Palladium before travelling over to Cardiff, Hull and Nottingham. The UK tour will make its final pit stop in Glasgow, with two shows announced for October 30 and 31.

The singer is set to tour his 2020 record by the same name through 2024, with more mystery dates yet to be announced. The sum of his many parts, Dylan 39th studio album, Rough and Rowdy Ways, is strikingly clever – one of the singer’s most profound poetic statements to date.

The Rough and Rowdy Ways tour thus far has sparked rave reviews, as Dylan has continued to draw in the devoted ears of tens of thousands in his intimate but playful live shows. Audience members will be required to lock their phones away in Yondr pouches for the duration of the show, ensuring the night is authentically cherished.

Tickets for Bob Dylan’s nine Rough and Rowdy Ways UK dates go on sale this Friday, July 15 at 10am via Ticketmaster. You will want to have your alarms set for this one. 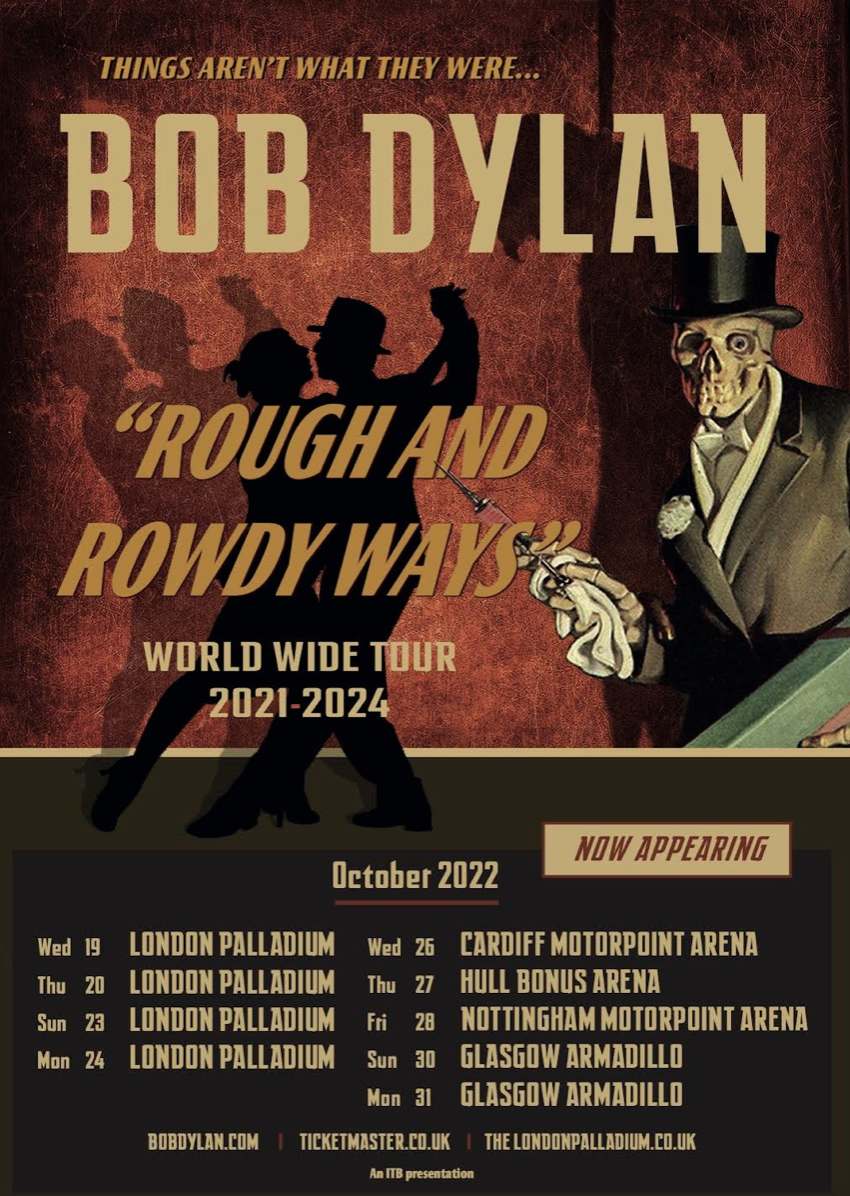 On this day in 1969: The Band released their classic self-titled album
Bob Dylan: What Happened When the Rough and Rowdy Ways Tour Hit Denver
Ezra Furman: "I can’t understand how profit and power have become gods worshipped above all else"

Scullion announce slate of Irish tour dates in support of new album
Bob Dylan announces Dublin gig as part of Rough And Rowdy Ways Tour
The Year Of Living Dangerously: "Is there any sensible way back from the brink?"
Every Breaking Wave: Folk, Nu-Folk, Anti-Folk and more - "Enya took the template to another level entirely"
Conor McPherson on Girl from the North Country: "Music does give us such a great amount of relief. It redeems us"
Bob Dylan re-recording of 'Blowin' In The Wind' sells for €1.7m