Big Thief: "Everyone is trying to be this certain kind of cool, and it’s so flat now"
Credit: Josh Goleman

As Big Thief return with their expansive new double album, Dragon New Warm Mountain I Believe In You, producer/drummer James Krivchenia discusses making music during a volatile time in the US, and why the band aren’t afraid of “being corny...”

Almost as though they were tipped off about a looming virus that was about to disrupt every aspect of the international music industry, Big Thief packed a lot of living into 2019 – including signing to 4AD, and releasing two acclaimed studio albums, U.F.O.F. and Two Hands, in the space of five months. The projects, which each received Grammy nominations, cemented the band’s growing reputation as one of the most brilliant forces in American indie-rock, propelled by the fearlessly honest songwriting of lead singer Adrianne Lenker, as well as the collective power of her bandmates Max Oleartchik, Buck Meek and James Krivchenia.

Now they’re back with their fifth album, Dragon New Warm Mountain I Believe In You. And if you couldn’t tell by that epic mouthful of a title, Big Thief are doing nothing by half-measures – having originally compiled 45 songs for the double album, which they eventually whittled down to 20. James, the band’s Minnesota-born drummer, has also stepped up as the producer of the project, which was recorded over four different sessions, in locations spanning the US.

Sitting in his bright Los Angeles home, he acknowledges that lockdown brought “a lot of silver linings” for the band.

“Just to be forced to stop touring was pretty necessary for us – because we’d been doing it for four or five years, steadily,” he explains. “During the first couple of months of lockdown, we finally had a moment to realise what we’d been doing and go, ‘Holy shit!’ We’d been so in it, so it was really nice to step out of it, and have a different perspective.

“There’s this little inner hustler inside all of us in the band, and probably in other people who end up doing music as a career too,” he adds. “In some ways, you need that, to be able to function in the world we live in – which kind of sucks. But it was nice to have that voice be quelled for a while.”

After six months of reflection – during which time Adrianne recorded her lauded solo projects Songs and Instrumentals – the band regrouped once again, to start working on Dragon. Although James had been involved in the technical side of things on the band’s previous LPs, and has released experimental electronic albums as a solo artist, the new album marks the first time he’s stepped fully into the role of producer on a Big Thief record.

“It came about naturally,” he reflects. “I know everyone so well at this point, and I know everyone’s little studio tendencies. So, I was like, ‘We should do multiple shorter sessions.’ I decided to just pitch what I was thinking, and see if people were down. And everyone was like, ‘Yes, 100%.’” 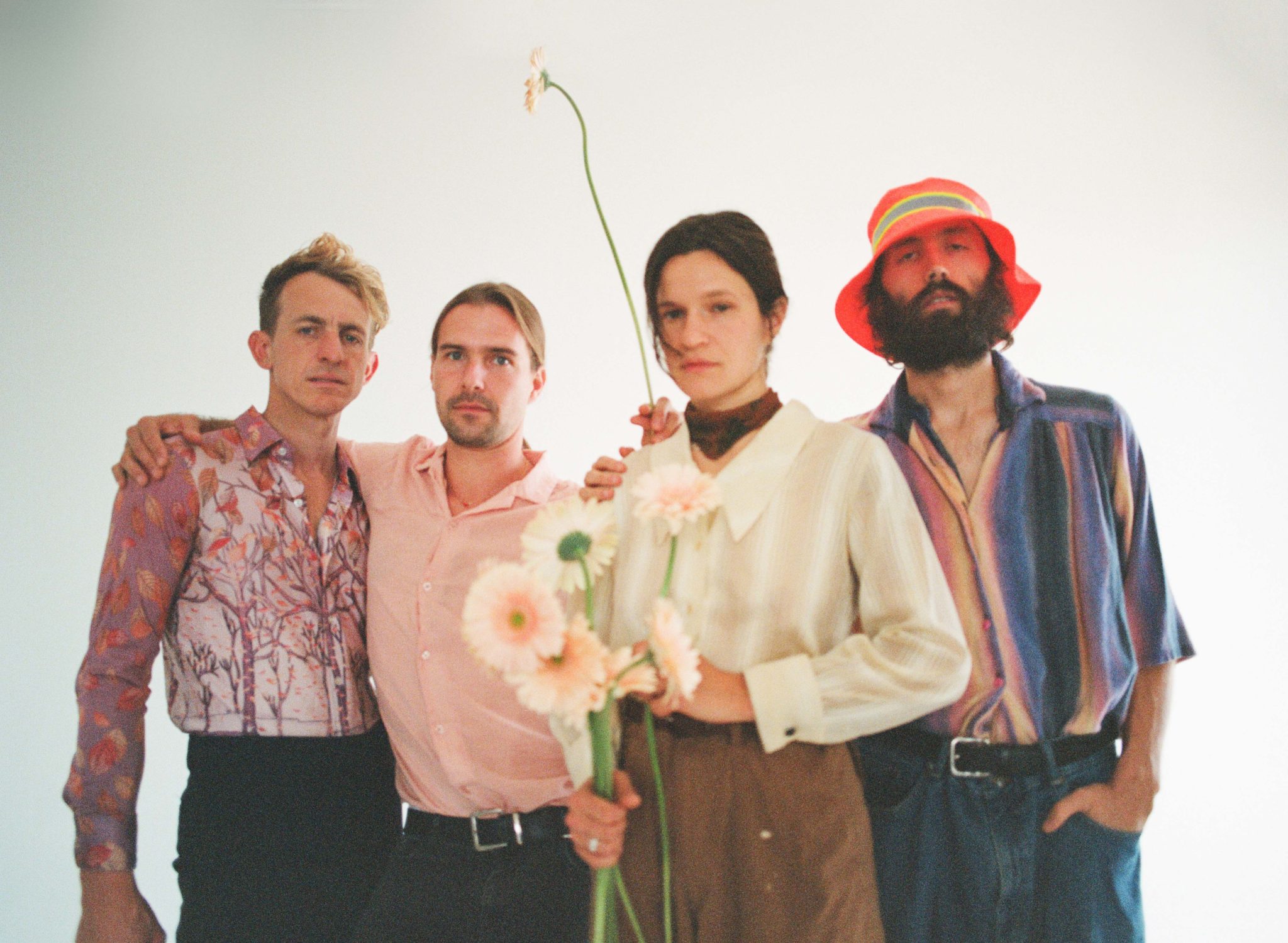 Across five months, they recorded in Upstate New York, Topanga Canyon in California, the Rocky Mountains, and Tucson, Arizona. In many respects, however, 2020 was a strange time to be exploring America.

“It was really weird,” James nods. “It was still during Covid, but it was very different everywhere we went. It was also right around election time, which was really intense in America. We were actually driving to the third session on election night. So that definitely coloured the whole session.

“People were really stressed the fuck out over here,” he continues. “It was crazy. It was a time of feeling infuriated, generally. People felt so powerless – because you’re stuck in your house, reading the news. There was so much attention on that, so it was nice to put some attention on something else. And be like, ‘Well, we’re going to vote on election day, and that’s the tiny, minuscule bit of power we have over that situation. Let’s put our energy and power into something positive – and not just watch the news and feel bad…’ It felt really good to be with friends, doing something creative during that time.”

Although grand in scale, there’s a magic simplicity at the rawest roots of Dragon, as a celebration of this friendship. As James admits, the band don’t “shy away from being corny…”

“Or being sweet!” he adds, laughing. “That’s a real strength of the band. When stuff feels a little too corny, or too sweet – or if someone’s like, ‘We sound like little kids!’ – I’m like ‘That’s it, y’all. That’s great.’ Everyone is trying to be this certain kind of cool, and it’s so flat now. Politically, you know exactly where everyone stands. There’s all these rules. No one says them, but it’s so obvious. And if you play by them, no one will get mad at you, or think you’re corny. But you’ll just be kind of boring!”

‘Spud Infinity’, one of many album standouts, revels unapologetically in absurdity, and above all else, good fun – drawing inspiration from artists like outsider folk icon Michael Hurley.

“We love Michael Hurley,” James grins. “And a lot of the people in that scene like Brian QTN, who Adrianne just did a little tour with. He’s amazing. And Tucker Zimmerman. We love a lot of old, weird folkies!”

James’ central goal with Dragon, he explains, was to include all of these different sides of Big Thief, on one comprehensive record.

“Because the reality is, we’re not focused,” he adds. “I have a lot of very disparate, strange interests and passions and personality quirks that make up my identity. It’s never as simple as the celebrity mythos around a specific person, and I think that’s really true for Adrianne. So you want to show all sides of the writing, and all sides of her personality. And the different sides of the band. It doesn’t have to be this laser-focused, ten song, perfect record, with good, consistent sound. It can be all over the map. Because in reality, that’s what we are right now. We’re not focused at all!”

Having to choose which of the 45 tracks recorded during the Dragon sessions would make it onto the final album was a bit like picking between their children.

“Some of my favourite stuff didn’t make it,” James reveals. “At one point we were like, ‘Why don’t we just release all of it?’ But we were also trying to find a balance between releasing the true experience of it – which would be everything – and what actually feels good to take in. Honestly, I don’t listen to 45-song albums, ever. That’s too much of one thing in a sitting for me – let alone for someone who might be like 15 years younger than me. They’d be like, ‘That’s insane. What are you talking about?’

“So we decided to just please ourselves, in terms of what we thought a good album is, to us. The idea was to have it feel long – so if you really wanted to focus on Big Thief you could listen to it in a sitting, but not feel like you’re twiddling your thumbs at the end.”

Clearly, Big Thief aren’t afraid to carve out their own non-conformist path, which makes them somewhat of an anomaly, as a band who simultaneously clock up streams in their millions. But as James admits, “You do present your music differently, when you know you have an audience of any size.”

“I don’t know many people who actually just make music for themselves,” he adds. “To me, that’s kind of psychotic. There’s some sort of Western fascination with ‘genius’ like that. But it’s just bizarre, to me. You want to share it with people, and you want people to react to it.”

His own solo work explores a very different world bringing together field recordings, sounds culled from the internet and “knob twisting”, to craft strangely unsettling electronic soundscapes on his latest release, 2020’s A New Found Relaxation. Could he see these different sides of his artistry bleeding into his work with Big Thief any time soon?

“It will happen naturally, when it happens,” he posits. “We tried some electronic stuff on Dragon, and it kind of failed! So it’s not on the record. But it was cool to try, and that’s how I imagine incorporating it. They’re incredible for sitting alone and making stuff, but electronics are still kind of clunky, as a live instrument. But I’m sure you’ll hear it pop in or out, in some way or another.”

When he’s not kept busy with solo work or Big Thief duties, you’ll also find James drumming on recent releases from Taylor Swift, Big Red Machine, Ben Howard and Mega Bog – something he enjoys, he says, as a form of “ego smoothing and suppressing.”

“It’s so different from when it’s your own record,” he remarks. “I actually find I play better when there’s not so much pressure, and when I play drums on other people’s records, I don’t feel pressure. I care because I want to make them happy, but I don’t care because I’m worried about this artistically. Because it’s their record, it’s not mine. There’s something nice about that. Maybe it’s something I should trick myself into doing more with Big Thief – being like, ‘I don’t care!’”

However, James acknowledges that “it is possible to spread yourself too thin.”

“That’s something I think I’ve done at times,” he continues. “And one of the things that makes Big Thief so powerful is this certain consistency. We play a lot together, and because of that, we actually get a lot better. You can feel it. And that can only come from time. You can’t fake it, to get to that. So that’s really special.

“I do value those focused, long-term relationships with musicians,” he adds. “Watching the Beatles documentary, I was like, ‘Goddamn, they’re a good fucking band!’ And it’s because they’re actually a band. It’s not that complicated, and it’s not like they’re crazy savants or anything. They just did it. So I like that idea of making sure I stick with those things.”

So could we see a Get Back-style documentary about Big Thief, somewhere down the road?

“I bet there will be one, at some point,” he laughs. “We have this VHS camera that very occasionally gets taken out. I’m sure there’s gold on a lot of those tapes. But it’s not that consistent – because the batteries are always dying, and then we lose the charger for like a month…”

While he rejects the myth-building that surrounds a lot of bands, James notes that there is “a definite romantic streak” to Big Thief – something which shines through more than ever on Dragon.

“It’s slightly romantic, at this point, to have musicians playing together, and just making music in a room,” he says. “That’s not that common anymore. And that’s something that feels very important, in terms of our identity – what we think about making music, and how we want to make music.”

• Big Thief play the National Stadium, Dublin on Saturday, February 26. Dragon New Warm Mountain I Believe In You is out now.