Five months on from a similar demonstration where a letter was given to the Taoiseach, protestors from the Traveller community took to the streets to vocalise their frustration and devastation once again.

Members of the Traveller community and their supporters gathered outside Leinster House yesterday, calling on the government to urgently address the lack of access to mental health resources.

Organised by the National Traveller Mental Health Network, the protest follows emerging studies highlighting the growing mental health crisis and the significantly higher levels of suicide amongst the Traveller population.

After starting off the protest with a performance by the Resistance Choir, Hugh Friel, a representative from the Donegal Travellers Project, stood in front of a traditional barrel top wagon to address the crowd.

“As a Traveller, I have to die fifteen years earlier than a settled man, why is that? And who is accountable?” he asked.

“We’re in a systemic time where Travellers are dying every day by suicide, we’re in a place where the Travelling community’s mental health issues have exacerbated throughout the Covid period.”

“This government needs to listen and it needs to listen today to members of this network to get an action plan around mental health and suicide rates within the Travelling community,” he added. 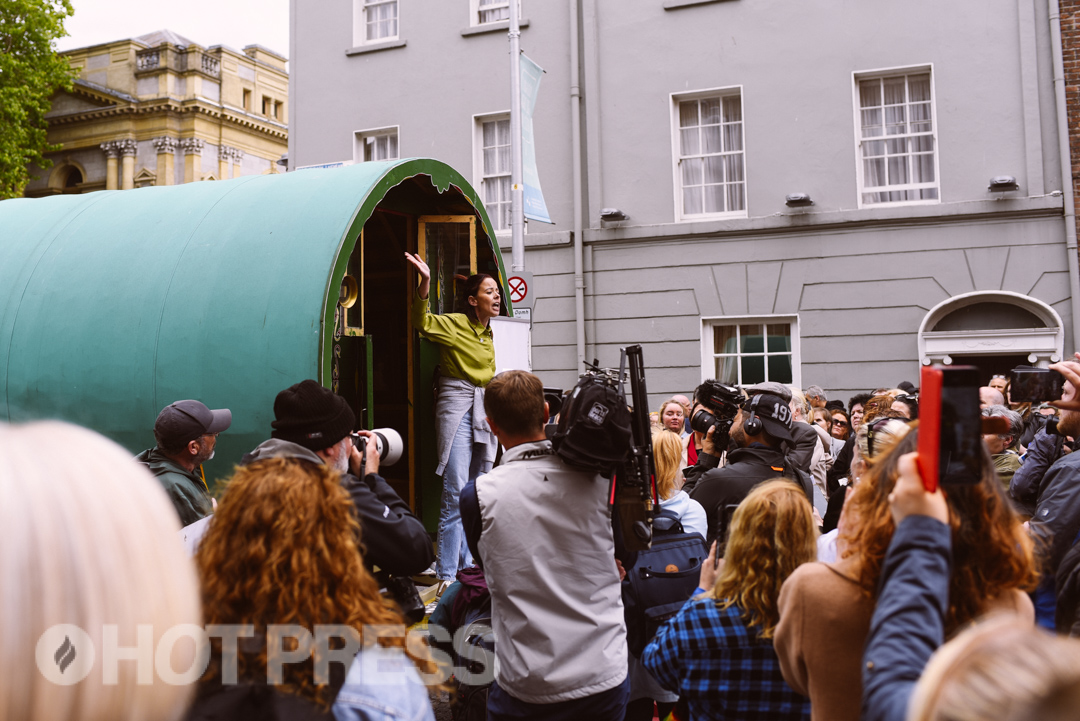 Senator Eileen Flynn delivered an emotionally charged speech which addressed her grievances with the lack of response from the government regarding the issue.

“The shame that I feel as a Senator sitting in that house is absolutely unbelievable," Flynn said. "As a Senator for the Travelling community I have been for two years begging the Minister for Mental Health to take responsibility… to stop our young men, our young women dying from suicide. Two years I’ve been doing this - this is my third time to speak in two years at a Traveller Mental Health Network protest. How many Travellers have died in two years?” she asked the crowd.

“It is so tough to be yourself and be a member of the Traveller community. You walk up the street and someone has something to say to you, just because you’re a Traveller. We’re not treated as second class citizens in this state, we’re treated as rubbish.”

Addressing the members of the Travelling community in the crowd, she said “I know you’re tired… people who have had numerous experiences of death by suicide within our community. I know you’re tired but keep holding on because change - I hope with all my heart - is just around the corner.”

Senator Flynn offered a proposal for how to solve the issues presented at the protest: “What the minister needs to do is implement a Traveller’s stand alone strategy for the Traveller mental health crisis because enough is enough. It ends now and it ends sooner rather than later before many, many more lives have to end through suicide.”

Mags Casey, Chairperson for The National Travellers Mental Health Network delivered a harrowing speech saying, “We’re not going to sugar coat it anymore, because we as a community have faced that injustice.

"We have buried our children; we’ve buried our lovely brothers, mothers, uncles, aunts, cousins, we were the ones who carried them on our shoulders.” She then went on to ask politicians to open a dialogue in order to create “a better society for everyone in Ireland over the next ten or twenty years.” 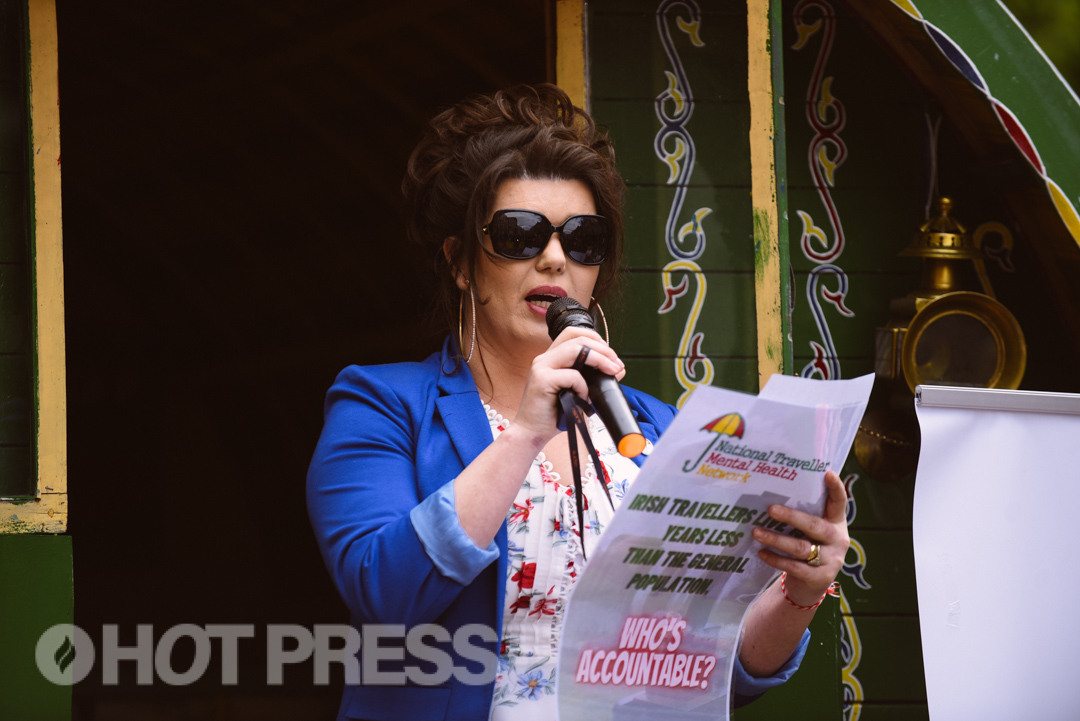 “For decades, Traveller organisations have been calling on this government, have been meeting with the government, have been on advisory panels, have been part of task forces and yet it hasn’t translated to any real change for Travellers on the ground," he declared. "We have Travellers living in dire conditions; we have unemployment; huge poverty - we have young Traveller men and women with no hope for a future in this country unless there is change.”

“We’ve moved on from assimilation to integration to partnership but it hasn’t made any real change, although the language has changed,” he added.

Member of the Traveller community, singer Davie Keenan, performed a short set before a letter for Taoiseach Micheál Martin was read out. The letter mentioned the lack of response by government to their previous demonstrations and their petition, which was signed by over 4,000 Traveller people. The activists requested for a meeting with the Taoiseach to discuss the issue.

Martin 'Beanz' Warde, a member of the Traveller community, was in attendance to show his support. 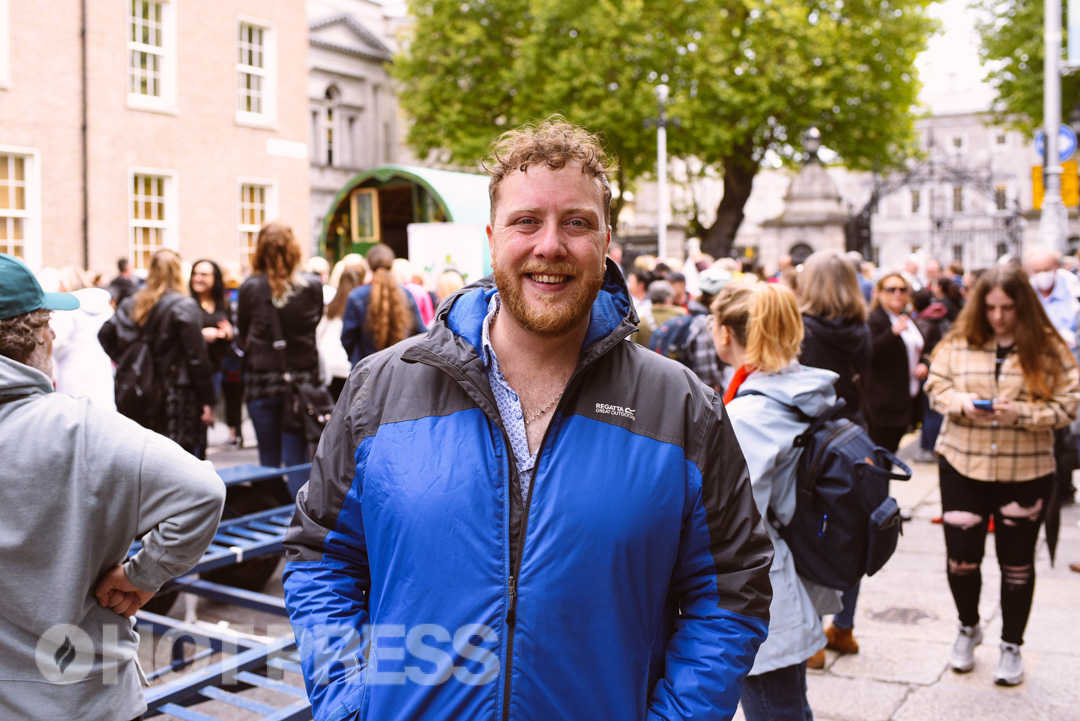 The comedian is documenting the protest for a project on Traveller mental health and wellbeing with the National Gallery of Photography.

“I am interested in speaking about mental health issues and this one happened to be about Traveller mental health issues. I am really happy with the turnout because there's a lot of support from just regular people but also politicians, people are really getting behind it," Warde offered. "This crowd is at least three times larger than the last protest I was at, so it is really positive.”

Add California sun to your Christmas with Apothic Wines
Review: FIFA 23 – "A game that brings in the new, while not quite ushering out the old"
Direct Provision Christmas Gift Drive launched by Bohemian FC, MASI, Bang Bang, the RDS and DHL

Adidas and Stormzy announce the launch of collaborative venture - #Merky FC
New data from Threshold reveals private renters in desperate need of assistance
Tech Review: Samsung Galaxy Watch5
Tech Review: Samsung Galaxy Z Flip4
Hot Press Mental Health Special – Talking Bollox Podcast: "We’re from a place where you have to be a hard man... No one tells you to be vulnerable"
Review: The Last of Us: Part I