Between its world-renowned wine, ancient landmarks and picturesque landscape, the Mosel region has lots to offer. Here’s an insider’s travel guide to one of the most spectacular areas in Germany.

Where is it exactly?
The Mosel, a tributary of the River Rhine, runs through southwestern Germany and close to the border of Luxembourg and France. Trier is one of several small cities dotted along the banks of the Mosel, boasting a gorgeous landscape of lush vineyards and hills.

Why should I go?
One word: wine. The Mosel region is famous for its fantastic Riesling, one of the most popular white wines among connoisseurs. One of the most spectacular wine regions in Germany, the landscape of the Mosel valley is defined by its vineyards, which cover around 9,000 hectares of steep hillsides. Almost every single village or town along the valley has its own wine festival in the summer - meaning that there’s no shortage of events to keep you occupied. The area’s ancient Roman history is also visible in the landscape, with sites and buildings that date back to the first century.

How do I get there?
Several airlines, including Ryanair, operate direct routes between Dublin and Luxembourg Airport. Buses to Trier are available from the airport.

What language do they speak?
German is the native language, but many people will also speak English.

What’s the transport like?
The Mosel region is a largely rural area, meaning that public transport will not be as effective as in urban centres. To make the most out of your stay, and to fully experience the nature and history of the Mosel area, consider renting a car, and explore some of the beautiful villages in the surrounding area.

Where should I stay?
There are plenty of hotels and holiday apartments in Trier that will provide the perfect base for a visit to the Mosel region. Hotel Eurener Hof (Eurener Straße 171, 54294 Trier) combines a traditional atmosphere with luxurious features, and its city centre location is ideal for exploring Trier and its many historical sights. For a cheaper, but similarly central stay, check out Siebenglück (Speestraße 7, 54290 Trier), a cosy bed-and-breakfast located close to the city centre. 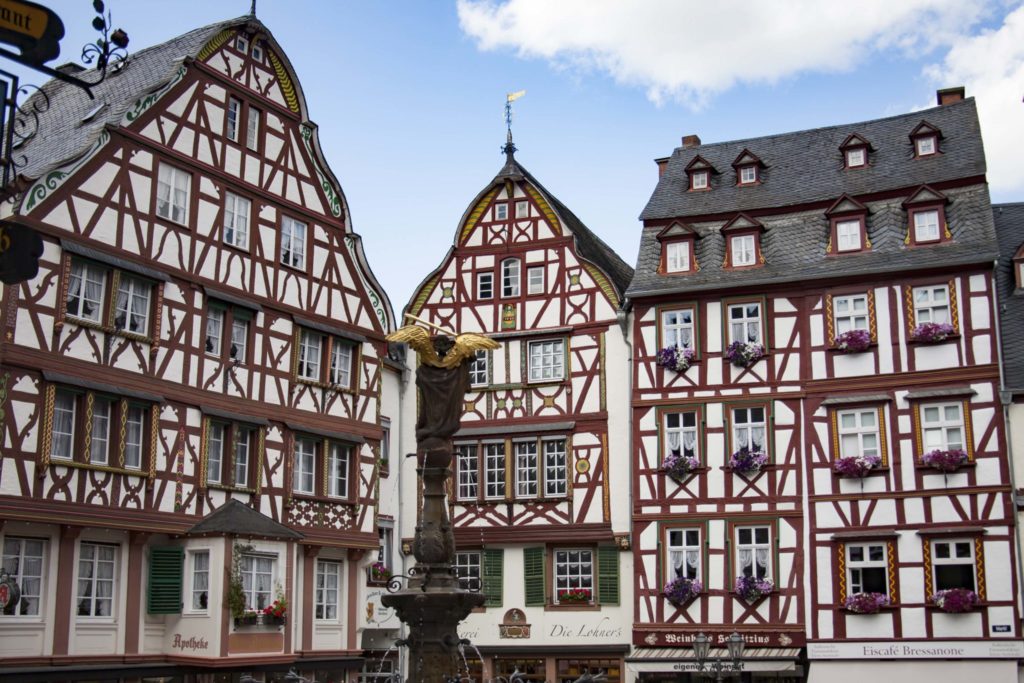 What are the touristy things to do?
Trier, one of the oldest cities in Germany, features a series of impressive ancient Roman attractions, including the Porta Nigra (Porta-Nigra-Platz, 54290 Trier). Built in the second century as a city gate, the Porta Nigra is now listed as a UNESCO World Heritage site. The Konstantin Basilika (Konstantinplatz 10, 54290 Trier), built in 310, is also worth a visit. The building has been fully restored as a functioning church. The Romans also built a bath complex in Trier called Kaiserthermen (54290 Trier) and an Amphitheatre (Olewiger Straße 25, 54295 Trier), both of which are well worth a visit.

Which places should I visit?
There are plenty of villages near Trier with unqiue attractions of their own. The small city of Bernkastel-Kues is a 40-minute-drive away, and boasts a gorgeous Old Town and marketplace. A small hike from Bernkastel-Kues is Burg Landshut, one of the many castles the Mosel region. Traben-Trarbach is another highlight of the region, and is home to the Middle Mosel Museum (Casinostraße 2, 56841 Traben-Trarbach), a beautifully preserved patrician townhouse featuring ancient décor and historical artifacts. Zeller Hamm, meanwhile, is certainly the most Instagramable spot in the area. From the top of the hill you have a wonderful view over the Mosel valley, including one of the river’s most spectacular loops.

Where can I get a drink?
Unsurprisingly, wine is the most popular drink of choice for visitors to the area. The “Moselaner” know the value of their product and are proud to show it to the world. The biggest and most popular wine festival is the Middle Mosel Wine Festival in Bernkastel-Kues, featuring fantastic fireworks, a parade and the crowning of the wine queen. Wine tastings are also very common and offered in hotels, restaurants or wine bars.

What’s the food like?
As the region runs along a river, fish dishes, particularly eel, trout and roach, are especially popular – whether they’re served smoked, baked or pickled.

The potato is also a big part of the local food culture. Mashed together with Sauerkraut, it’s served under the name “Kappes Teerdisch”, or as a hearty cake named “Schoales”. Potato soup is also a staple in restaurants and street festivals along the Mosel. Locals often use wine to refine their food, turning normal meat dishes into tasty specialities such as the “Winzersteak” or the “Wingertspohl”. For dessert, be sure to try Weincreme, a mousse that’s enriched with – you guessed it – wine.

When should I go?
The Mosel region is the most beautiful in summer, when the Weinfeste are underway.