Stranger Things season 4 release date announced in an open letter to fans: "We hope you stay with us as we finish this tale"
Alexandrea Hopper

Stranger Things creators, the Duffer Brothers, have revealed the release dates for the forthcoming two-part season, as well as news about the series' future.

The Duffer Brothers, have revealed that season 4 of global hit Stranger Things will come to Netflix this spring in two instalments.

Due to the "unprecedented" length of the latest season, Volume One will premiere on May, 27 with Volume Two following soon after on July 1.

"With nine scripts, over eight-hundred pages, almost two years of filming, thousands of visual effect shots, and a runtime of nearly twice the length of any previous season, Stranger Things 4 was the most challenging season yet, but also the most rewarding one," the brothers penned in an open letter. "We can't wait to share it with you."

While the promise of double the Stranger Things content surely exciting fans, the showrunners also shared insights into the finale, which is coming sooner than expected.

"Seven years ago, we planned out the complete story arc for Stranger Things. At the time, we predicted the story would last four to five seasons. It has proved too large to tell in four, but we are hurling toward our finale," they wrote. "Season 4 will be the penultimate season; season 5 will be the last."

The directors projected that there may be "more exciting stories to tell" within the Stranger Things world, but the current journey is coming to an end.

Season 4 picks up with the Hawkins' gang six months after "The Battle at Starcourt", which brought destruction to the Indiana town. Struggling with the aftermath, the group of friends are separated for the first time and navigating the complexities high school has to offer. While meandering through insecurities, a new supernatural threat emerges, presenting a mystery that, if solved, might finally put an end to the horrors of the Upside Down.

Of the new adventure, the brothers said: "We hope you stay with us as we finish this tale of a powerful girl names Eleven and her brave friends, of a broken police chief and a ferocious mom, of a small town called Hawkins and an alternate dimension known only as the Upside Down."

Since its premiere in 2016, Stranger Things has blossomed into a world wide phenomena, garnering over 65 awards and 175 nominations – including Emmys, Golden Globes, Grammys, SAG awards and more. The programme has become one of Netflix's most-watched titles, with season 3 amassing 582 million view hours and season 2 accounting for 427 million.

Read the full open letter from the Duffer Brothers below. 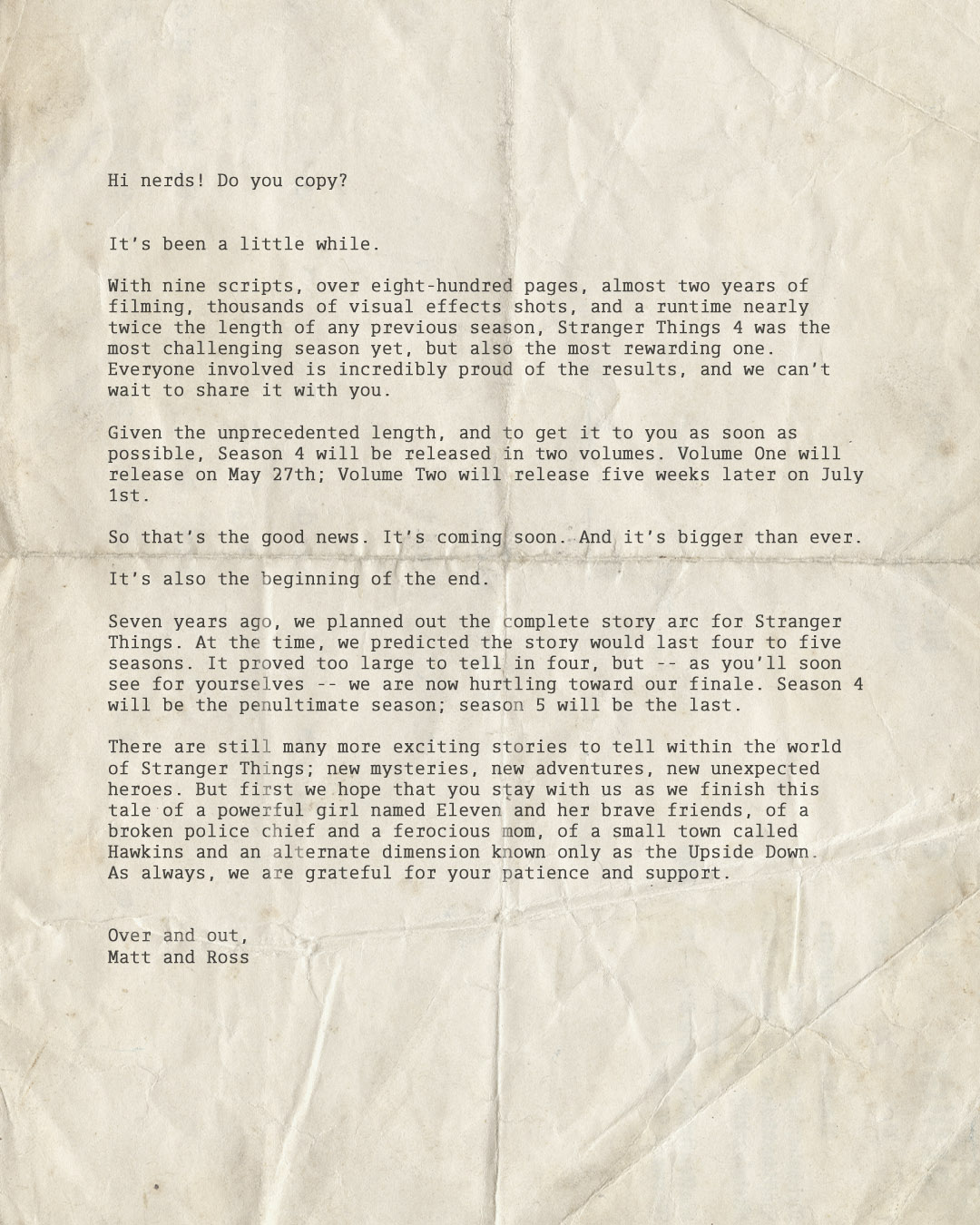 Netflix share new 'Stranger Things' Series 4 teaser, confirm production
WIN: Tickets to a special preview screening of THOR: LOVE AND THUNDER
Sive on Live at the Local, Naas: "We got on like a house on fire"
The Shows Must Go On: 'Borgen', 'Man Vs Bee', 'The Baby' and more
Stranger Things cast to host virtual watch party in honour of season four's final episodes
Emma Langford on Live at the Local, Naas: "We created three unique original pieces of work"