Clare Dunne on Herself: "We felt like we were honouring the people who've actually been through this"
Clare Dunne. Copyright Miguel Ruiz.

Forced to live in a series of grotty hotel rooms after leaving her abusive husband, Sandra decides to buck the system by building her own home from the foundations up. Star and co-writer Clare Dunne talks to Stuart Clark about Herself, an Irish film that’s as visceral as it is important.

Those were some of the headlines in response to the “it’s the perception that matters” comments made last month by Dublin City CEO, Owen Keegan, who doesn’t like homeless people sleeping in tents or voluntary organisations delivering services to them on the streets.

It all adds to the impression that, where officialdom is concerned, Ireland’s homeless are a nuisance to be hidden away in substandard emergency accommodation rather than a coterie of people who deserve their own front-doors to put a key in.

It should be a mandatory requirement for all government workers, civil servants and their political masters to watch Herself, the new Phyllida Lloyd-directed film, which highlights just how easy it is to become a person of no fixed abode and in need of one of those tents, which bear testament to decades of failed housing policy.

Its star and co-writer is Clare Dunne whose last feature-length outing was in Spider-Man: Far From Home, more of which anon. She plays Sandra, a young Dublin mother of two who’s the one forced to leave the family home after her husband savagely beats her.

Herself’s opening scenes are as graphic a depiction of domestic violence as you’re likely to see this or any other year. They’re a shocking but necessary window into the lives of thousands of women like Sandra who, even if they manage to escape their abusers, still find the odds stacked against them.

“While Sandra’s story is a fictional one, it was really important to myself and the rest of the crew that the telling of it reflects the real life experiences of the domestic abuse survivors who don’t have the voice or the platform that we have,” says Clare who’s sheltering from monsoon-like rain in a London café. “I was very aware that the events we were depicting in that scene are what give women trauma and PTSD and shit to deal with for years to come. We felt like we were honouring the people who’ve actually been through this. Myself and Ian Lloyd Anderson, who plays Gary, did a lot of research in order to understand our characters and their back stories.” 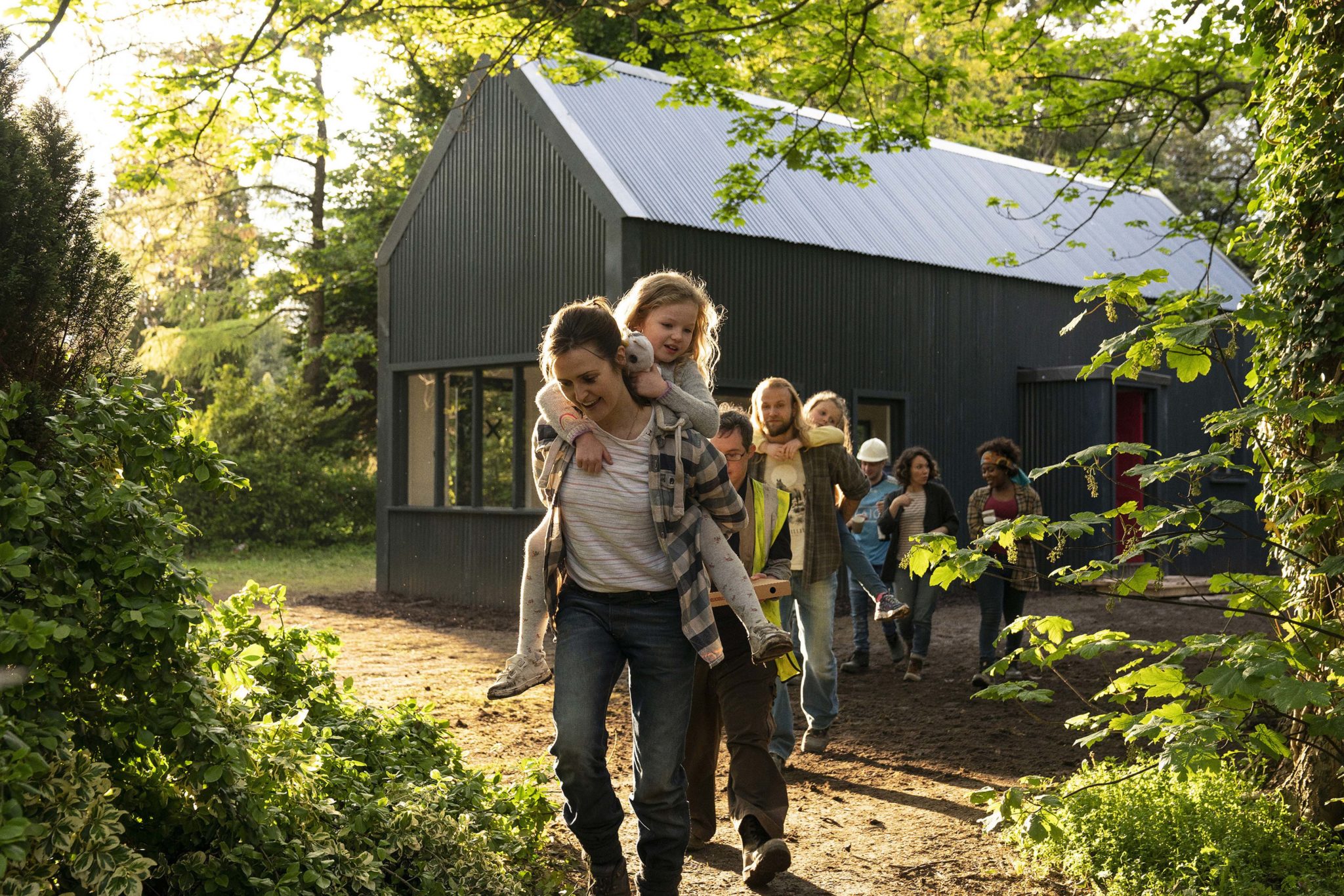 The emotional intensity of the scene was such that Clare needed a coping mechanism to get through it.

“For most of the shoot me and Ian remained in character and talked like Sandra and Gary even when the cameras weren’t rolling,” she explains. “When it got to the height of the fight, though, I had to step out of it and pretend I was in a Marvel movie, which kind of helped – but not with the whiplash. It’s one of those roles where a large degree of physicality was involved.”

Already at alarming rates before Covid, domestic abuse calls to An Garda Síochana rose by 25% during lockdown.

“A lot of people found themselves in the position where they couldn’t ignore a coercive or abusive partner anymore. The increase in calls to the Guards and Women’s Aid is obviously awful, but at least people are reaching out and we’re having this renewed conversation about domestic violence.”

Bucking the old “never work with children or animals” adage, Clare is full of praise for her tweeny co-stars Molly McCann and Ruby Rose O’Hara, who play Sandra’s daughters.

“The casting process was by necessity a long one,” Clare explains. “We needed them to strike a very particular tone, so after each round – I think there were four in the end – we brought the kids in for chemistry reads. They were very aware of what the story was about, and weren’t mommy-copped by their parents. Ruby Rose was exactly how I’d envisaged Emma to be and Molly, who’s only four, must have been a movie star in a previous life because the cameras didn’t phase her one bit. She’s a complete natural, totally organic.”

Somewhat further advanced in her career is Dame Harriet Walter, the veteran British thesp whose credits include The Crown, Downton Abbey, Killing Eve, Star Wars: The Force Awakens and Rocketman. It’s her character, Peggy, who gifts Sandra the plot of land she needs to build her DIY home on. As the pipedream becomes reality, she regains the dignity and lust for life her now ex- robbed her of.

“Harriet, myself and Phyllida have worked together in theatre for years,” Clare enthuses. “She’s the ultimate pro. You think she’s doing nothing and then there’s the flick of an eyelash that transforms the scene. She was doing that constantly in Herself. I lost my shit over Tina Kellegher playing the role of Gina because I’m mad about her. My favourite film in the whole world is The Snapper, which she’s Sharon Curley in.”

It was also Clare’s first time working with another Sharon.

“Sharon Horgan was the Executive Producer and flew over to be on set whenever she had a couple of days off from what she was doing in London,” Clare beams. “She’s incredibly supportive. I just watched her in Together with James McAvoy. Sharon’s acting in it is ridiculously good, so I loved having her around as a mentor.” 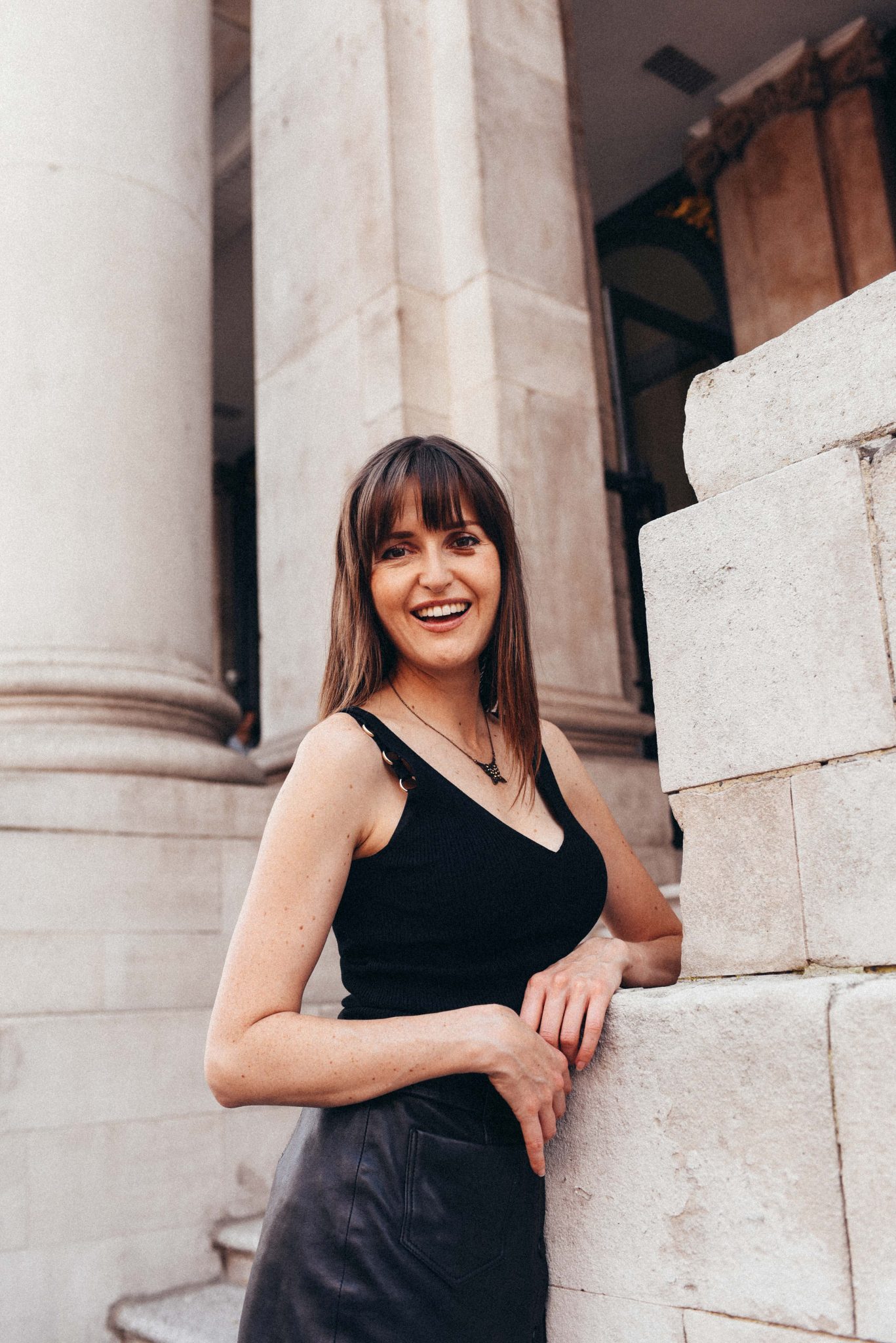 Asked to paint a picture of Phyllida Lloyd whose previous cinematic outings were Mamma Mia! and The Iron Lady, Clare laughs and goes: “That’s so funny, I was about to say Gandhi there! She’s the most humble leader you’ll ever work with. One day on set Lauren, who was interning as a sound girl, said to me, ‘Clare, Phyllida asked me what I thought of the scene there when we finished. Why did she do that?’ I was like, ‘In her eyes, everybody on the set is equal.’ Whether you’re involved as an actor, a set designer or an intern, Phyllida wants it to be your film as much as it is hers. She pushes you in ways that you maybe haven’t been before. I’m a little gooney wuss, but when we did the Donmar Warehouse’s all-female Shakespeare trilogy together, she had me kickboxing and doing jiu-jitsu! She’s incredibly encouraging in that way.”

And, more so than perhaps any other British director in recent times tuned into the Irish psyche.

“For the couple of years leading up to Herself, she was over every five or six weeks. My dad would drive her round the inner city and show her all the nooks and crannies. She wanted to get a feel for the architecture and the types of people. She was looking at it with new eyes and maybe telling us a few things about Dublin that we didn’t know or had forgotten.”

Elijah Hewson was seriously chuffed when I informed him that Inhaler are on the Herself soundtrack, as are Sia, Soulé, David Kitt, The Stunning, The Killers, Laura Mvula, B*Witched and The Cranberries with the near obligatory ‘Dreams’.

“Bono’s son didn’t know he was on the soundtrack?” Clare exclaims. “Wow, I hope he likes the film! I went through a phase of listening to The Cranberries’ albums on ‘repeat’ as a teenager. I loved Dolores. We must have cut some really good deals on the songs to have got ‘Dreams’!”

There’s also an ensemble rendition of ‘Whiskey In The Jar’.

“Yeah, we needed something really Irish in there and gave it our all. It’s from the heart and really works I think.”

It most certainly does. Herself’s modest budget is dwarfed by the $160 million that was lavished on her Spider Man adventures.

“Oh, look, I’m barely in it,” Clare says with her customary modesty. “It was fun, though, doing scenes with Jake Gyllenhaal who’s Mysterio, the baddy. I’m part of the back-up team that organises all of his illusions, presses the buttons and designs stuff. I’m kind of a computer nerd in it. I don’t think Mysterio would miss me if I wasn’t there!”

“Again, I feel so privileged to have been part of that,” she concludes. “Aidan’s cool and so funny. The moment I read the part I wanted it, and it’s turned out even better than I hoped.”

• Herself is in Irish cinemas now.