Your Final Chance To Be Listed As An Executive Producer In The Deluxe Platinum Edition of 'Why Can't We? The Story Of The Cranberries'
Stuart Clark

Signed by band members Noel Hogan, Mike Hogan and Fergal Lawler, and on behalf of Dolores O’Riordan, by her mother Eileen, Why Can't We? is the ultimate Cranberries collectible! And there's still a chance to get your name on the list of Executive Producers...

Having been on pre-sale for the past few months, WHY CAN’T WE? – The Story Of The Cranberries and the band’s iconic front-woman Dolores O’Riordan (As Told Through The Pages Of Hot Press) is within days of being printed – which means that this week is your FINAL chance to have your name included as an Executive Producer in the Deluxe Platinum Limited Edition of the book, which is signed by band members Noel Hogan, Mike Hogan and Fergal Lawler, and on behalf of Dolores O’Riordan, by her mother Eileen. For those lucky enough to secure a copy, it will doubtless become a hugely prized item of future-proof Cranberries collectors’ memorabilia.

Along with classic images and previously unseen shots from the Hot Press archives, our callout to fans has yielded a treasure trove of rare, in many cases unpublished photos of The Cranberries at work, rest and play. To whet your appetites, here's a look at Dolores getting jiggy with it in 1993 in Florida, courtesy of Jim Leatherman; and Noel and Dolores on stage in Madrid in 2012, as captured by Javier Patón Melgarejo (main pic). And there are dozens more powerful photographic rarities in what will be a wonderfully sumptuous book! 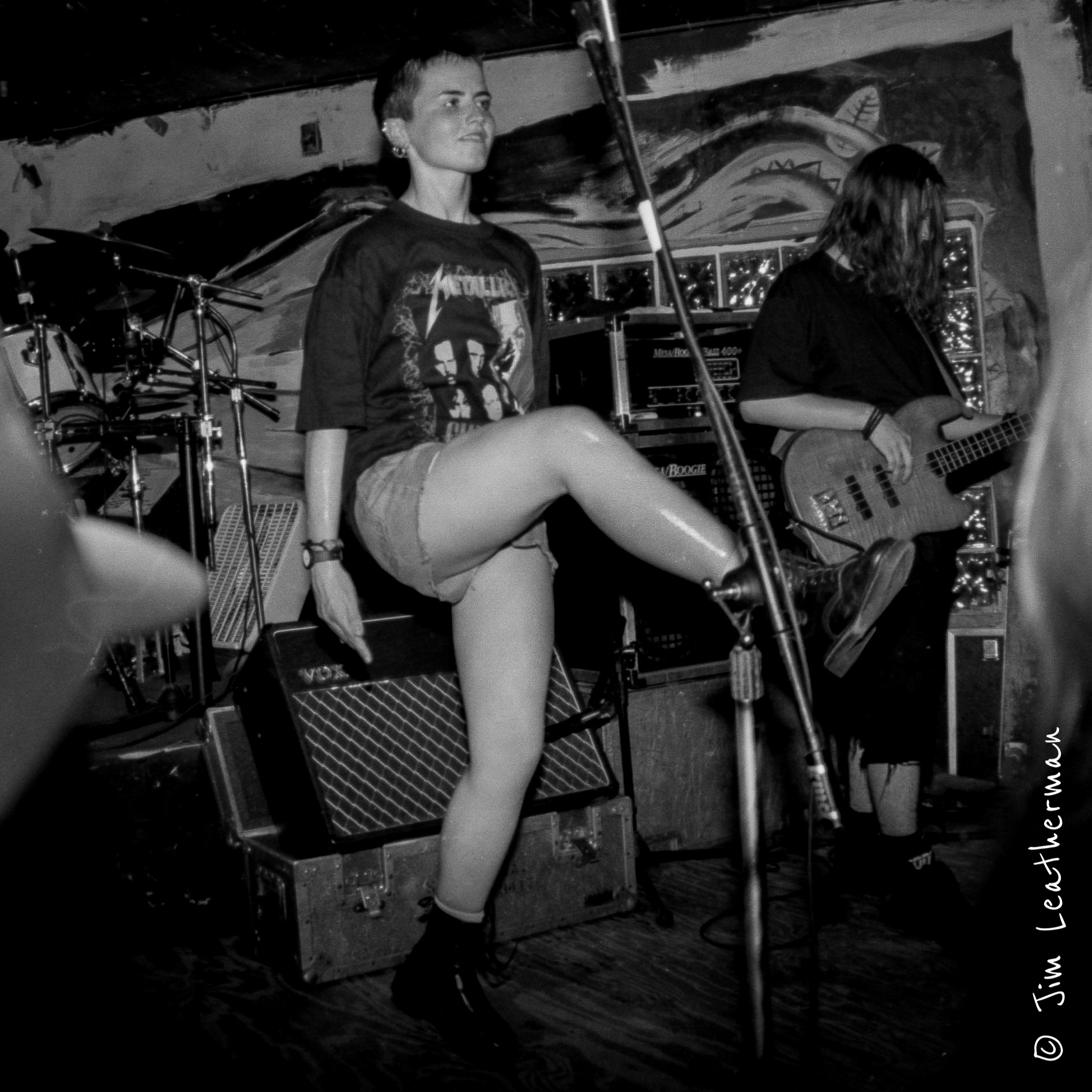 Fully supported by The Cranberries and by the estate of Dolores O’Riordan, Why Can’t We? documents the birth and extraordinary rise of a band that made a city – indeed the entire county of Limerick – proud, and through such instantly recognisable hits as ‘Linger’, ‘Dreams’, ‘Zombie’ and ‘Ode To My Family’, among many more, helped to soundtrack the lives and loves of millions of people all over the world.

Curated by Stuart Clark, Why Can’t We? is being published by Hot Press Books in two formats, the Deluxe Platinum Limited Edition – where you can have your name included as an executive producer; and the Special Gold Edition.

Along the way there were superb solo adventures undertaken by Dolores and side projects involving Noel. There was also fun, friendship, triumph, adversity, controversy and, ultimately, the gut-wrenching tragedy of Dolores’ sad death on January 15th, 2018 in London.

“We covered every step of The Cranberries’ – and Dolores’ – journey in Hot Press,” editor Niall Stokes said. “The magazine has always enjoyed a very close, personal working relationship with The Cranberries crew. It is fantastic that this will now be immortalised in Why Can’t We?. Fans can rest assured: it is going to be an extraordinary and very beautiful, must-have book. The opportunity to be listed as an executive producer personalises it even more for fans – so this is genuinely a once-in-a-lifetime opportunity.”

Welcoming the announcement, Noel Hogan of The Cranberries said: “Stuart Clark wrote the first press release that we ever did, as The Cranberry Saw Us, so it will be great to see his name on what promises to be an absolutely brilliant, blow-by-blow account of the incredible adventure we embarked on, all those years ago. We’ve always had a fantastic relationship with Hot Press, so I think fans are going to really relish re-living all of the highs, as well as the sadness and the pain, as told through the pages of the magazine.”

Fergal Lawler adds: “I think fans are going to love Why Can’t We? Stuart Clark and Hot Press were there from the very start with the band, and Dolores was such a great interviewee. It is a fantastic way of remembering her, and of celebrating the music that was her life’s work.”

Dolores’ mother Eileen said: “This is a unique and fascinating way to tell the story of the band, and of Dolores’ solo musical exploits. I think she would be delighted with it.”

FULLY UP-TO-DATE
The Deputy Editor of Hot Press, Stuart Clark was an ally and confidante of the band, going back to their earliest Limerick days and offers his own candid insights into the people and the personalities – and into how The Cranberries became one of the biggest bands on the planet.

• Beautifully designed and printed
• Original interviews with Dolores and the band
• Dozens of never before seen pictures
• Exclusive memorabilia
• Brand new contributions from Michael Stipe, Simon Le Bon, Olé Koretsky & more
• All the action as it happened in the career of Dolores O’Riordan and the band she fronted, The Cranberries
• One-year digital subscription to Hot Press (worth €40)

• Beautiful large hardback format 325mm x 258mm
• Personally signed by Noel Hogan, Michael Hogan, Fergal Lawler and Dolores’ mother, Eileen O’Riordan
• Pre-purchasers will have their name included in the book as an Executive Producer
• Limited edition of 1,000 copies
• Every copy individually numbered
• Comes with specially designed slip-case
• Beautifully designed and printed
• Original interviews with Dolores and the band
• Dozens of never before seen pictures
• Exclusive memorabilia
• Brand new interviews with Michael Stipe, Simon Le Bon, Olé Koretsky & more
• All the action as it happened in the career of Dolores O’Riordan and the band she fronted, The Cranberries
• 32 pages of additional exclusive material, including never before seen photographs
• Complimentary A4 art print of The Cranberries’ first ever Hot Press cover
Two-year digital subscription to Hot Press (worth €80)

THE BACKGROUND
U2 was the biggest band in the world when, on November 18th, 1989, a band calling themselves The Cranberry Saw Us played their first live gig in the Flag Café, on Limerick’s Broad Street. As the troubled 1980s ground towards an end, the likelihood of four indie kids from a provincial Irish city joining the chart-topping, globe-trotting band from the Northside of Dublin on the global stadium circuit hovered somewhere between zero and none. What happened over the next thirty years is one of the great rags to riches rock ‘n’ roll stories.

As the entertainment man at the Limerick Tribune newspaper, and presenter of the Radio Limerick One rock show, Stuart Clark was there to witness the birth of The Cranberries. He wrote the band’s first press release for which he received a bottle of Jack Daniel’s in return; conducted their first print interview; and was in the DJ hot seat for Dolores O’Riordan and Noel Hogan’s broadcasting debut. One of those press releases, and the demo tape of songs it accompanied, found its way to Hot Press who also became early champions of The Cranberries and offered Stuart a job.

Recalling the eager 18-year-old he first met just after she’d left school, Stuart says: “Dolores O’Riordan was smart, loving, loyal, dedicated and as funny as f*ck. Hers was a truly unique and special talent. Alongside her three brothers-in-arms in The Cranberries, Ferg, Mike and Noel, she gave Limerick what it had always craved – a world-beater of a band who proudly represented the city wherever they roamed.

The Cranberries have sold over fifty million albums; won an Ivor Novello and numerous MTV awards; been honoured with their own Irish postage stamp; and had their music featured in such smash hit films and TV shows as Mission: Impossible, Click, Family Guy, Clueless, Inside Amy Schumer, Charmed, The Sopranos, Beverly Hills, 90210 and Derry Girls. The video for ‘Zombie’ has amassed over a billion YouTube streams, and along with ‘Dreams’ has passed the three million plays mark on US radio.

Formats: Why Can’t We? The Story Of The Cranberries and the band’s iconic front-woman Dolores O’Riordan (As Told Through The Pages Of Hot Press) comes in two formats and can be pre-purchased now from shop.hotpress.com. The individually numbered De Luxe Platinum Limited Edition allows purchasers to be listed as an Executive Producer.

Other titles published by Hot Press Books include Covered In Glory: The Hot Press Covers Book by Niall Stokes; Philip Lynott: Still In Love With You by Niall Stokes; and the No.1 best-seller, My Boy, by Philomena Lynott and Jackie Hayden. All are available from shop.hotpress.com

Lisa McGee: "I wanted the Derry Girls ending to feel quite final"
A World Shrouded in Darkness And Evil: Hunger, War, Authoritarianism, and the Subversion of Women’s Rights
National Maternity Hospital: It Is Time For A Rethink At The Top

Hot Press Attends Launch Of Slane Extra Sherry Wood
Take Me Back To Tulsa: The Bob Dylan Archive Is Open, May 2022
Minister Catherine Martin announces additional €10.5m for BAI to fund climate action, live music and Irish language broadcasting
Your Guide To Community Festivals In Ireland This Summer – Brought To You By XL
Campaigners repeat calls for independent public inquiry into George Nkencho's death
Vladimir Putin: How Can We Bring Him To Justice For His Monstrous Crimes Against Humanity?