A report in the Irish Times on Saturday suggests that a new sweetheart deal has been agreed between the St. Vincent’s Healthcare Group – who can only be seen as proxies for the Religious Sisters of Charity – and the Department of Health in relation to the ownership and the running of the new National Maternity Hospital. A group opposing the deal is organising a vigil to mark the 9th Anniversary of the death of Savita Halappanavar.

A vigil will take place on Thursday 28 October, outside the Dáil to remember Savita Halappanavar, who died of sepsis, having been refused a termination at University Hospital Galway, despite the fact that she was extremely ill. Savita died in 2012. The vigil will mark the 9th anniversary of her desperately tragic and wholly unnecessary death.

In retrospect, Savita’s shocking loss of life can be seen as a pivotal event in the struggle to deliver control over their own fertility to Irish women. However, the vigil – which is being organised by the Our Maternity Hospital campaign – will also serve to highlight the deeply wrong-headed compromises that are currently being discussed in relation to the co-location of the proposed new National Maternity Hospital on the grounds of St. Vincent’s Hospital at Elm Park, where the Religious Sisters of Charity have amassed huge tracts of extraordinarily valuable land.

"We read with interest the Irish Times report of fresh proposals which would ‘finally settle the row' over the proposed new National Maternity Hospital,” a statement issued by Our Maternity Hospital said. "Of course, they do no such thing and are merely a smoke and mirrors exercise to deflect from legitimate concerns around ownership, and the intransigence of an organisation determined to hold on to a valuable asset."

The ‘fresh’ proposals involve increasing the length of the lease being ‘granted’ by the religiously-controlled landlords – the St. Vincent’s Healthcare Group – to the State from the 99 years they had originally insisted on to 299 years. They also involve an increase in the so called “public interest directors” from one to three.

The Irish Times report stated that the board of the National Maternity Hospital had voted in favour of the new proposals, and that they had been “agreed” by the Department of Health. However, the board of the HSE have yet to formally discuss the proposals. The buck will finally stop with the Minister for Health, Stephen Donnelly, and with the Government.

“There is no way that the Government should agree to this proposed arrangement,” Hot Press editor Niall Stokes said. “The cards have been shuffled, but the fundamental issue is the same: that the religious interests behind the St. Vincent's Healthcare Group will pursue a Roman Catholic agenda in any and every way that is open to them. This will include attempting to infect the ethos of the National Maternity Hospital with religiously-derived attitudes and approaches. It will involve an attempt at every stage to impose deference to the ideology of the Roman Catholic Church. And ultimately, it will also be to quietly and single-mindedly work behind the scenes to push back against the legalisation of abortion that occurred following the Referendum to Repeal the 8th Amendment.

“How many of the people behind the St. Vincent’s Healthcare Group were anything other than strongly antagonistic to the removal of the 8th Amendment? If there are any, I suggest that they come forward and say so. The nuns who are depicted as 'gifting' the land to them were – and are – utterly hostile to anything other than the most minimalist possible interpretation of when abortion is to be recommended – that is, if a pregnant woman is about to die unless there is an intervention that ‘might’ mean the loss of the embryo.

“It is the dedicated, ideological belief of these religious vested interests that the ‘right to life’ of the embryo is exactly equal to the ‘right to life’ of the woman who is pregnant. Nothing has changed in relation to that. And so it is unconscionable that the Government would now hand over any say whatsoever in the running of the National Maternity Hospital to vested interests of this kind.” 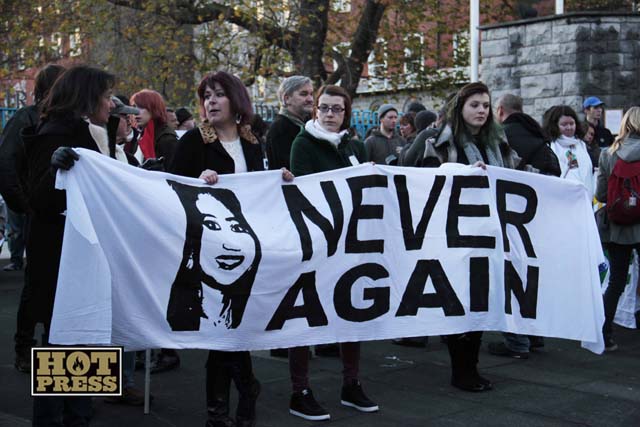 That view is echoed by the Our Maternity Hospital campaign, organisers of the vigil for Savita.

"Extending the length of a lease over the site, which the St Vincent’s Healthcare Group insists it must own for 'clinical, governance and operational reasons' does nothing to instil confidence regarding the independence of the new hospital,” the Our Maternity Hospital campaign said. "If ownership of the site is necessary for governance, the State must own it."

The campaign has also dismissed the increase in the number of non-affiliated directors as “smoke and mirrors.” The Irish Times report suggests that the new board structure would include three representatives from the St. Vincent's Healthcare Group, three from the National Maternity Hospital and three “public interest” directors.

"Increasing the number of public interest directors on the board of a private charity cannot obscure the fact that this board will govern the operations of a publicly funded hospital built on religiously owned land,” the statement said.

"We remain unconvinced of the wisdom of transferring the National Maternity Hospital to the St Vincent’s site, and vehemently opposed to the handover of a publicly constructed, publicly funded facility to a private charity. We are further opposed to the involvement of the St Vincent’s Hospital Group in the running of what must be a fully secular hospital – assurances of independence notwithstanding.”

Hot Press editor Niall Stokes also questioned why any religiously controlled group should have three members on the board of the new National Maternity Hospital.

“The vigil for Savita is really important," Niall Stokes said. "Coming from an entirely different cultural and religious background, she died because she was treated according to the demands of the Roman Catholic Church in relation to abortion. So why is anyone considering an agreement that will potentially enable this to happen again in the future?

"It is inescapable that allowing three board members to the St. Vincent's Healthcare Group is a form of sectarianism,” Stokes added. “And it is completely inappropriate to the new Ireland that has emerged over the past number of decades. No one religious faction should be handed a dominant position in the National Maternity Hospital by the State. Right now, we are faced with the extraordinary dilemma that the Catholic Church in Ireland, and the orders that carry out its instructions are frustrating at every turn the attempt to provide equal educational opportunity in Ireland for people of every background or belief. People who do not subscribe to any so called ‘faith group’ are blatantly discriminated against in Irish education. Why would we, in 2021, walk into exactly the same kind of arrangement, where a Roman Catholic ‘ethos’ is mobilised against everyone who is not Roman Catholic, in the National Maternity Hospital?

“It is up to the progressive politicians in the Cabinet to ensure that this does not happen. If they fail in this, and cede the permanent right to three board members to what is a sectarian, religiously controlled institution, then they will have failed the Irish people."

• A quiet vigil will be held at the Dáil on Thursday 28th October, at 5.30pm, to remember Savita Halappanavar on the ninth anniversary of her death, and to highlight the need for public, secular ownership of our new National Maternity Hospital.

New Irish Songs To Hear This Week
100 Voices #AllAgainstRacism: Cen Manu – "Racism is still very much at large worldwide – and Ireland is not immune"
In The New Issue: Joy Crookes and The Beatles Star in Flip-Cover Special