The controversy around the ticket sales of Taylor Swift's tour through Ticketmaster has caused controversy all over the US, now reaching congress.

Ticketmaster's handling of the sale of Taylor Swift's The Eras Tour has led to a US Senate antitrust panel holding a hearing on the lack of competition in the ticketing industry in the USA.

The news came after TSwift fans reported technical problems during the Ticketmaster pre-sale for The Eras Tour on Tuesday, November 15, including lengthy wait times, website outages and what is called 'surge pricing' sending ticket prices through the roof.

Following this mass hysteria, Ticketmaster revealed there had been “historically unprecedented demand” as “millions” of fans attempted to secure tickets. Reportedly, 14 million people tried to purchase tickets through the site that day. 2.4 million people made successful purchases.

Now, Reuters reports, Congress plans to hold a hearing around the lack of competition in the ticketing industry. A date has yet to be confirmed. The news was broken by Senator Amy Klobuchar, who is chair of the panel, yesterday, November 22.

“The high fees, site disruptions and cancellations that customers experienced shows how Ticketmaster’s dominant market position means the company does not face any pressure to continually innovate and improve,” Klobuchar said.

“We will hold a hearing on how consolidation in the live entertainment and ticketing industry harms customers and artists alike.”

In a statement on Friday, November 18, Taylor Swift said that Ticketmaster had “assured” her it would be able to handle the huge demand, as she was nervous to give over any bit of control for the tour. Swift acknowledged how some fans had “such a hard time trying to get tickets," apologising for what they had to go through. 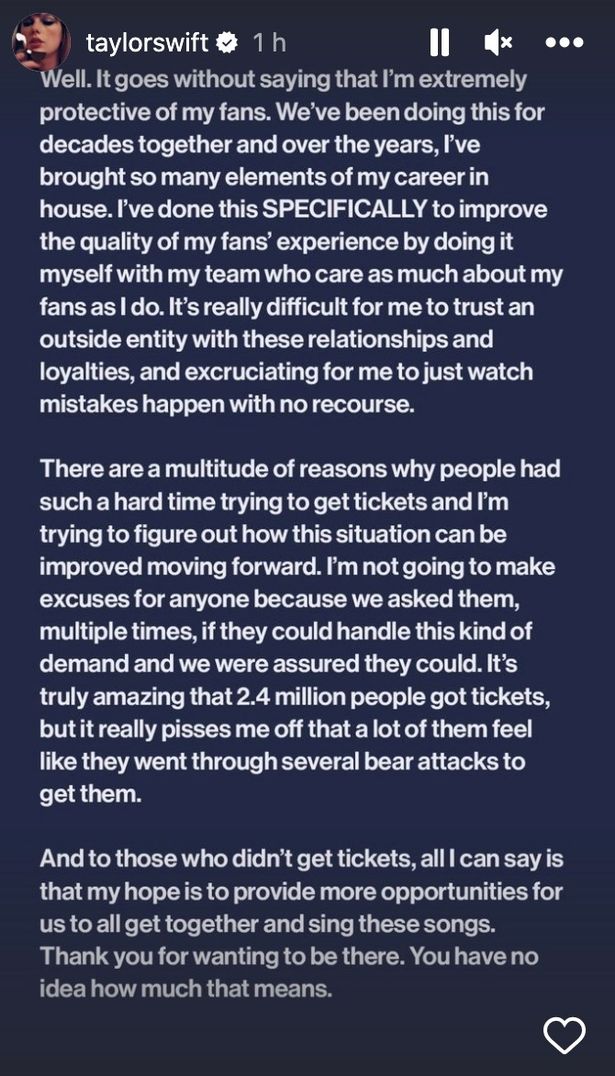 After the musician's statement, Ticketmaster issued an apology to fans who had a “terrible experience” in navigating its website. “We strive to make ticket buying as easy as possible for fans,” they said.

Reportedly, the United States Department of Justice is opening an antitrust investigation into Live Nation, the company that owns Ticketmaster. Live Nation and Ticketmaster merged to form Live Nation Entertainment, back in 2010, with the Justice Department accepting the merger, at the time. However, the deal was amended in 2019 due to what were characterised as violations of the original deal.

It has been suggested that approximately 70 per cent of the live music industry is currently dominated by Live Nation Entertainment.

New York Congresswoman Alexandria Ocasio-Cortez spoke out about the Swift saga, tweeting: “Daily reminder that Ticketmaster is a monopoly, its merger with LiveNation should never have been approved, and they need to be reigned in. Break them up.”

Ticketmaster denied any anti-competitive practices in a statement, and said it remained under a consent decree with the Justice Department following the 2010 merger. Additionally, the company said there was no “evidence of systemic violations of the consent decree."

In a letter on Monday, November 21, Klobuchar alongside two other lawmakers, said that Ticketmaster and Live Nation Entertainment should be broken up by the Department Of Justice should any misconduct be discovered.