The previous frontman of the Pogues has discovered a new creative outlet, in the form of art, with his first London show almost completely sold-out.

Shane MacGowan, former frontman of The Pogues, has realised a new talent of his, in the form of art.

In a conversation with the Observer, MacGowan said he was bemused and amazed by the positive response to his first London art show. “I was just blown away by the whole thing,” he remarked.

The 64-year-old also learned that his Knightsbridge gallery has sold almost all of his work on display and extended his show.

MacGowan's influences include Caravaggio and the impressionist school, he said, but he sees himself as “a realist who can’t draw very well."

“I am a primitive artist really," MacGowan adds. "I drew them to amuse myself on boring journeys on pieces of paper and sick bags and things. I suppose I’m just creative. People have told me I am.”

The drawings sold at high speed over the first few days of the show at Andipa gallery, including a piece capturing Grace Jones which was bought by Kate Moss, according to MacGowan's wife, author Victoria Mary Clarke.

“Kate (Moss) always has very cool art in her homes so I was very pleased she liked it,” she said. “And the band Fontaines D.C. bought Shane’s very strong, almost aggressive portrait of Bono, so they were all Irish bands together.”

Visitors to the show, titled: 'The Eternal Buzz and the Crock of Gold', will find many of the images have already gone.

No prints of the artist's work are available, so the prints are all one of a kind. "Shane doesn’t like to repeat himself," Victoria added.

Due to a lack of prints or copies, MacGowan has developed a supply problem. With most of his drawings done in the '80s while the musician travelled, the pieces are running out.

Shane's wife, Victoria, has recently explained the context of his art through captions in a piece with the Guardian. She has chosen to explain the art with anecdotes and insight into the history behind the art. 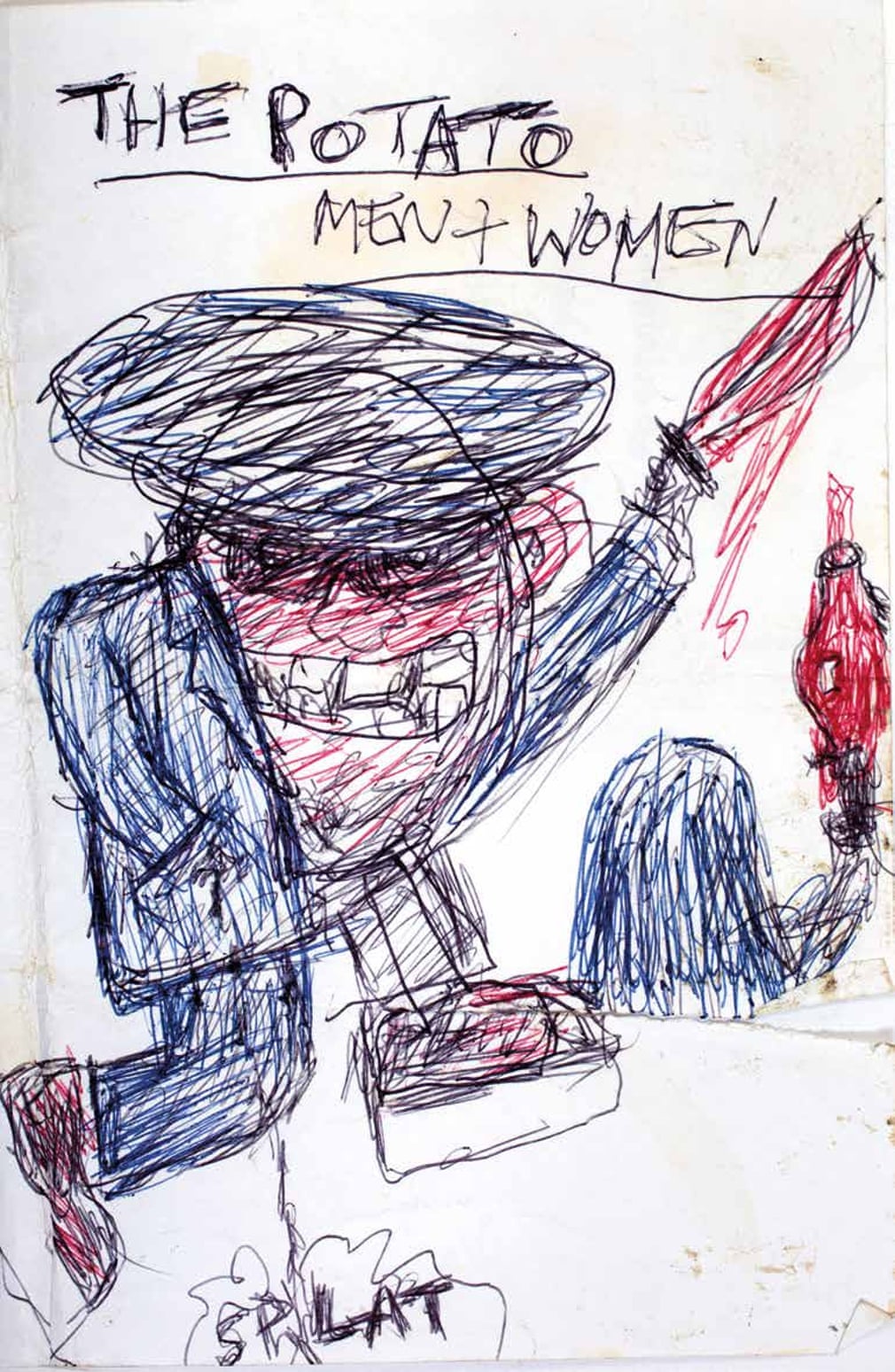 Victoria spoke about Shane's childhood, explaining that when he was a young child, Shane's mother would give him potatoes to carve into people when he was sick. The artist's wife described how Shane would like to turn the potatoes into IRA men and women. The cottage Shane grew up in, in Tipperary, was previously a "safe house" for IRA members who were on the run during the civil war. The artist and musician's imagination was lit up by the stories and songs he heard about the battles with the British ‘Black and Tans’ in the neighbourhood. He admired "daring revolutionaries such as Dan Breen and Michael Collins," his wife explained. 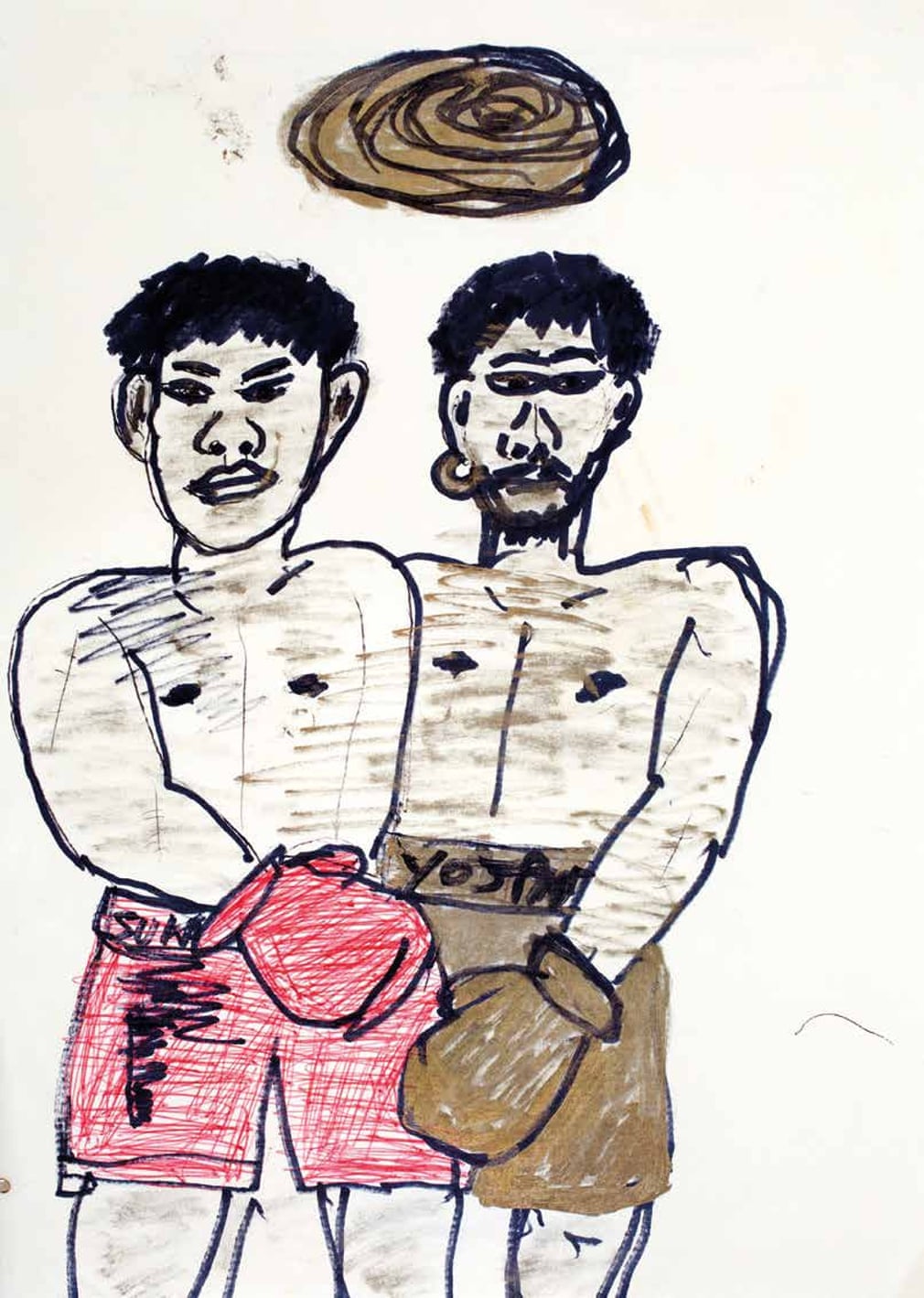 MacGowan travelled to Thailand regularly in the late 1980s. He had been introduces to the country by his old road manager, known as Big Charlie. Initially, the attraction was the atmosphere and how friendly the Thai people were. However, it quickly became how readily available drugs were, as well as the hallucinogenic Mekong whiskey and Singha beer. During his trips to Thailand. the artist spent a lot of time in late-night bars, playing pool with prostitutes and watching Thai boxing matches, often-times getting to know the boxers. 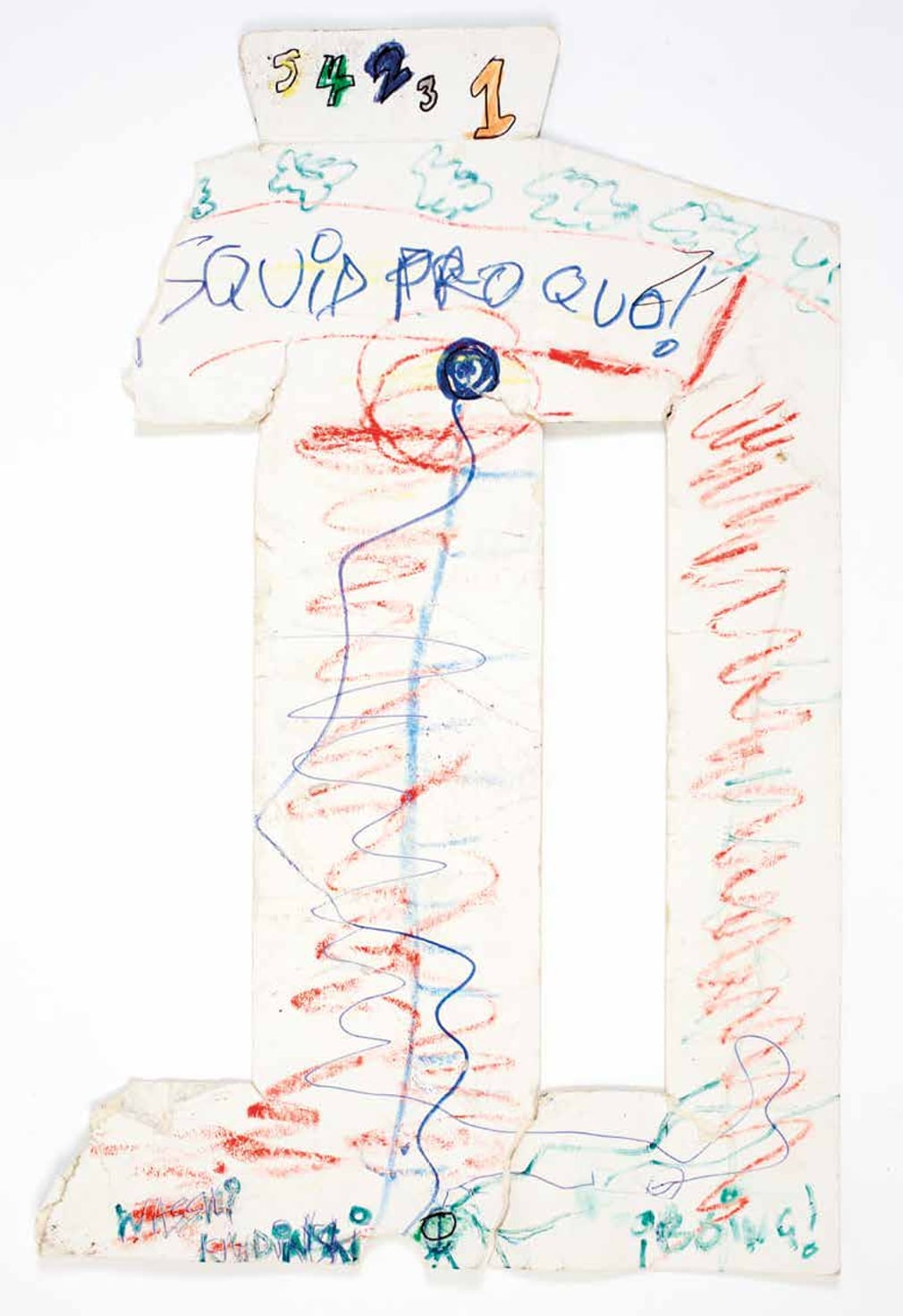 While touring New Zealand, MacGowan frequently took a lot of very strong speed. While high, the artist and musician developed an obsession with squids and octopuses. MacGowan drew 'Squid Pro Quo' with pastels, creating a shape by ripping up paper and attempting to make a figure with legs. Being an admirer of Kandinsky, the artist chose to sign the piece "Wassily Kandinsky." 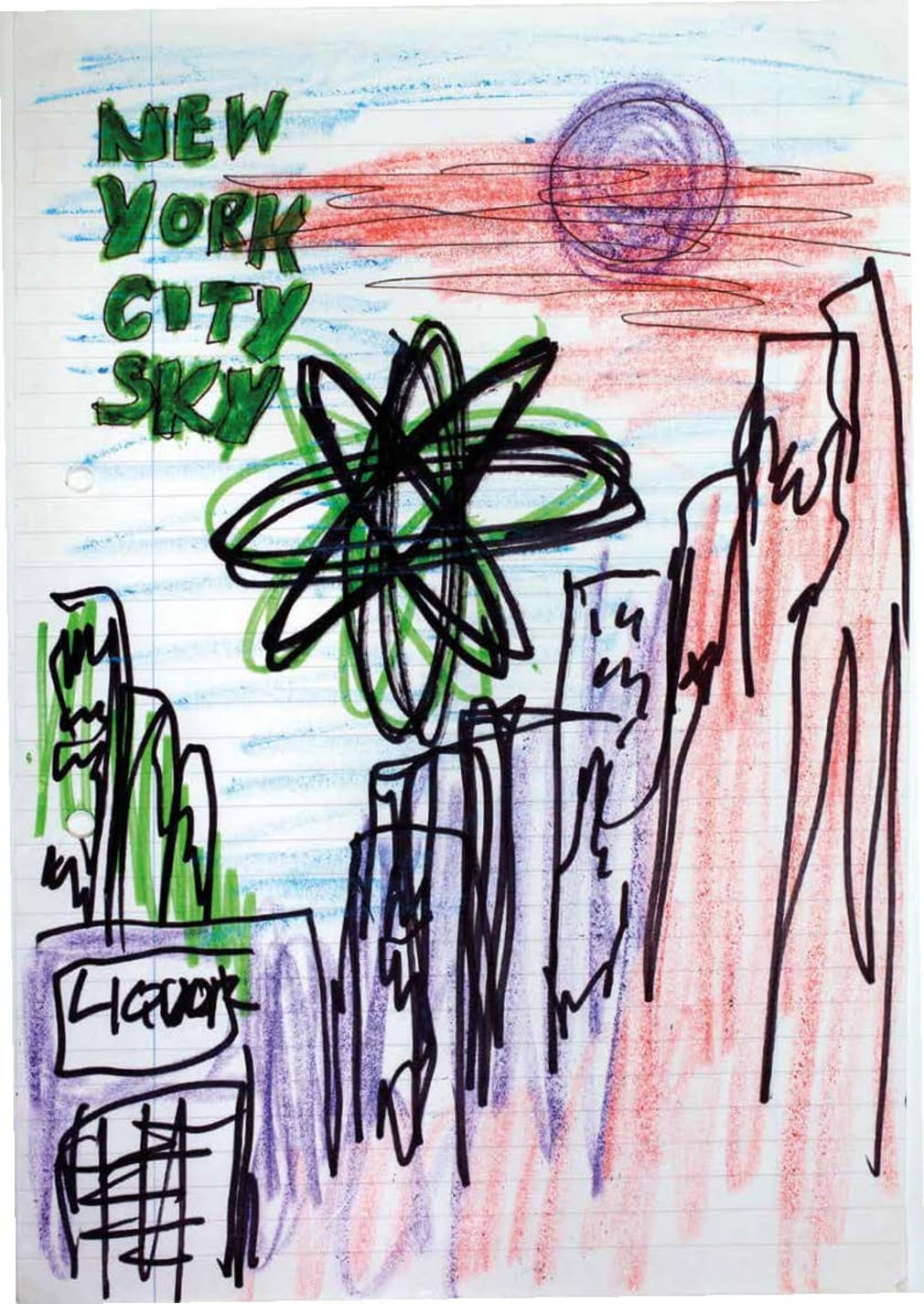 When the Pogues were touring America in the late '80s, Shane spent a lot of time hanging out at the Chelsea Hotel and meeting writers, artists, actors and filmmakers. According to his wife, New York had a romantic appeal to the artist. It appeared as a place where people came to reach for the stars on Broadway and where people lost their luck, living desolate and broken lives. It was also incredibly easy to find drugs in New York City, which was an added bonus for MacGowan. "Shane liked to wander the streets late at night looking for crack and heroin," Clarke revealed. 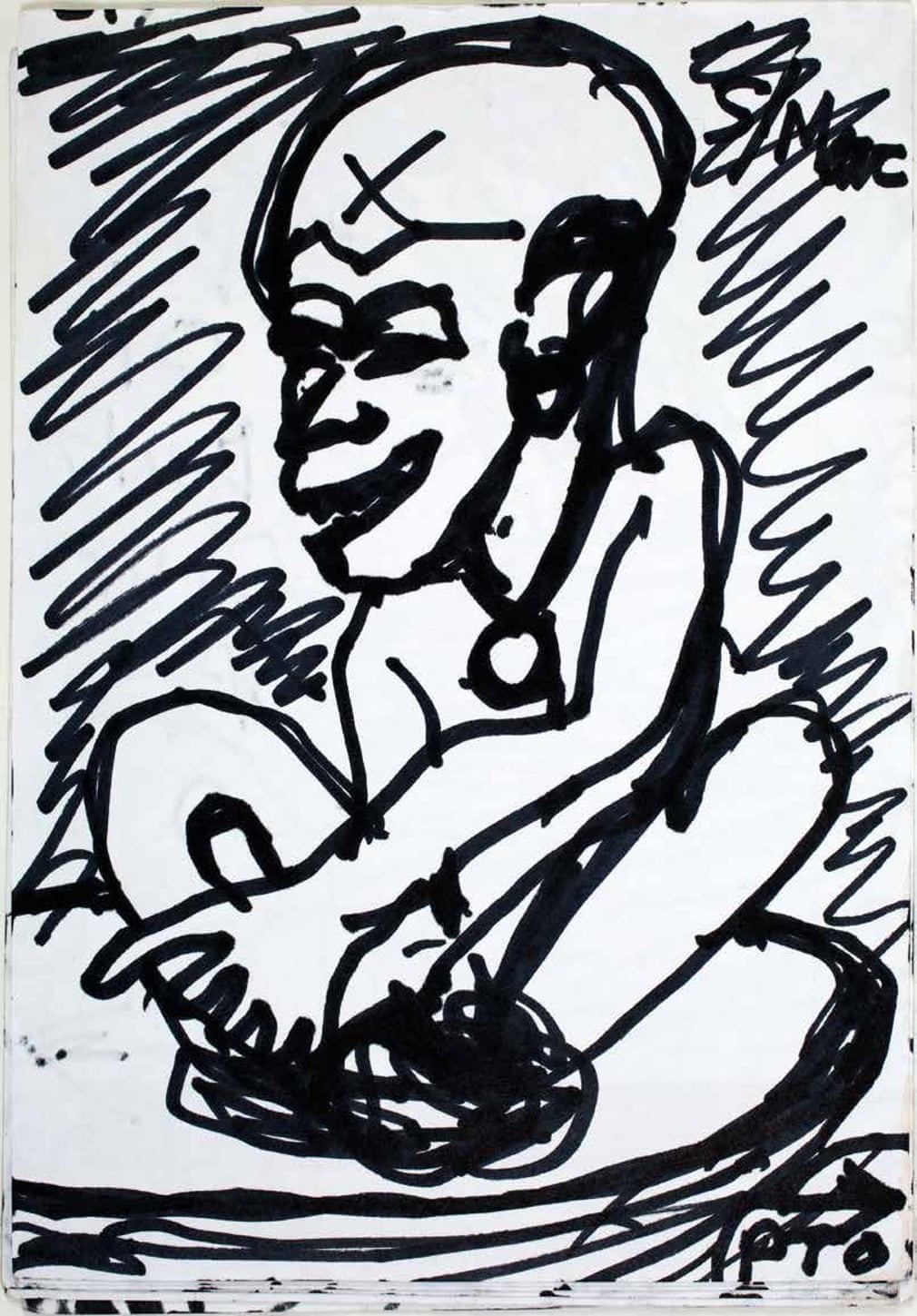 Much like the image of Thai boxers, this piece is inspired by the wild and free lifestyle that a hide-out like Thailand provided for MacGowan. 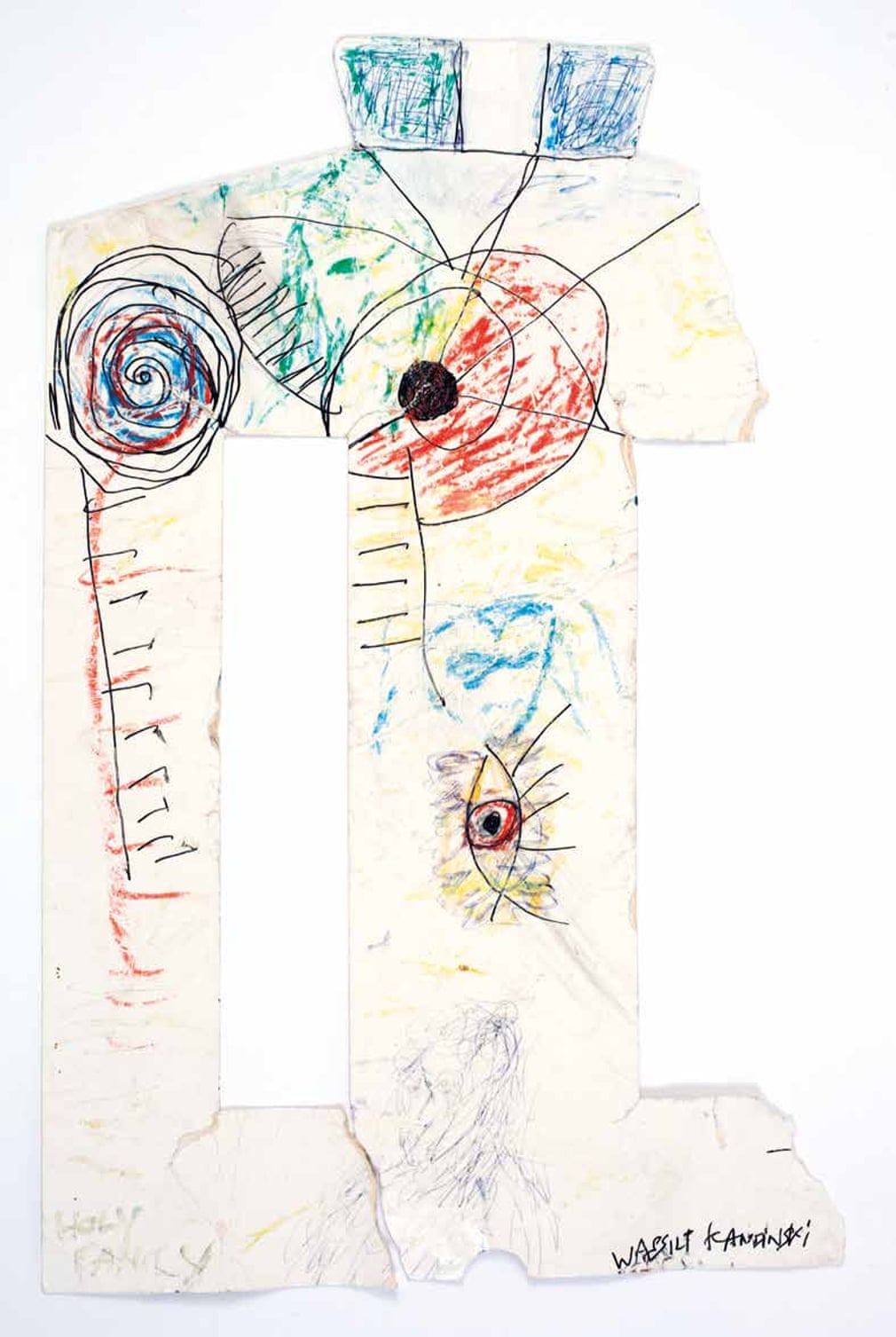 For a lot of artists and musicians, acid provided a trigger for intense artistic expression, both musically and visually. Shane frequently took acid while on tour and would always make sure to have paints, pastels and felt pens on him to experiment with. 'Squid Pro Quo' reflects the artist's obsession with these deeps sea creatures. 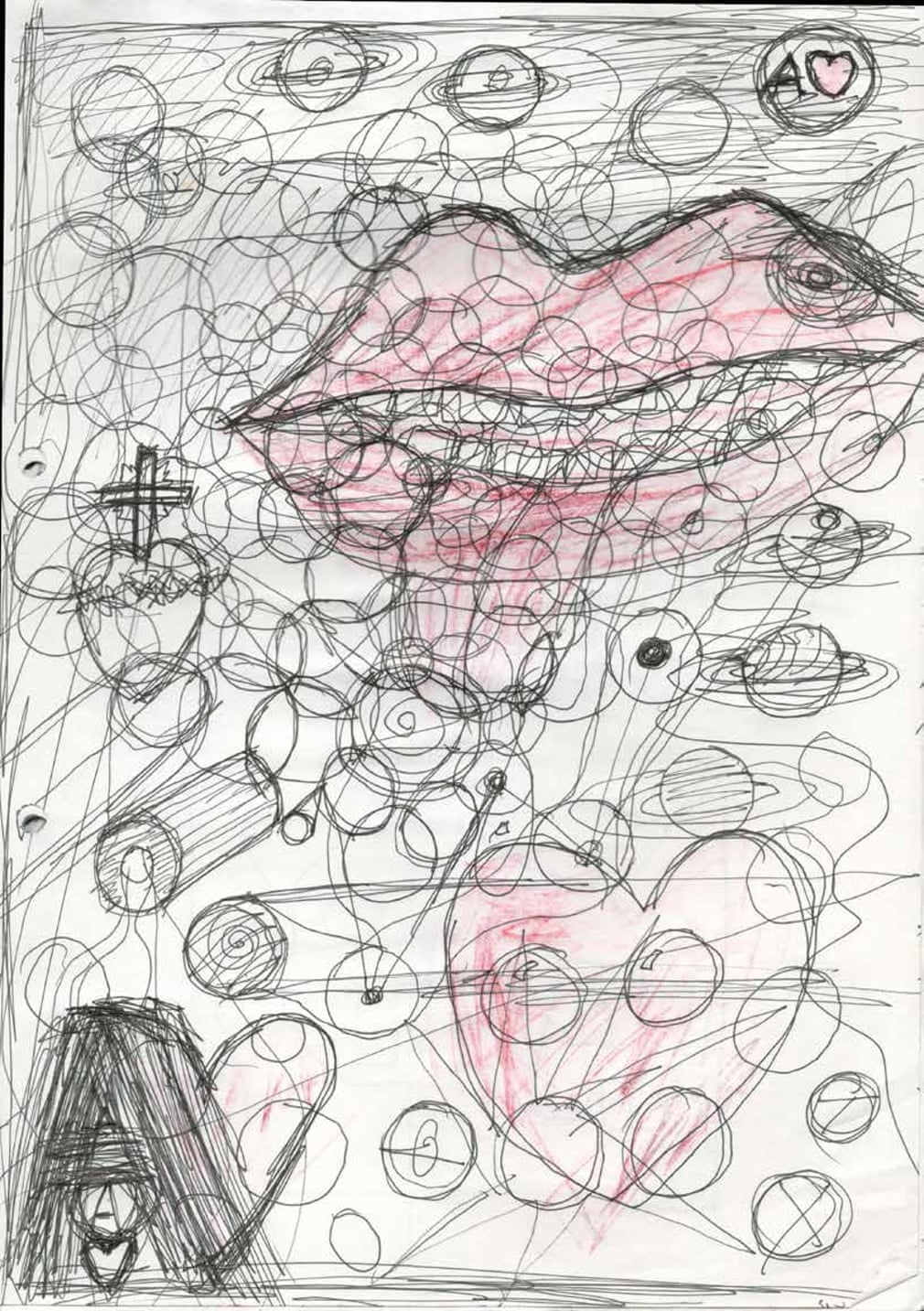 Developing a large taste for drugs, particularly acid, in the '80s, Shane was taking upwards of 100 tabs a day, for a time. During one particular trip in Kentish Town, Shane believed he had entered Victoria's womb. A lot of the work Shane produced around that time was deeply religious and filled with esoteric symbols which apparently appeared as he was tripping. Around this time ‘Lady Victoria’ was created. 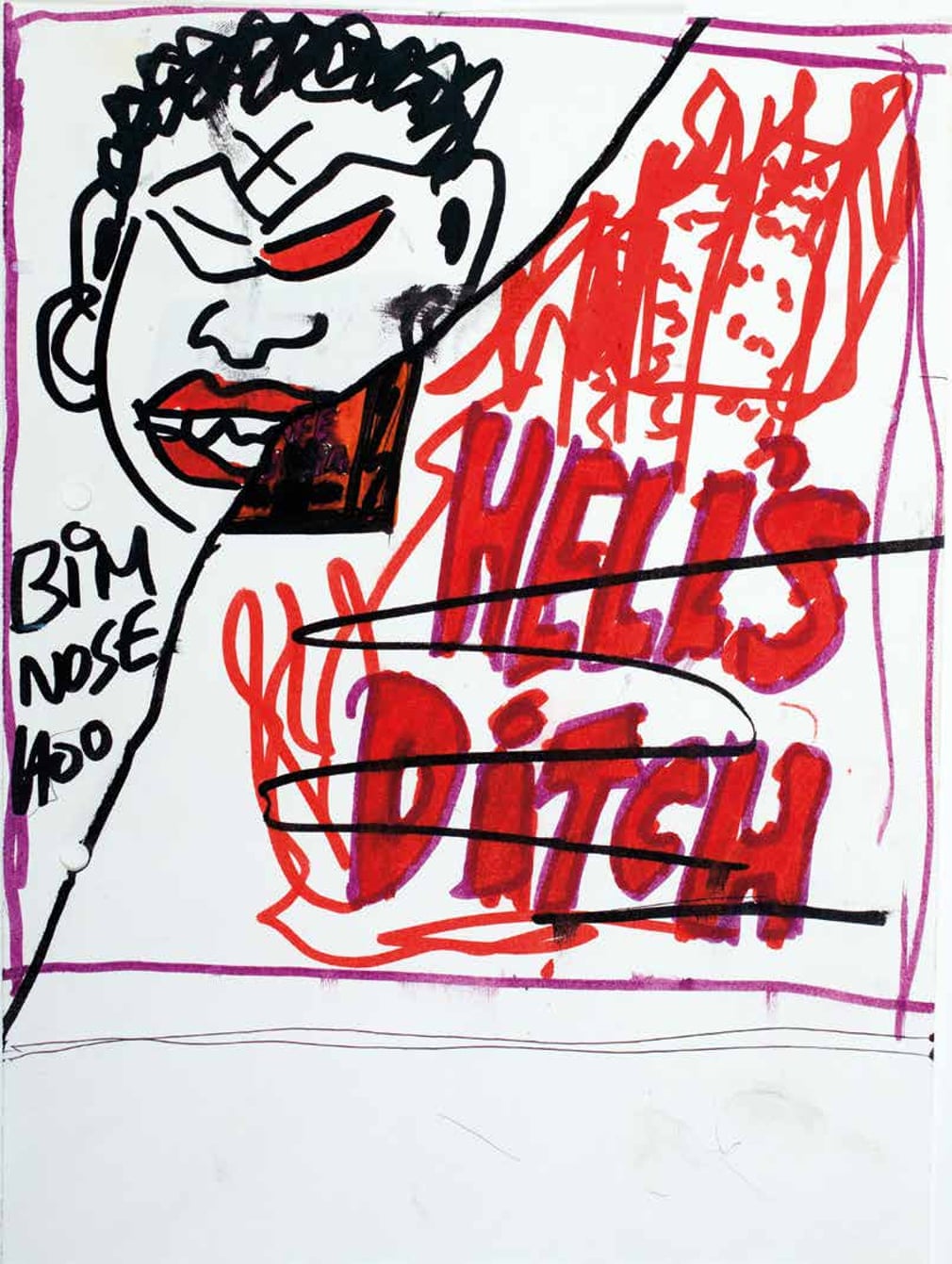 Throughout his career, Shane spent a lot of time drawing and painting album covers and potential album and single sleeves. Most of these album ideas went through many different ideas and versions, including the ‘Hell’s Ditch’ series. The Pogues Hell’s Ditch album art wasn't one of his designs. 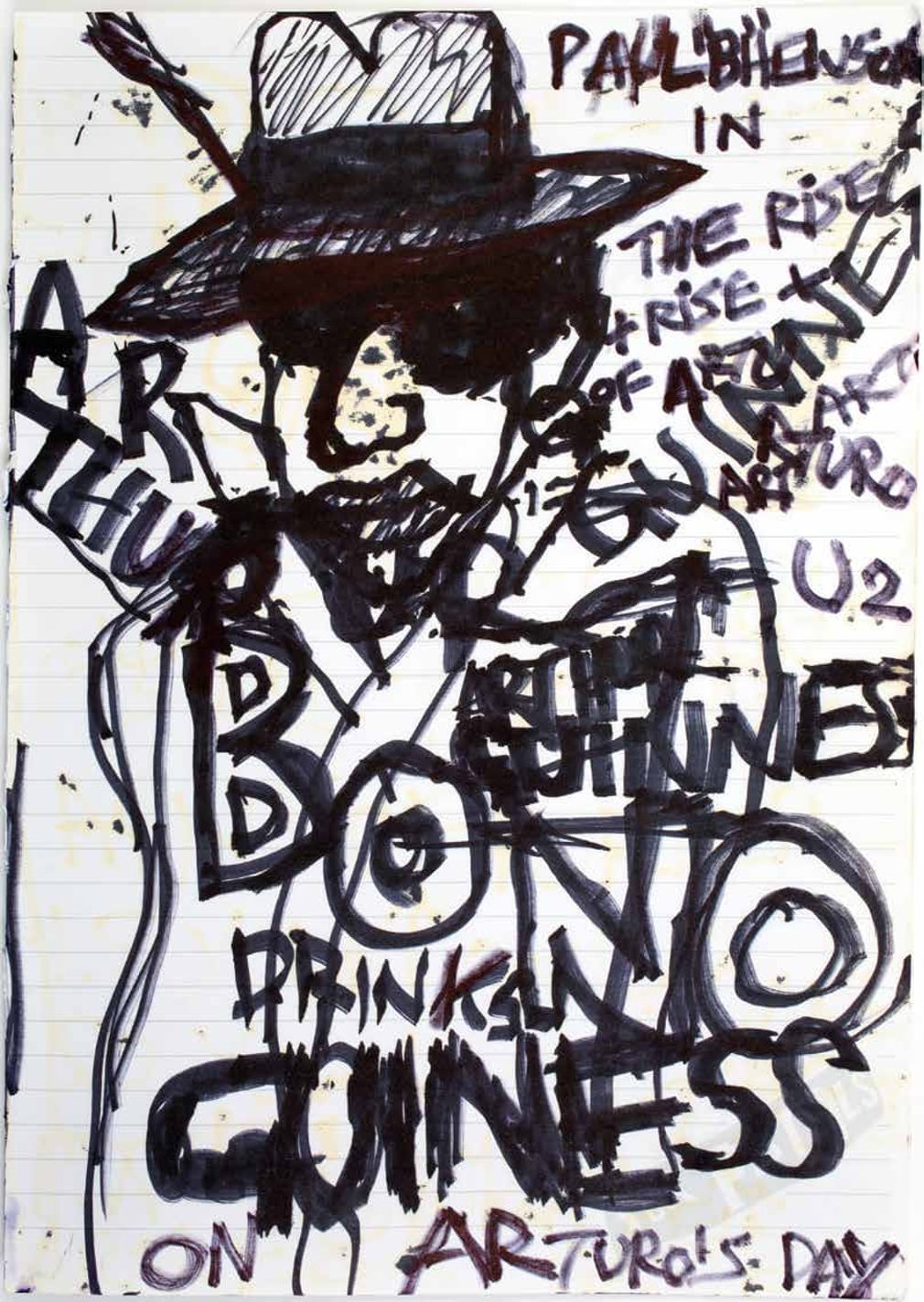 The Pogues first met U2 in the '80s when they were invited to support them at a show. Shane and Victoria always enjoyed philosophical and theosophical discussions with Bono, who became a lifelong friend of the two. "Bono can be a serious guy who likes to search for meaning," Victoria confessed. "But he is also a great man for a party." Just after Shane had been fired from the Pogues in the '90s, him and Victoria moved into Bono's Martello Tower in Dublin. The three spent many a night drinking Guinness together, Victoria confirmed. 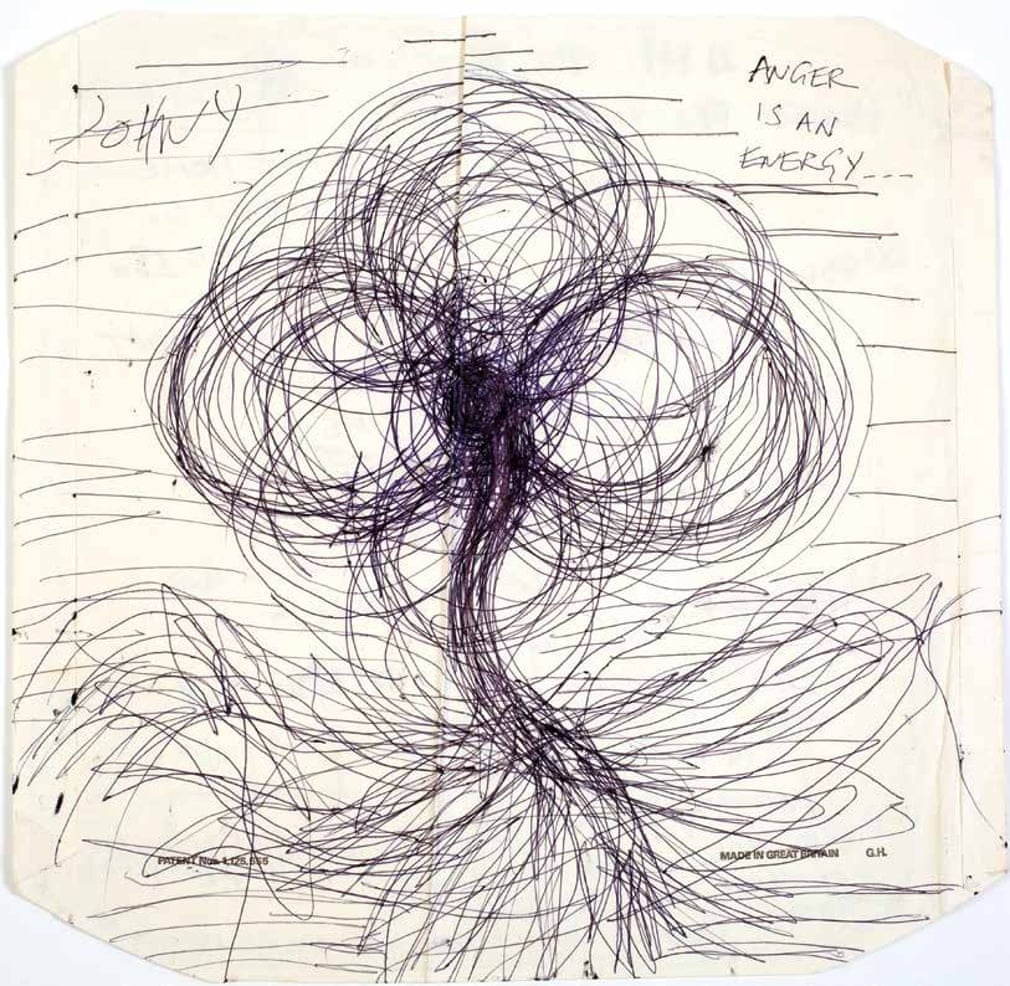 Anger is an Energy

Having spent his eighteenth birthday hospitalised due to an acute situational anxiety diagnosis and six month stint in prison, it appeared Shane had been trying to medicate himself for anxiety but had had a nervous breakdown. The mental hospital convinced the artist that he was sane, but he was adamant he came out of it seething with anger. The Sex Pistols was the first band that Shane saw after his release. Eventually, Shane became close friends with Sid Vicious who nicknamed the artist "Bondage" because of the former Pogues frontman's self-produced Bondage fanzine.

MacGowan fell and broke his pelvis in 2016 and later fell and broke his knee and then ended up tearing ligaments in his left knee, injuries from which he has never fully recovered. The former frontman of the Pogues has been in a wheelchair ever since, suffering from mobility issues.

Thursday Lates series at the National Gallery of Ireland to continue next week
Irish artist Asbestos condemns Taoiseach's use of his 'What is Home?' mural on TikTok
Event celebrating Irish writer Mary Lavin to feature Steve Wickham, Catherine Byrne and more
Scene + Heard 2023 is cancelled due to lack of funding
'Thank you, Ireland' festival in Howth to be held in support of Ukraine
Inclusive PIMA! Fest announced for Ennis, Co. Clare