Netflix announces new TV series 'I Am Not Okay With This'
By: Tanis Smither

The series comes from the producers of 'Stranger Things' and the director of 'End of the F***ing World'.

In an announcement made Tuesday, Netflix revealed a new series called I Am Not Okay With This. The series will premiere on February 26th, and includes Sophia Lillis and Wyatt Oleff (both of the It franchise) in its main cast. 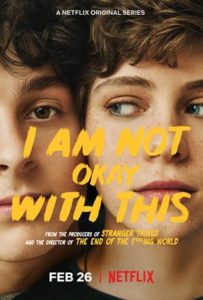 I Am Not Okay With This follows a teenage girl (Lillis) who attempts to navigate the trials and tribulations of being a teenager, high school, her budding sexuality and complex familial relationships all while a mysterious superpower begins to show itself to her. The series is based on the Charles Forsman graphic novel of the same name, published in 2017.

Jonathan Entwistle is best known for his directing work on smash Netflix hit End of the F***ing World.

Interview: Daniel F. Holmes discusses his documentary about the Irish Homeless Street Leagues
"It’s not just some drug memoir. There’s so much else going on." - Rob Doyle discusses novel Threshold, drugs, politics and more
Roxane Gay and more react to Harvey Weinstein verdict
Yurt City returns for its second year this August
The Mary Wallopers announce headline gig at Whelan's
BBC to adapt Normal People author Sally Rooney's debut novel Conversations with Friends
We use cookies to ensure you get the best experience on our web site - by using this web site you consent to our use of cookies. Read more »