Junior Brother: "I’m more bold and difficult in my music than I am as a person"
Junior Brother. Copyright Miguel Ruiz.

Ronan Kealy, aka Junior Brother’s untamed voice and alt-folk music are anything but dull – yet it was boredom that initially led him to music.

“When I was nine, my parents finally let me go to guitar lessons,” he says. “I didn’t pick much up from them, because anything like school wouldn’t go in. When I stopped doing the lessons I started messing around with tunings, which was due to boredom. I suppose getting so into playing music was due to boredom as well.”

Kealy grew up in Kilcummin, a small village about four miles outside Killarney, Co. Kerry. There, he experienced a quintessentially rural Irish upbringing, with plenty of free time – and surrounded by the GAA.

“I didn’t really enjoy school to be honest,” he says. “I was extremely average in every way – very shy as well. I didn’t have many friends. There was no art or music in my secondary school, St. Brendan’s College in Killarney. It was very much a football factory. Páidí O’Shea went to my school and I think Pat Spillane, Colm Cooper and David Clifford.”

As a young lad with little interest in sport, Kealy turned to creating his own brand of music.

“I used to make these CDs when I was in secondary school, around third year,” he says. “I was sick a lot and staying home from school, so again, boredom. Alone on my own in the middle of the countryside with nowhere to go and nothing to do, I would record these albums that were very mad, very experimental, very lo-fi – but humorous as well.

“I used to burn copies of them when I went back to school and give them to people. At first people were like, ‘Ah class, yeah’, because people knew I played music. The other students would be like, ‘Unreal, look you did the artwork yourself, you’re great!’ Then they’d go home and come in the next day and give it back and be like, ‘What the fuck... what’s wrong with you boy? Next time you’re making one of them, maybe give it to someone else!’ (laughs).

“They were fairly unhinged recordings. They’re very different from what I’m doing now, but I’ve kept the madness of those old recordings.”

There’s a wildness and volatility in Kealy’s music that is in no way apparent in his demeanour. Sitting across from me in McNeills pub on Capel Street, Kealy strikes me as a very modest 29-year-old man, both calm and thoughtful.

“I’d have an edge in the music,” he says. “I’m more bold and difficult in my music than I am as a person. I think the way I am in real life is kind of shy and quiet – mild-mannered. It’s all saved and built up for when I express myself through music, so that’s why it comes out the way it does.”

While Junior Brother’s essence is rural Kerry, it took a move to Dublin to bolster his confidence as an artist.

“I had to make a jump, get to a place where I didn’t give a shit,” he reflects. “That’s when I got to really love performing. Before that, I didn’t enjoy it. I was always self-conscious about performing in front of people I knew. When I was in cover bands in Killarney, I didn’t feel a need to be at the front, I always wanted to be at the back.

“When I got more into the Junior Brother angle, and got more confident in what I was doing artistically, it snowballed into a confidence that I’d never really projected before. The not-giving-a-shit of moving to a new city and not knowing anyone was huge.” 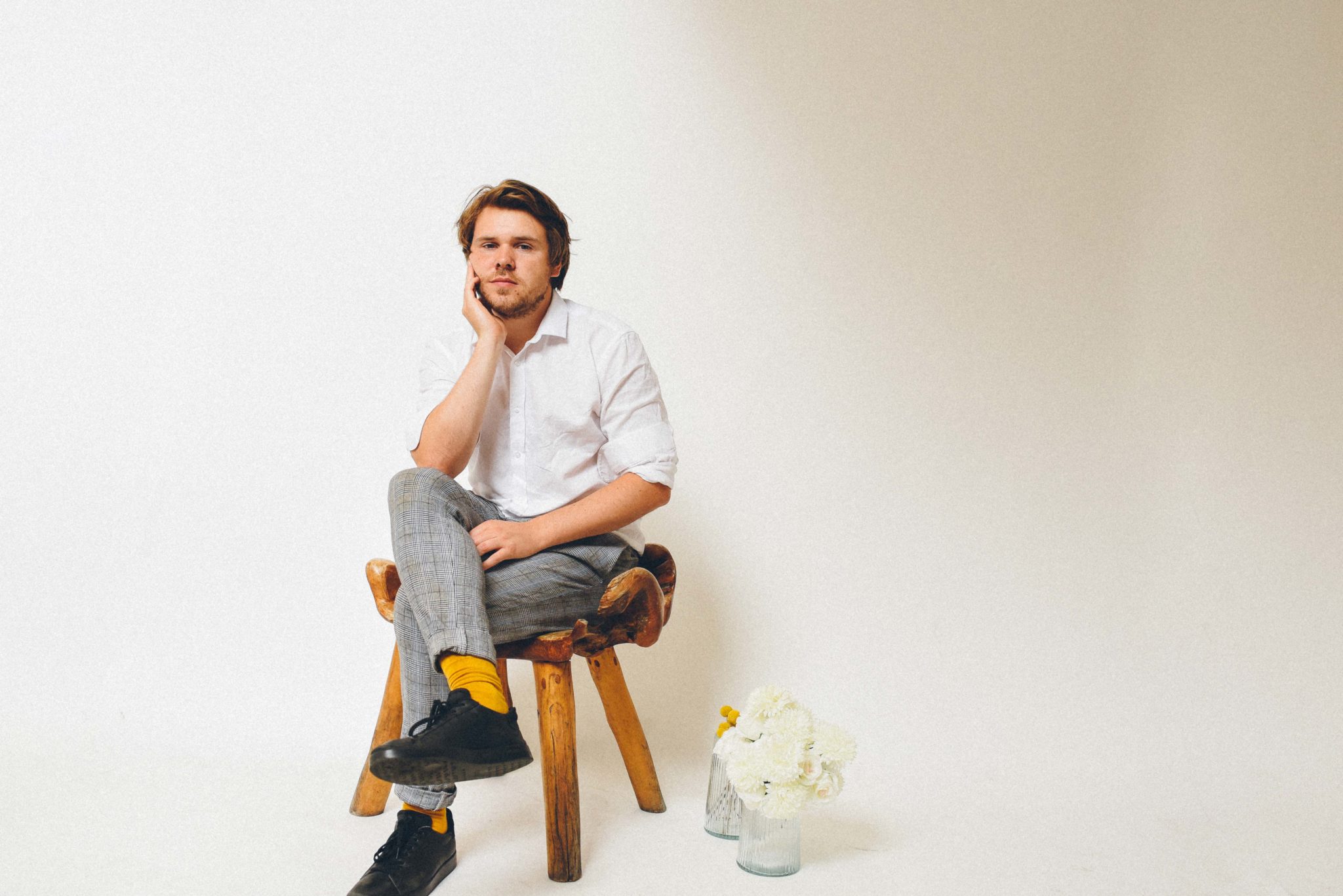 Dublin influenced Kealy from a young age, when his uncle encouraged him to check out Damien Dempsey’s music.

“I went into Roxy Records in Tralee and got the first album I saw, They Don’t Teach This Shit in School,” he recalls. “It changed my life. I didn’t know whether I absolutely hated it, was scared of it, or loved it. It was very confusing. It was very confrontational and that’s what I picked up from it when I listened to it. I’ve been trying to recreate that feeling ever since. It’s one of the best Irish albums ever made and one of the most distinctive.”

Growing up in rural Kerry, Kealy’s only experience of Dublin was attending All Ireland football finals as a child.

“I thought Dublin city was the area around Croke Park for years, like,” he laughs. “So when I heard the album, I had a lack of insight into the city. I was like, ‘What the fuck is going on?’ I couldn’t believe how ballsy it was – how weird and bare.”

Ballsy and bare are two words you could equally apply to the music Ronan Kealy creates. His distinctive mix of stark percussion and hypnotic acoustic guitar, alongside his frenetic vocals and strange stories, make for some mesmerising music. His influences are, unsurprisingly, eclectic.

“I fucking love Loudon Wainwright,” he enthuses. “He’s gas. For such a distinguished songwriter, he actually calls some of his songs novelty songs. I always called ‘Hungover At Mass’ a novelty song, and I wrote it as an exercise in writing a novelty song. But David Keenan told me to stop calling it that, so I’ve stopped calling it that.”

Referenced on the new album in ‘No Country For Young Men’, Wainwright’s classic ‘The Swimming Song’ is one of Kealy’s all-time favourite tracks.

“I was feeling really down at the time and that song got me through it,” he says.

The release of Kealy’s sophomore album has been a long time coming. It was filmmaker Myles O’Reilly, who originally approached Kealy about recording some music at Analogue Catalogue Studios, in Rathfriland, Co Down in autumn 2019.

“He was commissioned to do a film for them and he needed an artist at work to film,” explains Ronan. “So it meant a week’s recording for free, like! He told me it would be a good fit. I know Myles so I trust him. It felt right. I was looking around for a new experience in recording, something I hadn’t done before for the next album. I fell in love with it.”

The Great Irish Famine – recorded onto 2-inch tape – showcases Kealy’s unique storytelling style, as he explores themes of self-image, loss of innocence and religious oppression. Why give the album such a bold title?

“It’s lots to do with emptiness,” he says. “I suppose naming the album that was more of an emotional response, rather than a historical response. Obviously there’s a boldness to calling an album that, which I see as part of the attraction too. It’s that emptiness that pervades the album, and that juxtaposition that I tried to make with very huge sounds in the arrangement, and very bare sounds as well, conveying an emptiness.

“I’d like the listeners to come up with their own idea of what it is. There’s at least five or six very solid reasons why I chose it. If I think, ‘I can’t not use it’, then I’ll use it. The name sounds like what the album sounds like. I think I’d put my foot in it if I went any further, explaining!”

I ask how he thinks the famine has affected Irish people creatively. Has it been beneficial to our musicality and soulfulness?

“I don’t think so,” he says. “I think it’s been bad for that, it’s done the opposite. We were fairly rocking it before the Famine. It amazes me how we think so little of it as recent history. It’s so recent. How couldn’t it affect us?”

Junior Brother's approach to social and political issues in his music may be more subtle than his hero Damien Dempsey, but he doesn't shy away from them either.

“I like approaching things in a more abstract way,” he says. “In the new record that's creeping in more. When you move to a city like Dublin it’s hard not to be influenced by it and I definitely have been.”

Does Kealy think there will be a sea change in the next general election?

“It seems like there will, yeah,” he replies. “You can’t be young and not talk about politics now. Being in Dublin, I didn’t realise the echo chamber I was in until I went down home. I’d be like, ‘Yeah, Fianna Fail, Fine Gael, what are they at? It’s got to be Sinn Fein’. I remember my mother turned around and was like ‘Sinn Féin? No! What? No!’ It was like I told her I’d killed someone!

“My mom is fairly with it in her own sort of way, but she had this thing in her head of what Sinn Féin is. But it’s the nature of parties – they change when they’ve been around for a long time. I said, ‘Who would you vote for? ‘ and she said, ‘Oh, Fianna Fáil.' Their parents voted for them so obviously they’ll vote for them too.”

For better or for worse, this is often the case in Ireland. But small-town politics shouldn’t be sneered at.

“Down home you can’t say a bad word about the Healy-Raes,” notes Kealy wryly. “In fairness, Jackie Healy Ray had a house near where I grew up and the fuckin’ road was immaculate!

Kealy has no qualms either about discussing religion.

“Catholicism has affected people in such a way, that if you’re making music people see as Irish, it’s only natural that you bring that into it as well,” he says. “I’m interested in stuff that has lasted a long time before me, and probably will last a long time after. I find it grounds me. In the case of religion, Catholicism in my own case, it’s a thing of growing up being bombarded with religious imagery, and it being a part of my bank of symbolic imagery.”

There's plenty of that imagery to be found on the new album – as well, of course, as his 2016 breakthrough track, ‘Hungover At Mass.’

“That’s about Catholic guilt,” says Kealy. “I think that comes from a more recent resurgence of a new type of Christianity in this country. There’s a song on the new album called ‘King Jessup’s Nine Trials’. It was written as a direct response to the Tuam mother and baby homes report. It’s the most direct thing I’ve ever written.

“It was done as a stream-of-consciousness, but it ended up being an emotional cataloging of Catholicism. Starting from one human, to becoming something nobody can seem to control, which has affected so many people’s lives. For some very positively, because it’s their way into spirituality, but a lot of people very badly, and that particular example is beyond tragic.”

It’s clear there’s a hell of a lot more to Kealy and his music than supposed novelty songs. Junior Brother is a one-of-a-kind artist. His second album is a triumph – full of experimentation and reflection on the fallout of trauma both personal and universal. With his third album already in the pipeline, the prolific songwriter is only getting started.

“The tension of this album is very much a current tension I feel,” he says. “I’ve had a lot of joy and a lot of pain as well. It all fed into it – and I think it’s all there to be listened to.”

• The Great Irish Famine is available now via Strange Brew.