"It was the first time people shouted my name and clapped before I’d even done anything on stage:" Dani Larkin talks debut album success
Ellen Gough

It’s been been all systems go for emerging Irish folk star, Dani Larkin, since the release of her compelling debut, Notes For A Maiden Warrior. She talks prize nominations, hectic gigging, supporting Snow Patrol, and offering a platform to up-and-coming acts.

Things have been non-stop for Dani Larkin since the release of her stunning debut album Notes For A Maiden Warrior. Between several festival appearances all over the country, including Stendhal and the Clonakilty International Guitar Festival, organising her own tour, and squeezing in opening slots for the likes of Snow Patrol and Hothouse Flowers – not to mention her nomination for Best Album at this year’s Northern Ireland Music Prize – the Belfast folk singer has barely had time to process the release.

“It’s just been flat out gigging,” she explains over Zoom. “So it’s interesting to pick up the conversation again, to check in and see how things have gone. The day the announcement for the Northern Ireland Music Prize came out, I had just physically and emotionally – and on a soul level – caught up with the fact that I’ve released an album.

“Then an hour, after my agent Laura phoned me saying, ‘You made the shortlist!’ and I just cried. I think I cried for a good bit, because it all felt very big. The past couple of months have been filled with back-to-back gigs, and that just brings the album to a whole other level. It’s a whole other kind of conversation with people.

“It’s been amazing to have that sense of community, and then also to meet new audiences. For them to be enjoying the album is so powerful for me, and it’s been great to support the likes of Snow Patrol, and play with Hothouse Flowers and Saint Sister.”

Supporting Snow Patrol was another whirlwind – Larkin got the call mere days before opening for them at the hallowed London Palladium for two nights in September.

“They dropped us a line – I was chuffed!” she enthuses. “But it was the first weekend of touring folk festivals. I was down at Dunderry with Sofft Productions sharing a bill with Pillow Queens and Out of Algebra and Roe for two days, an incredible event. The news came in on the Friday that Snow Patrol wanted me to support them a week-and-a-half later in London! I was like, ‘Okay, cool. I’m not really sure how to deal with this information, but I suppose we should look at flights and see it’s possible.’

“It was my first gig in London, it was amazing. I have a great crew of people around me, and the Snow Patrol guys were very kind and really helped us out a lot. And you know, it’s the London Palladium, it was an incredible venue.

“It was also the first time for me stepping out onto a stage in a brand-new space where people shouted my name and clapped before I’d even done anything. I was singing songs written in my bedroom, which are so important to me and such important messages, and got to play them with my best friends in the London Palladium. To close it out singing ‘Three Wise Women’ in Irish was really incredible, and then to see Snow Patrol from the side of the stage doing their thing – it was just extraordinary.”

Things show no sign of easing either, as Larkin embarks on her first headline Irish and UK tour at the beginning of November. 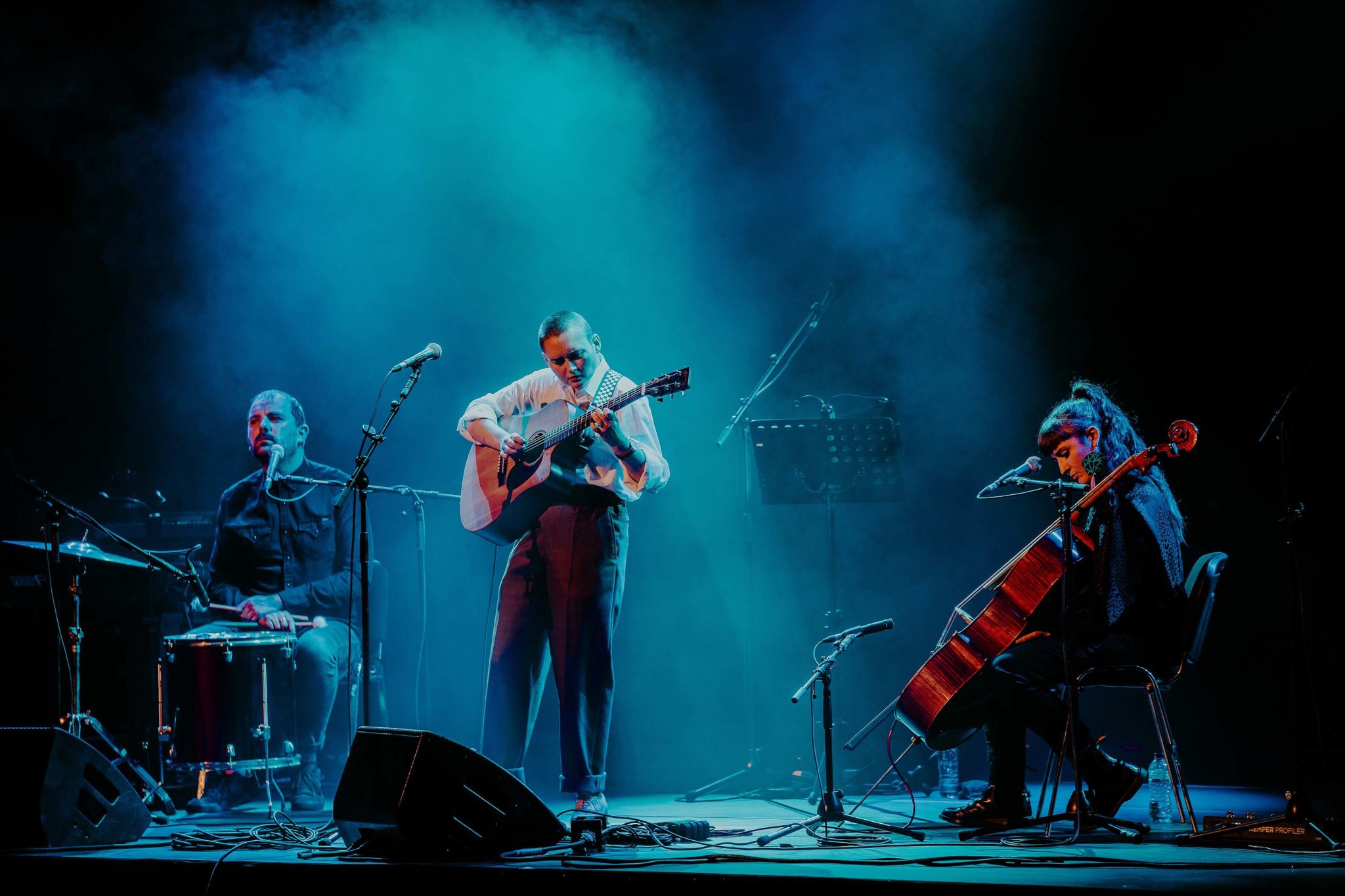 “It’s been lovely doing festivals and having that feeling, though it certainly took me a little while to get into it,” she reflects. “But after doing that run of 20 gigs or so, I feel really ready for the tour. I know, ‘Okay this is the amount of fitness that it takes, this is where I need to be at in terms of mental and emotional health.’

“It’s the full month of November and into December – it’s my first English tour as well. I’m playing right across England in Manchester, Newcastle, London and Brighton and I’m really looking forward to that. Then of course, I’ll be travelling about Ireland as well, and hoping to see some of the people I saw at the festivals. It’s the Notes For A Maiden Warrior tour, but there’s a couple of surprises in there as well, so I’m looking forward to sharing it with people.”

She’s also looking forward to sharing the stage with an eclectic mix of support acts, having put a call out on Twitter for local bands from each tour-stop – something she’s wanted to do for a long time.

“Over the past year, things have expanded in really big ways,” notes Larkin, “and I want to make sure I’m sharing that as much as possible with people. A lot of us can work very hard for very long, and feel we’re maybe not getting support slots that we want, or things we feel we should be. I’m just making that process a bit more transparent this time around. It’s me putting a post on social media saying, ‘If you’re from here, and particularly if you challenge or are not accepted by the white capitalist, heteronormative, able-bodied systems, drop us a line’.

“I’m still getting through all of the people who’ve messaged and I definitely won’t be able to reply to them all, but it’s been incredible to get to know lots of new music that way. Over the next couple of weeks, I’ll be getting in touch with people in those local spaces to share bills with. It makes me feel a bit more connected to community and place, because there’s nothing quite like showing up somewhere and meeting someone who can tell you the stories of the place.”

Things aren’t likely to let up for Larkin next year after her tour is over, as she’s recently announced the release of a live version of Notes For A Maiden Warrior for 2022, comprised of recordings from the album launch, which was livestreamed from the Ulster Folk Museum in June. The first single, ‘Bloodthirsty’, is quite chilling – perfectly apt for October.

“I feel a bit precious around it,” explains Larkin. “It’s a whole different sound from the album. I’ve never been a musician who feels that, when we’re playing live or releasing things, it has to be exactly the same as the studio album. I’ve always wanted it to be a bit different. You can go and listen to the studio album and that serves its purpose; sitting in your room or in the car or whatever. But whenever you show up to a gig, there’s a bit more excitement.

“I didn’t release ‘Bloodthirsty’ before and people seem to love it, so I thought, I really want to release this. And autumn is folk season for me; it’s the time we get our geansaís and thicker socks on, and light the fire – and for me that’s ‘Bloodthirsty’.”

The single comes with a gorgeous animated video, created by Belfast-based animator, illustrator and designer Andrea Shine, who Larkin connected with first at a folklore event. The two grew up only two towns over from each other, but had never met before.

“I’ve wanted to work with an animator for many years since I first saw The Secret Of Kells when it came out,” Larkin explains delightedly. “Andrea has really brought the ‘Bloodthirsty’ story of hunted and hunter to life in ways that bring the song into a whole other realm.

“This has been in the works for over a year. The Notes For A Maiden Warrior studio album is one thing, but the live album is another, and here’s a snippet of that; a different story in the same vein. It’s all systems go, to be honest.”

It seems Larkin is well suited to such a busy life – she’s still holding down a full-time job on top of her music career. Although some days are “more a crying tired woman than a warrior woman”, she extends a lot of credit to her agent, Laura McCabe from Jawdropper, and also, the massive whiteboard that’s apparently just off camera.

“Love me a good whiteboard,” she laughs. “It’s just necessary, but between myself and Laura we’re pretty focused, pretty driven. I love being a musician but also being organised.”

• Notes For A Maiden Warrior is out now.