We Happy Few: Xbox One (Compulsion Games)
By: Pavel Barter

As a premise, We Happy Few is a mind trip. The game is set in an alternate 1964 where the inhabitants of a fictional English town are zonked on a drug called Joy, in an effort to forget what they did to survive Nazi occupation. When the game opens, you play a newspaper censor who awakens from his Matrix-esque slumber and escapes to reunite with his missing brother. A further two playable characters feature in a story that riffs on Orwell's 1984, Huxley's Brave New World, and films such as Brazil.
As the back story unfolds in flashback, your goal is survival in a world gone bonkers. Hand-craft medicine and forage for food to stay alive. Stealth is a preferred option to assault, especially since the combat is clunkier than a sack of tin cans. Blend in with the locals; hide in grass to bypass villainous police officers.
The story and graphics are brilliantly unnerving, but Bioshock remains the daddy of dark dystopian videogames. 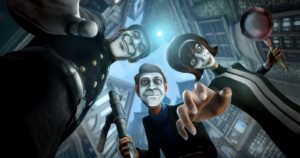 Web of Intrigue:Spider-Man PS4(Sony)
Shoots and Scores
All Back To Minecraft
On Our Radar Q+A: Kynsy talks performing and 'Happiness Isn't A Fixed State'
Hot Press Gift Guide: April and the Bear
Arab Strap announce first album in sixteen years
We use cookies to ensure you get the best experience on our web site - by using this web site you consent to our use of cookies. Read more »