Comedy community to come together for Stand Up to Hunger in aid of the humanitarian crisis in Yemen.
Ellen Gough

'Stand Up to Hunger' is taking place to raise urgently needed funds for the people of Yemen, who are facing the world’s worst humanitarian crisis, with 80% of the population in need of aid

The Irish stand up community is coming together this month for 'Stand Up to Hunger', a night of comedy in aid of the humanitarian crisis in Yemen.

The night will be hosted by the imitable Karl Spain (Republic of Telly, Karl Spain Wants a Wife), and will feature the talents of Tony Cantwell, Emma Doran (The Deirdre O’Kane Show), Barry Murphy (Apres Match), Julie Jay (The Tommy Tiernan Show), Fred Cooke (Dancing with the Stars), Liam Nugent (Peter McGann), Colum McDonnell (Savage Eye, Irish Pictorial Weekly) & Ed Sammon (Bridget and Eamon, Republic of Telly), in support of a most worthy cause which is shamefully getting lost to empathy fatigue.

Tickets are on sale now through Eventbrite. There will also be an online raffle through iDonate with some amazing prizes, including tickets to upcoming music and comedy shows for the likes of Mary Wallopers, Dara O’Brien, Foil, Arms & Hog and The Book of Mormon to name a few, and other prizes such as merch and signed records from Bitch Falcon and Ham Sandwich, and much much more. To buy tickets for the raffle go to iDonate.ie. 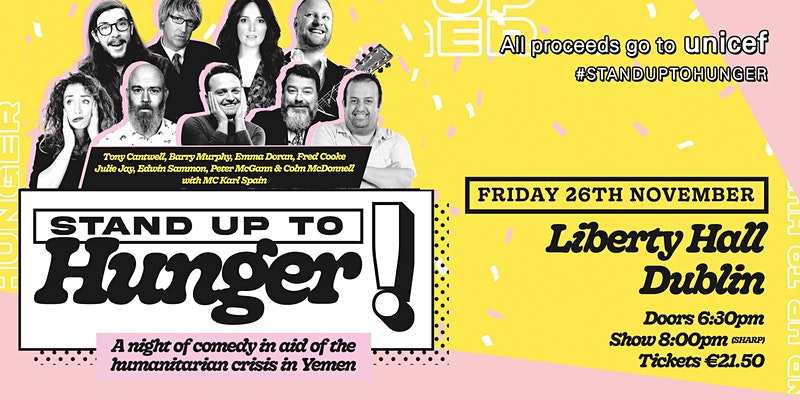 80% of the population in Yemen are in need of help, including 12 million children, as the country is in the grip of the world's worst humanitarian crisis. More than 2 million children are suffering from acute malnutrition and are in desperate need of lifesaving treatment. In addition to this, children and their families are facing outbreaks of cholera and other diseases, in the midst of the COVID-19 pandemic.

'Stand Up To Hunger' takes place on November 26th at 8pm in Liberty Hall, Dublin. Tickets are €23.80 including booking fee and are on sale now on Eventbrite.

“Traditional Irish melodies were a form of rebellion, which might be why the Irish love them,” Hermitage Green on their new beginning
VIDEO PREMIERE: Hermitage Green join forces with Canadian act The Trews on 'Ishmael & Maggie'
Just Mustard, Fears, Aoife Nessa Frances added to SXSW festival 2022 line-up