Countdown to Longitude 2022 - Becky Hill: "The first person of nine features who allowed me in the music video was Sigala"
Becky Hill.

I grabbed a few minutes with super-busy dance music star Becky Hill – who had just flown in from Dubai – after she performed at the finale of RTÉ’s Dancing With The Stars.

You may remember the 28-year-old Bewdley native from her slot on The Voice UK back in 2012. However, she first rose to wider fame with her entrancing vocal remix of Oliver Helden’s track ‘Gecko (Overdrive)’, which went straight to No.1 in 2014. Since then, Hill has been dubbed the “queen of dance music” in the UK, snagging the BRIT award this year for Best Dance Act.

Collaborations with the likes of David Guetta, Rudimental, Pete Tong, Tiesto, Little Simz and more further raised Hill’s profile, while she has also been recognised as a solo act in her own right, 2020 saw the release of her long-awaited debut album, Only Honest On The Weekend – as a result of which she is busier than ever. She’s about to jump on a plane to Barcelona to shoot a music video – but first she talks about her upcoming Irish dates.

“In terms of touring, I’ve got Longitude in July. I’m also coming back to Ireland for Indiependence in Cork. I’ve never been to Cork before, so it’ll be good fun," she laughs. "My boy took me to the capital for my 26th birthday. We went to the Guinness factory and Temple Bar.

“I’ve been here before to support The Script,” she adds “I did three nights in 3Arena with them – it’s a shame that tour got cut off. It was supposed to go all around the UK and Europe, so that was sad. I was on The Voice UK with Danny O’Donoghue, so I knew him from back in the day.”

Despite the fact that she started out at the age of 18, Hill has had a battle to have her abilities as a songwriter and producer recognised.

“The only person (I collaborated with) that allowed me in the music video was Sigala,” she tells me.

“He was the first out of nine features I’d done to do that. I had my profile raised once I was in ‘Wish You Well’. I tried to get in the ‘Lose Control’ video with Meduza, but was told ‘no’ multiple times.

“They said, ‘It isn’t that kind of video’. You’re not a part of the creative, essentially. I obviously sang on them and made the singles as successful as they are charts-wise, but it’s very hard to get the credit.

“I think it’s a woman thing,” she adds. “Especially in dance music. I’d say it’s very male-dominated, but that’s slowly changing now, which is incredible. I think it’s a vocalist thing as well. For example, the instrumental for ‘Overdrive’ was out 18 months prior to me putting my top line on it. When I did, it went to number one. That shows you how much power a vocal can have on a record. I hadn’t spoken to Oliver Heldens until about three months after the song had come out. I just got sent the track by my A&R at the label and MNEK, and two weeks after I sang on it, the track went to the top of the charts. It was a quick turnaround overall," Becky smiles. 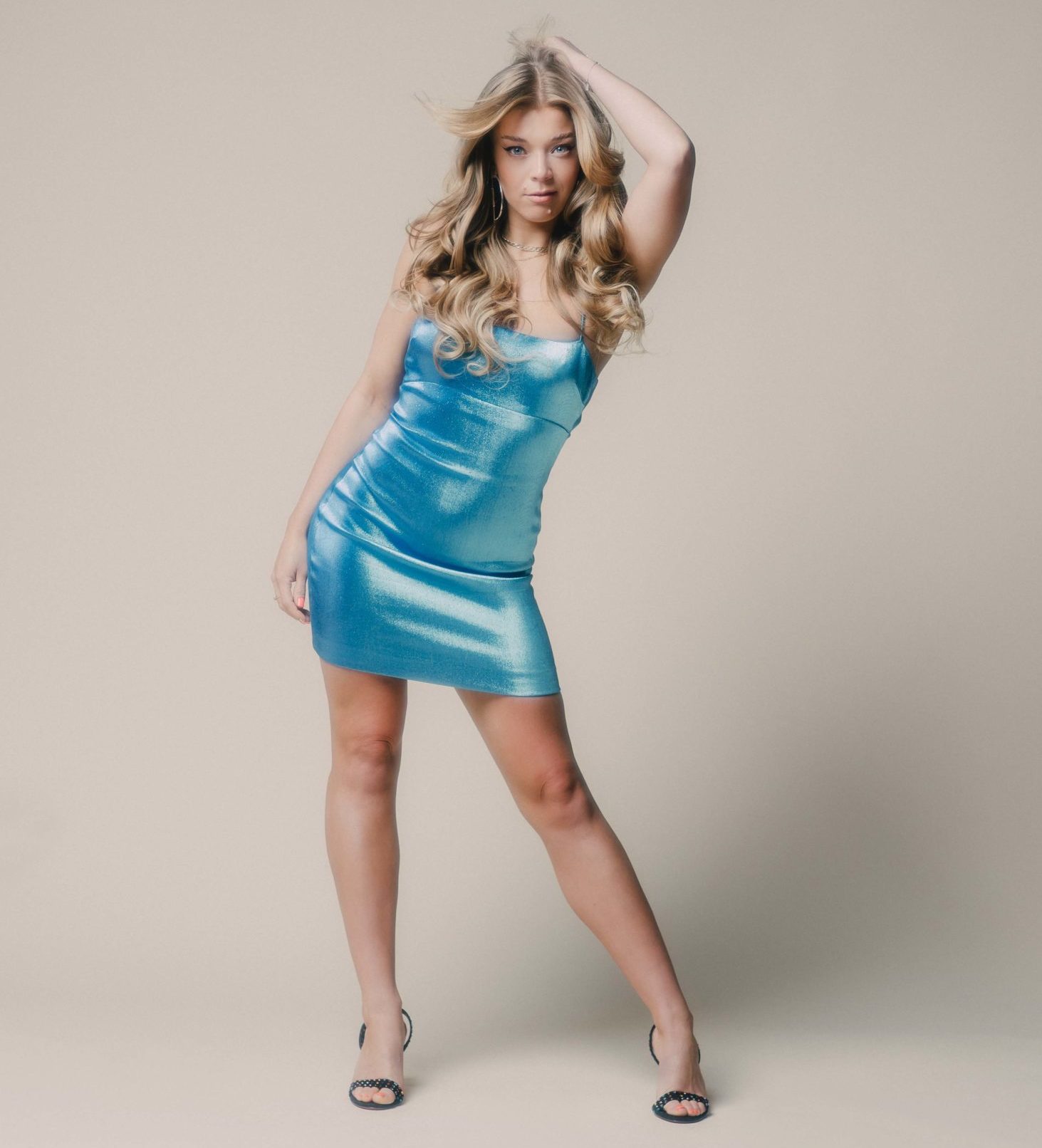 Now engaged to long-term partner Charlie Gardner, the pair are excited about potentially DJing together when Becky’s Ibiza residency kicks off this year.

“I’m hopefully starting season two of my podcast, The Art Of Rave, very soon,” she grins. “My fiancé is going to be involved in that as well. It was an idea that was cooked up between the two of us. He remembers a lot of the era that I’m asking these producers about, so it’ll be lovely having a third party there. I can’t wait to interview more people and find out about a time that I missed out on. I would have loved to have been a part of those years. I can’t wait to start that series again.

“I still am totally buzzed about the Ibiza residency, and being able to curate my own event. It’s not just Becky Hill’s pool party, it’s called ‘You Me Us’, which is taken from a lyric that was in my song ‘I Could Get Used To This’. It feels like we’ve created a new brand, as well as throwing these parties in the home of great dance music. It should be fun. It’d be good to start bringing him along on my tour dates and to DJ together. We both did the Dubai World Cup, which was really incredible. I’m going to try and get him on as much as possible. That’s the dream, isn’t it? Getting to tour with the people you love the most.”

In the meantime, there’s Longitude. Flying the flag for women at the event, Becky Hill should be well worth seeing...

• David Guetta, Ella Henderson and Becky Hill’s new single ‘Crazy What Love Can Do’ is out now. Catch her live at Longitude on Sunday.

Read the full guide to Longitude in our new issue:

Paul Mescal and Phoebe Bridgers set to buy a home together in West Cork
WATCH: Trailer released for new Irish thriller God's Creatures, starring Paul Mescal
Dean Art Studio offers workspaces to 20 multidisciplinary artists
The Academy apologises to actress Sacheen Littlefeather 50 years after Oscars speech
The Year Of Living Dangerously: "Is there any sensible way back from the brink?"
Album Review: Orbital, 30 Something