The second instalment of Pride Beyond The Pale takes us to Kilkenny. Not unlike our previous destination of Kerry, it is another fiercely GAA-centric county, with a strong appeal to tourists. I sat down with some cats to get their opinions on what it’s like to be queer in Kilkenny...

“It was very good. Well, I say very good, but I wasn’t out as a kid. I didn’t come out until I was seventeen and, even then, I think I was the only person in school that was out, certainly that I know of anyway.”

I’m sitting in Cleere’s, a bar and theatre space on High Street, just down from Kilkenny Castle, in the centre of Kikenny city. The place oozes artsy charm; there’s exposed walls, old posters from past events – and legendary pub food. I’m talking to Alan (pictured above, on the left, with An Taoiseach, Leo Varadkar, centre), an ex-member of the organising committee for Pride in Kilkenny – until they couldn’t get the numbers in 2016. “But yeah I never really had an issue in Kilkenny, it’s quite a nice place to grow up. People are very accepting,” he adds.

And yet, Kilkenny is difficult to pin down. Home to a nationally recognised arts scene, it was the first place in Ireland to fly a pride flag over the town hall – but also the county where a brother of the Capuchin Friars recently compared gay people, pro-choice people and advocates of contraceptives alike to zombies: “Physically alive but spiritually dead, morally rotten or at least infected,” he said.
So, I really wasn’t sure what to expect from the marble city.

The arts, it turns out, have a big role to play. “Actually it was during the Cat Laughs festival that I came out,” recalls Alan. “There was a gay comedian and I was a volunteer. One day I went up to him and said 'I have something to say to you - I’m gay'. He was openly gay and he was doing his act all week and he said, 'I know, don’t worry about it'. We were working together and I just felt this was a safe, comfortable place to come out. So that’s when I came out.” 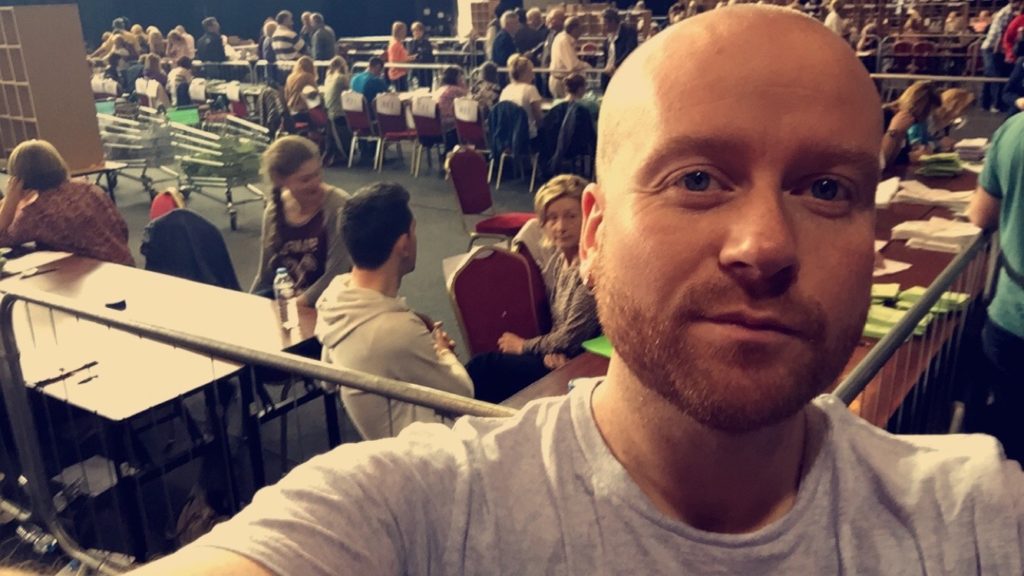 Alan at the Marriage Equality count centre in Kilkenny

Having said that, Kilkenny isn’t always the open, safe space Alan that found.

Seán (not his real name), a fellow cat, was born and raised in Kilkenny but is now studying in college, elsewhere. “I’m not openly gay,” he tells me. "I don’t feel the need in having to tell people I’m gay. Straight people don’t have to come out – so I don’t see why I have to.”
Fair enough: in an 'everyone knows everyone’ kind of town like Kilkenny it’s easy to see why some individuals might not want to “come out”.

One fear is that you suddenly you become tokenised as “the gay guy”. I asked Sean about his experience growing up.

“Growing up in Kilkenny wasn’t a great experience,” he says. "From first to third year in secondary school, I was bullied by groups of older lads, mainly hurlers. It was mostly just hearing ‘faggot' or 'you’re gay' when I walked past in the hallways. I remember having to avoid places where those lads would hang out, in order not to have abuse shouted at me, have food or rubbish thrown at me or be pushed around.

"I felt very uncomfortable in school and suffered from depression and anxiety because of it. I didn’t accept the fact that I was gay until third year – I just thought it was a phase or I just liked how lads looked, I was still going off with girls and going out with them at this point. In fact, I still don’t feel fully confident or comfortable in my sexuality due to all the bullying in school.

"After some of the older lads left school, the whole dynamic of the school hallways and lunch changed. I could move freely around the school, the lads who bullied me stopped after the older lads left. It seemed like no one cared anymore, although you could still tell they were saying stuff in their group – which I didn’t mind as such because at least I didn’t have to hear it.”

Seán’s experience was galling, but it was interesting how two young men could have such different experiences in a town so relatively small.

PRAYERS IN THE HOUSE

Chastened by my conversation with Alan, I leave Cleere’s and scour High Street for Pride flags or any kind of allusion to queerness. I come across a Carroll’s. Yes, Carroll’s: those gaudy tourist shops designed for Americans that most Irish people generally wouldn’t cross the threshold of. Lo and behold they had a Pride display, in their front window. I barrelled in with the enthusiasm of a yank looking for a 'Kiss Me I’m Irish' t-shirt.

I meet Stiofán and Lyndsey, both openly gay non-Kilkenny natives, from Dublin and Tipperary respectively. I ask them what moving to Kilkenny was like, and did they feel welcome as gay people? 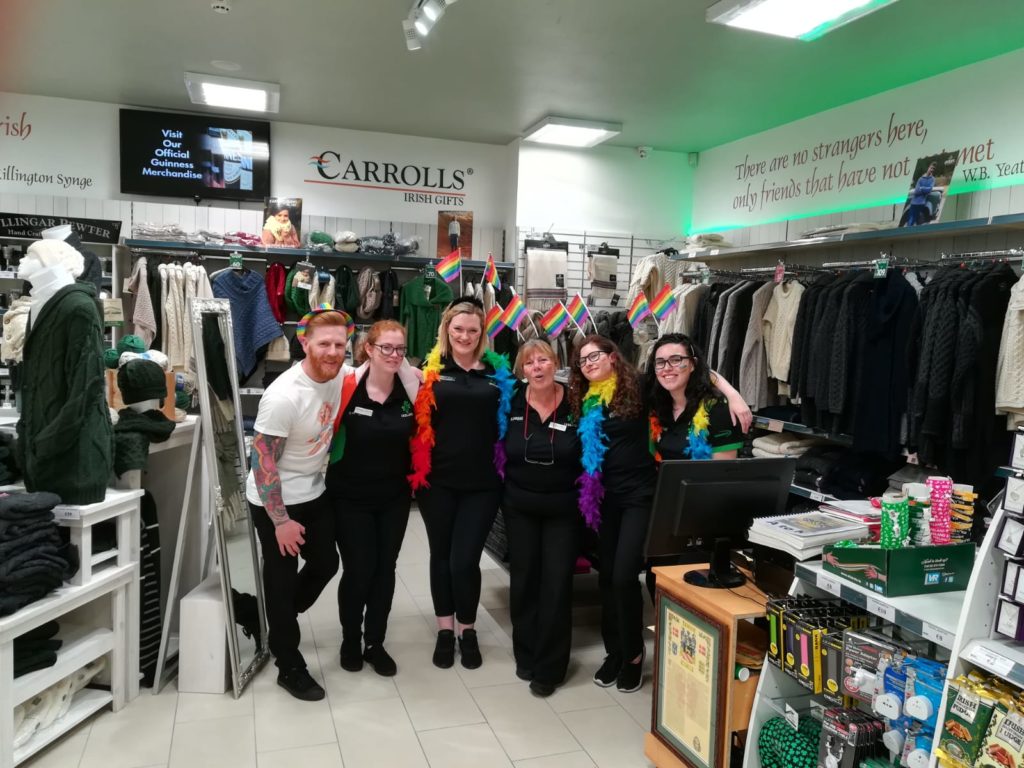 “I think with the younger folk you can see it a bit more,” Stiofán adds. "The younger people are more accepting of it. But Kilkenny has more of an older generation so they come from a time where you know...”

“We got a few comments last year when we had the Pride event in the shop.”

“Yeah we got a few nasty comments. It wasn’t very nice. That was from people in their late thirties early forties. What the priest said recently kind of highlights this.”

Does what a rogue cleric says in a sermon reflect the feelings of the people of Kilkenny?

“It does yeah,” says Stiofán, “but you see a lot of people now would have someone in their family who would be gay. They’d have a brother or sister or cousin – some relation – that is gay. I think it’s easier now to be gay than it was when we were growing up”.

Seán paints another picture, “There isn’t really a gay scene in Kilkenny, so many people aren’t used to it. With a county full of lads mad into hurling, and farmers, many people feel like they wouldn’t be accepted.

“I could only name a handful of people I know of my age that are openly gay in Kilkenny. I’d struggle to get to 5. The night scene in Kilkenny is basically all straight people. I’ve never once seen or heard of lads going off with each other in Kilkenny. I think because of the lack of a gay scene many people don’t want to come out until college or even later, due to the unknown consequences if they do come out.”

“Having to suppress my sexuality, watching friends getting in relationships and going off with people they actually fancied, felt pretty awful knowing I couldn’t.”

What was it like coming out for Stiofán and Lyndsey? “For me it wasn’t easy,” says Stiofán “I have five brothers. I also have a sister. It wasn’t easy coming from such a masculine family. But it was actually quite easy when I did come out. I thought it was going to be worse. It turned out well, a lot of my brothers were very supportive.

"My mother was so religious, unbelievable. When I told her I was gay, it took her probably a day or two to accept it. She used to have people over doing prayers in the house. So she said to them after I came out 'what do you think of homosexual people?' and they were like 'Oh it’s a sin’ – and she opened up the door and said ‘Please leave my house and never come back'.” Fairplay to Stiofán’s mam, what a legend!

“For me it was grand ,” Lyndsey says laughing, "my daddy was gay."

“He beat you to it,” jokes Stiofán.

“I brought home a girlfriend one day and it was like: grand! Coming out was definitely harder for him – he had four kids.”

So are there a lot of gay people in Kilkenny?

When I asked Seán how to date if you’re LGBT+ in Kilkenny, it’s a different, rather sadder, story.

“I actually haven’t dated anyone in Kilkenny,” he says. "There’s no one to date. Everyone’s still in the closet or unheard of. Even on nights out, you couldn’t go off with a lad – there isn’t a chance to because you don’t know who’s gay or bisexual. I downloaded Grindr a few times, but just kept deleting it because lads just wanted nudes and couldn’t carry a conversation. Most people wouldn’t even tell you their name or send a face pic if you were both from Kilkenny, because of the fear of knowing one another.”

“In 2009 we had Kilkenny’s first attempt at a Gay Pride Festival. A group of people put on a day of events which was a bit of fun. Based on that day, we decided let’s do this properly so we got some funding from the county council and put on a weekend of events – which was a first for Kilkenny.

"There was a gay bar in Kilkenny around the time, called Dignity. That only lasted eighteen months. It ended up becoming a stag and hen bar (laughs).”

Kilkenny ran a Pride parade until 2015, but couldn’t sustain it, due to lack of numbers and the personal commitment it requires of organisers. Alan is still keen to put something on:

“If anyone wants to run any LGBT events in Kilkenny I will happily promote them and get involved,” he says. "It’d be great to get more stuff happening in Kilkenny. Unfortunately I don’t have time to dedicate to fundraising and that kind of thing.”

Lyndsey and Stiofán are enthusiastic about the prospect too: “It would be good to see something happening in Kilkenny. We would love it! A gay night in some pub or even a Karoake night or something. We’d definitely be there. First in queue.”

• Carroll’s in Kilkenny will be hosting a pride event on the 29th, complete with gay anthems, rainbow lollipops and kitted out staff.

Roe V Wade: How can we productively channel our anger for the US into change for the North?
Free contraception for those aged 17-25 to be rolled out in August
THISISPOPBABY to premiere queer dance-theatre show Party Scene this summer
Pete Doherty tells Hot Press he's planning to apply for Irish citizenship
Government appears to have reneged on Micheál Martin's pledge that Citizens' Assembly on Drug Use will take place before end of 2022
The Drug Use In Higher Education Institutions (DUHEI) survey lifts the lid on illicit Irish student drug use