Ukraine: Putin And Those Who Support His Murderous Invasion Are The Real Nazis
Ukrainian flags wave in Dublin to support the people of Ukraine. Copyright Miguel Ruiz.

Since Russia, under the command of Vladimir Putin, launched its murderous and immoral invasion of Ukraine, horror has been mounted on horror. But we must not forget that this is just one war among many – and that there is an entire industry which fuels the senseless depravity of it all...

When he spoke to the joint houses of the Oireachtas last week, President Volodymyr Zelenskiy of Ukraine didn’t mince his words. He described utterly barbaric behaviour by the Russian army on the ground and in the air, at close quarters and from a distance.

People are being bound and executed, there are many mass graves, bodies have been dumped in the streets and flattened by tanks.

Monstrous and infernal munitions are being deployed. In the city of Mariupol, he said, bombing “continues 24/7” and “there is not a single house left intact in a city of half a million. None.”

Zelenskiy’s words were chilling. And the Russian army is indeed acting in a manner that is utterly barbaric.

But they are following orders. The biggest evil, and greatest existential threat to all of Europe, Ireland included, stems from Russia’s perverse and sociopathic ruling elite, a disgusting, murderous cabal of grotesques.

If you doubt this, read “What Should Russia Do with Ukraine?”

It’s an opinion piece by Russian film-maker – one of our kind, eh? – philosopher and political influencer Timofey Sergeytsev and was published just days ago on the website of RIA Novosti, a news outlet controlled by the Russian government.

You’ll find it online. And your blood really will freeze.

Sergeytsev states that “the special operation revealed that not only the political leadership in Ukraine is Nazi, but also the majority of the population” and that all Ukrainians who have taken up arms “Must be eliminated - because they are responsible for the genocide of the Russian people.”

This fucker thinks the Russians are the victims! (Or he pretends to).

He demands the liquidation of the Ukrainian political elite and its armed forces; forced labour, imprisonment and death sentences for all accomplices of the “Nazi regime”; and the creation of permanent de-nazification bodies.

He also says that “Ordinary Ukrainians must experience all the horrors of war and absorb the experience as a historical lesson and atonement for their guilt.”

He’s calling for genocide and the absolute suppression of the people of Ukraine. Which, of course, is exactly what Vladimir Putin set out to achieve.

Towards this morbid, grotesque, psychotic end, the Russians – or those in charge in Russia – have deployed their tank corps, ground troops and air force. They have shelled and bombed a huge tonnage of explosives and have deployed ruthless and utterly immoral and unethical mercenaries from Chechnya and Syria.

Cluster bombs, hyperbaric and hypersonic missiles, you name it, they’ve launched it. They’ve even threatened to use nuclear weapons.

That it hasn’t worked is extraordinary. The resistance by the Ukraine army and reserves has been heroic and inventive. 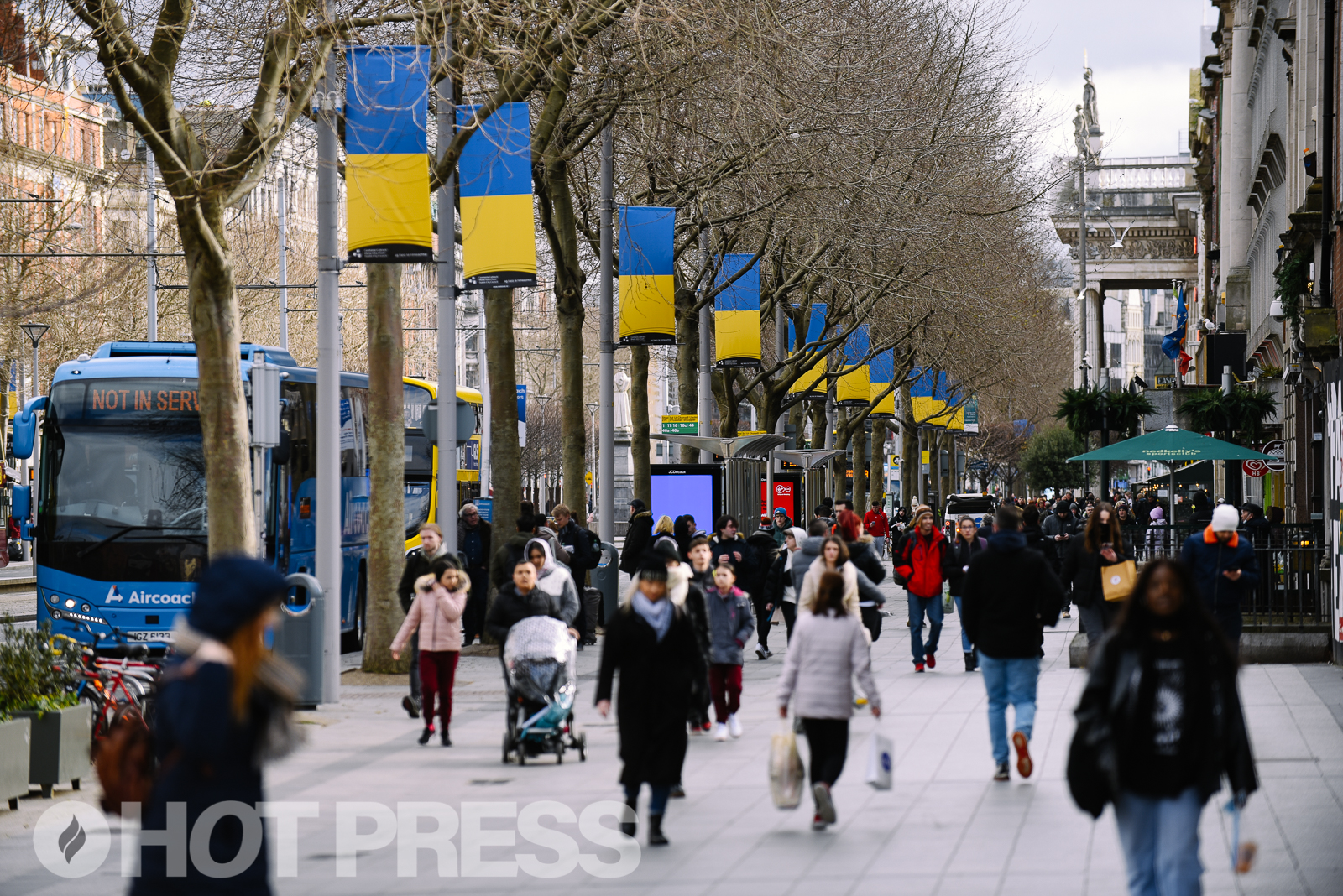 Their defiance is rooted in a genuine sense of identity, self-belief, and a moral compass that seems real. And the truth is that they need every support they can get.

Here in Ireland, we have opened our hearts to those seeking refuge and backed swingeing sanctions by Europe. There is more to come. We’ll have to dig deep into our national purse in due course.

This war will not end soon. Nor will either its course or its ending be simple. The forces on the dark side of this catastrophic eruption of evil intent are many and various and their methods are diverse.

As well as butchering unarmed civilians and bombing infrastructure such as hospitals, they have shelled and mined the fields and storehouses to mangle the world’s supplies of grain. It’s (yet another) low blow that is aimed to – and will – create havoc far beyond Eurasia.

Our empathy for the people of Ukraine and its leadership, and our engagement with those on the right side of this murderous conflict, is of a piece with our own history of invasion and colonisation. Instinctively, we side with a smaller country seeking to fight off the imperialism of a bigger and more powerful neighbour.

But also, it feels close. Over the past three decades, skilled workers from Eastern Europe have been ever-present in Ireland and not just from within the EU. We already had a significant number of people from Ukraine living and working here.

Perhaps that’s why our response has been so much more rapid and active than was the case when Iraq, and especially Syria, descended into the abyss a decade ago; and indeed why we are so much less aware of other murderous conflicts going on around the world.

But, even as we focus on the horrors of the invasion of Ukraine, let us not forget those other wars.

There are, according to the non-profit organisation IRIN (Integrated Regional Information Networks), more than 40 active conflicts around the world right now, including in the Yemen, Ethiopia, the Sahel region, Nigeria, Afghanistan, Lebanon, the Sudan, Syria, Haiti, Colombia, Palestine and Myanmar.

Some are very old. The conflict on the southern frontier of Sudan has raged for more than 60 years. There, approximately 2,000 died in 2021. But the cumulative fatalities since 2011 are close to 400,000. And every one of these conflict zones is in the middle of its own humanitarian crisis – or, more likely, disaster.

And we can’t forget the long-running drugs wars in Mexico where it’s estimated that at least 100,000 have died, in a different kind of ongoing societal blight.

The conflict in the Yemen, where approximately 30,000 died last year, is best understood as a proxy war between Saudi Arabia and their allies in the Gulf States, supporting the Hadi government; and Iran, supporting Houthi rebels.

According to the UN this conflict had caused over 377,000 deaths by the end of 2021, 60% of these as a result of hunger, lack of healthcare and unsafe water.

Both sides have committed war crimes.

Some were “double tap” attacks, in which the first strike hits a group of rebels and the second one hits the people who go to their rescue.

Writing for Al-Jazeera, Mohammed Haddad reports that oil-rich Saudi Arabia is the world’s largest arms importer and spent $57.5bn (8.4% of its GDP) on its military in 2020.

That makes the Saudis the main buyers of US, UK and Canadian-manufactured weapons. Between 2016 and 2020, nearly a quarter of the US’s, a third of the UK’s and half of Canada’s total arms exports went to Saudi Arabia. So all three countries – that’s right, including Canada – profit hugely from the fact that other people launch wars. And the bigger the war, the greater the profit.

That is, of course, true of Russia too. Putin’s mob are the second biggest exporter of weapons after the US, with almost 20% of the global trade.
All of these modern wars share three morbid characteristics.

• The first is their utter barbarity. These wars are waged by sociopathic monsters, who repeatedly demonstrate an absolute contempt for human life – including for the lives of their own soldiers, who are recklessly thrown into the firing line. The roll of dishonour is long. We don’t believe in an afterlife here on Hog Hill, but if we did we can guarantee that these dogs would roast in hell for an eternity.

• The second is the extraordinary ingenuity that has gone into the development and manufacture of the technologies of war. How many ways can we find of killing the largest number of people possible? How effectively can we spread the bloody impact? What poisons can we unleash? And how can we turn the streets or the countryside into killing fields even after we’ve left? Imagine what great things might be achieved if such exceptional creativity and productive endeavour were deployed against climate change or world hunger…

• The third is the ubiquity of the military-industrial complex. People have grown extremely rich making these machines of death and they have bought and sold politicians and policy makers across the world to do their bidding. They own the US Republican Party. How depraved must you be to profit from such distribution of death? Very depraved. And yet these people are treated as perfectly respectable business leaders and introduced with a smile...

And yet, worst of all is the inescapable fact that the existence of someone like Vladimir Putin, with his twisted ambition to brutalise everything and everyone around him into submission, and most specifically Ukraine and its people, confirms that it only takes one despot to create the need for an enormous defensive capability on the part of everyone. And there’s others out there like Putin.

It is nigh on sixty years since Bob Dylan penned the song ‘Masters Of War’. It is surely an anthem worth singing again, for these days of despair and defiance.

He ends it thus:

“And I hope that you die / And your death will come soon / I’ll follow your casket / By the pale afternoon / And I’ll watch while you’re lowered/ Down to your deathbed / And I’ll stand over your grave / ‘Til I’m sure that you’re dead.

Stark and bitter as that thought may be, watching the news these days, and thinking of the absolute depravity of what Vladimir Putin has unleashed, one can’t but say, where he is concerned: “Amen to that.”