The Ballad of Poor Claire Fox, Boris Johnson, the Revolutionary Communist Party and the House of Lords
Eamonn McCann

Claire Fox came to Derry in the early ‘90s as a member of the Revolutionary Communist Party, preaching support for the armed struggle. Now, she has been appointed to the so called House of Lords by the British Prime Minister. Plus: strange goings on in the Guildhall with John Hume...

I never figured Claire Fox for a Lady. But Boris Johnson took the opposite view and has elevated her to the House of Lords.

(I was thinking of complaining about the studied sexism of calling all members of the institution “lords.” But then I thought about it again and realised I couldn’t be bothered.)

Ms. Fox has followed a long and twisted road to plump down at last amid the velvety ambience of the “Upper House.” When I met her first, she was a leading member of the Revolutionary Communist Party. I knew the minute I set eyes on RCP-ers that they were well dodgy. Clean fingernails, glossy hair, that sort of thing.

Claire was among a clump of comrades who dallied in Derry for months in the early 1990s, attending discussions and demos in the Bogside and beyond, polite as you like as they engaged innocent Bogsiders in detailed discussion of how the community might slough off the congealed muck of British imperialism, patiently explaining that armed struggle was your only man. Anybody within range who dared diss the armed strugglers risked being denounced by Claire and the Comrades as quislings, backsliders, apostates.

Naturally enough, local supporters of the ‘Ra reckoned this crowd sound enough. But the amity only lasted until the IRA’s declaration of a ceasefire in July 1997. Claire and the Comrades went bat-shit crazy. The Irish people had been sold out again! History could never be vindicated until the stain of shame had been cleansed from the face of our nationhood. The ceasefire must be renounced, the war of liberation resumed!

Claire was so distressed by this misfortunate turn of events that she stormed along to the Blutcher Street home of one of Derry’s top Sinn Feiners, banged on the door and demanded an explanation. His response that she should – to use a technical term – fuck off, appeared to dampen Claire’s fervour. Shortly thereafter, she left town, possibly grinding her teeth at the crass ingratitude of those who’d abandoned the armed struggle which she had travelled so far to solidarise with.

As far as I know, she hasn’t been back. She was soon signed up by Nigel Farage and won a seat in the European Parliament. Now Fox is running with a different gang of Northerners – the Viscount Brookborough, the Viscount Craigavon, Lord Browne of Belmont, the Lord (Willie) Hay of Ballyore, the Lord Maginnis of Drumglass, the Lord Trimble of pocketing the mazooma which comes with the Nobel Prize even as his fellow laureate, John Hume, was dividing his share of the dosh between Vincent de Paul and Barnardos, and about a dozen others of equally exotic provenance.

She will possibly now entertain her colleagues in the Westminster tea-room with misty reminiscence of the grand days in Derry when she knew all the words of 'Take It Down From The Mast' and scarce unclenched her dainty fist from one weekend to another.

Strange the way things turn out.

Never trust anyone who announces themself as a revolutionary and uses hair-gel.

Mayor Noel McKenna at his dignified desk, with Pogues, Dubliners, Jimmy Ellis, John Hume and me, downing unfeasible quantities of whiskey in the Mayor’s Parlour in the Guildhall a lifetime ago (1997). 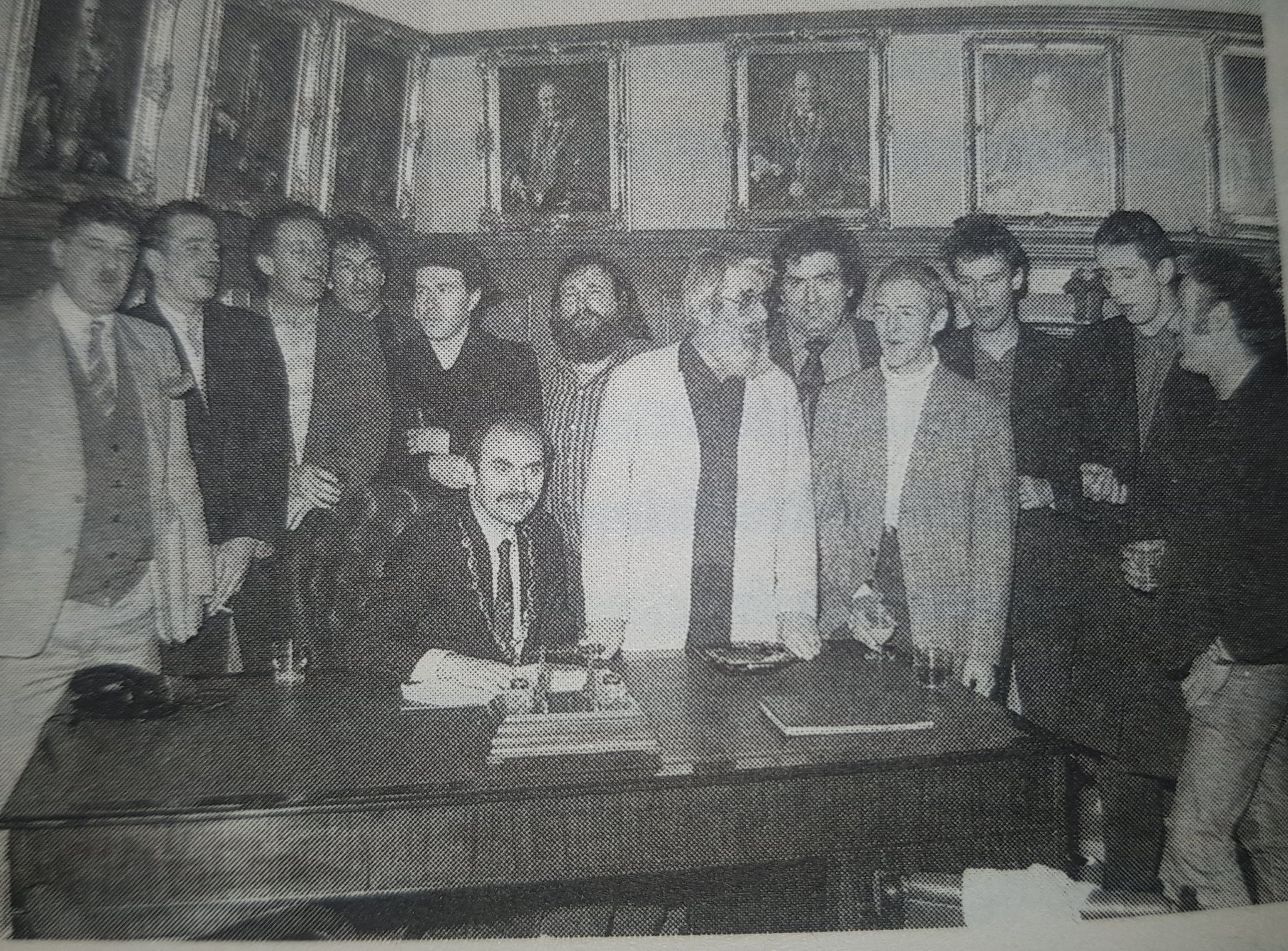 Mayor McKenna fled the scene after our classic rendition of 'The Auld Triangle', shouting over his shoulder that the booze we were guzzling had been bought by the rate-payers and we should all leave NOW. John overruled him, so we continued our carouse. Shane and Ronnie led the company in 'The Irish Rover'. John essayed 'My Lagan Love', myself on backing vocals. The rest is silenced.

The pandemic wiped out gigs here, there and everywhere. Will we ever stumble through a festival haze again? Or wilt on the third night and wonder why we hadn’t taken that lift home? Or close our eyes to sway in communion with the whole wide world and Bruce Springsteen? Or inch and elbow towards the front of a jam-packed pub so you don’t have to bounce up and down on your toes to catch a glimpse of the shenanigans on stage?

Who’s to know? Maybe we’ll all go together when we go.

In the meantime, there’s an efflorescence of homemade music all across the internet. The wonders of modern technology beckoning bands to broadcast from the garage or their mother’s front room.

Some sessions seem to attract only a couple of hundred in-the-know viewers.

But a couple of hundred could be huge. As at gigs you’d go to, long ago. A crowd of 20 or 40 or 50 howling appreciation of teenage crazies giving it loads.

Do-it-yourself music is back to the beginning, by way of the magic of modern technology.

It will develop in its own way, carve out its own space, take the road to god knows where.

The death-toll from the pandemic is too terrible to contemplate. But we live in a world jostling with contradiction. Music can make you feel young again, too.

Get it while you can, advised wise woman Janis Joplin. It may not be there tomorrow.