On this day in 1978: Thin Lizzy released Live and Dangerous
Roisin Dwyer

My 13-year-old world changed utterly and inexorably on hearing Thin Lizzy’s Live and Dangerous for the first time.

I borrowed the 12-inch gatefold double-album vinyl artefact in all its weighty glory from my brother-in-law, recorded it onto BASF 90-min tape and, from then on, it was destined to be played continuously on the family stereo or on my older sister’s battered Sony walkman.

A new world had opened up. What was happening to me? The music made me feel elated. Life had new meaning. I adored the riffs. Phil’s lyrics. Brian Downey’s thunderous but nuanced drums. The excitement that listening to the album generated defied description: I was transported to another state of being. I wanted to be part of THIS… whatever it was.

As quickly as I could, I saved up enough pocket money to buy my own precious objet d’art. Its leather-crotch-filled cover. Its inside sleeves with photos of the men who were responsible for the life-altering sound. There they were, resplendent with long hair, in red jumpsuits, with shining guitars, pulling outrageous poses – and, at the centre of it all, was a black Irishman!

Every hour brought a fresh grilling. I quickly became a pariah, a pest to be avoided unless you secretly wanted to be subjected to another tedious interrogation. I remember on one occasion being caught short and banging on the bathroom door to be greeted with a yell of "No, I don’t know what bleedin' shoe size Phil Lynott wore!” My brother was in the bath.

I devoured the information on the back cover. Who were these magical personae? And their cohorts with strange names like Bluesy Huey Lewis and Chalkie Davies? Rats and Radiators? It was my life’s mission to find out more. To know more. To be initiated.

Each of the four sides has a different mood. There is still no album opener as exciting as the crowd chant before ‘Jailbreak’ revs up and twangs into gear, followed by the raucous ‘Emerald’; the yearning melody of the glorious ‘Southbound’; and the rollercoaster ride of Lizzy’s adrenaline-soaked version of Bob Seger’s ode to the teen queen, ‘Rosalie’.

Side two brought the seductive sway of ‘Dancing In The Moonlight' and the aching sense of loss that fuels ‘Still In Love With You’ – the latter in particular showcasing Robbo and Scott’s contrasting six-string prowess.

Magnificent as Disc One is, however, it is when we hit side three of Live and Dangerous that things power majestically into full-on overdrive. It is perhaps the most perfect slice of live action in the history of rock ’n’ roll: opening with the extraordinary, resplendent double-whammy of ‘Cowboy Song’ and ‘The Boys Are Back In Town’, it blazes defiantly into one of Philo’s greatest songs, the mischievously confessional and teasingly revealing ‘Don’t Believe A Word’. The Hendrix-esque ‘Warriors’ spaces us out momentarily, before ‘Are You Ready?’ grabs us by the scruff of the neck and drags us back to the middle of the melee.

It is Brian Downey’s moment to shine on side four, with the percussive perfection of 'Sha-La-La’. Live and Dangerous is one of those rare things – a live album which makes you feel part of the experience of the gig itself. Phil intros the individual members of the band on ‘Baby Drives Me Crazy’, before the sound of the crowd baying for ‘The Rocker’ introduces the song that brings the most perfect live album EVER to its conclusion. Regardless of anything Tony Visconti might say! 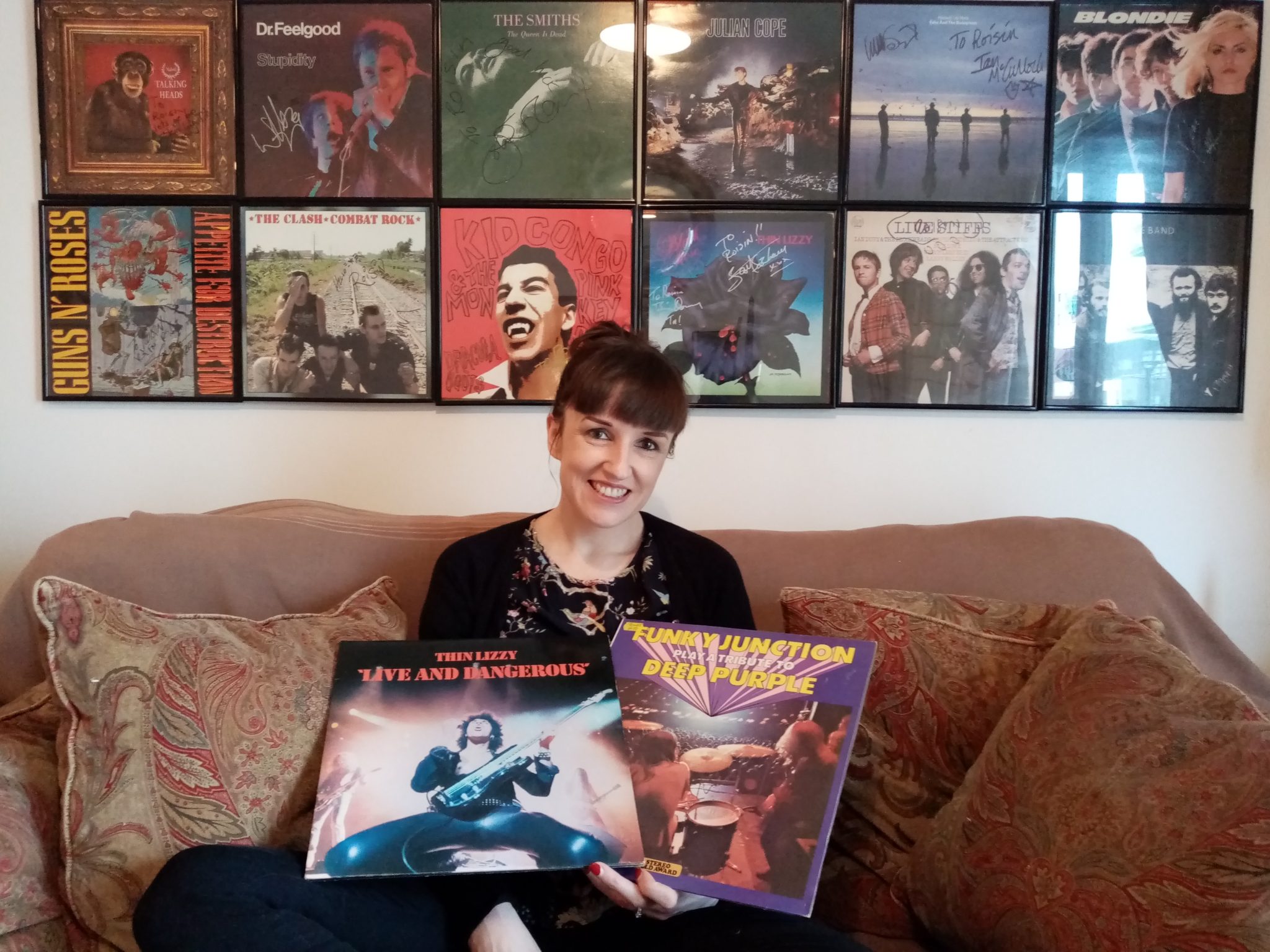 Roisin Dwyer, pictured with the sleeves of the vinyl versions of Thin Lizzy's Live and Dangerous and Funky Junction Play A Tribute to Deep Purple

The crucial thing, for me personally, about Live and Dangerous is that it gave me a true sense of belonging. Phil was warm and larger than life. He implored the crowd to ‘clap your hands for me’ and jokingly asked girls if they wanted ‘a little more Irish in them’. He introduced the band and guests like they were beloved kin… Who was John Earle anyway? Another question for a long-suffering family member.

I discovered that this was a tribe I could be part of – by buying albums, learning more and spreading the righteous word about their brilliance. Every Saturday, donning a Thin Lizzy t-shirt, I took my worse-for-wear Freebird Records bag full of Black Rose fanzines (essential reading material) to town on the bus. I always sat upstairs, my sellotaped-together walkman (long commandeered from my sister) blaring out the music from the Hammersmith Odeon or Seneca College to impress (or more likely infuriate) my fellow commuters. I didn’t care.

My quest for Lizzy and related material took me to the fabled Freebird, Abbey Mall, RPM, Borderline, George’s Street Arcade and inspired a first-ever visit to the palace of the legendary Mr. Murray, whose shop was one of the rare indoor establishments that stocked bootleg tapes. O’Connell Bridge and the north side of the Ha’ penny Bridge were essential pitstops for these coveted supplies also. Oh, the joyous days when a rare find took place. My disbelief at uncovering Funky Junction Play A Tribute To Deep Purple in RPM!

I had graduated to hardcore fan at this stage, no longer asking questions but, instead, boring people senseless with monologues instead.

Years later at my job interview in Hot Press, Niall Stokes would remark on my good fortune at hearing such a seminal album at a tender age. In the years that followed, Hot Press gave me the opportunity to meet and interview most of the former Lizzy members and to establish a working relationship of sorts with them across various projects over the years. Gentlemen all!

The late, great Frank Murray was a regular caller to the Hot Press office, and we enjoyed frequent friendly banter. I remember once someone telling me that he had said he 'liked my vibe’. Imagine what my 13-year-old self would have thought of all this!

It is a good moment, one suspects, as we batten down the hatches to avoid the potential ravages of Covid-19, to revisit the things that mattered most to us. And so it proves. Live and Dangerous remains as powerful and as potent as ever. Listening to it now is like sitting down with an old friend.

I am honoured to still be a member of Phil’s gang.

Rory Gallagher at Macroom: Revisiting his remarkable pre-festival interview
EP Review: Sophie May, You Do Not Have to Be Good
Book Review: John Connolly - The Furies