Let us first address the shades-wearing elephant in the room, Elijah Hewson looks, and moves, an awful lot like his Da. It’s there in the way he gazes open mouthed at the crowd, the way he raises his hand, and in the way he sings, or at least the way his auld lad used to sing before the War. Mind you, I look very like my father too, I probably move like him as well, and I’m guessing U take after your father 2. It’s hardly a crime, let’s get past it.

I was very much in the cynical camp when I first heard tell of Inhaler, and the lineage from which their lead singer sprang, although I’ve never subscribed to the idea that you have to grow up in a hedge, being constantly beaten with a hurl and fed scraps in order to produce decent art . Their first single, the frankly flat-as-a-pancake Stone Roses outtake ‘I Want You’, didn’t help matters, and when you heard it on the radio, ahead of perhaps more deserving local acts, you couldn’t help but snort. They don’t play it tonight, perhaps they’ve already, wisely, consigned it to the bin. Seeing them at a recent awards do meant I had to eat my words somewhat, as they were pretty bloody good, certainly a lot better than the hissing gaggle of cynics, myself included, would have expected. Accordingly, there’s a decent sized crowd in when they take the Academy Green Room stage as support and Hewson greets us with a “Good evening, We’re Inhaler”.

Apart from Hewson’s nascent star appeal, the man to watch here is guitar player Josh Jenkinson who stomps on his pedal board like it owes him last month’s rent, gives it a judicious bit of slide and proves imaginative throughout. The songs get better as they go on too. They might want to stay away from the “woah, woah, yeah, yeah” choruses which will only invite further comparison with the pater familias, but by the time they get to the one with the ”easy as an ice cream sundae” chorus – proper backing vocals too - you start to think this lot might have something. Second single ‘It Won’t Always Be Like This’ is a better bet than the first one altogether, a mix of The Killers and a bit of Joy Division filtered through Interpol (with, yeah, a dash of The ‘2), and it sounds good here. Let’s not get carried away, they’ve still got plenty of work to do, but they’re coming on in leaps and bounds. They also had a fair sized group of young women gazing at Hewson’s face and singing along, which is always a good sign. And if other bands tell you they aren’t interested in that, they’re talking through their arse. 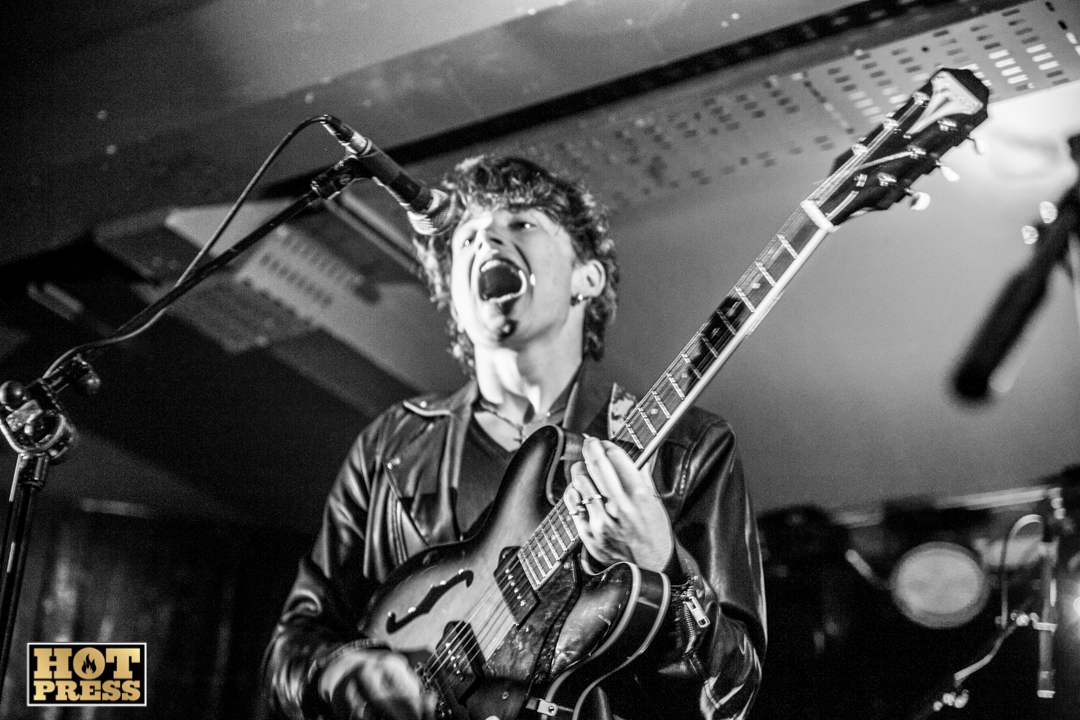 Inhaler at the Academy, ©Danni Fro

One presumes that in Derry they teach you about The Undertones in school, as well they should. TOUTS have certainly learnt those lessons – sharp as a blade catchy punk songs that don’t outstay their welcome. They walk on stage to the strains of Dead Kennedys’ ‘Holiday In Cambodia’ so you know it’s going to be more a case of ‘Jimmy Jimmy’ than ‘Danny Boy’ (a tenuous link I know, but it’s based on the “London”Derry Air, so allow me to shoehorn it in).

“Overworked And Underpaid’ and a song that might be called ‘Chicken Fried Rice’ - which shares a bit of DNA with Stiff Little Finger’s ‘Suspect Device’ - kick things off like a load of Millwall fans coming through a barricade. Matthew Crossan, looking good in a cracking pair of brothel creepers, howls out the ‘Rice’ chorus – “Too much shite on the radio!” – while he clangs away on the Gibson SG he probably half-inched out of Paul Weller’s studio, Luke McLaughlin’s hopping up and down dragging a possibly reluctant bass guitar, which is probably wondering what it ever did to him, along for the ride, and Jason Feenan is already beating the living tar out of the kit.

Look at Feenan. He’s wearing a football kit, shorts and all, and he’s grown his hair out to a ridiculous extreme for a punk band. Are those lamb chops on his face?!? Imagine Carlos Valderrama and the cowardly lion from The Wizard Of Oz decided to have a child together and you might be close. Instead of asking for courage, this offspring from the love that should not speak its name just wanted to hit things, hard. He got his wish. He attacks the drums like a Spartan in a coastal pass.  He appears to be trying to burrow through them to get to the floor during ‘Asleep’ as the chorus riff goes up and down a semitone before McLaughlin finishes it out with a descending bass run. They’re lethal bastards, taking no prisoners, an we’re only three songs in.

Are TOUTS happy with the status quo? With the way things are? Are they balls! ‘Pretentious Revolutionist’ finishes with the refrain “It’s all a load of shite!”, and “Go Fuck Yourself’ – the clue’s in the title – advises all and sundry to go fuck themselves. It’s dedicated to all the keyboard warriors. If this lot ever took any shit, it was most likely a long, long time ago. The song breaks down to just the guitar riff before they all pile back in like a double decker going off a bridge.

‘Before We Go Forward’ was a demo that the late, great Joe Strummer recorded with Paul Simonon back in 1983 which recently showed up on a bonus seven inch included in the excellent Joe Strummer 101 boxset. Touts recorded it in aid of the Joe Strummer Foundation, claiming it was the tune that got them first but it was the lyrics that sealed it. “Before we got forward, we find the Achilles heel, which is money, the only thing they feel” could, as the band have pointed out, been written with Brexit in mind. I’ve interviewed the band in the past, and to say they feel passionate about this issue is the very definition of understatement. Touts succeed in recapturing some of The Clash’s monumental energy and putting it back in its rightful position behind St. Joe’s words. “Are you too hip to care?” No, I’m most assuredly not. You are strongly advised to seek this recording out.

Where do you go after that? ‘Cease And Resist”, an ode to dodgy cider in ‘Frosty Cack’, more Clash-isms in ‘I’m Losing It’, and McLaughlin demanding movement from the crowd who “look like they’re at a funeral!”. The accents are something else, like trying to decipher what someone is saying through two wet duffle coats, and I know people from Cork. “Wee buns” it isn’t. The band make light of this, Crossan joking about it. “How’s the accents tonight? Rur, raj, wuzz, wuzz, howsaboutye, etc”, or at least I think that’s what he said, ‘cause he makes the cast of Derry Girls sound like their auditioning for Downtown Abbey. Let’s take the chorus of the pile driving ‘Micky’ as an example. Is Crossan singing “Micky’s Handsome”, “Micky’s Had Some”, or “Micky’s arsehole”? It doesn’t matter of course, by the time it gets to the “dirty stinking tout!” middle bit,  you’re past caring and busy roaring it out alongside him. During the feedback of ‘No Name’ Crossan, now on his more familiar Telecaster, and McLaughlin meet in the middle of the stage to pound out the riff, the head of Crossan’s guitar touches the floor, it’s a great image, iconic even, and I curse myself for not getting the camera out quick enough.

Now that they’ve got the “new shite” – a statement that’s only half right – out of the way, it’s a run to the finish with the more familiar, and by familiar I mean some of the best Irish singles of the last few years. ‘Can’t Blame Me’, ‘Sold Out’ and a positively exfoliating ‘Bombscare’ have the younger element pogoing and bouncing off each other and the more mature amongst us glowing. It’s a bit like that immortal scene in the Good Vibrations movie where Terri Hooley beams at the stage, experiencing a moment of clarity, swept along by the power of what he’s hearing and seeing.  I put the notebook in my pocket and stand in front of the vibrating speakers, probably dislodging earwax that’s been there since the late nineties. Is that blood coming out of me lug? No matter. It’s a small price to pay for this kind of aural kicking. TOUTS are peddling the kind of maximum rock n’ roll we all need a lot more of.