Live Report: CMAT celebrates her debut #1 with a soaring performance at The Academy
CMAT at The Academy. Copyright Grace McNamara /hotpress.com

Upon walking into The Academy last friday night, it looked a little less like Dublin and little more akin to the crowds found two-stepping across Nashville's honky-tonks. Everywhere you looked there were fringed hats, leather boots, cow print and bolo ties – save spurs and chaps, it was the whole get-up.

Who could have inspired such a thing? Why, only the #1 artist in Ireland, country-pop singer CMAT.

After releasing her soaring debut earlier this month, If My Wife New I'd Be Dead, CMAT announced she was due back home in Dublin to great anticipation – as made evident by the wall to wall fans that packed the venue ahead of her performance. In a serendipitous turn of events, news came down the morning of the gig that the debut had indeed scraped the #1 spot in the country. The defiantly comedic yet vulnerable LP beat out the likes of Olivia Rodrigo, Ed Sheeran, Dave and Dermot Kennedy.

With a new landmark reached for the Meath native, the purr of excitement across the venue rose to new heights.

While fans waited for the singer to step on stage in her ubiquitous Dolly-inspired western wear, a similarly unique outfit opened the night. Self-deemed as "not really a band," Soft Launch consists of multi-instrumentalists Josh McClorey and Henry Pearce – also featured players in CMAT's backing band. The group offers a wide range of appeals. Beginning with an acoustic offering about Catholic guilt, before transitioning into a cover of 'Southern Nights', before once again changing the pace with a wiry synth-led number, you never knew what to expect next from this duo. Grounding all of the excitement, was a genuine prowess. McClorey expertly picked his way through lead guitar lines while Pearce effortlessly sounded off on an array of instruments. 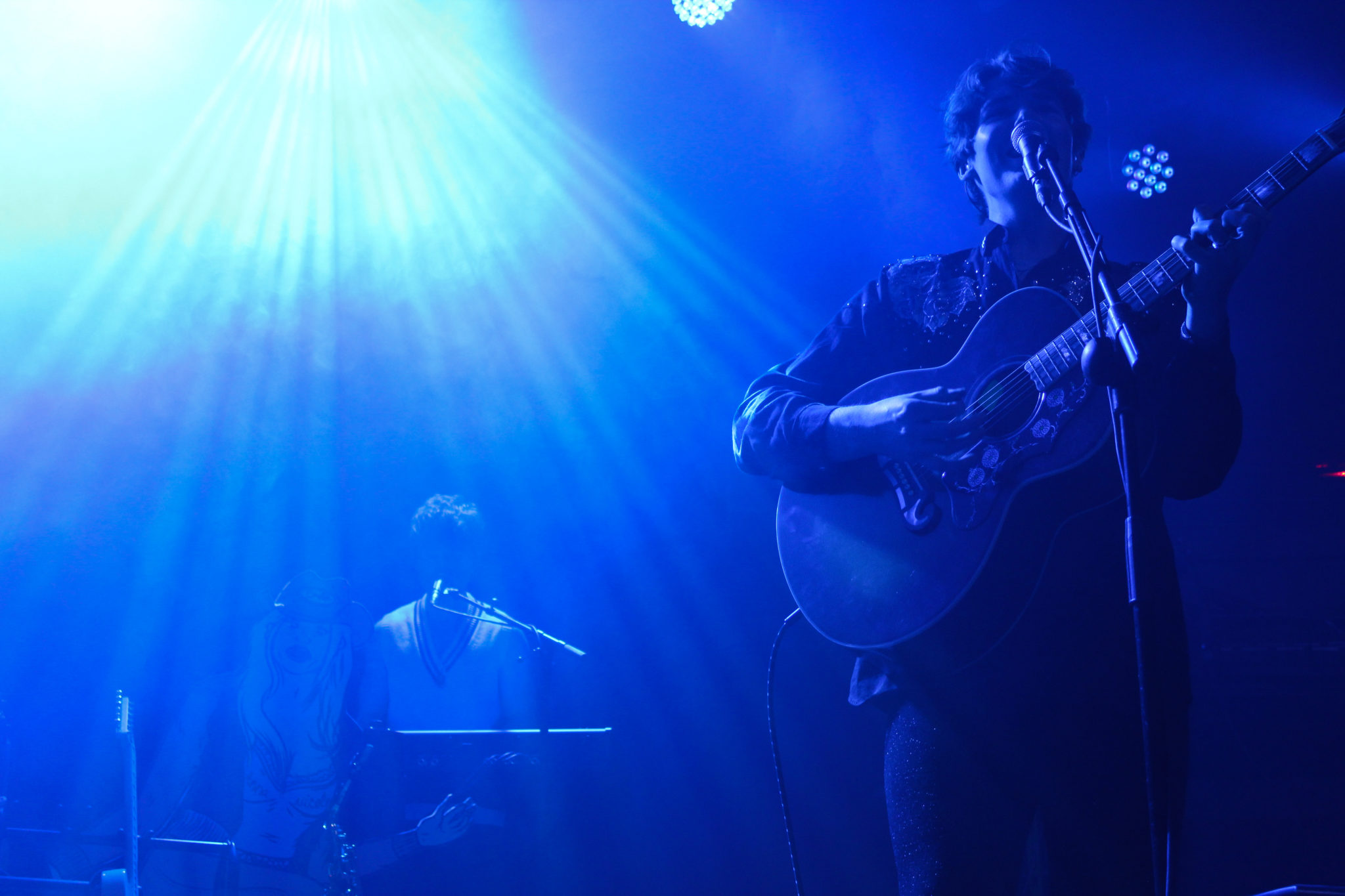 By the time the swells of intro track 'Nashville' ramped up and the auburn-haired vocalist made her first appearance, this crowd was primed and ready to give the singer their all. From the way the hometown audience joined in on the first lines of the track "My hair is going high as Heaven / So long and softer than a bed" with an almost deafening fervour, it was clear this show would be a special one.

CMAT rose the occasion, showcasing her soaring vocals and singular stage presence across the opening number and the insatiably groove-driven 'Lonely'. Following the first two tracks, the crowd broke out into chants of "Number One! Number One!" With a wide grin and an affectionate eye-roll, the singer replied "you cherub-d***-heads, it's only two songs in and you're gonna make me cry."

It was a heartening night through and through. While fun-loving grandeur and wry humour are inescapable at a CMAT show, there was also a marked sense of earnest pride. After becoming only the second woman in Ireland to have a debut chart-topper, it seemed to be special for the singer to return home in the wake of the news. To add to this, joining the ranks of the crowd was the artist's family. As the house lights lifted, the audience once again joined together in a chant, this time in celebration of CMAT's nan.

One of the highlights of the setlist for me was 'I'd Want You', in which she settled in right at the front of the stage and crooned through the poignant number in a departing somber moment. Being one of the more unadorned tracks on the album, it allowed for her impeccable vocal range to shine. Another peak was the 2020 single 'Rodney'. Ahead of the song, CMAT noted "There were some people that didn't like this song because they didn't get it. A song doesn't have to be good to be good. It just has to be fun." And fun it was. Throughout the duration of the floor-thumping track, it was clear both she and the audience were having the time of their lives. 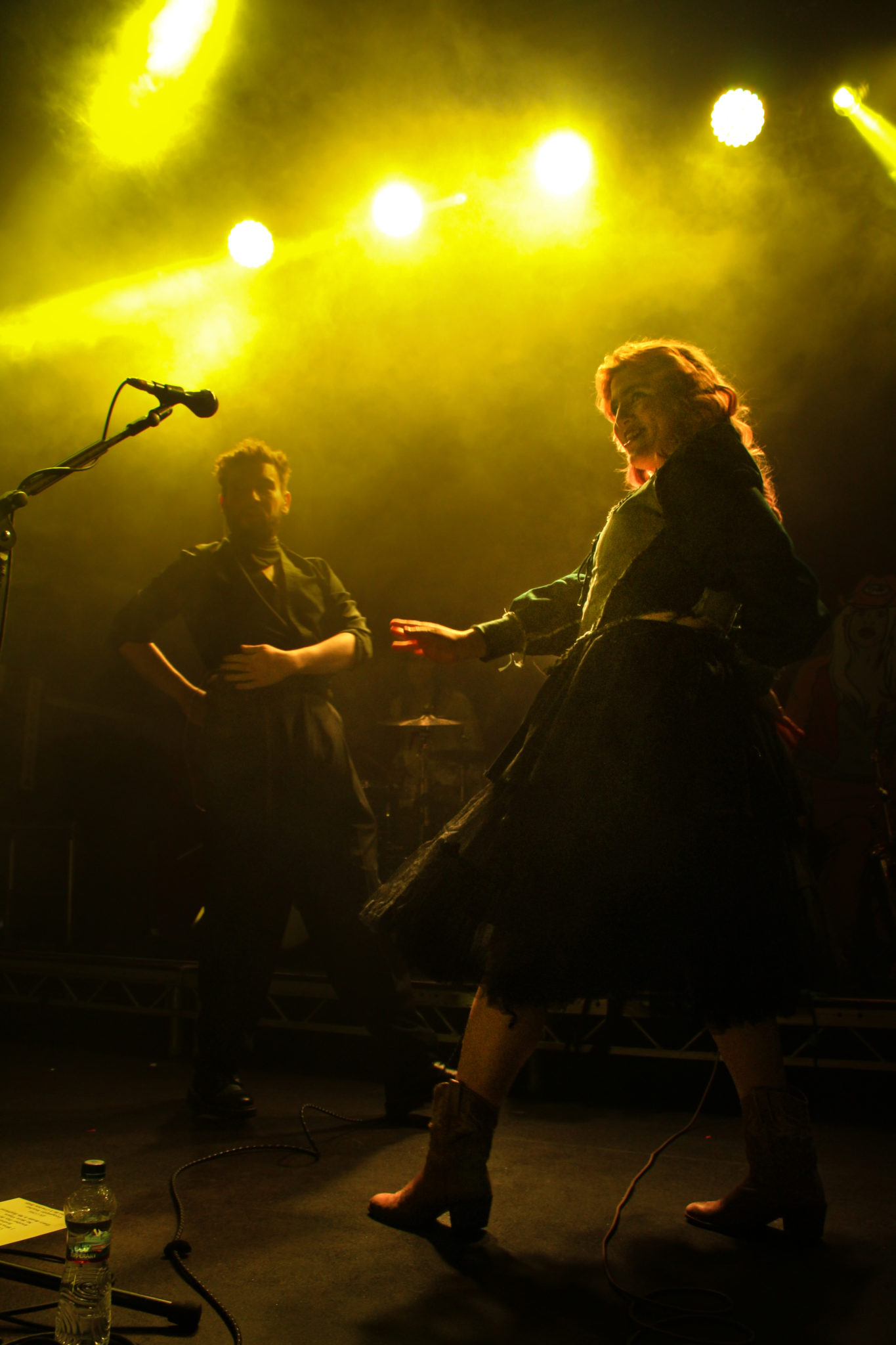 Other notable moments included the pop-perfection of 'No More Virgos' – with a wave of inflated beach balls to boot – the pulsing 'Every Bottle Is My Boyfriend' wherein CMAT gave all of her energy over to the rockier-side of her persona, and 'Geography Teacher' that saw her in another swaying ballad.

She ended the night with several rounds of the anthemic 'I Wanna Be a Cowboy, Baby!' Despite being the end of the night, the crowd joined in on the dream, whipping their "lassos" around amid falling confetti like it had just begun.

Today (March 14), CMAT is beginning an international tour that sees her across the US and UK. Her often jokingly self-dubbed status as a "global pop sensation from Ireland" may not be such a joke after the world sees the name-making performance that was on display at The Academy.

Revisit CMAT's cover story for our Hot for 2022 issue. In the interview, she chatted with Ellen Gough about her sizzling, stratospheric rise.

Every Breaking Wave: Pop – "The truth is that pop has long served as a vehicle for groundbreaking revolutions, both in music and wider society..."
Live Report: Irish artists shine at Body & Soul in stripped back solstice celebration
SXSW: Irish acts put homegrown scene on the map at Austin music festival – featuring Pillow Queens, CMAT, Just Mustard and more

Hot Press Playlist: The Road to Electric Picnic 2022
Album Review: CMAT, If My Wife New I’d Be Dead
CMAT: "This is what I’ve wanted to do since I was born. I don’t think I planned on being anything other than a musician"
CMAT graces the cover of the Hot Press 'Hot For 2022' Issue
New Irish Songs To Hear This Week
Hot Press Top 50 Tracks of the Year 2021