Dutch soprano Judith Mok, a renowned classical singer and writer, has performed some of the most famous operas and written books in multiple languages. But she’s also one of the most sought-after vocal coaches in Ireland – if not the world, working with the likes of Grace Jones, Thom Yorke, Glen Hansard, Steve Garrigan of Kodaline, and more. Here, she discusses relocating to Ireland, her talented pupils, and how she helps them achieve their dreams.

It's a well-known industry fact that if you're a professional Irish singer who wants to truly master their voice, you go to Judith Mok for singing lessons.

Born in Holland and raised among artists, Judith began her career studying at the Royal Conservatory in the Hague. The school is Europe's most well-respected Arts Academy, equivalent to Juilliard, and the formative education opened up a vast world of musical knowledge to the perpetually curious soprano, who was just fifteen when she began her classical music degree.

"I was a ballet dancer," she explains, perched on the sofa of the Portobello apartment she now shares with her husband, poet and writer Michael O'Loughlin. (Where – incidentally – you can occasionally catch her giving lockdown opera concerts from her balcony on a warm day).

"I auditioned for the dancing school and got in, and the director said, 'I hear you sing as well'. When you're a teenager, you're either completely inhibited or completely uninhibited,” she laughs. “I just thought, 'yeah, whatever, I sing Mozart.'"

The rest, as they say, is history. Judith spent five years studying there, had her first short stories published at 19, graduated at 20, and has since performed in some of the world's most renowned opera houses.

After meeting her husband, the couple moved from mainland Europe to Ireland, although it took Judith a while to settle. "When I moved here I had lost my mother, my father had died, I have one sister in Holland...I had absolutely no family close to me," she says. "I was not prepared for it at all. I came from such a different culture, and suddenly I was confronted with all these walls.

"I knew quite a lot of writers through my husband, but I was very isolated. And I wasn't used to being isolated, because I'm a very social person," she explains, taking a long pause to contemplate. "I suppose I was a strange fish, though.”

This was before her teaching days. "It was also the first time I was confronted with the question: 'what do you do for a living?'"

She laughs sharply. "I've been singing for my living since I was 18 years old. It never occurred to me that you could do anything else."

Did people in Ireland find art as a primary source of income strange?

"Well, they just didn't understand," she says. "But that is just who I am. And that is probably why I'm so vehement with my very talented pupils, who have a dream. I want to respond to that, and let them know that they can learn and structure their dream with an excellent musical and technical education.

"They can go and live as an artist, and not have to do something that has nothing to do with art, or is soul-destroying for them."

But Judith found her footing here in Ireland soon enough. In part, she says, thanks to Glen Hansard.

"He really believed in the work I was doing,” she says warmly. “He's such a refined artist, and he's very intelligent. Glen was one of the first people in Ireland – though we come from completely different worlds – he got me.

"He understood the worth of the technique and the voice, and what I could bring to the table. He's the one who really got me going in the direction of teaching here," she says. "I'm obviously very grateful for that."

Judith uses a combination of methods to train her students – who range from megawatt stars like Dermot Kennedy and Hansard himself, to indie stalwart Faye O'Rourke (Little Green Cars/Soda Blonde), to up-and-coming talents like Gemma Dunleavy and Isaac Butler.

"It's just treating the vocal chords," she says. "I do use a basic breathing technique, but I'm extremely open to the body. I look at everybody individually. Obviously, there is a basis to what I teach them. Breathing is colour, it's the song line...it's everything. In their bodies, I always try to teach the utmost 'control of relaxation'."

On the other side of the coin, however, Judith's techniques are never dogmatic. That would be counterproductive, she says. "There's a space in the body where you breathe, but I'm not going to say 'only there!' That is a problem that often happens. I've had teachers who are terribly dogmatic, and you can destroy somebody.

"I like to look at the whole person," she continues. "I sort of grow myself in their persona, and in their body. I only know what I know, but I am the instrument that will – hopefully – transform them into what they can be. I'm not tuning them into my technique, I'm tuning them into themselves."

What are the biggest concerns she has for her students' voices?

"Let's face it, there's a lot of vocal talent in Ireland," Judith says. "They start off with a great talent to write music and songs, and then they get signed, and suddenly they have to sing 6 or 7 gigs a week, but they don't know how to use their instrument. That's fatal."

Judith began to train one of her higher-profile pupils, Dermot Kennedy, after he skyrocketed to international notoriety with dizzying speed. When he went to work in Los Angeles, Kennedy was shocked to discover that everyone around him was working with a vocal coach.

"If you go to L.A., there are coaches everywhere," Judith laughs. "You name it, the biggest stars in the world – they all work with coaches."

"Singing is a natural thing in Ireland. You sing in a pub, you sing outside, you sing at parties...so perhaps they're a bit reluctant to believe that coaching is going to help them."

Judith will occasionally tour with Kennedy and Hansard, ensuring their voices are in the best shape they can be for long periods of time.

"I want them to be completely and utterly comfortable with themselves and their voices," she says. "Loosened up, and aware of what they're doing, and knowing that they can rely on their technique and their bodies.

"I also always tell them to almost forget about everything when they're onstage. You have to bring it across and perform it – it has to look effortless.

"I am surprised about how many people go into vocal coaching not understanding it," she says, slightly exasperated. "There are a lot of misleading videos on YouTube, where people tell you to do all sorts of screaming – that's the danger of the Internet. I've had really bad teachers and really good teachers, but you can so easily destroy a voice."

Having worked with some of the best vocal performers in the world, including Grace Jones – "a tremendous artist and a mega-voice," Judith quips – the opera singer has gained a reputation for being a musician's go-to.

Whitney Houston infamously came to Judith at midnight, entourage in tow, begging Judith to “fix her” before a performance.

"When she came to me she already had terrible vocal problems," Judith explains. "She was staying very close to me, so she came..." she trails off. "I can't fix somebody overnight, I'm not a miracle-worker."

Miracle-worker or not, it's impossible to deny that Judith has become an expert at her craft. She has been expanding recently to work with actors, theatre troupes, and other types of performance. Among them is James Thiérrée, Charlie Chaplin's grandson, who blends circus performance, mime, dance, and music into his shows.

"He's a classical musician as well, but this is the first time he sings in a show. I started singing with the troupe, and he said: 'you should be in the show. Why are you here as my coach?',” she laughs. “But then, of course, everything stopped. I would still be in Paris working with him now, if things were normal...but I'll pick it up again," she adds. "Meeting that whole gang has been a very different experience for me."

While Judith is well used to working with rock and pop styles, some of her newer Irish pupils – namely breakout R&B star Gemma Dunleavy and sean-nós singer-songwriter AVA – have also presented her with exciting new opportunities.

"I find the contrast between different vocal styles very interesting. We really stretched Gemma Dunleavy's voice, and AVA comes from Celtic Woman and is a fantastic songwriter," she says.

"They're all so hard-working, eager, disciplined. I love the difference in approach, and the fact that they trust me. And if they are disciplined," she adds, "the technique will work.”

Judith trains them to sing with no microphone, as much lung power as possible, and "with total control of their vibrato,” she explains. “But that doesn't mean I don't integrate a singer-songwriter's way of singing into training classical musicians.

"I was working with a Wagnerian soprano, and I told her, 'can you please sing like Lady Gaga'? Because she knows Lady Gaga and she loves her. She did, and it was perfect.

"Opera is a fantastic art, because you can move around – you can sing lying on your back if you want," she says. "I like working with singers who jump around the stage, and move. They always ask me if that's okay. As long as you control your breath, you can do whatever you like." 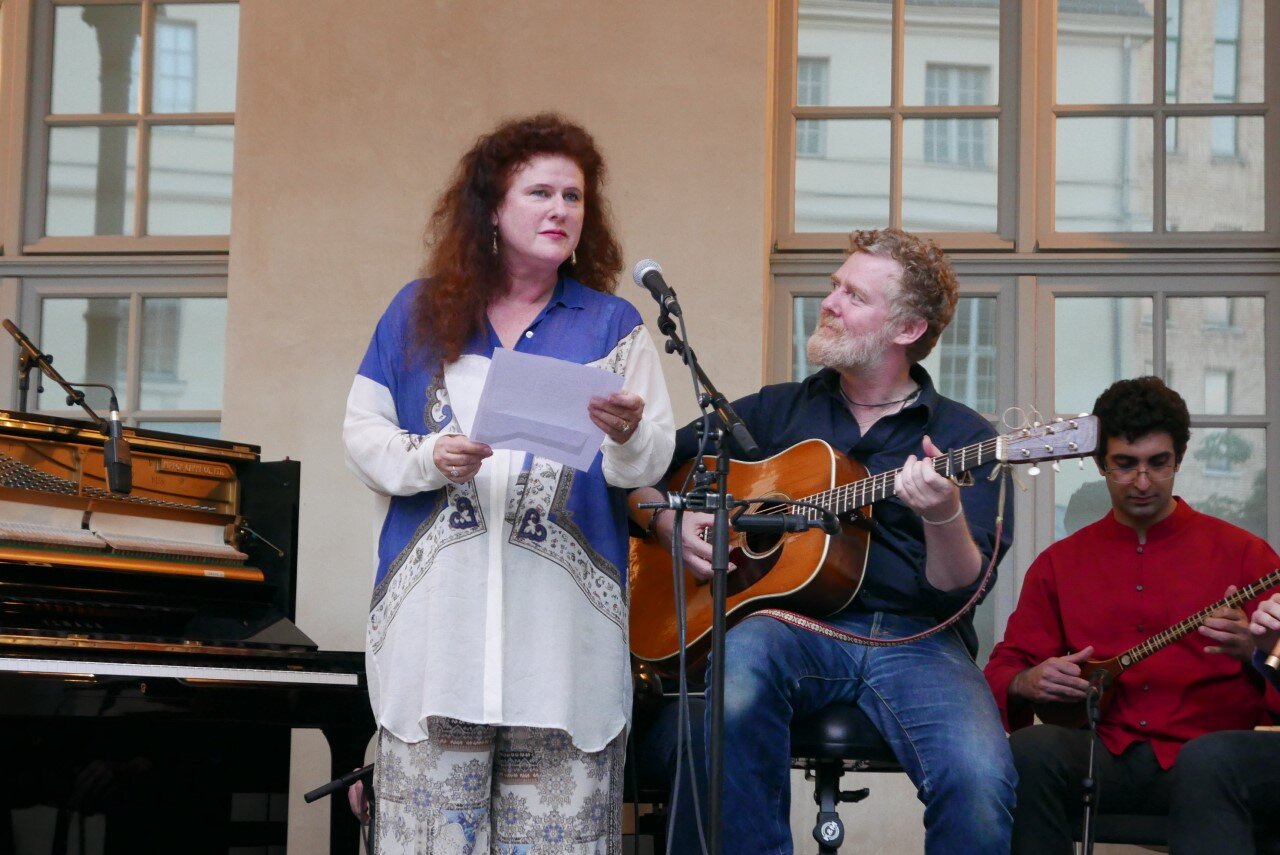 All this is to say, Judith concludes, that her pupils are incredibly intelligent about their own voices. She doesn't know of any artist that she works with – across any genre – that isn't totally committed.

"I did make that mistake in the beginning," she admits. "I had a little bit of a parti pris – a bias. I was judgemental. I had these ideas about music that I had to withdraw, and look at the work and realise that there is no difference between the hard-working popular singer and the hard-working classical singer. But it is like a sport, and you have to train every muscle."

• Judith has published novels and poetry collections, and her new non-fiction book The State of Dark, about her family and the Holocaust, will appear soon. You can find out more about her work at her website.