Having produced a string of anthemic cult hits, Pillow Queens are about to ascend to the next level courtesy of their stellar debut In Waiting. They discuss early influences, political tumult, Dublin’s current cultural landscape and more.

Pillow Queens are converging around me from various corners of the Workman’s Club. Sarah Corcoran appears suddenly through a door at my side. Pamela Connolly and Rachel Lyons clamber down from stage left. They’re followed a few seconds later by Cathy McGuinness, who saunters in nonchalantly. The ramshackle quartet pile onto the sofa, chatting with – and over – each other enthusiastically.

Having formed several years ago, the band are now just weeks away from unleashing their debut album, In Waiting. And so – to begin at the beginning – we’re talking early influences.

“Fleetwood Mac, Mary Black,” says Rachel. “That’s not the first time I’ve made that rhyme, I swear it’s not intentional.”

“I would have been influenced by my parents’ tastes,” says Cathy. “Leonard Cohen and Simon & Garfunkel were big ones. It was fun, finally deciding what music you like. I listened to a lot of Garth Brooks in the car as a child, and then got into Nirvana and grunge when I started buying music myself.”

“We really bonded over Eagle Eye Cherry, too,” offers Sarah.

“I used to love it when people gave me their hard drives,” Pamela says. “But I would have been into a lot of cheesy pop as well, because I had so many sisters.”

“Oh, that first Maroon 5 album was art to me,” Sarah interjects. “Pamela’s hard drive is probably formative of my taste, actually. Mine broke when I had just met her, and I said something about it on the internet, so she lent me hers. We didn’t know each other, but Rachel’s band was on the drive. I probably had the three of them on my iTunes before I knew any of them.”

The four women knew each other peripherally before forming Pillow Queens. There is some confusion as to who met who first – apparently Cathy begged Pamela to participate in a music event she was putting together, and somewhere along the line Sarah and Pamela decided to form Pillow Queens.

“I always come out looking like a weirdo in this story,” Cathy laments, though she does credit Pamela with breaking her into the music scene. “I felt I was the only person in Arklow with a guitar, at the time.”

Whatever the specifics, they all seem to be responsible for some of the formative musical experiences of the other band members.

“Before we started the band, I quit my job,” Pamela says. “I was like, ‘I’m going to go do music with Sarah. And she says everything’s going to be fine’.”

“And didn’t I deliver!” adds Sarah.

It appears she did. Pillow Queens have spent the past three years steadily building a cult following in Ireland. Their debut EP, Calm Girls, saw the group mentioned frequently in ‘Ones To Watch’ articles, and thrown into the ring with the likes of Fontaines D.C. and The Murder Capital as part of Dublin’s punk renaissance. A compliment, to be sure, although Pillow Queens see themselves operating outside the genre.

“If we did decide on a genre, we’d be limiting ourselves massively,” Sarah says.

“You want to feel like you have the space to play ‘Harvey’, or bang out an aul’ crooner song,” adds Pamela. “The punk label might have been more representative of us when we started out, because we did have more of that DIY, fast-paced, punchy sound, but I feel we’ve outgrown it now.” 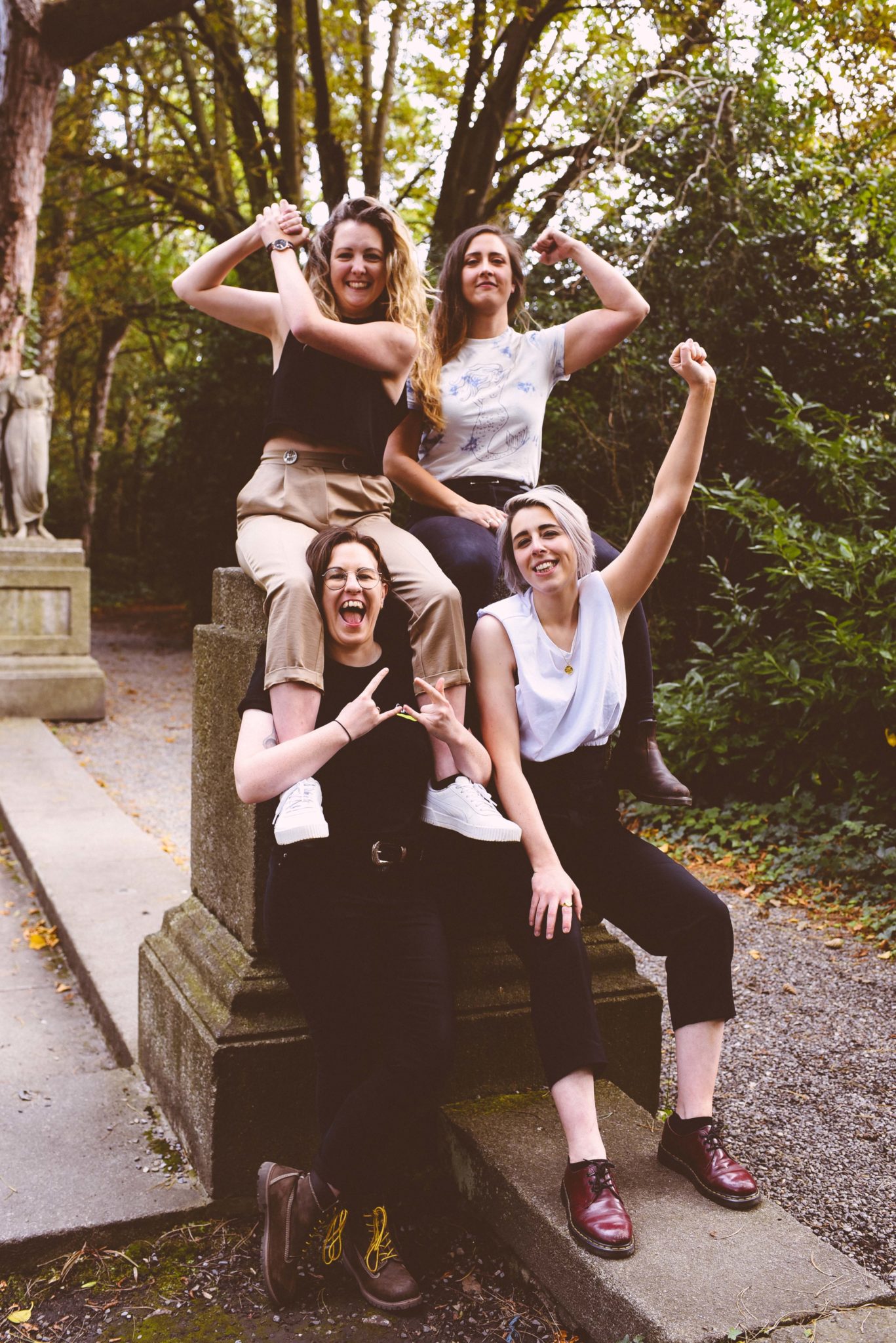 “We don’t need another label,” Cathy laughs, referring to the ‘queer band’ designation stamped haphazardly on them from their debut. I get the sense that they’re tired of it.

“The longer we go on,” she adds, “the more comfortable I get with that term. It doesn’t feel like we’re pigeonholing ourselves anymore. By saying we’re a queer band, you know our politics, and you know vaguely what our influences could be.”

“At the beginning, we didn’t want to be labelled or to label ourselves a queer band, but we did want everyone in the band to be queer,” says Rachel.

While they may have initially resented the immediacy of the label, they can’t deny it’s quietly radical (or at least significant to the LGBTQ+ community) for a group of confident gay women to open their debut album with the lines: “I’m still a baby/ if you’re still waiting outside/ I’ve got your eyes and cheeks in front of me/ Filling the space between my thighs.”

“I think another band with exactly the same opinions, who happened to be all straight men, wouldn’t be asked the representation question,” says Pamela. “We don’t want that to be the only thing we’re ever asked about. We sing about love and sadness, too.”

There’s a lot riding on this debut album, and playing the streaming game is a double-edged sword. On the one hand, it’s been easier for Pillow Queens to develop a solid fanbase on the back of their EPs and singles. On the other, those fans are now expectant, some of them having waited years for a full-length work from the quartet.

“I like to take the journey with the band,” Cathy says, nonplussed. “I’ll wait ten years for the album and anticipate it.”

“My nervousness comes from the amount of already-released singles that are on the album,” Pamela admits.

“But an album is a collection of songs,” chimes Rachel – who appears to be the group’s voice of reason and grounding force – from the corner of the sofa. “You shouldn’t be worried about that.”

She’s right. The greatest achievement of In Waiting is that it truly signals Pillow Queens' arrival. They’ve jumped the hurdles and experienced the growing pains, and landed as a band with an ability to seamlessly blend genres, shaping them into something new and uniquely their own. Nestled between the hazy, raucous guitar sound the group are known for, sits world-weary and passionate poetry that touches on grief, love, politics and identity. 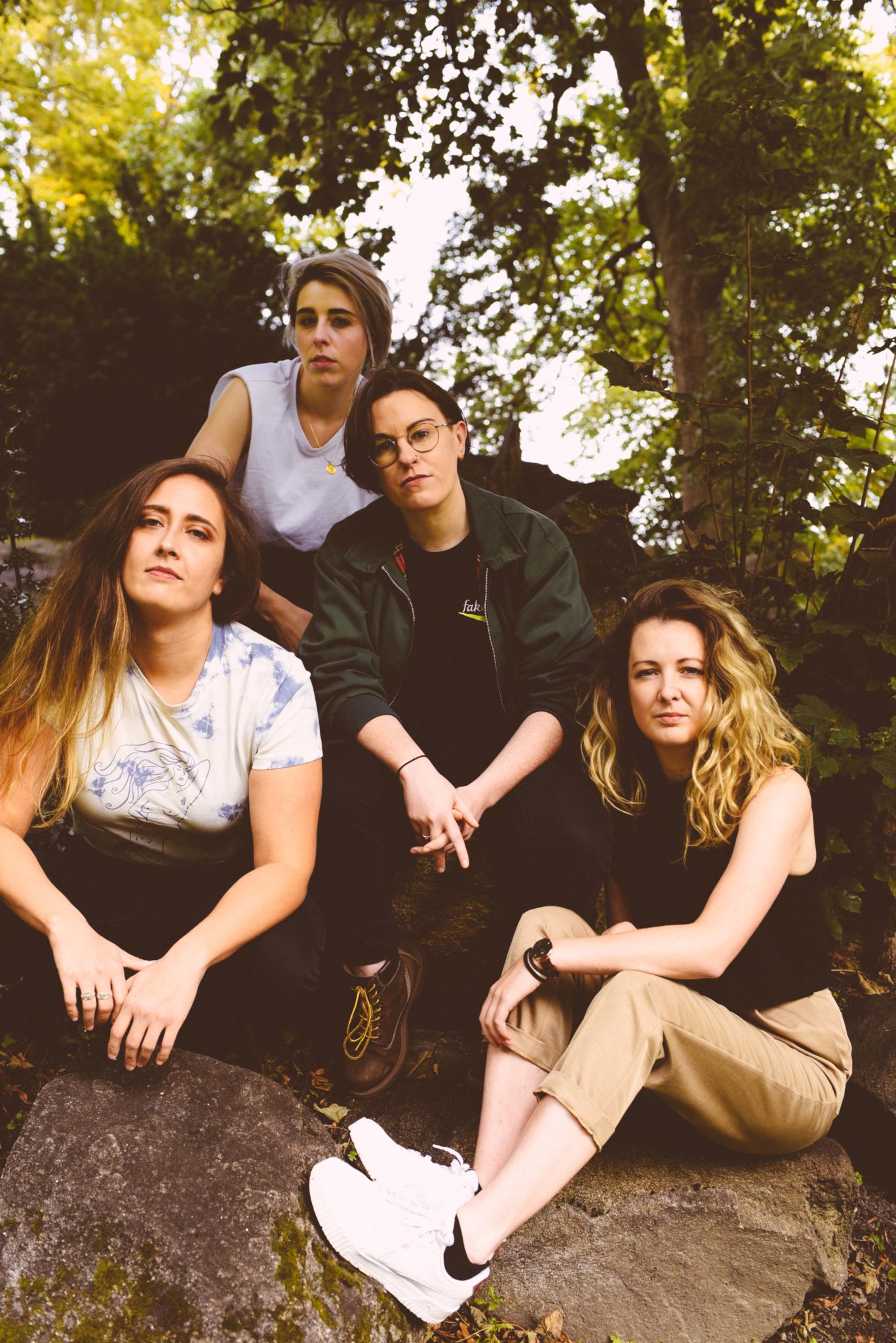 Dublin is a large part of the band’s collective identity, though they are critical of the government on In Waiting, raging about the housing crisis on tracks like ‘A Dog’s Life’.

“We were supposedly in a boom, before the pandemic,” Rachel says.

“Thriving,” Sarah adds, rolling her eyes. “Have you been down the Docklands?! The smell of wealth! But that’s not the reality. If you go anywhere in the city centre, you can see it.

“When the election was taking place, everyone was saying we were going to really tackle the housing crisis. Now nobody’s talking about it, and there are literally people dying.

“There’s a massive disparity between people who are thriving and people who are very much not. And nobody at the top cares, there’s no consideration. On paper we’re doing really well, but the citizens can’t afford to live here.”

“It seems like a topic people are desensitised to,” Cathy adds. “It feels like there’s no compassion anymore.”

Still, the consensus is that they would rather live here, and fight for change, than flee to another music industry mecca.

“I went to a meet-up in February with a load of bands and artists who are at the same level as us and live elsewhere, and I asked what they all did as their day jobs,” Sarah reflects. “They all went, ‘No, I’m a musician, and I’m valued as a creator’. I thought, ‘This is mental! Why would they give you money for doing music?’ Because they’re putting their life’s work into it. We have an audience, fans, we sell out gigs, we’re good for the economy in terms of export. I’ve just been completely brainwashed by my government.”

“So basically, we love this country,” Pamela laughs. “Honestly, it can feel like an unhealthy relationship, but if I ever left Ireland, it would be under duress.”

• In Waiting is out now and reviewed on hotpress.com. Pillow Queens play the Button Factory, Dublin on February 26 & 27.