Gavin Friday breaks cover this month to appear at the National Concert Hall as part of an intriguing line-up for Change The World: Bertolt Brecht Songs and Poems 2019. It’s been a life-long obsession, as he tells Pat Carty. Pic: Peter Rowan.

Gavin Friday, he of art-rock pissers in the punch The Virgin Prunes, and the man behind such undervalued solo work as 1995’s Shag Tobacco, developed a thing for the plays, poetry and songs of Bertolt Brecht early on. It was hardly the fare of day time radio so how and why did it capture his attention?

“It was Agnes Burnell (the German actress and singer, and propaganda broadcaster, who worked with everyone from Elvis Costello to Tom Waits) who gave me these cassettes of The Threepenny Opera when I was about seventeen or eighteen” Friday recalls. “Guggi was going out with her daughter and she came to see the Virgin Prunes to see what her daughter was into! She invited me up to the house and said ‘you need to learn other stuff, you need to learn about German music.’ I believe that when you're young you're attracted to things even though you don't fully understand them. The very famous movie Cabaret with Lisa Minelli was basically set in the Weimar republic. The movie would still visually blow the bollocks off ya, it's very beautiful. I was very attracted to that era, but Cabaret  is almost like a pop song compared to the real guttural work of Brecht. I had this sort of attraction to the burlesque, to the drama, to the whole melodrama. It was the late seventies and punk rock could change the world! Brecht was very anti-bourgeoisie, creating realistic art by pulling down the curtain to a blank canvas.”

There was something to his theory of Epic Theatre, there’ll be no touchy-feely Aristotelian reward for the audience?

As punk limped towards a new decade, travel broadened Friday’s mind and his obsession grew.

“Punk sort of flattened out for me, basically everything sort of goes up it's own ass. ‘Oh! Johnny Rotten is a capitalist, so is Joe Strummer, they smoke spliff, they're hippies!’ So suddenly all those dreams come down. I wisely as a young guy went away from Ireland to Europe. The eighties was moving in fast, you look back at some it with great memories but most of it was fucking shite. What? Duran Duran are heroes? They're just a boy band with bad make-up! I almost call The Virgin Prunes my university, we were travelling around and I was discovering more about Brecht, buying every album that I could, even though it was in German and I didn't speak much of that. My three big leaps as a kid were Bowie as a 12 year old, then Johnny Rotten at 16, 17 year old, and then it was Jaques Brel and Brecht”

Friday, and The Prunes, were more at home with that European sensibility. They didn’t want to play the blues. This was more interesting.

“It was,” he answers. “it was out of us being self-thought musicians -  people said The Prunes couldn't even play, fucking listen back, it's a lot more musical than you reckon. But we took the philosophy. There was also the Bowie albums Low and “Heroes” which were far away from rock n’ roll and the blues.”

They’re incredible records in that on one side you have these dark, European instrumentals, and almost pop albums on the other.

“Works of art,” Friday agrees, “But the pop sides are about a man depressed, trying to get off drugs, his marriage had broken up. He was sitting like ‘blue, blue room’, get me fucking out of here, crashing cars, it wasn't like ‘Hey, baby, Rebel Rebel!" It was a different thing. So they were the touchstones.”

When Bowie did a production of Brecht’s Baal  for the BBC in 1982, Friday must have felt all his Christmases coming together?

“You know what's so strange about it? It was so random, suddenly David Bowie is doing this hour and a half musical play. It's the last thing he did before Let's Dance so it was the end of Bowie as the outsider. You very rarely heard his voice sing such lurid and sloppy lyrics. The thing is Bowie got slated as an actor for many reasons but he's fucking amazing in The Man Who Fell To Earth and in that Basquiat thing as Warhol.”

He even managed an acceptable Pontius Pilate.

“Absolutely but when you see the Thin White Duke suddenly appearing with piss stains, rotten teeth and stubble, a lot of people don't talk about it, ‘that couldn't be David’. Do you know what I mean?”

It’s placed outside his canon.

“It's not his greatest work, but it's fucking good. There's a song on it called 'The Ballad Of The Drowned Girl' and if you go to YouTube, you'll see his recording of it is absolutely stunning.”

He could have sang the phonebook and it would have been good though.

“I think he could have, yeah.”

Fast forward to 2001 and Friday, alongside his long-time collaborator Maurice Seezer presented their own theatre show, Ich Liebe Dich, based around the music of Kurt Weill and the lyrics of Brecht.

“Fergus Linehan wanted me to do an interpretation of The Rise And Fall Of The City Of Mahagonny (satirical Brecht/Weill opera featuring the famous ‘Alabama Song’ that you may know from Bowie and The Doors), it was way too much to take on. We covered Weimar to Broadway, from 1928 up to when Weill died (1950). It was quite a thing, I’m very proud of it.” 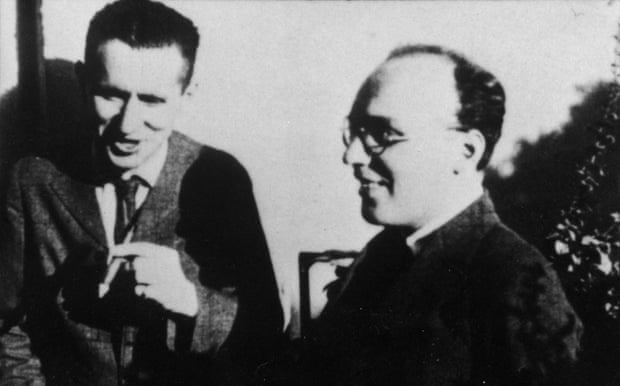 Bertolt Brecht and Kurt Weill, having a laugh.

The title of this show – Change The World – speaks to the relevance of the material to today’s ears.

“That’s the idea,” Gavin nods. “It’s ninety years ago, so the refugee issues and the rise of the right wing were happening. The lyrics could have been written for this era, although Change The World as a title is not punk enough.”

There is a slight whiff of Band Aid off it.

“I would have gone with Smack The Fucking World With A Hammer, but there’s seemingly some poem, and it’s not my show!”

It was Gary Sheehan, programmer with the NCH, and musical director Terry Edwards that persuaded Friday to sign on.

“They asked would I be interested in doing Brecht and I'm always interested in that," he states, emphatically. “They said we have an interesting cast. Ute Lemper, one of the great chanson interpreters of Brecht and Weill, and Blixa Bargeld of Einstürzende Neubauten and The Bad Seeds who I know from my punk days. Meow Meow takes the burlesque sexuality thing and brings it to another fucking level. Eric Mingus – son of Charles – is a phenomenal musician, and Michael Blair was the percussion genius behind Swordfishtrombones and Rain Dogs. When I heard the guitarist and the piano player were from The Blockheads, I just went ‘Ah, for fuck’s sake!’, and Cathal Coughlan who is one of our great unsung singers and intellects. People call him an ‘arty fucker’ but what’s wrong with being arty?!?”

This kind of music and engagement reflects badly on a lot of what’s being produced at the moment.

"Yeah, I’m in the process of finishing an album for the first time in a while. I’m rarely political but I’m getting anxious with the fucking way the world is and if we don’t write about this or talk about it…”

Isn't that the artist’s job?

“Yeah. I think it's really important, I actually think people will go about these young writers, ‘this was happening and you were writing about NIKE and getting off in Ibiza with a fucking gang of heads. Hello?’ I do have an affection for the young punky bands that are coming out of Dublin, it sounds like The Fall meets The Pogues!”

“I think great, at least they're actually being young people, being pissed off and being Irish. I have an affection for that young kid Soak, I think she has a beautiful voice,  but do you know what compels me? This is weird, I watched Fleadh TV last week and it was fucking great. What I was seeing was young kids, fellas in their trainers and their hoodies, and girls with their tats, playing fiddles and bodhrans. I'm a big fan of Martin Hayes and The Gloaming, and all of this is seeping into young kids which is more interesting than fucking going to Whelan's!”

There's a crop of bands at the moment who seem very corporate in their outlook.

"Are we going to make it?" I mean, will you just write the fucking song!”

Let's get back on topic, there's a theory that Brecht and Weill helped invent Broadway.

“I think they did, Weill really did, the song writing was fucking mind blowing. Kurt Weill was a student of Schoenberg who basically invented atonalistic music, this sort of sharp, Germanic, I'm going to have a nervous break-down kind of shit, but Weill and Brecht were mad into Scott Joplin, this Americana, this exotic jazz coming from America. They combined it with this European aesthetic.”

With the cast that The National Concert Hall has gathered together, it was never going to be a simple case of people getting up and just singing the songs. Certainly not for Gavin Friday anyway.

“It's very theatrical, and with the calibre of these extraordinary musicians, you're going to get real music. These singers don't just stand there and go ‘here's the next one’. Every one of the performers are theatre in their own way. The whole thing with Brecht and me is give me a bentwood chair, a bulb, a cigarette and a microphone and that’s theatre.”

We’ve seen that bulb before, with friends of yours. Has a Brechtian influence spilled over from you(U) to(2) them?

“Some of it, yeah. I mean Yes!” he laughs. “I'm one of their creative friends, but I think everyone knows that. To tell the truth, I very rarely talk about it, they get so much press, and I don't!”

Change The World: Bertolt Brecht Songs and Poems for 2019 takes place in the National Concert Hall on the 14th and 15th of September. Gavin Friday is currently putting the finishing touches to a new album that should appear next year.