The first in a series of gigs curated by Hot Press in One Windmill Lane features Hothouse Flowers – and Moya Brennan of Clannad in a special guest role and Erica Cody in support. It turned out to an evening of extraordinary music – and vivid emotions. Peter McGoran and Pat Carty report.

So here we are, back in Windmill Lane: that is, in the street itself, which was the original location of the recording studios of the same name. Except the street has been transformed, with new buildings going up all around, in effect creating the newly-styled Windmill Quarter. It is a rejuvenated part of Dublin that we’ll be hearing a lot more about.

Inside the atrium of One Windmill Lane, the flagship building, the joint is already jumping. The first gig in the Windmill Live series has been a hot ticket these past few days, with many hundreds people applying via hotpress.com to see a free show that promises much. The lucky ones have been selected, there’s guests on the premises too and the sense of anticipation is running high: there’s the intriguing prospect of Hothouse Flowers being joined onstage by Moya Brennan of Clannad to look forward to. But first, there’s an up-and-coming Irish soul singer to reckon with…

WIT AND SINCERITY
Erica Cody is one of the artists we’ve had our eyes on in Hot Press, since Electric Picnic 2017, and her blistering performances in The Story of Hip-Hop. Tonight, she has the honour of being the very first artist to play the Hot Press-curated Windmill Live series.

Up to now, Erica’s performances have involved a DJ and a dancing crew. However tonight sees her embrace a different musical direction, with just her and a guitar-player on stage. She kicks things off with ‘Good Intentions’. Released just over a year ago, this single teed Erica up as a true rising star. Here, she executes the song with a beautifully measured vocal, confirming that – even when you take away the razzmatazz and the dancers – there’s still a wonderfully powerful voice at the heart of this music.

Next song ‘Where You From?’ deals with the experience of being a mixed race woman in a country where people still apparently think that’s somehow surprising. It addresses the endless questions which non-white people are asked: “Can I touch your hair? Is that a tan? Where are you really from?” – and it’s delivered with a potent mixture of wit and sincerity.

‘Over and Over’, Erica’s newest single, is her final song on the night. An anthem for anyone who needs to get over that person that’s been messing with your head for weeks, it has hooks for days, and makes us more excited than ever to get our hands on Erica’s debut EP – coming soon! Once again, stripped down to just Erica and her backing guitarist - it works incredibly well. It all adds up to a fine opening salvo. (PMcG) 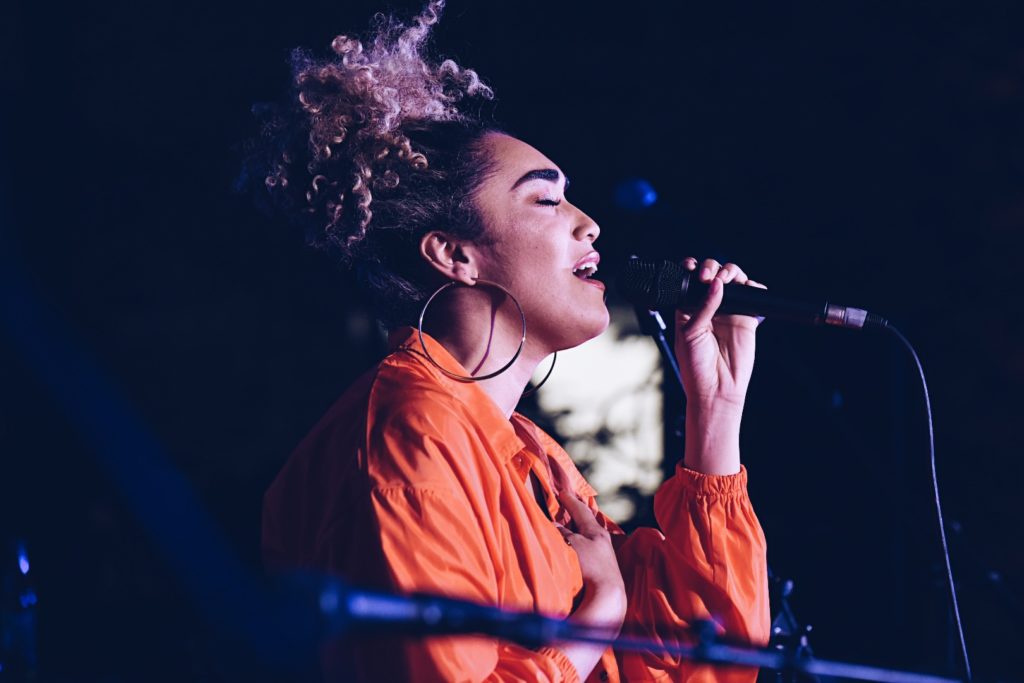 Liam Ó Maonlaí’s “talking about PEOPLE!” He’s bellowing, he’s howling, he’s roaring. “Yeah, COME ON!” And then that instantly recognisable riff from ‘Feet On The Ground’ kicks in, an Irish No.1 single, recorded, as far as we can ascertain, for records of such an ancient period are scant at best, on or near the spot where we are stood, here in the almost mythical Windmill Lane.

Hothouse Flowers are the perfect choice for this, the inaugural show in the Windmill Live series of gigs intended to bring music back here, to the newly styled Windmill Quarter – for they were one of the most successful acts to emerge in Ireland, when all eyes were on this quayside street, from 1978 to 1992, before the studio fully relocated to Ringsend Road (whence it still operates with great success, attracting artists from all over the world to record in Dublin).

The first song still isn’t over, but Ó Maonlaí is already tossing the hair, vamping on the keyboard and shouting at the ceiling – the man knows how to work a room. Now one might think, in a situation like this, given that it’s a one hour set, any sensible band would bash out the hits. Hothouse Flowers aren’t having any of that. They’re heading off wherever they please, and we’re going with them. 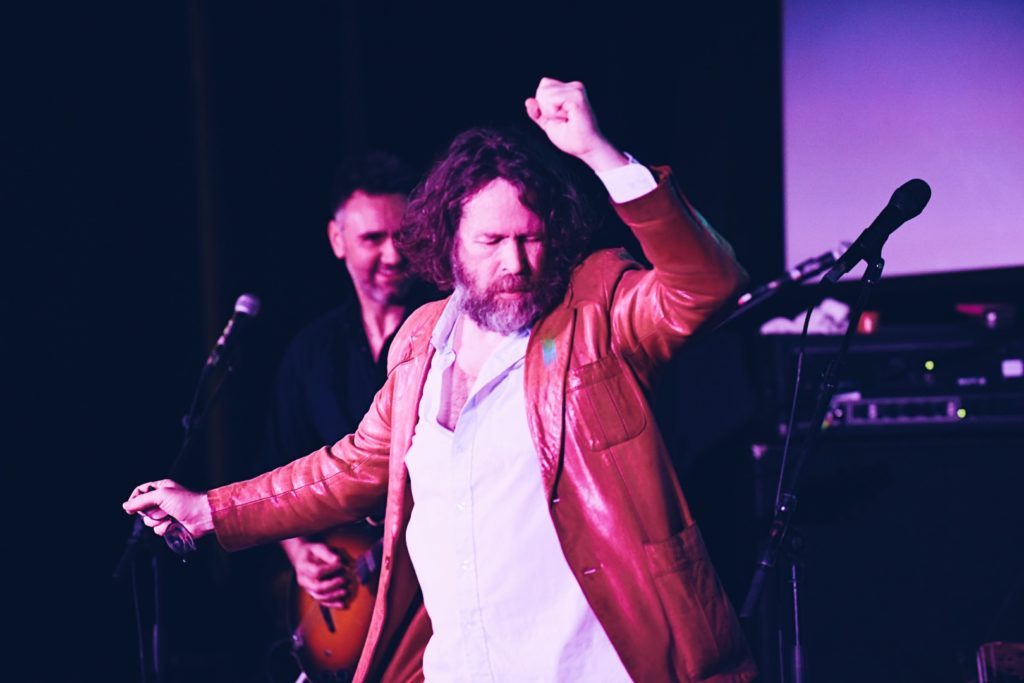 Accordingly, we get ‘Feel Like Living’ from 2004’s Into Your Heart album. It’s a beautiful song, although hardly their best known few minutes and you wonder if it can hold the room, but then… then the magic starts to happen. You can see now that people have really begun to pay attention, recognising there’s something happening here. Ó Maonlaí’s voice rises to a shamanistic roar before the song finishes with a delicate coda combining Peter O’Toole’s bouzouki, Fiachna Ó Braonáin’s guitar and Liam's keyboard.

If you thought that was out of left-field, how about a song going back to the time of the penal laws when to be caught at mass was to risk punishment of death? ‘An Raibh Tú Ar An gCarraig?’ asks the coded questions “Were you at the rock? Did you see my love?” – it could be a song of longing or a sly inquiry to see if the rituals of worship were going ahead.

Ó Maonlaí carries it over one repeated note from his keyboard. The crowd are hushed, awestruck. If a pin dropped, you could hear it. The spell is broken then, and the tension released by the magical sound of O’Toole’s bouzouki. Then the piano speeds up, picking out a recognisable refrain, and there’s a shout of recognition from the crowd.

What do you do, if you’ve been playing the same song for thirty one years? You do whatever the hell you like with it! ‘Don’t Go’ has now morphed into some sort of sonic monster of Led Zeppelin-esque duration. What’s going on? Is this African? Cuban? Bossa nova? Coláiste Eoin? Ó Maonlaí introduces the band and even that becomes part of the groove: himself and O’Toole break into the David Byrne running dance, as our emcee for the night Ms Róisín Dwyer, stood beside me, gleefully points out.

Ó Braonáin steps on the wah-wah pedal and Ó Maonlaí is off to the races, dancing for rain, declaring that when music hits, you feel no pain, doing the locomotion, one hand in the air like some trad Travolta, rubbing his belly for luck. Who was the old Celtic god of love? Aengus? Did he look like Ó Maonlaí in full flight? Probably.

We pause – dammit, I know, that’s not the right word! – for a drum solo from Dave Clarke and it turns out to be a stormer. He is a fantastic musician – the legendary Thin Lizzy stickman Brian Downey is seen nodding approvingly in the third row – and his virtuoso turn is matched by Martin Brunsden on double bass. Then, Ó Maonlaí’s back, imbuing the Dodder with Mississippian power, claiming a call and response from the throng and, finally, finishing out ‘Don’t Go’, lest anyone has forgotten that the song was still going.

‘Peace Tonight’, another one from Into Your Heart, is gorgeous. ‘See-Line Woman’ – a 19th century song brought to prominence by Nina Simone and included on the 12” of their first single back in the day by the Flowers that might be about prostitutes standing in line for arriving sailors – sees Ó Maonlaí lose it to O’Toole’s bouzouki wrestling. He shakes his arse and hollers like Hiawatha at the lip of the stage. The mic stand goes down, there’s a few Elvis shapes then a high kick. He’s having such a good time, he almost forgets the special guest.

Moya Brennan, the legendary voice of Clannad, joins the band onstage. First up, there's a suitably ethereal run at ‘She Moves Through The Fair’, in which she swaps verses with Ó Maonlaí over the evocative drone provided by Brunsden’s bowed bass. It is a beautiful song, achingly sung.

A harp is brought to the stage and the first plucked notes of ‘In A Lifetime’ – Moya's duet with Bono, recorded in this very location in 1985 – send shivers down the spine. Moya leads the melody out beautifully. In the free, poetic spirit of the night, Ó Maonlaí takes the song somewhere else again, almost fighting against Bono’s original vocal. It is, as Hothouse Flowers' guitarist Fiachna Ó Braonáin points out to Hot Press later, a difficult song to sing, but Ó Maonlaí makes it through superbly, the blend of his voice and Moya’s a thing of great power. It is a special, historic, once-in-a-lifetime moment. 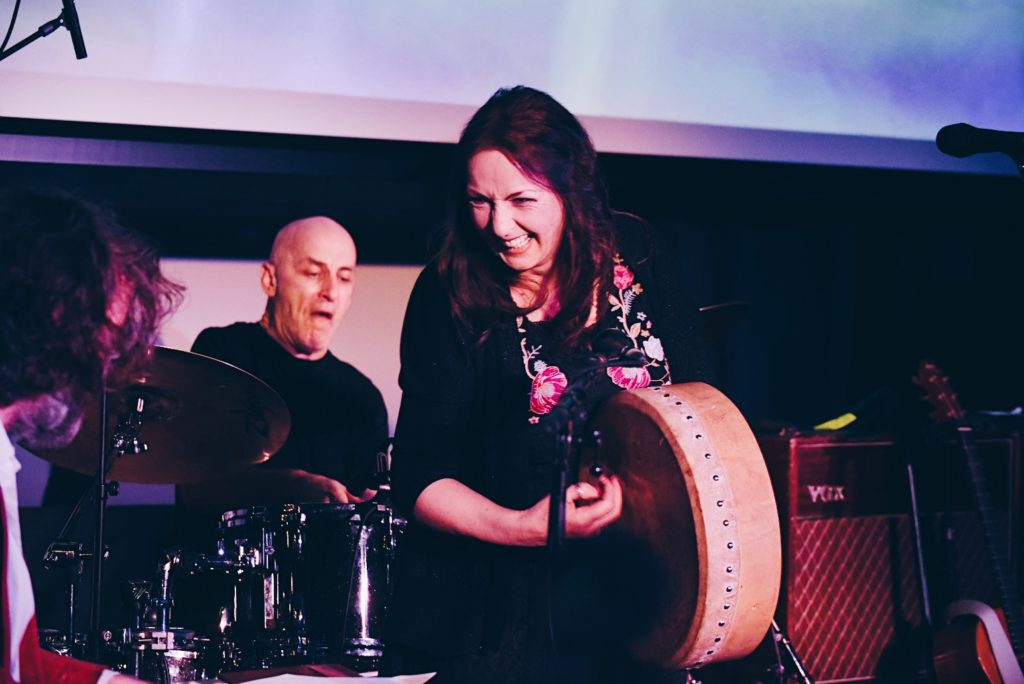 Hard to follow that you might say and it’s true, but the band hop, skip and jump into ‘Sí Do Mhamo Í’, with Brennan helping out on the Bodhrán. Fiachna gets the tin whistle out, Clarke heads off around the houses, the crowd whooping him on. Ó Braonáin goes googly-eyed as the band move into the ‘Banished Misfortune’ jig first and then finish out with the reels, ‘The Blackberry Blossom’ – currently to be found down the back of The Gloaming’s new album – and ‘The Salamanca’.

The great thing about Hothouse Flowers is that they never play the same show twice. They’re just not that kind of band. Liam Ó Maonlaí goes in whatever direction takes his fancy and, with an intuitive ability honed from decades together, his bandmates go with him. You can see it in Ó Braonáin’s eyes as he watches his pal at the keyboards: he has an idea what’s coming, but he might not be entirely sure when it’s going to arrive.

It makes for a thoroughly joyous and inspiring musical experience every time you’re lucky enough to see them – and Hothouse Flowers delivered on this occasion in extraordinary style. This hallowed location couldn’t have asked for more suitable opening testament. Windmill Live has landed. (PC)

Album Review: Strange Boy - 'HOLY / UNHOLY'
Music Industry In Ireland – Moya Brennan: "During the lockdown this year, it has been much harder to see the light at the end of the tunnel"
Rave On, Van Morrison: President Michael D. Higgins Joins 75 Irish musicians in Remarkable Celebration of Legendary Belfast Songwriter Curated by Hot Press