Frontlines: What are they doing to our trees?
The Hot Press Newsdesk

The government has committed to planting 22 million trees a year, as part of the Climate Change Plan unveiled earlier this year. So why are they allowing the aggressive felling and pruning of mature trees, all over Ireland? Report: Shamim Malekmian

Trees are generally destined for a long life. If they remain free from human interference, that is. They have a tendency to stand tall, even after their natural lifespan is over. In a new, recurring trend, however, trees in Ireland are being uprooted and damaged - often by what might be considered respectable institutions. Sidewalks are bidding farewell to their leafy friends. Some trees are also being aggressively trimmed, leaving them looking, bare and unstable.

Indeed, one of the main features of the proposed BusConnect plan for bus corridors in Dublin, also unveiled earlier this year, was an aggressive programme of tree-felling on the part of the National Transport Authority. While the original plan is being revised, a significant level of tree felling will still be necessary, if the NTA plan gets the go-ahead.

Now, Irish citizens are starting to shout stop. The increasing incidence of tree-felling has led to calls for the adoption of stricter tree preservation policies here. Already an online petition calling for the protection of Irish trees has garnered nearly 18,000 signatures. That number is likely to rise significantly as awareness spreads.

The issue also spilled over into the public domain in April, when a third-level education institution in Cork city was accused of removing trees from valuable parkland on its property. On Twitter, Green Party Councillor Oliver Moran accused Griffith College, Cork of turning "designated landscape" into a "dead zone." Various animals, Moran said, used to live on the now cleared land. Not any more. Some Twitter users weighed in to suggest that the college was setting a bad example for its students.

In response, a statement issued by Griffith College said that local residents had been consulted about the decision. They also insisted that complaints about "anti-social behaviour" on the property had been a factor in their decision. This was disputed by resident Cathal O'Shea. He insisted that people in neighbouring estates were invited only to take a "tour" of the campus grounds. There was no substance, he insisted, to the suggestion that they had played a part in the tree-felling decision.

However, Griffith College is not the only third-level institution in the country to have removed trees from its property recently. Only a month after the private Cork college's tree-cutting news grabbed the headlines, it was revealed that two of Dublin's major colleges had engaged in similar activities. Both University College Dublin (UCD) and Trinity College Dublin (TCD) removed trees and vegetation from their properties, according to reports. The accusation has been made that these clearances took place during the bird-nesting season.

So were these clearances illegal? The Wildlife (Amendment) Act 2000 prohibits cutting, burning or destruction of vegetation during nesting season for birds and wildlife, which runs from 1st March to 31st August - although local authorities are exempt from this, where the interests of public health and safety are involved. Under the Act, the intentional desertion of eggs or nests - or even distressing a bird near a nest that contains eggs or baby birds - is considered an offence. While that law may be more honoured in the breach than the observance, it is not entirely neglected: in May of this year, two men in Co Laois were found guilty of contravening the Wildlife Act, by engaging in hedgerow destruction during the nesting season. 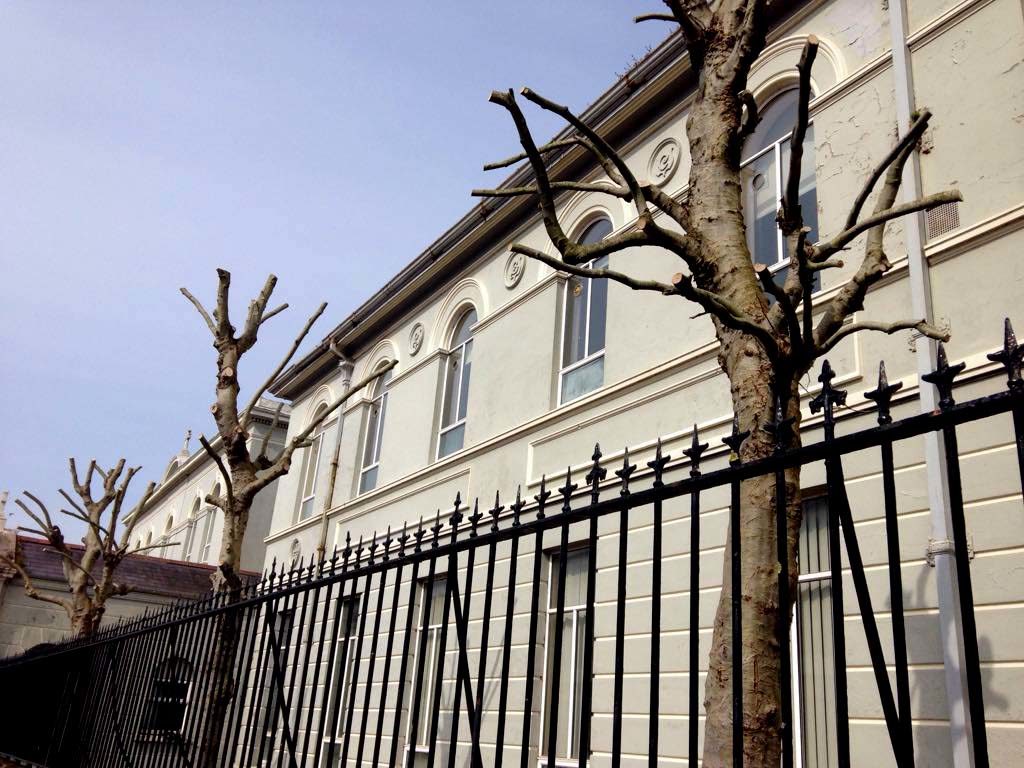 Meanwhile, Green Party MEP Grace O'Sullivan has highlighted a different manifestation of the same problem. In a newly destructive wave, trees are being trimmed crudely, leaving them looking mutilated and unappealing. Whether this is being done deliberately or not is uncertain, but the net effect is that the beauty of the trees is being hopelessly compromised.

Hot Press has also documented incidences of improper and aggressive trimming of trees across Cork city. So what is behind it all?

Dr Eoin Lettice is a plant scientist at University College Cork's (UCC) School of Biological and Environmental Sciences (BEES). Dr Lettice, whose tiny office overlooks a green area with a cornucopia of fresh vegetation, says some people become "nervous" about the presence of big trees on their private properties. In the absence of meaningful tree preservation guidelines, they can freely cut them down.

"You often hear people saying, 'Oh this tree is too big, we should cut it down, or it should be reduced in size,'" he says. "The reality is that many people are nervous about big trees, when in fact after you cut them down and manage them poorly, they'd be more at risk than when you let them be."

When discussing the new trend of trimming trees in an improper way Dr Lettice sounds a note of alarm.

"Trees have evolved to stay upright and not to lose limbs and so on," he explains. "So, when large limbs are cut off them, what happens is that they grow these kind of large 'water shoots'. You can see that with trees around Cork. I think a lot of people are cutting down trees to make their life easier, in terms of access and so on."

Water shoots (or sprouts) are buds that develop on the trunk of a tree that has been chopped. They begin to form branches, giving the tree a different, very unnatural appearance.

"When we cut a tree's limb, any new branch that grows won't be as robust as the original one and it will almost invariably be weakly attached to the tree itself. So as these new limbs start getting bigger, they become more vulnerable to damage in wind or storm conditions. Not everyone who is willing to climb a tree to cut down a limb is a tree surgeon or an arborist." 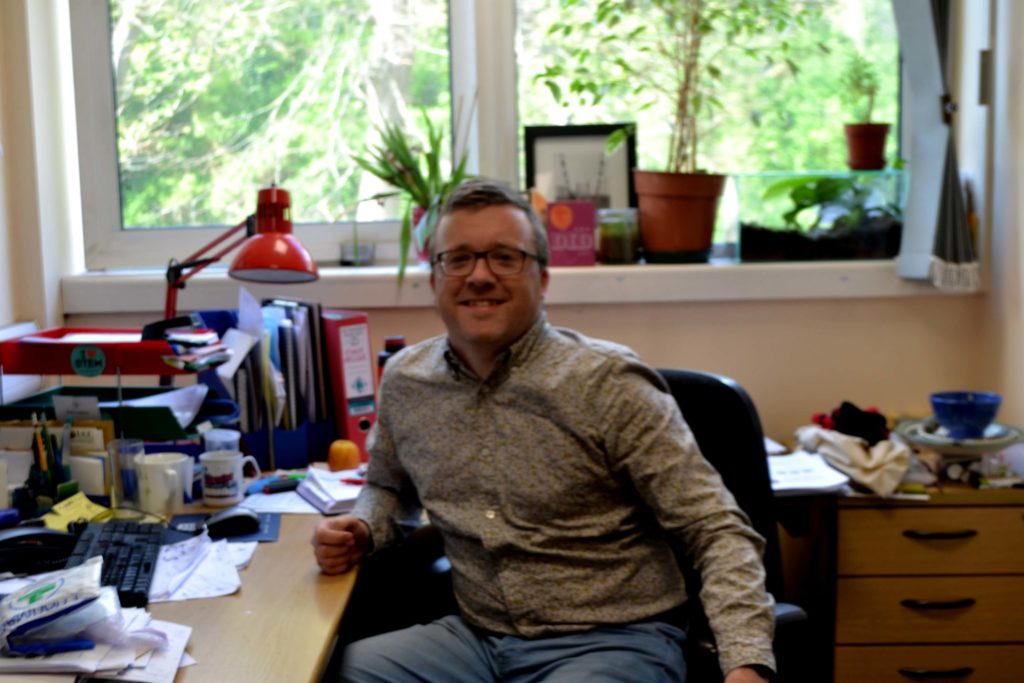 The ESB, meanwhile, frequently cut tall trees that grow under or close to power lines. Dr Lettice insists that this should not be allowed.

"We often see very strangely-shaped trees that have been cut down to keep them away from a power line," he says. "Somebody said to me recently, 'At least they didn't cut down the tree completely'. I suppose that's one argument, but I think you end up with these trees that are going to require way more expensive management in the long-run." Dr Lettice argues that all local councils should adopt a comprehensive, and strict, tree preservation policy. He believes that trees should remain intact unless "they are clearly dangerous and a risk to the public - or if they've come to the end of their natural life."

Science has long identified the importance of trees in combating climate change. Trees absorb carbon dioxide - the main cause of greenhouse gases - and use it for growth. The carbon is converted into sugar and wood, before pure oxygen is released back into the atmosphere.

With this in mind, as part of the national Climate Action Plan, the government has promised an intensive tree-planting campaign, which will see 22 million trees being planted annually. However, it is now widely agreed that - while tree-planting is a very good thing indeed - leaving older and middle-aged forests and trees intact is even more important because of their superior carbon-sequestration capabilities.

William Moonlaw is the author of five reports from the U.S. Intergovernmental Panel on Climate Change.

"One paper found, in multi-aged forests around the world of all types, that half of the carbon is stored in the largest one-percent diameter trees," he said, in a paper published by Yale Environment 360.

It is an astonishing figure.

"I realised," he added, "that the most effective thing that we can do is to allow trees that are already planted, that are already growing, to continue growing to reach their ecological potential, to store carbon, and develop a forest that has its full complement of environmental services."

Trees are considered to be our planet's "water filters". Through a process called phytoremediation, they soak up toxins and wastes - including explosives and organic debris - from the atmosphere, thanks to a large community of microbes located around their roots.

This is no small matter. A 2008 study, conducted by scientists at Columbia University found a correlation between the concentration of trees and lower rates of asthma in urban neighbourhoods. In a similar vein, a Japanese practice known as "forest bathing" also advices taking to the forest to wash the body clean of its toxins as well as reducing stress levels.

So, in virtually every way, trees are good. The campaign to protect them from arbitrary attack by humans is only starting. It is chastening to think that the future of our planet may well depend on it being successful.

The Hog: "We need to recognise and respond rapidly to changing economic and geopolitical realities"
Eamon Ryan: "We negotiated seriously with Sinn Féin going into this government, but it just didn’t happen"
The Hog: Why Are We Still Running Up That Hill?

10 Reasons To Be Cheerful About Ireland's Sustainability
The Whole Hog: Its Time To Reboot The Climate Campaign
Mad Hatter Q&A - Edel Coffey: "If I ever got to cast my novel Breaking Point for the big screen, Ruth Negga would be my dream actor"
The Whole Hog: The 10 Big Issues We’ll Wrestle With In 2022
KNEECAP: "The only thing to do is take the piss – because if you don’t laugh, you’d be crying your eyes out"
Student Special: Go Your Own Way – "Keep your options open. Not every decision is final"