Against all odds, in 1920s Alaska, a pack of huskies delivered a vaccine consignment to the local community in Nome. It was a remarkable saga that changed the way people looked at medical innovation.

What’s surprised me most about the Covid pandemic is that people I thought were well-sussed dudes turn out to be tin-foil hatters.

I remember coming home from school one day long ago to find about 20 people clustered in silence outside Meenan’s, two doors up from us. Christina had died. She was about 13, black hair in ringlets down to her shoulders. Her death didn’t come as a total surprise. We all knew she was sick with diphtheria.

You don’t hear much about diphtheria these days. Few will have a memory of it haunting their home. But we knew all about it back then, or thought that we did, and it was terrifying. Every now and again, you’d hear in a hush that some local boy or girl had caught diphtheria and died. Parents said prayers to keep diphtheria away.

A vaccine invented in the 1880s was gradually to beat the disease down. By the beginning of this century diphtheria had for practical purposes been eliminated. But it hadn’t been smooth progression everywhere.

In 1924, Curtis Welch, 28, the only doctor in the small town of Nome in Alaska, population 2,000, two degrees south of the Arctic Circle, maximum winter temperature well below zero, noticed the beginning of a trickle of deaths from diphtheria. The town was totally isolated. Welch knew that calamity was almost upon them. Three Inuit children were dead, other children were sickening. The need for the vaccine was desperate, and desperately urgent.

But the dome of the sky was solid with ice. Airplanes were grounded. The nearest rail-head to Nome was at Nenana, 674 miles away. The only way in or out was by dog-sled, which would take 20 to 25 days, which they definitely didn’t have.

A consignment of the vaccine was put on a train at Anchorage and carried express to Nenana, to be picked up by musher Leonhard Seppala with a 20-strong pack, his lead husky Togo out front. They set off with a parcel of units of the vaccine wrapped in layers of bearskin, racing across the frozen wilderness, blinded by blizzard, putting all their trust in their dogs driving across the endless ice, climbing 5,000 feet to cross McKinley Mountain, descending to the tiny settlement of Golovin where Seppala passed the vaccine to Gunnar Kaasen, whose lead dog Balto guided the pack on the last miles home to Nome. Travelling non-stop, the mushers and dogs had made it in five and a half days. All arrived more dead than alive. They saved the town. It would be underselling their achievement to describe it as epic.

Radio was in its infancy as a means of mass communication. The story, perfectly set up for romantic sensation, was the top item and carried in tones of high excitement on every station in North America and beyond. The coverage gave a huge boost to awareness of the vaccine, stilled doubts as to the safety and efficacy of vaccines in general, changed the way we, or most of us anyway, look at medical innovation.

The publicity spurred the first massive inoculation campaign, in the US and then in the wider world, beginning the dramatic reduction in the threat of diphtheria which in our own time has culminated in the liberation of humanity from another lethal menace.

A statue of Balto was commissioned by the city council of New York from Frederick Roth, one of the most celebrated US artists of the era. Balto was brought to New York for the unveiling.

In 2011, Togo was named by Time magazine as “Most heroic animal in American history”.

Another thing about Nome is that it was the settling for the 1960 adventure movie North To Alaska, directed by Henry Hathaway and starring Stewart Granger, John Wayne, Capucine, Ernie Kovacs and Fabian.

The film evokes Nome in its short heyday, during the Alaskan gold rush of 1890s when its population rocketed from around a thousand to 25,000 in a single summer, a wild melee of fortune-hunters converging in chaos with glittering eyes. But whatever gold was in the ground was gouged out within a couple of years. The influx was reversed as rapidly as it had arisen, leaving Nome a scattering of derelict shacks.

It was to be a quarter of a century before Nome returned to the world’s attention. The saga of Togo and Balto made the town a minor tourist attraction. The more recent fashion for adventure holidays has further boosted its fortunes.

The theme-song from the movie has become the town’s anthem. “I’ll build for my lover/A honeymoon home/Below the old white mountain/Just a little southeast of Nome/Where the river is winding/Big nuggets they’re finding/North to Alaska/We’re goin’ north, the rush is on.”

Well worth a listen. Think about Togo and Balto as you do.

Balto’s statue stands today on the main path leading to the Children’s Zoo in Central Park in New York.

He is a miracle dog, made of solid stone but capable of pissing on any anti-vaxxer who dawdles within range of his plinth. 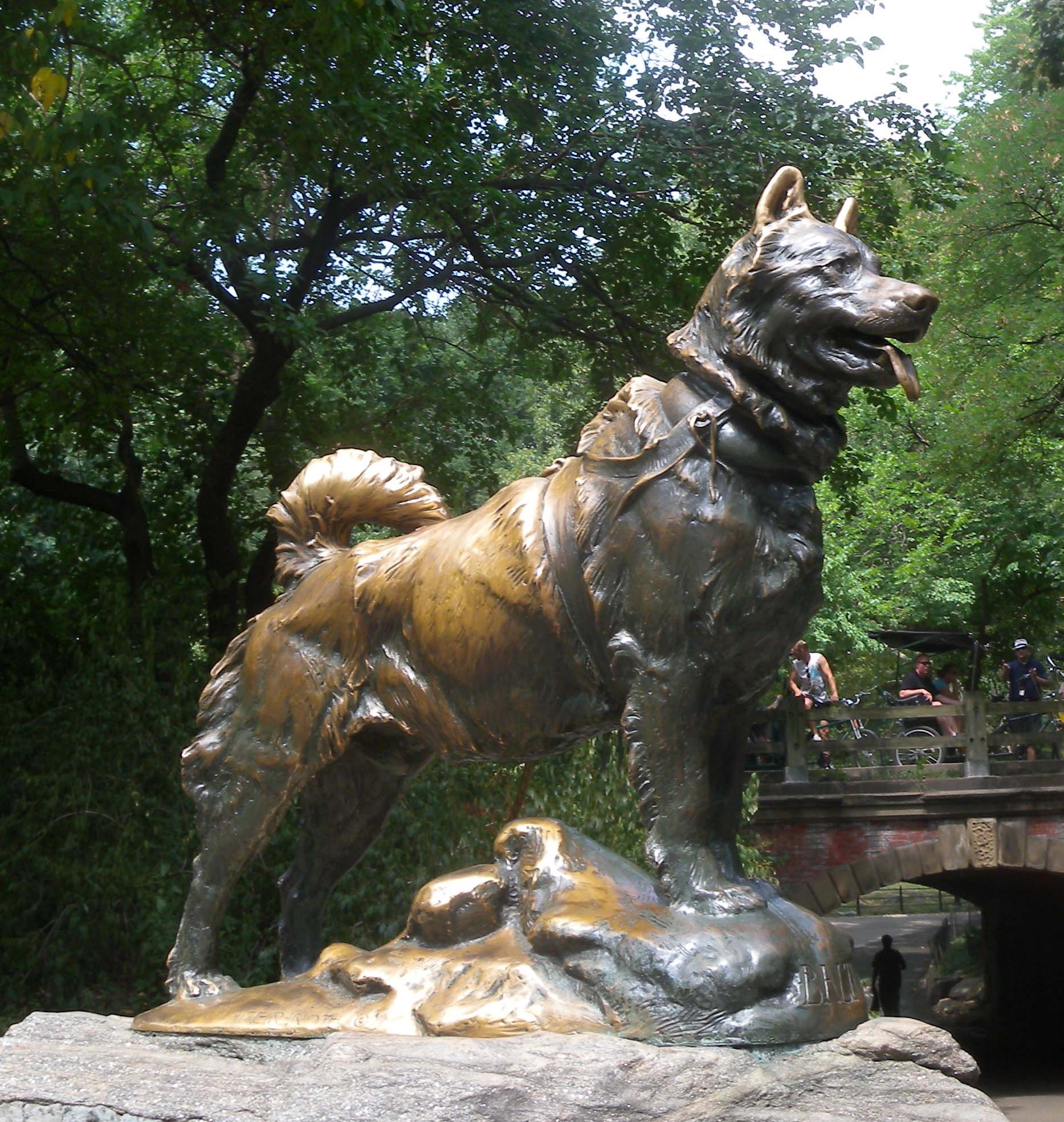