I like a literary chin-stroker as much as the next woman or man and I've spent time with Banville brow-furrowers, especially The Frames Trilogy which began with the brilliant Booker-nodded Book Of Evidence in 1989, continued with 1993's Ghosts, and concluded with Athena in 1995. Like most people though, I keep those on the shelf so I can casually drop an old "Oh, Banville? Yes, I've read him" at my many fabulous showbiz soirees, while really preferring to have a thriller in my hand, simply because they're more fun. Mind you, Athena had a serial killer, so six of one...

Banville himself has said that he began writing his Quirke - the fifties set Irish State Pathologist with an eye for the ladies, a taste for the drink, and a nose for crime - books under the pseudonym Benjamin Black to let readers know that they weren’t taking on “elaborate literary efforts”. Like 2020's Snow, featuring Detective Inspector St. John Stafford, who turns up here too, April In Spain is published under his own name, Banville claiming to have shut Black “in a room with a pistol, a phial of sleeping pills and a bottle of Scotch, and that was the end of him” perhaps because the author has come to realise what the fans already know; that these books are as worthy of praise and attention as anything he produces when he has his serious and Nobel whispered-about hat on. There isn't an iota of dumbing down going on here, no matter how much pseuds like me might secretly welcome it.

Quirke is, against his better judgment, on a Spanish holiday with his Austrian psychiatrist wife, Evelyn. He’s doing his best to be down beat, despite the setting and her loving presence, he can’t really manage it. Is it any wonder glorious sourpuss Gabriel Byrne played the part on the telly? He's even managed to get the boozing under some semblance of control too. A chance encounter after ballsing up his hand opening an oyster raises ghosts from a previous case. Could that doctor really be April Latimer, the friend of his daughter Phoebe who vanished amid a family scandal five years back and has been given up for dead since? Without giving too much away, there is, as usual with Banville/Black, an Irish political connection but you can get into that yourself when you pick this book up, as you most certainly should. 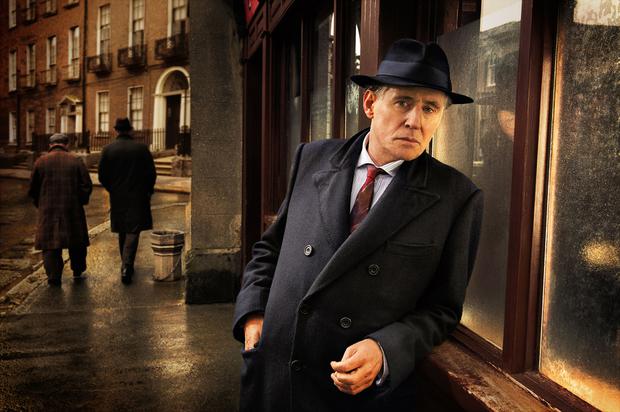 Quirke, as portrayed by Gabriel 'The Grin' Byrne.

Running parallel to all this is Terry's story. An Irish-born, London-based gun for hire who honed his skills in World War II Burma, he's arrived back in Dublin after dispatching his latest victim. His blood is a cold as a bedsit and his thought-process is laid out with a master's touch. Will these two strands converge? You've probably already guessed that they will, which is where Detective Inspector Stafford comes in.

The sun in Spain and the rain outside the pubs of Dublin are both perfectly captured, as is the nodding and back-scratching of the political arena, and it's all accomplished within a plot that rattles along good-oh. It can't be long now until that jury in Sweden get their act together, and it won't be a hoax call this time.

April In Spain is out now in paperback from Faber Books