Bloody Sunday 1972: Why Was Michael Jackson Exonerated In The Saville Report?
Eamonn McCann

When the Saville Report was issued ten years ago, it was hailed as a vital step on the road to reconciliation. The truth is that it glossed over the year evidence of an extraordinary cover-up, perpetrated by the man who became the Chief of the General Staff in the British Army, Michael Jackson – which was supported, all the way to the top, by the British establishment at the time.

Last Tuesday, June 15, was the 10th anniversary of publication of the report of the Bloody Sunday Inquiry under Mark (Lord) Saville. Saville’s verdict was announced in the Commons by Prime Minister David Cameron. All of the victims had been unarmed and innocent. The shooting had been “unjustified and unjustifiable.”

Thousands had gathered in Guildhall Square to watch the live feed from the Commons on a giant screen. The phrase “unjustified and unjustifiable” triggered a thunderclap of joy, the Square transformed into a sea of shining faces.

This was the vindication we had trekked towards for decades. It felt sufficient unto the day.

The report ran to 5,000 pages. It took me days to read it. I had missed only a dozen of the 444 days of oral evidence. Some of the report’s detail now sat uncomfortably with my memory. Saville pointed the finger of blame at 10 rank and file soldiers and one allegedly undisciplined officer. The top brass and the politicians were, without exception, given a clean bill of health. This wasn’t right.

There was virtually no analysis of the report in British or Irish mainstream media. This was the sort of good news story they craved from the North. No mainstream local party voiced unease. The British Government had at last done right by the Bloody Sunday families. To make difficulties now was to be “an enemy of reconciliation.” The first few articles I wrote in Hot Press, and in other publications, challenging Saville’s findings were given a dusty reception in Derry.

“Reconciliation” is a slippery concept. The word is deployed in every plea to “both sides” to shake hands and call it quits. But “both sides” weren’t involved in Bloody Sunday. The murder spree around Rossville Street hadn’t been perpetrated by a paramilitary gang purporting to represent one community in inflicting suffering on the other. It hadn’t been done by furtive bomb, or ambush on a lonely road or through an eruption of death into a crowded pub but on open ground in bright, crisp winter sunshine by men uniformed to represent the British State.

Bloody Sunday didn’t fit into the approved narrative of Catholics and Protestants at daggers drawn for decades while the British Army strove to keep the peace. Getting the slaughter off the agenda was a high priority for London and Dublin governments as they pursed the peace process and “reconciliation.” Every Nationalist party in Ireland, Sinn Fein and the SDLP most enthusiastically, went along with this approach.

Cameron couldn’t have used the phrase “unjustified and unjustifiable” if those indicted by Saville for involvement in the killings had included, for example, Michael Jackson, second in command of the paratroopers on the day, who had since risen through the ranks to become boss of the Parachute Regiment, commander of the British Army on the Rhine, NATO chief in Kosovo, then Chief of the General Staff – Britain’s top soldier.

NO EXPLANATION TO OFFER

The Jackson affair is not the only example of the political dishonesty surrounding Saville’s Inquiry. But is one of the most telling, and most damning.

Michael Jackson had been in Rossville Street as second-in-command of the soldiers throughout the 17 minutes of shooting. Testifying to Saville in April 2003, he claimed not to have seen any of the shooting. Nor did he mention having compiled the list of the shots which had been fired and which was to be used by British political and military spokespersons around the world to explain the slaughter.

Major Ted Loden, commander of Support Company, members of which had fired all the shots which killed 14 and wounded 14 others, told Saville that shortly after the killing ended, he had taken down in his own hand statements from each of the shooters, plotted map references showing the locations of the shooters and of their targets and had recorded the soldiers’ accounts of why they had fired. He provided a vivid account of interviewing the soldiers one by one, as he sat in the back of an armoured vehicle a few hundred yards from Rossville Street as darkness descended with a map spread out on his lap, writing by the light of a battery-powered lamp.

Loden was handed a type-written document detailing the shots. He agreed that this seemed to be a type-written version of his hand-written account. The Inquiry then produced the handwritten original. Loden looked at the document and said that while the wording was his, the handwriting wasn’t. Whose was it, then, he was asked? It might be General Jackson’s, Loden suggested.

But why would Jackson have painstakingly transcribed his notes more or less immediately after he had written them down? Loden pondered the question for perhaps 20 seconds, then replied: “Well, I cannot answer that question.”

Jackson, recalled to the witness-box, confirmed that the handwriting was his.

Cross-examination revealed that none of the shots described in Jackson’s list conformed to any of the shots which had actually been fired. Some of the trajectories recorded showed bullets passing through brick buildings before finding their targets. None of the locations where uncontested evidence showed the victims had fallen was recorded as such in the map references. It wasn’t that the list contained inaccuracies: from start to finish, it was wrong in every detail.

Jackson had no explanation to offer for any of this. He claimed that he had entirely forgotten having produced the documents when first giving evidence but had now recovered a “vague memory.” On more than 20 occasions, he used phrases along the lines, “I cannot remember,” “I do not recall,” “I am afraid I cannot help you there.”

In his report, Saville accepted both Loden’s original claim that he had written out the shot-list and Jackson’s evidence that he must have copied Loden’s script verbatim – although Saville could offer no explanation how or why this might have come about. Who had asked or ordered Jackson to transcribe the shot-list? To whom had he submitted it? What was his understanding of how it was proposed to use it? Again, Jackson’s memory failed him. “The requirement may have been instigated in London, but that is pure speculation on my part.”

It was not put to Jackson that an alternative explanation for this witch’s brew of mendacity might be that a false account of events was urgently needed and that he had been spotted by his superiors as just the man to produce it. 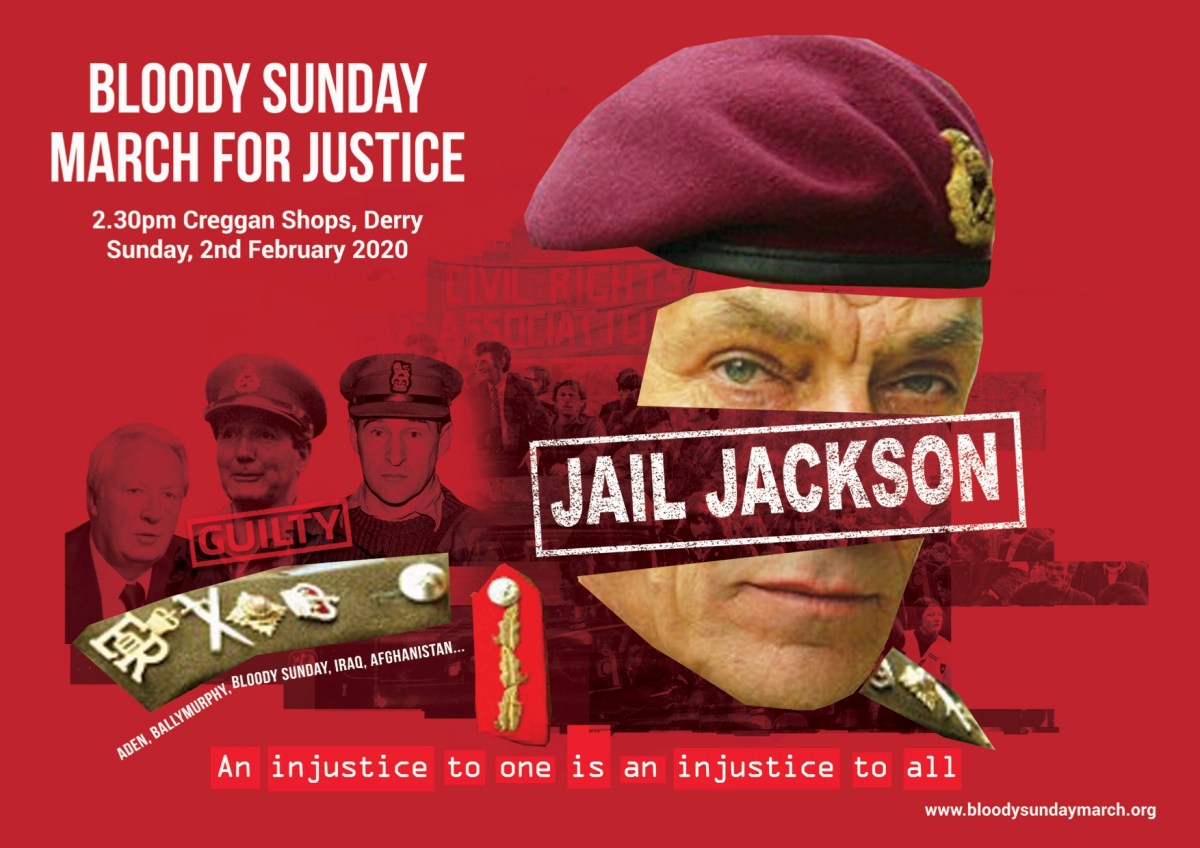 Also in his report, Saville rejected suggestions that “the list played some part in a cover-up to conceal the emerging truth” and went on: “The list did play a role in the Army’s explanations of what occurred on the day.” He cited a report on BBC radio at one am on the day after Bloody Sunday which used the list to explain the “shooting engagements”.

He reported that, “Information from the list was used by Lord Balniel, the Minister of State for Defence, in the House of Commons on 1st February 1972, when he defended the actions of the soldiers.” Saville also referred to evidence that the shot-list had been distributed to British diplomatic missions around the world as a guide to answering questions on the killings. This was not just evidence of a criminal conspiracy to conceal the truth, but a practical account of the conspiracy in action, with Jackson at its heart.

If Saville had gone where the evidence ought to have led him and reported that the man then at the apex of Britain’s armed forces had concocted lies to cover up unjustified and unjustifiable killing and then perjured himself, winning cheers in Derry while simultaneously bringing smiles of relief to the leaders of the perpetrators of the slaughter, the response in Derry 10 years ago might have been different and the political impact very different indeed.

He would not have been able to denounce the soldiers who had pulled the triggers while maintaining that the reputation of the British army itself remained unsullied.

The continuing Bloody Sunday cover-up illustrates the British ruling class’s cynicism, dishonesty and kill-crazy carelessness when dealing with the discontents of the lower orders.

The fact that so many politicians and commentators in Ireland swallowed Saville’s version of events testifies to their anxiety to put Bloody Sunday behind them and get on with the business of reconciliation with the British ruling class and avoiding the awkward truth.

A handful of squaddies has been put in the frame for the massacre. But nobody who matters to people who matter. Saville didn’t tell the truth. At least not the whole truth.

Almost fifty years after the blizzard of death in the Bogside, the road to the truth of Bloody Sunday still stretches ahead.

But we will get there.

Michael Jackson Should Be Held Responsible for The Murder of Innocent Civilians in Ballymurphy
A British Agent Was Involved In Organising Derry’s Bloody Sunday March
Album Review: Niall McCabe, Rituals