Ye Vagabonds: "You don’t have to be born here, or speak the Irish language, to feel a connection with traditional music"
Ye Vagabonds. Copyright Miguel Ruiz.

As they return with their third album, Nine Waves, Ye Vagabonds reflect on the “inherently non-hierarchical” nature of folk music, the scene’s anarchist ties in Dublin, refugee solidarity, and their deep connection to Arranmore Island.

When I meet Ye Vagabonds in their rehearsal space at The Fumbally Stables in Dublin 8, they’re in the middle of important business – sorting through hand-printed cards to send to fans, emblazoned with a small bird that, after a public vote, they’ve affectionately named Wrenya. “It was between that and Wrenard Cohen,” I’m told.

It’s indicative of the thorough DIY ethos that continues to underpin the current Irish music scene, and the folk community in particular. Of course, repeatedly sticking tiny cards into envelopes while holed up in their peaceful oasis in The Liberties has also been a handy way of keeping the looming “anxiety dreams” at bay, the brothers admit, in the run-up to the release of their third album, Nine Waves.

Not that those release-related worries are warranted. Issued via Rough Trade’s River Lea imprint, Nine Waves further establishes the duo as one of the most quietly authoritative forces in Irish music, as they continue to expand their sound across a compelling collection of both traditional and original tracks.

As well as being familiar faces at sessions in Walsh’s in Stoneybatter and The Cobblestone in Smithfield, Ye Vagabonds have found a hugely receptive fanbase outside the trad strongholds too – with Hozier having previously shared his appreciation for the pair with his couple-of-million Instagram followers.

But despite having the honour of being the RTÉ Radio One Folk Awards’ most decorated act since its inception in 2018, the brothers have always been wary of how their approach to folk and traditional music could be misinterpreted. Featuring a selection of original tracks on their 2017 self-titled debut LP was “a conscious decision,” one half of the duo, Diarmuid Mac Gloinn explains – motivated by fears of “being pigeonholed too early on as just a trad outfit.”

“We’re well aware that there’s a huge corporate machine out there that’s hungry for green stuff,” his brother Brían grins. “So we wanted to make that album first, and then lead into the album of traditional songs [2019’s The Hare’s Lament]. And also strip back those traditional songs, and make them just a little bit too minimal, so there’s no way that people can use them to sell pints!”

The new album, Brían says, is “a completely different beast altogether”, which was penned during lockdown, when they were living apart.

“I had a load of ideas, and bits of melodies, and a couple of fragments of lyrics that had been floating around for years, which I hadn’t really had time to work on before,” Diarmuid recalls. “And then I suddenly had nothing but time. Some of it was like a self-soothing exercise – like an escape from the one room.”

As well as forcing them to look inwards for inspiration, the pandemic also provided an opportunity to stop and take stock.

“I really enjoyed the lack of touring, and being at home,” says Brían, who’s based in Co. Wicklow. “Since we started playing music, we’ve just been gigging all the time, and travelling all the time. So it was brilliant to have those chances to sit and write. It definitely changed the album that this turned into.” 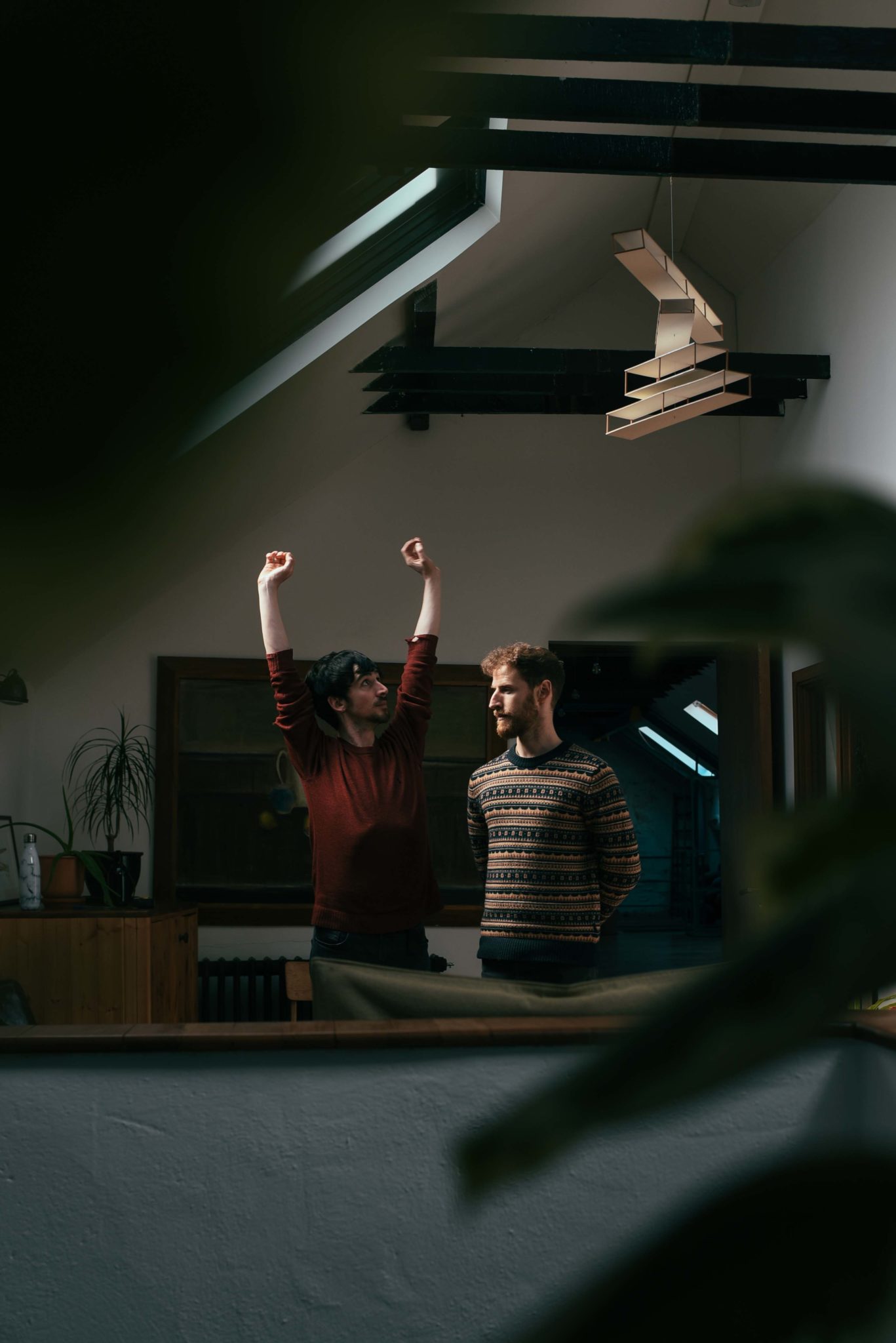 After this intense creative period, Nine Waves was recorded in late 2021, with John ‘Spud’ Murphy – who’s established himself as one of the most boundary-pushing and in-demand producers in the country, through his work with the likes of Lankum, black midi and caroline.

“It quickly became very obvious that we spoke the same language,” Brían says of working with Spud. “He’s just a lovely dude. He has amazing ears and ideas, and he took ownership of the album himself, in a way that was lovely. He was really putting himself into it. And he makes a really good cup of tea…”

“He also has a Kilkenny accent and we grew up in Carlow, so it made us feel a little bit closer to home!” Diarmuid laughs. “Everyone who was working on this album with us, between Spud and the other musicians, we all knew we could trust each other, so we could give people a lot of freedom. There were a couple of takes where we were like, ‘Okay, really go crazy for this one! Animal noises, everything! Just let it all out there.’ Some amazing stuff came from that.”

While their previous album featured traditional songs they had inherited from Arranmore Island in Co. Donegal, where their family originally hails from, Nine Waves finds Ye Vagabonds leaning ever closer into that setting as a source of inspiration.

“The island is a huge character in the album, for sure,” Brían nods. “There’s a real oceanic theme, and there’s characters from the island in there. I was living up in Arranmore in the later half of 2020, and you can’t not get drawn into the sea up there.”

Their roots on Arranmore go deep – with their great-grandmother once serving as the main information source for the island’s genealogy. Although Diarmuid and Brían were raised in Carlow, their parents returned to the island permanently a few years ago.

“Up the hill from where they’re living now, is the place where our great-granddad was born,” Brían tells me. “It’s just a ruin – a bunch of stones on the ground. We go on walks with our nieces there now, and they’re at least the fifth generation to grow up on that hill.”

Over lockdown, Brían worked on a radio documentary, The Ballad Of The Stolwijk Rescue, which was broadcast on RTÉ Lyric FM in September 2020, and tells the story of a dramatic sea rescue that took place off the coast of Arranmore in 1940, when eight fishermen from the island rescued 18 Dutch sailors from a wreck in hurricane-force winds.

As he notes, “tragedies at sea are in the island community’s genetic memory” – something which has influenced Ye Vagabonds’ own interest in supporting the Irish charity Refugee Rescue, which offers skilled emergency assistance to migrants in distress in the Mediterranean Sea.

“The donations go towards running and repairing their boat, Mo Chara, which is pulling people out of danger so it’s incredibly direct,” Brían elaborates. “It’s something we’ve been interested in for a long time. We’ve played refugee solidarity events and stuff, which is where Diarmuid met his wife.

“And now is a really good time to look at how refugees should be treated,” he continues. “This situation with Ukraine is an amazing example of the Irish people responding so unbelievably. My girlfriend’s parents have a family living with them in their house. It’s amazing. It sets a really good precedent for how people should empathise with and help out during any refugee crisis.”

“Long may it last,” Diarmuid nods. “And hopefully it will be extended beyond Ukraine as well.”

“We had already been supporting Refugee Rescue, but now it’s really important – because there’s still an ongoing refugee crisis there, and they’re also fleeing war and violence,” Brían resumes.

While they’re clearly not afraid to use their platform to support the causes that are important to them, Ye Vagabonds are slow to include explicitly political statements in their music – as they’re well aware that “Irish people have very keen bullshit monitors and bollix-o-meters…”

That being said, there’s a clear overlap between their generation’s embrace of Irish folk music, and a disdain towards the establishment – a convergence that was on defiant display last year, during the protests against plans to build a hotel around Dublin’s iconic traditional Irish music pub, The Cobblestone. 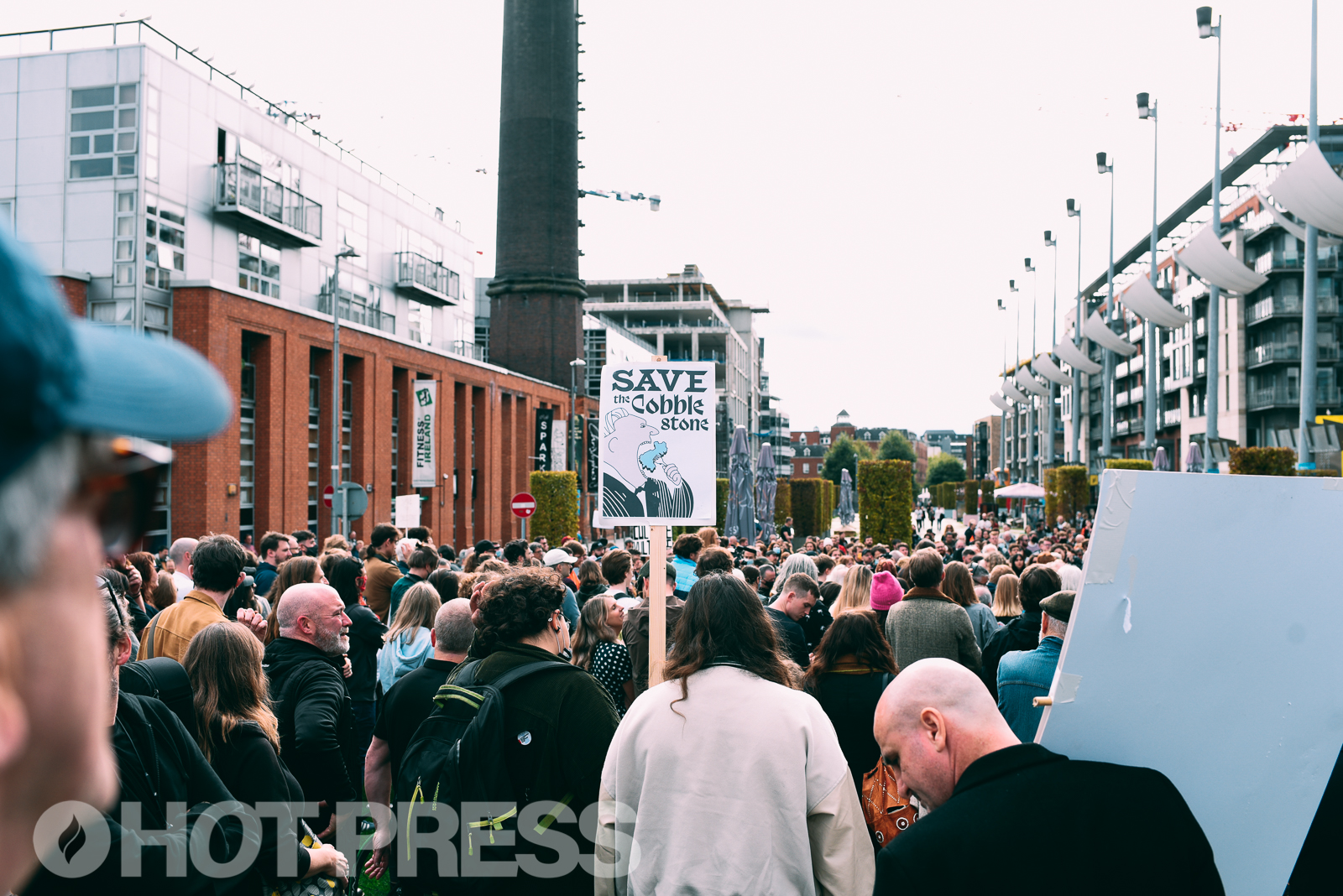 “There was a huge anarchist community in Dublin when we started living here,” Brían reflects. “We made a lot of friends in that community, with people squatting, and we used to hang out in places like Grangegorman a lot. Those spaces were inherently political. That definitely had a ripple effect on the music community in Dublin, because it crossed over with the traditional music community.”

“There’s a lifestyle you see everywhere,” Diarmuid muses. “It’s globalist, capitalist, and very corporatised – and it doesn’t relate to my life personally, even if I see it everyday. If you don’t subscribe to that lifestyle, you still need something to subscribe to.

“And as Ireland has become more multinational, people have had to come up against the question: ‘If Ireland isn’t what it used to be, what is it now? How do we define ourselves?’” he continues. “So people are looking for things to connect with. And if you want a sense of connection with something that pre-dates the system – and is a bit outside of the system – there’s plenty of stuff here. You don’t have to be born here, or speak the Irish language, to feel a connection with traditional music.”

As the brothers note, folk music still serves as an empowering, accessible and “inherently democratic” force.

“Some kinds of music are inherently hierarchical – in that one person is on the stage, and they’re the ones singing,” Brían says. “They’ve got a band that’s overpowering the sound of the room. That’s the opposite of our approach. The way we’ve figured out how to play gigs uses less and less microphones – so we hear the room, and the people in it, if they’re singing. We try to make it as communal as possible, and minimise the barriers between us and them.

“Everybody that can speak can sing a song, if they want to enough,” he continues. “And you’re as likely to meet the biggest star – like Christy Moore or Dónal Lunny – just hanging around at a singing session. I don’t know if that would necessarily happen with big stars of pop music in Ireland.”

With that solid grounding, Ye Vagabonds now find themselves “heading into the next few years with more intention” than ever.

“Just being locked down, and having everything wiped off our plans actually made it easier to sit back and think, ‘What do we actually want to be doing?’” Brían resumes. “So who knows – maybe we won’t tour for 200 days a year, like we used to!”