The metal gods are set to play Dublin's 3Arena next year.

The notorious rock n roll comedy duo, comprised of Jack Black and Kyle Gass, Tenacious D is slated to gig in Dublin next year on February 10th, 2020 at 3Arena. The show comes as part of their Post-Apocalypto tour, which finds them playing gigs around the world. Tickets are priced at €49.50 and will go on sale Friday, November 15th via Ticketmaster.

Tenacious D's self-titled album was released in the fall of 2001 via Epic Records and was quickly certified at gold-selling status, and has since been certified platinum. The duo then completed their first feature film together -Tenacious D in the Pick of Destiny - for New Line Cinema, which was released in November 2006. The movie solidified the duo as legends and has gone on to reach cult-classic status. The album Rize of the Fenix followed in 2012, receiving a Grammy nomination for Best Comedy Album.

Don't miss your chance to see the iconic group when they pass through! 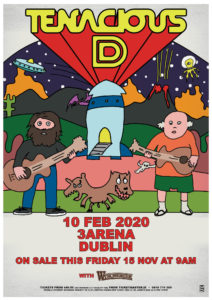 Harry Fennell to play the Hot Press Lockdown Sessions' Y&E Series tonight
PREMIERE: Galway rapper KY shares video for new single 'Foreign'
Jafaris unveils new single 'Haunted'
Over 500 live events workers gather in solidarity at Belfast's Custom House Square
Justin Bieber, Chance The Rapper and Run The Jewels dominate the Official Irish Charts
On this day in 1980: Led Zeppelin drummer John Bonham died, aged 32
We use cookies to ensure you get the best experience on our web site - by using this web site you consent to our use of cookies. Read more »