Slowthai: "It’s like you’re just a dancing monkey. They’re like, 'Give him a microphone and let him dance'."
Lucy O'Toole

After finding himself at the centre of considerable controversy last year, Slowthai is back with TYRON – the highly anticipated follow-up to his Mercury-nominated debut, Nothing Great About Britain. The Northampton rapper opens up about ‘cancel culture’, outgrowing his demons, and touring hijinks with Kojaque and Luka Palm.

The last time I saw Slowthai in the flesh, he was fearlessly strutting around a stage at Longitude in just a skimpy pair of personalised boxers and a Garda hat – having spent most of his performance inciting mosh pits, and crawling over stage equipment and barriers like a tattooed Gollum. It was July 2019, and the Northampton rapper’s star power was on a remarkably rapid upward trajectory, following the release of his Mercury-nominated debut, Nothing Great About Britain.

His aura is considerably mellower over Zoom, a year-and-a-half later. Although his plucky, almost naive charm has gone nowhere, it’s a far cry from the wild, outspoken hooliganism that once dominated headlines. Of course, change is brought about by pressure and time – two commodities that Slowthai (born Tyron Kaymone Frampton) hasn’t been short of lately.

The global pandemic, a growing-up spurt, and a much-publicised fall from grace have transformed Slowthai’s approach not only to his music, but to the world – resulting in his second album, TYRON: a moving portrait in two parts, of a troubled artist in a state of transition and turmoil. And he’s the first to acknowledge this change.

“I’m doing grown-up things, like looking at settling down, and not getting drunk,” he grins, almost shyly. “Just living life, I suppose.”

The self-titled album is an honour usually reserved for debuts – but Slowthai’s decision to title his new project after his own birth name is fitting, as a reintroduction of sorts.

“I was going to call the third one TYRON,” he tells me. “I had another name for this one. But because of where we’re at in the world, and where I was at in my head, I felt like now was the right time to do it. The reason I called it TYRON is because it’s about people getting to know me, rather than Slowthai. People know Slowthai from the internet, or whatever. And that’s as much as they get to know.”

With the poignant ‘feel away’ (dedicated to the memory of his younger brother Michael John) released as the project’s first single, TYRON has exposed a more vulnerable side to Slowthai’s artistry from the get-go.

“It’s softer,” he nods. “I feel like I’m getting older – I’m at a different point in my life. On the last one, I told people the story of where I’m from, and what my upbringing was like. But on this one, it’s more about where I’m at now, who I am, and how I feel. I was at a low point, and that’s all I had to talk about.

“I could’ve been like, ‘Yeah, I’m travelling here, I’m on a fucking plane, I got girls!’” he laughs. “But that’s not me. I’m not about that, and it seems kind of bland. All I have to talk about is how I feel.”

Artists like Slowthai, who has been open about both his experiences with ADHD and his childhood trauma, are often praised for being ‘boundary pushing’ – with their outlandish behaviour promoted and egged on by the media, who gleefully ask: ‘Just how far will they go?’ But, there is a line that’s not to be crossed – and when an artist does take that leap, the vitriol soon follows.

After waving an effigy of Boris Johnson’s severed head during his Mercury performance, and calling the Queen a “cunt” in the opening track of his debut album, Slowthai finally crossed that line at the NME Awards in February 2020. His controversial interaction with comedian Katherine Ryan, followed by an altercation with an audience member who accused him of misogyny, sparked a fiery online reaction as the footage went viral. To make matters worse, Slowthai was there to receive the award for Hero Of The Year.

“What started as a joke between us escalated to a point of shameful actions on my part,” he wrote in his open apology to Ryan on Twitter. “I want to unreservedly apologise, there is no excuse and I am sorry. I am not a hero.

“To any woman or man who saw a reflection of situations they’ve been in in those videos, I am sorry,” he added. “I promise to do better.”

Facing up to his demons on TYRON became all the more important, in the wake of this backlash and criticism.

“A lot of people believe I was acting that way because that’s who I am – that I was ‘showing my true colours’,” he reflects now. “But I was already in a bad headspace before any of that. In life, when shit’s going a certain way, and you’re on a downward spiral, it’s like being in self-destruct mode. You feel bad fucking everything up, so you do anything that might make it feel better – even though it’s never going to do that. That’s why I was drinking a lot, and I was taking too many drugs. And that was just the straw that broke the camel’s back. I was like, ‘Fuck it’.”

As Slowthai worked through his own personal issues, he also had to face the wrath of countless strangers online.

“I think that people take things the wrong way,” he argues. “I always believed in humour. I watch comedy a lot – and I’m an advocate for good jokes and bad jokes. Some things are just funny! Obviously I understand the seriousness of stuff, but sometimes, I believe we have to take things with a pinch of salt, and see them for what they are – rather than try to make it into a hundred thousand other things.

“I understand how things can be offensive to people who’ve either lived a situation, or have felt in some way vulnerable to those kinds of things,” he continues. “But being someone who stood against all that stuff, and then to be cast out for a joke between a comedian and an artist that’s drunk at an award ceremony where they’ve never been, and never won anything… Come on. That’s why there’s a song called ‘CANCELLED’ on TYRON. It’s not so much about that situation, but about the whole culture of cancelling people.” 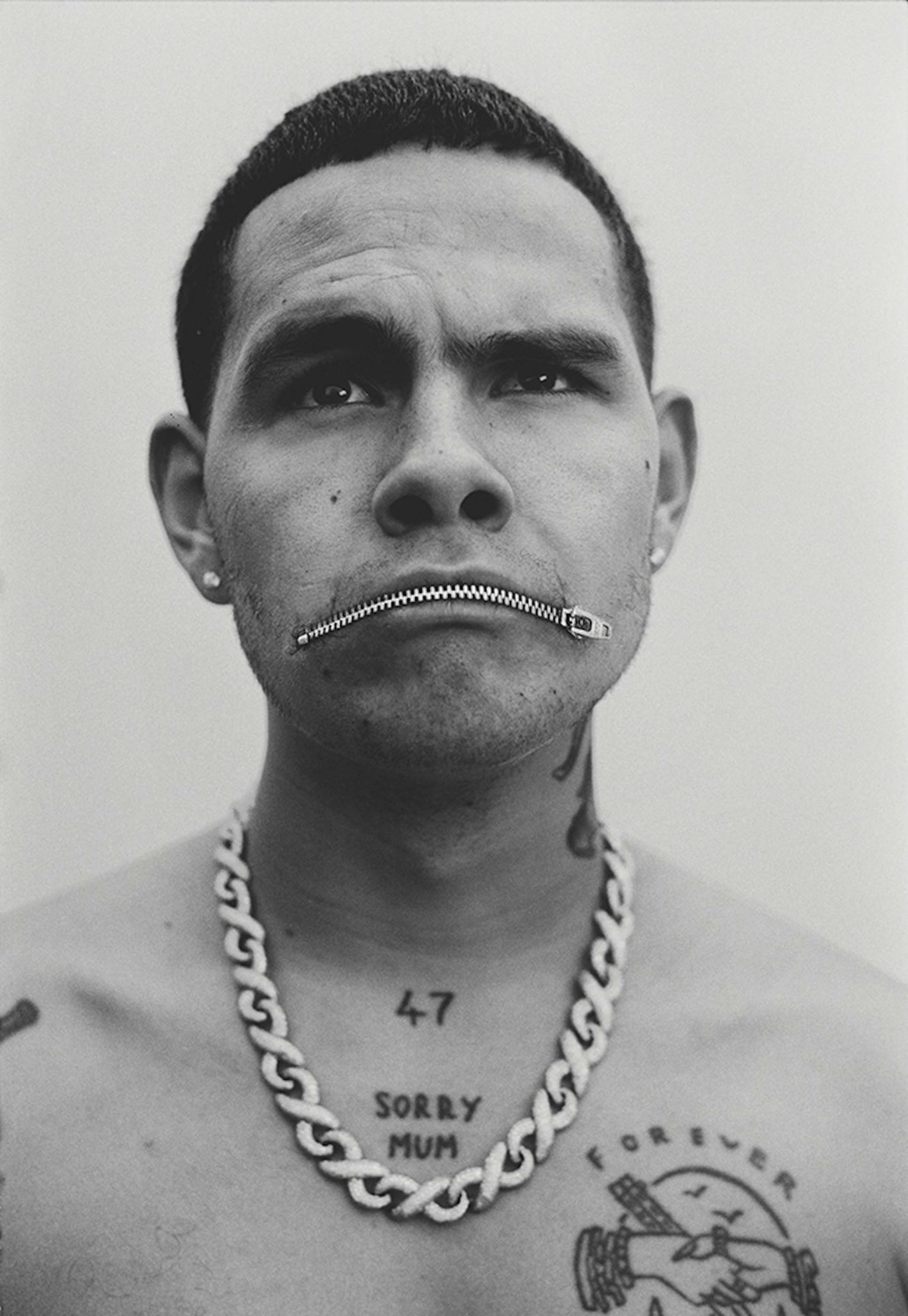 While accountability is important, there’s an inherent double standard when it comes to both cancel culture and celebrity culture – where the same people who support mental health awareness, will also slam celebrities online, as though they fail to see them as real human beings with their own struggles. As evidenced by TV presenter Caroline Flack’s tragic suicide, which occurred the same week as Slowthai’s appearance at the NME Awards, the consequences can be fatal.

“I’ve learned from growing up that life’s full of contradictions,” Slowthai posits. “You can’t just focus on other people, without dealing with your own issues. There’s people who are constantly on the internet – watching all these things, and being an advocate on the internet. If you’re someone who actually goes out and gets involved, and speaks on it, then I can hear you out. But those aren’t the people that target you with aggression – they’ll try and show you, or teach you, the reason you’re wrong.

Slowthai’s controversy also plays out within the wider context of the UK’s deeply entrenched class system – in which people love to consume working-class entertainment, but often judge it by detached, middle-class standards and values. And while spectators enjoy watching artists like Slowthai rising up out of council estates, they also want them to know their place.

“It’s like being told, ‘You only belong in this fragmental society, and this is your position in life. You’ll never be another more than this’,” he notes. “And this is the worst thing: there’s success, and then there’s being successful – and then, even when you’re a billionaire, I bet there’s still people above them going, ‘You’re nobody’.

“When you become an artist, and you get renowned for that, you’re only ever an artist – that’s as good as you are,” he continues. “You could have an understanding of everything, and be doing things that change the world – but then when you go into a different pocket, people are like: ‘You’re just this guy. No one takes this guy seriously’. It’s like you’re just a dancing monkey. They’re like, ‘Give him a microphone and let him dance’.”

Despite his famed braggadocio, Slowthai’s words reflect deep-set insecurities that he’s hinted at through his music, particularly on TYRON.

“No matter how successful you get, there’s always going to be someone who’ll look at you, and think, pffft,” he resumes. “You don’t dress the same. You may speak the same language, but you don’t speak the same – you don’t have the right vernacular and skills to speak with the proper tongue. It’s fucking mad, and it’s belittling – because you can do anything, and there’s still going to be someone telling you that you’ve not done enough.”

Of course, considering the level of his success at 26 years of age, many would argue that he’s achieved plenty. Boldly breaking down long-established definitions of genre, Slowthai brings a fresh punk energy and ethos to the traditional title of ‘rapper’. As such, he’s earned a reputation for his ability to collaborate with anyone – with a CV that includes work with Gorillaz; Mura Masa; Tyler, the Creator; James Blake; A$AP Rocky; Aminé; Skepta; and Disclosure, to name a few.

He’s also found time to strike up a friendship with Dublin’s own Soft Boy Records – bringing Kojaque and Luka Palm on tour in 2019.

“I love Luka!” he gushes. “Them boys are funny! When we were on tour, we took mushrooms, and we were tripping – in Hamburg, I think. Kean, Luka and Kojaque were there with us. We were all on a mad one – riding around on scooters, doing dumb shit. We thought everyone in the whole word was tripping – but they must’ve been looking at us like, ‘These are fucking idiots...’ They’re really good lads. Every time we come over, they’re there with us.”

As well as frequent gigs on this side of the Irish Sea, Slowthai reveals that his connection to Ireland runs a little deeper.

“Yeah, through my dad’s side, in Cork,” he tells me. “But I couldn’t fucking tell you anything about it. I know my Auntie Aileen lives in Belfast. I don’t really come over for family visits. Maybe I need to...”