The Receipts: The Story Behind The Debut Album That Took Over 25 Years To Record
Peter McGoran

Following a 30-year wait and a rather extended break on the way, Dublin band The Receipts have finally released their debut album. With a launch gig in The Blue Light on the way, along with producer Gavin Ralston, the band sit down to talk to about the irresistible lure of Rock’n’Roll, how fate played its hand – and making youthful dreams a reality.

The Blue Light Pub, just over five minutes from Sandyford, sits at the foothills of the Dublin Mountains and offers a stunning panorama of Dun Laoghaire harbour, the Poolbeg Chimneys and the broad sweep of south Dublin. Notable for good pints and warm service, the pub’s extensive food menu consists of ‘Ham and Cheese sandwiches’, ‘Cheese and Onion Crisps’, ‘Dry Roasted Peanuts’, and variations of these sumptuous dishes!
Depending on who you’re chatting to, The Blue Light is a former outpost for rebel soldiers during the War of Independence, a sanctuary for hikers returning from walks up the Dublin Mountains Way, or a haven for local musicians.
Hot Press is here for the latter reason.

It’s a Friday afternoon, and we’re in the company of local band The Receipts. Formed in the late ’80s as a no-nonsense rock/power pop band, The Receipts had a string of successful live performances and support slots over the years, and had penned a few albums worth of material between the years 1989 and 1991, before real life took over from the music and forced them to dissolve in the early ‘90s.
“We were school friends from Ballinteer,” says Karl McDermott, lead singer of the band. “We were just local lads getting together. We weren’t very good at the start, but we played a few local gigs. My next-door neighbour had told me about this bloke up the road from me. He said, ‘He’s a drummer. Why don’t you head up to him and bring your guitar?’ So myself and James Brady – the drummer – we sort of hit it off. Then Ronan [who joins us at the bar] came onboard.
“We knew of another local lad from Broadford, Paul McDonnell, who played in a band in Ballinteer House,” Ronan Clinton reminisces. “We nabbed him from them and he joined us. It was just local lads from two or three local housing estates.”
Unusually for bands looking to get on the gigging circuit at that time, The Receipts steered clear of doing covers and stuck to writing their own lyrics.
“It was all our original stuff, right from the get-go,” Karl nods. “We didn’t do any covers. When I met James he was writing good songs, so I said, ‘Ah, I’ll have to do better than that!’ I thought, ‘Well, if I’m gonna sing, I might as well sing my own.’ So we’d write songs, the two of us. This album that we have out now is a collection of songs that we’d written from that time.”
Despite being a promising band (they gave a memorable performance on RTE’s Jo Maxi show all the way back in 1992), their teenage dreams gave way to reality before they could even think of properly releasing anything. 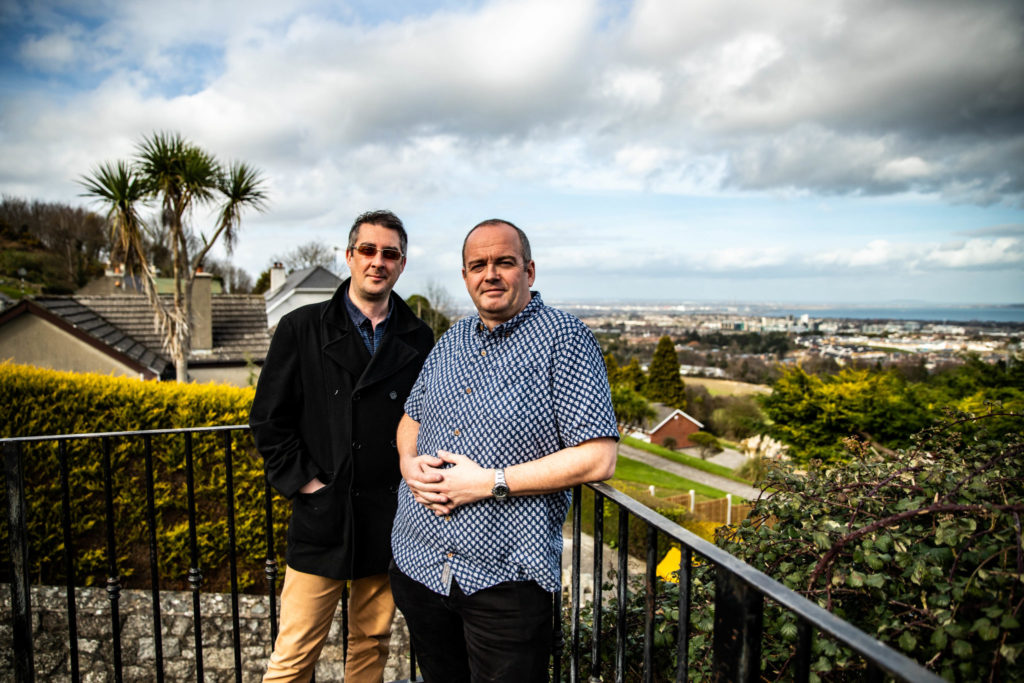 THE REUNION
Reality meant not doing music. Not being in bands. Karl spent a large part of the ’90s in America where he didn’t play a note, while Ronan went back to college and set off on a career. But in a roundabout way, musical stagnation eventually gave way to a semblance of financial stability, and, as it happened, the four members of The Receipts have found themselves living in close proximity to each other in recent years.
“A few years ago we realised we were all in the same place,” Ronan explains. “We were all living close by, so we thought, ‘We have to play music.’ It was that feeling – you know when you meet an old friend and it feels like you’re picking up on a conversation you had yesterday?”
Able to gift themselves with better equipment and with the time to iron out a batch of their old songs, The Receipts found that, after a few rehearsals, they didn’t sound half bad…
“It was like hearing ourselves playing in tune for the first time!” Karl says.
Ronan laughs. “Thinking to ourselves, ‘Jaysus, we’re not as bad as we thought.’”
“We really thought, ‘We have to give these old songs a run,'” Karl says earnestly. “Because not everyone survived the last, what, 25 years or so? People we knew had moved on. Some had stopped playing music. People we’d known had passed on. And yet here we were, still sounding as tight as ever, so we knew we had to do this.”

The band have currently taken up a Thursday night residency at The Blue Light for a series of gigs which are always blistering affairs. But there was an insatiable dream that they’d had for over 30 years – that of making an actual, physical record – which they needed to bring to exuberant life.
Thankfully, they had a friend in the multi-instrumentalist and producer Gavin Ralston, a man whose glittering career has seen him working and performing with everyone from The Waterboys and Clannad, to Vanessa Williams and Michael Flatley.
“I grew up right beside the band,” says Gavin, joining us in the bar with an arm wrapped around his proud young daughter. “I would’ve known The Receipts growing up. When I heard they were doing a record, I was interested. And the amazing thing is that we’re all in our late ’40s, but the passion they have is the same as they had in the ’90s.”
That quality shines through on the album, which was accorded a rave review in Hot Press, penned by Pat Carty. It is a fiery, passionate and hugely impressive thing indeed. Taking its cue from the likes of The Beatles, it has ’60s rock and power pop at its heart. There’s no guitar heroes here, just 10 songs with serious riffs, boundless energy, sharp lyrics – and all put together by four musicians who gelled in the studio like they’ve never been apart.
“We set it up live,” Gavin explains. “There was none of this ‘click track’ thing. Everybody played live. Within the first day we had about five or six songs down. I’ve been a producer for that many years, I’m thinking, ‘This is great! This never happens.’”
The album, titled The Receipts , ultimately sounds like the dreams of young men coming screaming into the present. The band are immensely proud of it, as is their producer.
They’ve also made the collective decision not to go down the Spotify route with this one. Thirty years of music has enabled the band to see what can happen when streaming sites and the big wheels of the music business set up their stall in a way that works against the interests of musicians and bands. They’re also not shy about asking fans of their music to pay to hear them live, or purchase physical copies of their vinyl.

Whatever way you slice it, they’ve done something right. The Receipts debuted at No. 1 on iTunes on the day of its release… 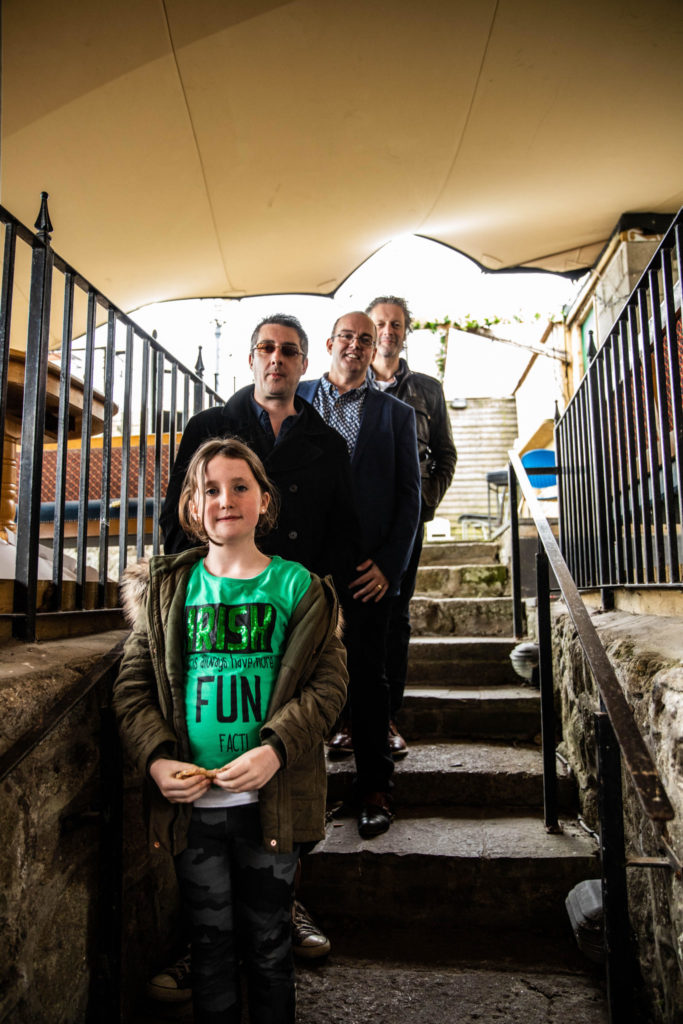 THE GIG FOR GAV

So, there was no record company A&R manager to answer to. No time-lines except their own. After twenty five years of waiting, this felt like freedom. But life has a way of throwing grit into the machine. The journey to the band’s debut album had its own bumps, with Gavin Ralston having to stop production at one point to undertake serious treatment for bowel cancer.
“I was in hospital for four months,” says Gavin. “I remember texting the guys saying, ‘I presume you want to do this with someone else now?’ But they said, ‘No chance of that, we’ll wait until you’re ready.’”
Ronan smiles. “It was always said, ‘We started it with Gav, we’re finishing it with Gav.’ We knew about Gav’s illness, we knew it would be a start-stop process, but that’s how we wanted to do it.”
Hot Press is in danger of getting a bit glassy-eyed at the genuine camaraderie on display here. But becoming sentimental would be in sharp contrast to Gavin’s impressively buoyant energy. He refuses to let the illness affect him. Both Gavin and the band are now more focused on their album launch gig, which is taking place at The Blue Light, in Rathfarnham, on March 29. While their residency in the legendary bar is still a firm fixture, this unique show is set to be their biggest gig in over 25 years.
“The Blue Light are using it to showcase what is effectively a new venue,” Ronan explains. “So for the 29th, we want to have everyone together to launch our album. We were going to do a mini-tour after its release, but trying to manage diaries proved to be very challenging. So we just said, ‘We’ll have something big here. A celebration of our music.’”
That particular gig will run just before a sold-out ‘Gig For Gav’ at Vicar Street on April 1, which will see the likes of The Waterboys, Mundy and PictureHouse come together to raise funds for the significant medical costs Gavin has been lumbered with.
“This gig on March 29 was sort of unrelated,” says Ronan, “but because of the timing we thought to ourselves, ‘Let’s make this the gig before the Gig for Gav.’ The other one’s sold out, but because this is a special night for us – we’re saying, ‘Come to the gig at The Blue Light as well.’”
On the night, The Receipts will play with support from two Dublin bands, Silver Fox and SP Mullen & the Feel. It will mark a high-point in their career to date. All that’s left to ask is – what’s the next step for the band after this?
“There’s a few ideas that we’ve discussed,” says Ronan. “If we can arrange the timing, we would like to go back to Abbey Road. It was a phenomenal experience. We didn’t get into any of the studios while we were there because there was people working in them, so we thought – the only way to get in is by booking time there, so that’s what we did! And now we might as well use it.”
Karl nods, saying simply: “I genuinely think we’ve got it in us to make a great second album.”
One thing’s for sure: there’s no point in stopping the train now!

• The Receipts play The Blue Light on March 29. To buy their album go to thereceipts.ie. For more information on The Blue Light Pub go to bluelight.ie

Live Report: And In The End with The Bootleg Beatles & The UCD Symphony Orchestra, Bord Gáis Energy Theatre, Dublin
Tones and I's 'Dance Monkey' is Ireland's longest reigning No. 1 by an Australian artist this millenium
The Beatles Release Here Comes The Sun Video
On this day in 1969: The Beatles release Abbey Road
Unearthed recording reveals: The Beatles planned another album
'The Beatles: Hornsey Road' Show Will Celebrate the 50th Anniversary of Their Final Album This Fall
We use cookies to ensure you get the best experience on our web site - by using this web site you consent to our use of cookies. Read more »