The singer's second release of 2022 is accompanied by a fantastical visual - a perfect marriage of kitschy track and joy-filled video.

Former Saucy Monky member Cynthia Catania is back with a new tune 'Something Better', with the accompanying video premiered today by Hot Press.

The clip was directed and edited by Sue Ann Pien, who also covered cinematography and stars in the video alongside Catania herself and Eva Rae.

Partially filmed at Los Angeles Center Studio (thanks to Charlie Nguyen, who covered drone cinematography), 'Something Better' sees Cynthia and company make bridges their running tracks, ending up in a police station, and eventually a morgue. The playfulness of the video is a perfect accompaniment for this track which asks the existential question - what more do we want from life? "Why do we run?"

The joyful, kitschy track leads with light percussion, soft electric guitar, and Catania's dreamy vocal. Building to a climactic grunge filled pinnacle, this track is perfect listening for a sunny evening, driving down the coast - at full volume of course.

Speaking about the highly-anticipated track, the musician said: "I remember a conversation I had with an old girlfriend about her bestie. How he was happy in his relationship - but always wondered if he should ‘settle’, what if there was something better out there?” Such is the human dilemma… and the challenges of commitment.

"I guess for me the deeper meaning of this song is to surrender to the present moment, circumstances, relationships, work-life, and ENJOY. The root of suffering is in the craving. Surrender is a way out. I have to practice that on a daily basis." 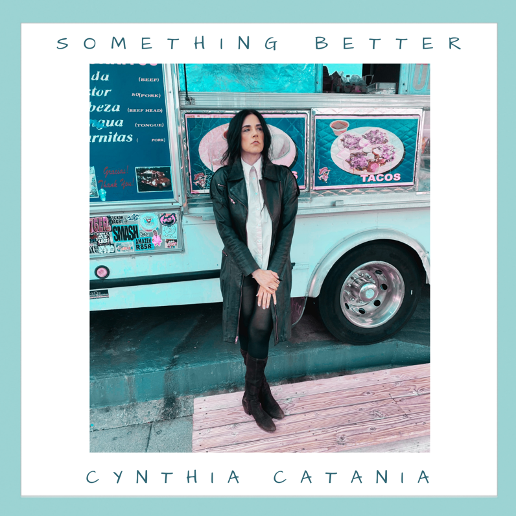 Artwork for 'Something Better' out August 12.

Catania explains her process of creating the track: "I wrote the refrain 'Everybody wants something better than they have' and bounced it off a few different songwriters I like to collaborate with. Jason was a resounding yes - and we bounced lyrics and melodies back n’ forth from there. It came quickly and easily. Romance, finance, and status — everyone struggles with those aspects of living from time to time.

"As a producer, I love keeping things minimal and interesting. Anytime a deeper message can be tucked into a pop song, it’s a win-win. I am so grateful for my production mentors - Rob Cairns, Doug Heffernan, Michael James, and now, Gabriel Mann."

'Something Better' is heavily influenced by artists Lana Del Rey, Billie Eilish, Loma, Orville Peck, and the sparser tracks they've released. "Lana is a fav. What a brilliant lyricist she is," the singer adds.

Previously sharing festival stages with The Cure, B-52s, PJ Harvey, PINK!, Wilco, and more, alongside her previous musical partner Annmarie Cullen in their since retired band Saucy Monky, Catania has established a name for herself in the Irish music scene. Catania spoke about Saucy Monky and more in an interview with Kate Brayden earlier this year.

Receiving raving critical acclaim since beginning her career as a solo artist, 'Something Better' marks Cynthia's second single release of 2022, her fourth year as a solo act. Yet to release an LP or EP for that matter, Hot Press is excited to see what's to come for this super talented musician.

Check out the video for 'Something Better', which officially releases on August 12, below.

PREMIERE: Cynthia Catania shares California desert-filmed video for 'Frames'
New Irish Songs To Hear This Week
Cynthia Catania: "I have the fondest memories of Saucy Monky’s heyday. We get asked to reform for an Irish tour all the time"